THE 'ORRIBLE 'OUSE OF TERRIBLE OLD TAT - The Magic of Merlin 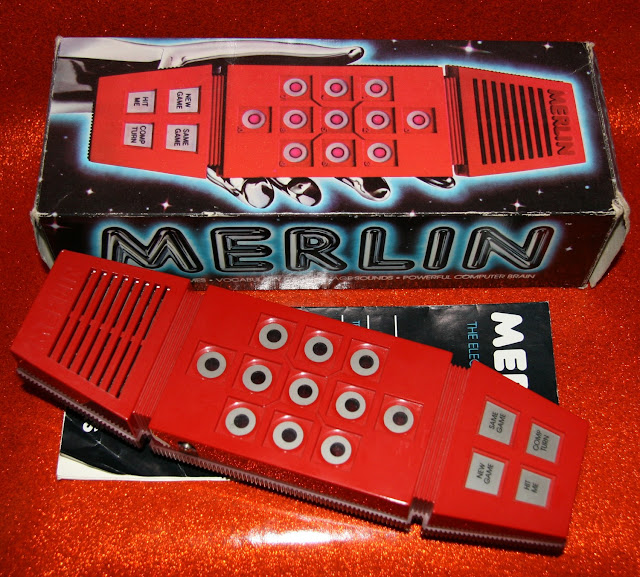 After a somewhat longer than intended Christmas break, welcome dear fiends once again to the crumbling edifice packed with shite that is the 'Orrible 'Ouse of Terrible of Tat! Now then we were last rummaging through this curious collection of pop culture empherea, we had been looking into the ancestry of modern video gaming, specifically the assorted handheld devices that called themselves "electronic games". Now these weren't pocket-sized versions of popular arcade classics - for those would come a little late - but rather in the late '70s there were gadgets using circuits and microchips to make games that could play themselves with you.

The first superstar of this genre, so popular that it's still around today, was Simon, whose history we charted last time. However Simon wasn't the only kid on the newly built electronic block, for venerable game makers Parker Brothers also had seen the toy potential at the dawning of silicon age. And so in the run-up to Christmas 1978, Simon was locking horns with another bunch of microchips and flashing lights in a plastic case - Merlin!

Now despite its name Merlin was not born of the Round Table or cooked up in Camelot, but rather was the brainchild of Bob Doyle, a former NASA engineer, which gives this space-age toy a truly space-age pedigree. Assisted by his wife Holly and his brother-in-law Wendl Thomas, Doyle came up with a device that looked like an over-sized red phone handset studded with eleven buttons that lit up when pressed thanks to inset LEDs. However despite not looking quite as colorful as Simon, Merlin had more than a few tricks up his electronic sleeve, and could in all fairness, quite rightly claim to be a magical marvel of microchippery. Milton Bradley's circular smart-arse might have been heavily marketed as an electronic brain that could think for itself and play against you, but despite looking like a relative of R2D2 who had been flattened in the Trash Compactor, Simon was pretty much a one trick pony. Oh yes, he might have been a clever little bastard, but when you came down to it, he only knew one game.

But Merlin could offer kids not one, not two, not even three, but a whopping SIX different games. And they really were six different games, and not just variant modes of a basic either. Indeed Merlin could convincingly claim to be a whole toybox in electronic form. And the full line-up of electronic delights conjured up by Merlin goes like this...

1) Tic-Tac-Toe - or Noughts and Crosses as we in this septic isle more commonly call it. Yes, it is as old as the hills, but it is still a classic, and now you could play it against a computer! OK, that doesn't sound terribly thrilling now, but back at the end of the '70s playing a game against a machine was something previously only seen in the realms of SF.

2) Music Machine - Now technically speaking with wasn't a game as such, but more an activity. In this function, Merlin became a primitive synthesizer, with each key on its pad playing a different note. You could program a tune of up to 48 notes and rests - not huge scope there admittedly, but all the same pretty impressive for a toy back then. Certainly there was memory space enough for Merlin to be used as an early sequencer!  The instruction manual also came with some well-known tunes, including tunes as diverse as Beethoven's 9th and Auld Lang Syne, transcribed into ready to program number sequences. 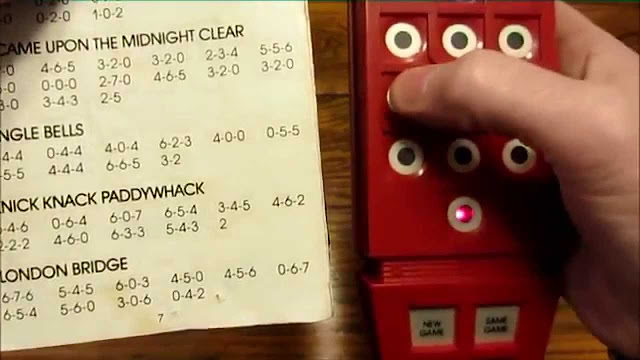 3) Echo - Basically Merlin plays a tune that you had to replicate on the keypad. Yes, very like Simon, but accounting for the development timelines of both toys, I suspect that Doyle and co. had also seen  Atari's Touch Me and, like Simon's creators thought, they could do better.

4) Blackjack 13 - fairly self-explanatory, Merlin plays the dealer for an electronic version of  the famous card game. No gambling involved of course!

5) Magic Square - In this Merlin devised a pattern that the player must deduce from which lights come on or go off when certain keys are pressed.

6) Mindbender - In this game, Merlin ask you to decide deduce a random number - essentially it is an electronic version of the old game Cows & Bulls which earlier had inspired the creation of another best-selling 1970s game we've chatted about before, Mastermind (see here for more details). However the neat thing here, is that you had the option of setting the size of the number, choosing between 2 and 9 digits.

And for more details on all of these games, you can read the original manual online here.


Unsurprisingly "the Electronic Wizard" (as the marketing dubbed him) more than held his own against Simon and would go on to become the best selling toy in America in 1980, notching up sales of over 2 million Merlins in that year alone. Like his rotund rival, Merlin remained popular throughout the '80s, and saw  re-releases periodically over the years. Also like his electronic chum, there were some spin-off versions too, in the shape of Split Second in 1980, Master Merlin in 1981, and Merlin the 10th Quest in 1996.

Now Merlin is just a piece of gaming history, but being a very robust bit of kit, there are still plenty of working units out there. Of course, these days you can play all these games, and hundreds more, on your phone. But considering the unique and eye-catching telephonic design of Merlin, this computerised gadget wasn't just a pioneer of the computerised play, but in a weird way he was a prophecy of the future of gaming! Truly an Electronic Wizard! 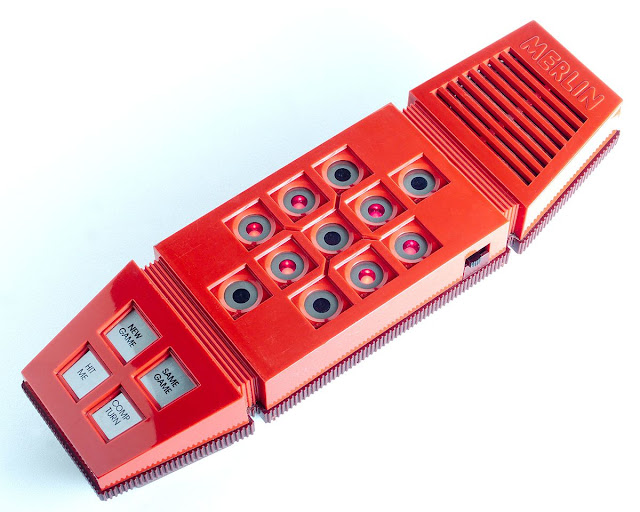 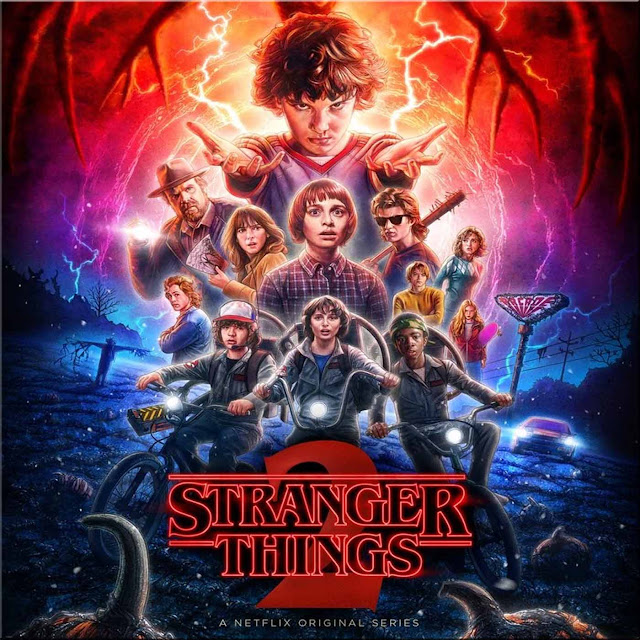 In the second part of our trip back to Hawkins, Jim and Odile continue their in-depth and spoiler-filled discussion of Stranger Things Season 2 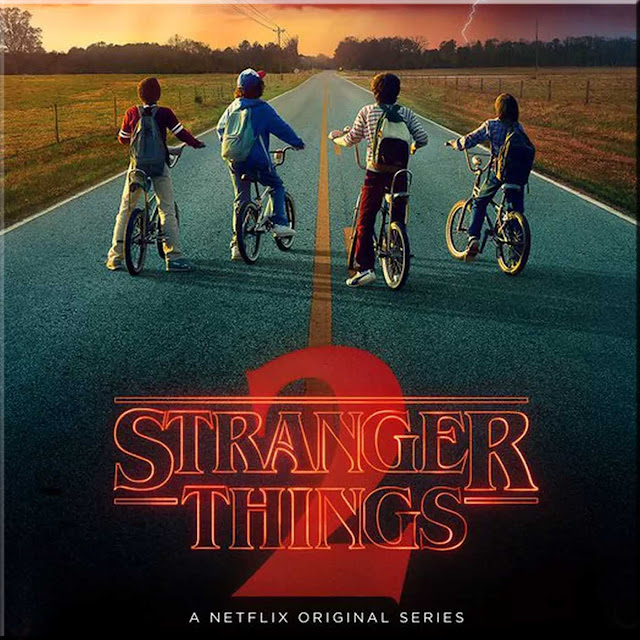 This week we return to the 1980s and the little town of Hawkins to discover what mysteries we discovered there this year! Warning - we are opening the curiosity door and this is a spoiler filled discussion of Stranger Things 2! 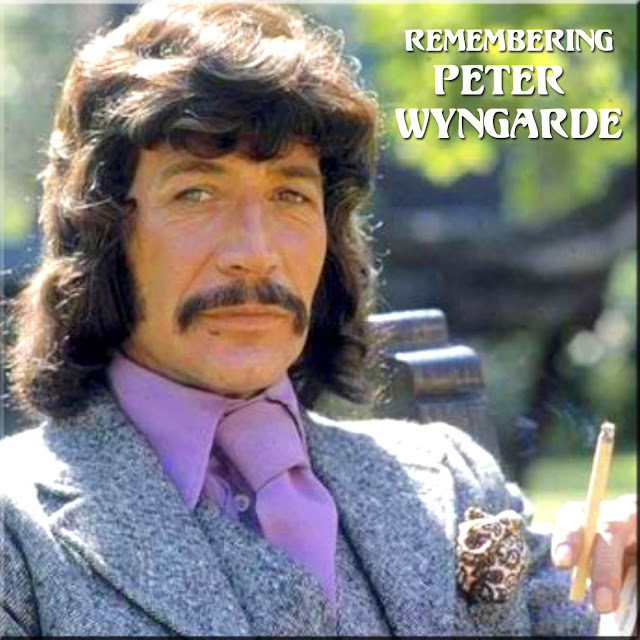 Well dear friends, the Grim Reaper has been at it again! And so, Mr Jim calls you all to the fireside early for a quick bonus episode to pay tribute to the great Peter Wyngarde who sadly passed away this week. 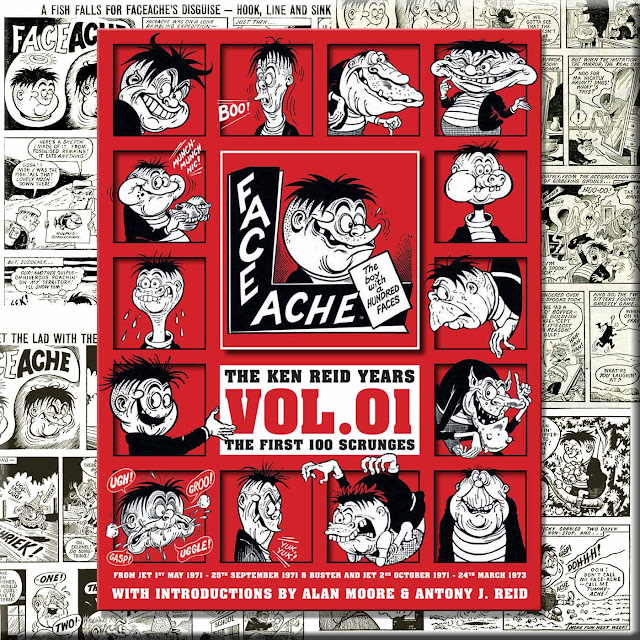 In an episode that didn't turn out so micro after all, Mr Jim Moon takes a look at the latest addition to Rebellion's Treasury of British Comics range - Faceache Vol. 1 - The First 100 Scrunges, a glorious tome collecting the gleefully gruesome adventures of the boy with the bendable bonce as chronicled by the great Ken Reid. 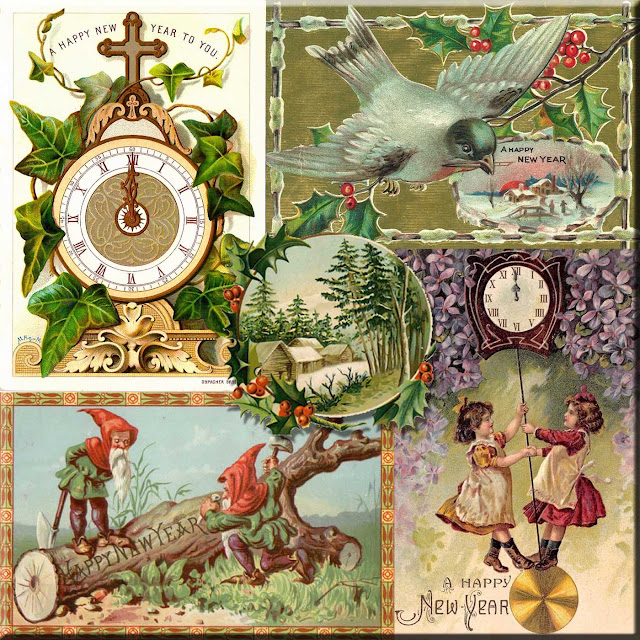 A brand new episode for a new year and on the new hosts! Mr Jim Moon drops in for a quick catch-up to discussing what's coming in the year ahead on the show!