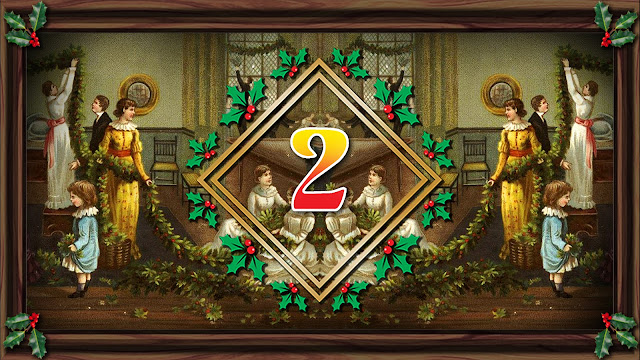 Welcome dear friends back to the Hypnogoria Old-time Yuletide Advent Calendar! Today we are opening Door No.2 and discover what B is for in our festive A to Z! Now there are a fair few candidates for this letter - bells, Bethlehem, Boxing Day or even Bah! Humbug!
More in keeping with our theme of old time traditions and lore is the Boar’s Head Carol which dates back at least as far of the 15th century and celebrates what was once the centrepiece of many a Christmas feast! However I have picked a different B, although one which was to quote the aforementioned old carol was also “bedeck'd with bays and rosemary” and indeed “a gay garland”.
For our B shall be for Bough. In particular the now almost forgotten Christmas decoration that was known as the Christmas Bough, the Kissing Bough or sometimes the Kissing Bunch.
Now we all know how in Victorian times, the German custom of having a Christmas tree was popularised by none other than Queen Victoria and Prince Albert. But the custom of bringing in often large amounts of evergreen leaves and boughs into the home to decorate for Yuletide is a very old one. For example during the Roman midwinter festival of Saturnalia it was customary to send boughs of firs and evergreens as symbols of good wishes for the season.
We also know that many of our more northern European ancestors revered evergreens at this time of year too. Hence when Christmas came along, evergreens were soon part of the celebrations.
However over the years it became customary to have some sort of centrepiece. In some parts of Europe the tip of a fir tree was decorated and hung, point downwards, from the centre of the ceiling, with the triangular shape symbolising the Holy Trinity and radiating good blessings to all beneath. And in some parts of Eastern Europe this upside-side pendant Christmas tree can still be seen! 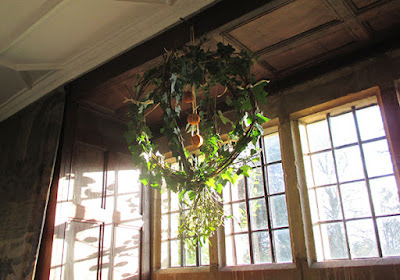 However in Britain from at least Tudor times, the Yuletide centrepiece was the aforementioned Kissing Bough. Now this wasn’t an actual limb of a tree. Rather it was an elaborate decoration constructed around a huge hoop. In some versions this hoop was woven with evergreen of all varieties - holly and ivy and fir branches, but also bay, box, rosehips, laurels and rosemary, and bedecked with fruits and berries, and often candles too, creating a huge crown or wreath that was hung from the ceiling.
Other Kissing Boughs were even more elaborate, built around two hoops to form a massive sphere which was then decorated with the usual suspects. However there was one evergreen that was most important, and indeed is probably responsible for these decorations having kissing rather than Christmas in their names - mistletoe! However we learn of the legends and lore of this iconic plant behind a later door…
With the advent of Christmas trees, the popularity of these boughs began to wane. However it is thought they have survived in smaller forms. For some historians of the festive season have suggested that the more modern tradition of having a Christmas wreath is a descendant of these large festive evergreen decorations.  Plus there are the Advent crowns too, smaller decorations of evergreens and tinsel, which feature four candles, one to be lit every Sunday in Advent, which appears to be a more pious close relation. But the lore of candles and Christmas is a tale for another day and another door! 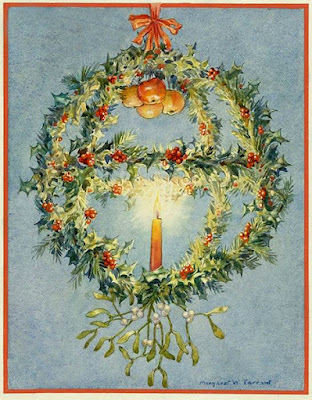 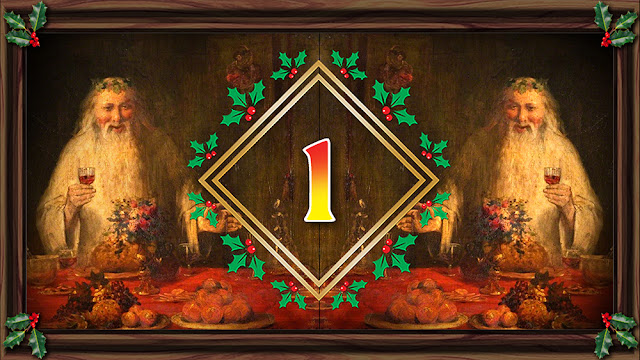 Welcome dear friends to the Hypnogoria Old-time Yuletide Advent Calendar! Every day through the run up to the big day, we will open another door and discover the legends and lore of Christmastide! And what’s more we will be exploring the history and mystery of Yuletide by going from A to Z! So then, we begin, of course with A! Which could stand for angels or antlers, but a more fitting word to explore in this festive journey is, I think, Advent!
These days we think of Advent as being the days in December running up to Christmas Day as exemplified by Advent calendars such as this one. How historically this was not always the case. Slipping back just a few decades or so, Advent was a bit more of a tricky to pin down, as it was marked out by the four Sundays before Christmas Day. Hence depending on  the individual year, Advent may begin as early as 27th of November, or as late as the 3rd of December.
Now it is almost a tradition in itself to moan that Christmas starts earlier every year, however, dancing back a few centuries in time we discover that the festive season began very early indeed. In Tudor times, the official beginning on the Christmas countdown was Hallowe’en, when courts and households would appoint a Lord of Misrule, whose job it would be to arrange and oversee the festivities over the coming months. But we will learn more of these fellows behind another door.
Of course, one may argue that this tradition of appointing a Lord of Misrule was more of a social ritual than the beginning of Advent itself, and indeed it was only observed by wealthier folks. However Advent still did begin a good deal early for the majority of people, and it kicked off in early November with a feast we have now largely forgotten.
We mark 11th November as Remembrance Day, however before the 20th century, this day was already very important, for it was St. Martin’s Day, also known as Martinmas, and it was celebrated with a great feast and marked the official beginning of Advent. 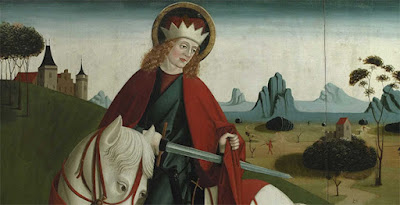 Now Saint Martin, who lived in the 4th century, was a Roman soldier who became a holy man, who performed many miracles, and according to legend introduced the Chenin Blanc grape variety too! Martin loved the rural life, and was so enamoured of living in the countryside, that he hid among a flock of geese in order to avoid being made a bishop. However, the geese, being geese, made such a commotion he was found and got the promotion he had wanted to avoid, becoming Bishop of Tours. And according to legend, that is why the traditional main dish at a Martinmas feast was roast goose. Although whether our forebears were honouring the geese for hiding the saint, or scoffing them as their honking actually gave him away is open to question!
The Martinmas marked the start of Advent with the period between it and Christmas being known as the Quadragesima Sancti Martini  - the 40 days of St Martin. And up until around the 12th century many folks treated these weeks like an autumnal Lent, marking the occasion by fasting - that is to say not eating any meat (although often fish was permitting) and no dairy produce until Christmas Day, whose coming was of course was celebrated with an even larger feast.
And as it ushered in a time of fasting, Martinmas was not unlike another Mardi Gras - it was a day of fun and food, parades and parties. In some areas it was traditional for someone to dress up as the saint and give out gifts of nuts, fruit and cakes to the celebrants. While, fascinatingly in some parts of Germany, a tradition arose where on St Martin's Eve, children would leave out stockings or shoes filled with straw for St Martin’s horse and in the morning discover assorted gifts left in return!
Finally there was also an old superstition that claimed that the weather on St Martin’s Day would predict the weather for Christmas Day, with the rule being the one was the opposite of the other, i.e. if it was mild at Martinmas, it would be icy and cold at Christmas! Or as an old rhyme puts it -
‘If ducks do slide at Martinmas
At Christmas they will swim;
If ducks do swim at Martinmas
At Christmas they will slide’
So then, if you are in the habit of betting whether it will a white Christmas or not, mark down Martinmas in your calendar and then visit the bookies on November 12th! 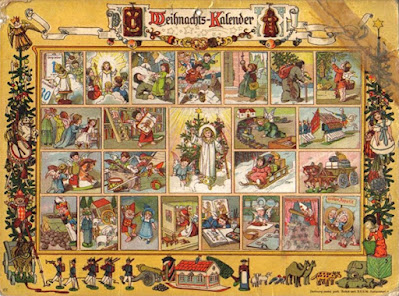 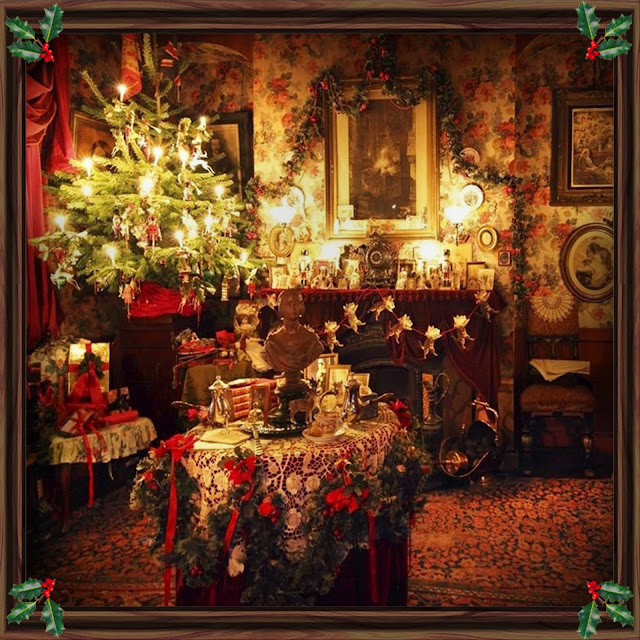 Just a quick round-up of various updates before the opening of the Old-time Yuletide Advent Calendar!
DIRECT DOWNLOAD - MICROGORIA 114 - Another Fireside Announcement