THE 'ORRIBLE 'OUSE OF TERRIBLE OLD TAT #23 - Once Upon a Time in Freezer Far Far Away... 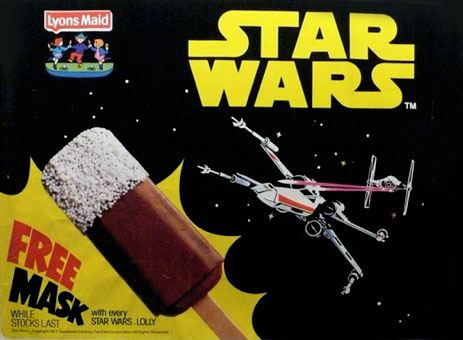 Welcome once again dear fiends to the 'Orrible 'Ouse of Terrible Old Tat! Well, those little brats, I mean, all your little darlings are heading back to school, and hence summer is officially coming to a close. However before autumn begins we've just got time for one last delve in the chiller cabinets of days gone by for a last helping of ice lolly history!

Now then we'd been looking at the rise, fall and the rise again of the branded lolly, that is to say, those icy confections conjured up to bear the name of a popular franchise in the ever-desperate war to prise the pennies out of poppets' pockets everywhere. Now of course, in the late '70s came a property whose branding was legendary and unleashed wave after wave of must-have merch. I speak of course, of the hallowed first coming of Star Wars, that delirious time when while the Force might have been with you, the tie-in tat most definitely was!

George Lucas's homage to golden age SF, that space adventure that out flashed Gordon, didn't actually hit England until the start of 1978. But despite being in the depths of the British winter, Lyons Maid still rushed out a tie-in ice, and hence in February 1978, the Star Wars lolly was released. This was a chocolate iced lolly with a chocolate flavour coating (double choc, nice!) and topped with starry white sugar balls. An intergalactic space taste sensation that could be yours for a mere 10p!

But the magic didn't end there, for this lolly saw Lyons Maid wheeling out a gimmick that they had successfully deployed a couple of years earlier with their King Kong tie-in lolly. But this time said gimmick was bigger and better! For the Star Wars lolly came with a free mask... And not just one mask but a range to collect! And if you did collect them all, and you still have them all in decent nick, well done, as they go for an absolute fortune now! Also the reverse sides of the wrapper featured illustrations and text detailing all the then new and weird looking characters in this exciting new movie. Hence kids could learn who Darth Vader, Chewbacca, C3PO, and R2D2 were, plus get the low down on Tuskan Raiders and Stormtroopers! 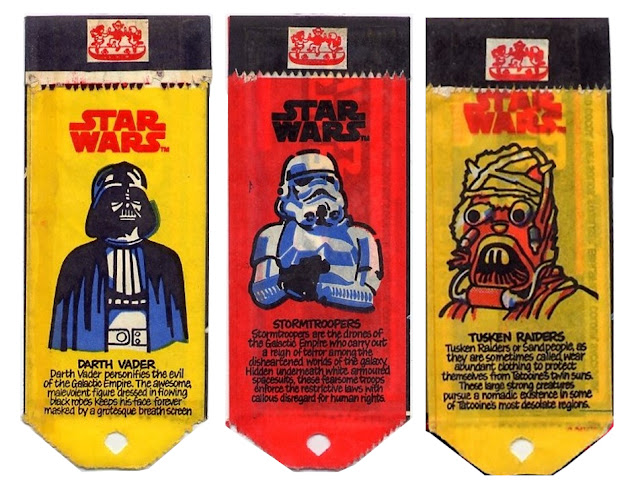 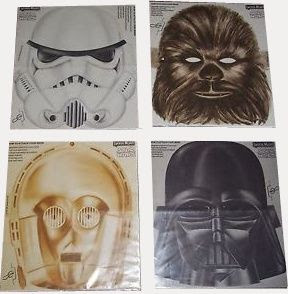 The following year, another blockbuster was touching down in British cinemas during the winter months. Yes, this was quite a common occurrence back then, as generally the UK got movies some six months after their US release in the '70s and early '80s, hence the Christmas/New Year season was when all the big movies came out over here. And once again, despite it not being the season to enjoy in a freezing cold snack, Lyons Maid once again had bagged a big brand - this time Superman: The Movie! Hence in January 1979 Superman lolly flew into the freezers. Priced at 10p, the lolly itself was a very simple cola flavoured frozen juice affair. However its big selling point was that said cola flavoured ice was frozen around plastic sticks that bore the carven likenesses of Superman and his friends and foes! OK, that should be moulded not carved, but you get the idea! Once again there was a range to collect, this time 12 in all, pictured below!

Somewhat less explicable, is the other tie-in lolly we got in June 1979 - the  Happy Days ice lolly. This seems something of an odd choice for branding because by 1979 the show, and indeed Fonzie himself, had already well and truly jumped the shark.  However someone clearly thought it was a good idea, and hence seemingly went all out on the design specs for this lolly. No frozen flavoured ice on a stick here, no sir. The Happy Days lolly promised strawberry flavour ice encasing a chocolate bar centre, and topped with red, white and blue sugar balls. While the spherical sugary topping clearly symbolises the American flag, I haven't the foggiest what strawberry ice around a brown log was meant to evoke. Best not think about it... Anyhow, going for a pricey 19p, the Happy Days lolly didn't last too long, and while it was more ambitious in its construction, in this competitive age you needed a lot more that sugary balls to get ahead. 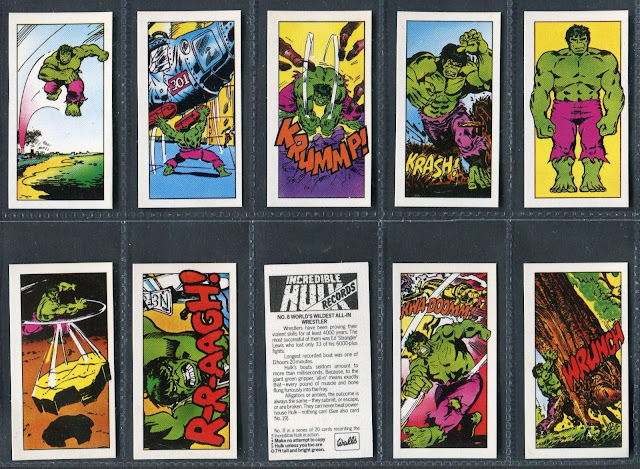 However arch rivals to Lyons Maid, Walls had much better results with their own branded lolly launched in 1979 - the Incredible Hulk lolly! This was a green (natch) ice affair with red/purple sprinkles on top for reasons that have escaped the best minds of our generation. However the main draw was the fact that each lolly came with a picture card showing the Hulk in action and backed with text on his adventures and powers. All in all there were 20 to collect and great fun all round. Certainly it was far more inspiring than the branded lolly Walls released the following year. Seemingly wanting a slice of the blockbuster action, Walls wrangled a deal with Disney for what they both hoped was the next Star Wars. However that movie turned out to be The Black Hole... And I suspect the fact that Walls didn't seem to bother with any cards, masks or send-offs for this lolly speaks volumes about its box office fortunes...

The end of the year however saw Lyons Maid netting another big brand with a Star Trek lolly beaming down in December 1979. Tie-ing to the Star Trek: The Motionless Picture, the lolly was a good deal more exciting than the movie, coming in a tangy pineapple and orange flavour that would at least keep the kids awake. Better still though, each lolly came with a picture card, with 25 different ones to collect. Plus there was a wall chart to send-off for too! . 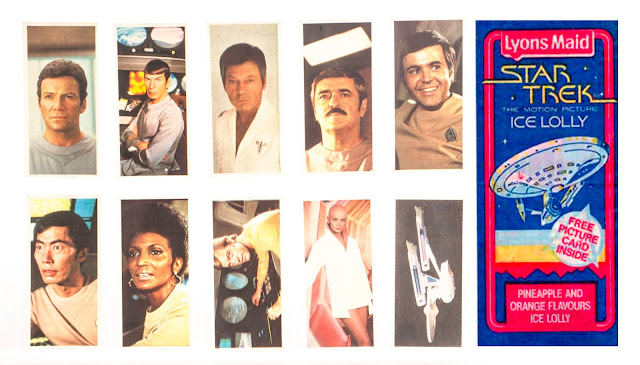 Lyons Maid continued their run of big branded bestsellers in 1980, with May that year seeing the launch of a second Star Wars lolly, this time to tie-in with the just released The Empire Strikes Back. This time we were treated to a toffee and mint lolly stickers with the wrapper's front boasting a scary Vader in flames while the reverse had illustrations and text about six leading characters in the movie - Boba Fett, Darth Vader, Lando Calrissian, Princess Leia, Han Solo, and Yoda. However the fun didn't stop there - for each lolly came with a sticker, with a series of 12 to collect. 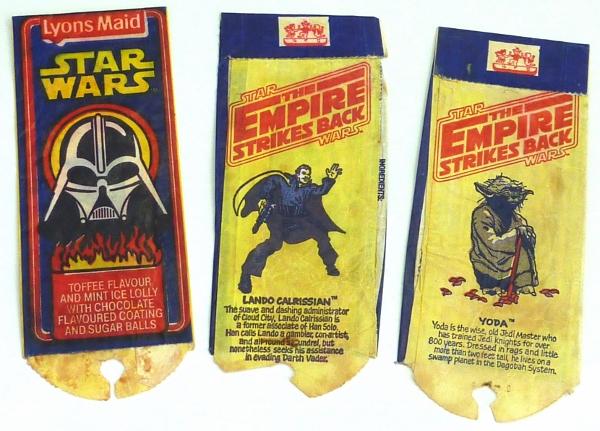 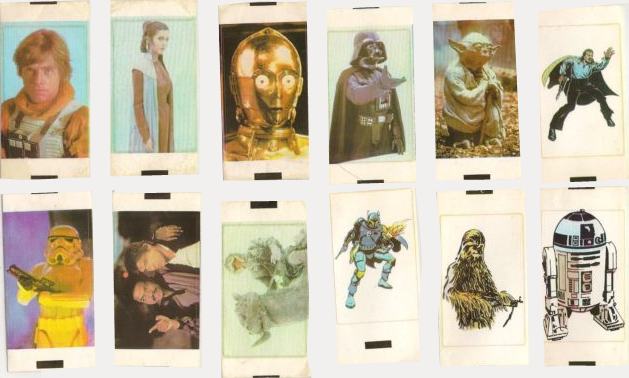 However the end of the 70s were really the last battles of the Great Ice Lolly Wars. And branded lollies and tie-ins started to disappear. For example, after 1980, Lyons Maid only had one venture into the branded lolly arena with 1984's Banana Man lolly, which boasted a chewy toffee centre but that was about it. For sadly at some point in the rightly accursed 1980s, some evil genius realised that all this chicanery to pick the pockets of children was a mug's game. All this tat cost money to produce after all. And who really paid for these lollies anyway? The parents of course! And so, increasingly lollies and ice cream were marketed to grown ups as luxury product. It was the end of an era. And Darkness and Decay and the Red Death held illimitable dominion over all...

OK, perhaps that was a little overly dramatic! But certainly Obesity and Adult Onset Diabetes and Cornettos held held illimitable dominion over all...

It was certainly a more innocent era of tie-in merchandise back then. I remember being in Primary School when they re-released the Star Wars films in cinemas in '97. A classmate had also begun collecting stickers for a Panini album and we were trading our doublers in the playground. He was amazed how I seemed to know the names of all the alien creatures and what the missing stickers we both needed would be of. This went on for weeks, and his enthusiasm for all things Star Wars had not waned in the slightest, hardly a day went by without him appearing with a new pencil case or action figure, so i offered him a len of my VHS tapes. "Do you mean there's actually Star Wars films as well?" he replied.
ST.CLAIRE