HYPNOGORIA 65 - Knight of the Living Dead 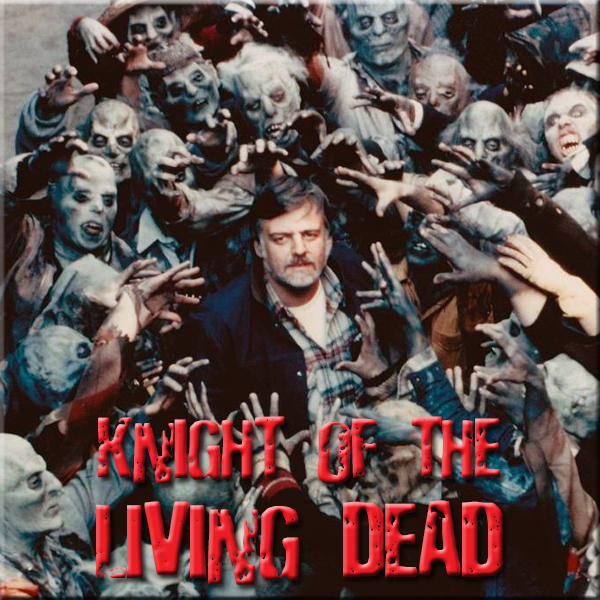 In a special episode, Mr Jim Moon pays tribute to the late great George A Romero, taking a personal trip through the legendary director's many classic movies, chatting about movies such as Martin, Creepshow and The Crazies as well as his famous Dead saga. 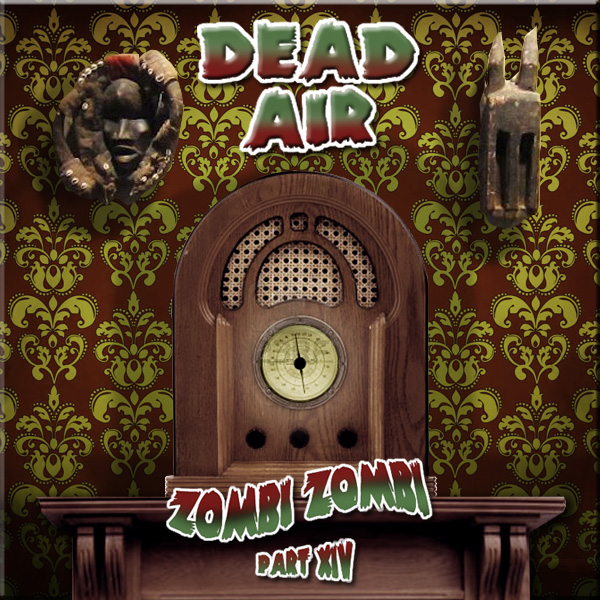 In this episode we discover how the dead walked across the airwaves! In the world of old time radio, a legion of zombies walk in shows like Unsolved Mysteries, Creeps By Night, and Lights Out To compliment my recent podcast -  HYPNOGORIA 63 - Zombi Zombi Part 13 -  on the rise of the zombie in pulp fiction, here's a final selection of covers chronicling the dead walking in the pages of the pulps! 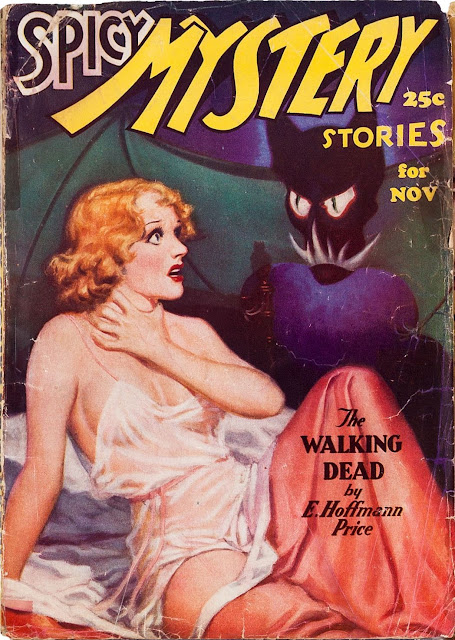 The very first use of this famous zombie title! In Spicy Mystery Stories November 1935 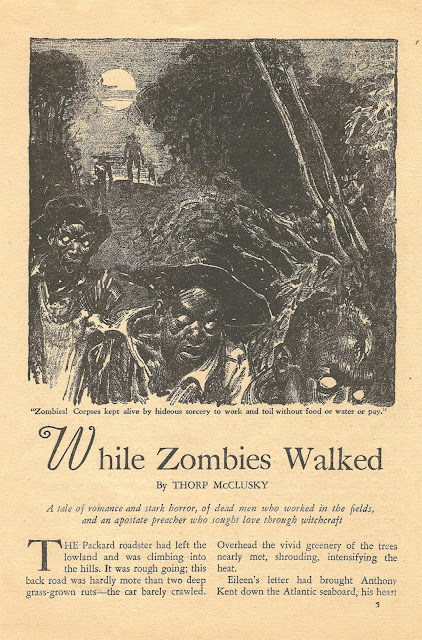 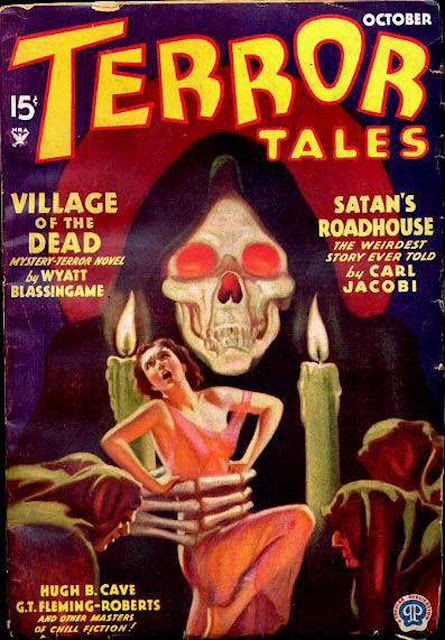 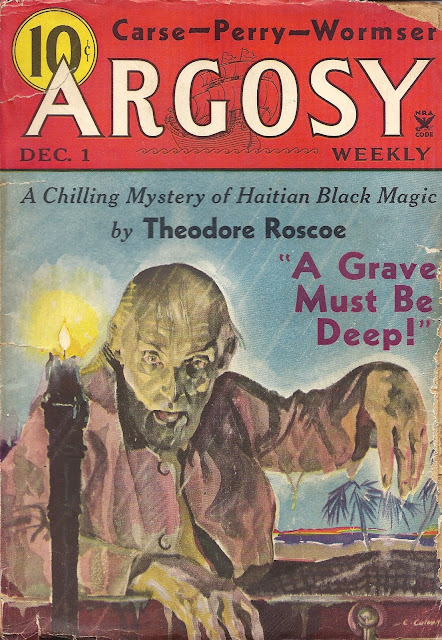 To compliment my recent podcast -  HYPNOGORIA 63 - Zombi Zombi Part 13 -  on the rise of the zombie in pulp fiction, here's a further selection of covers chronicling the dead walking in the pages of the pulps! 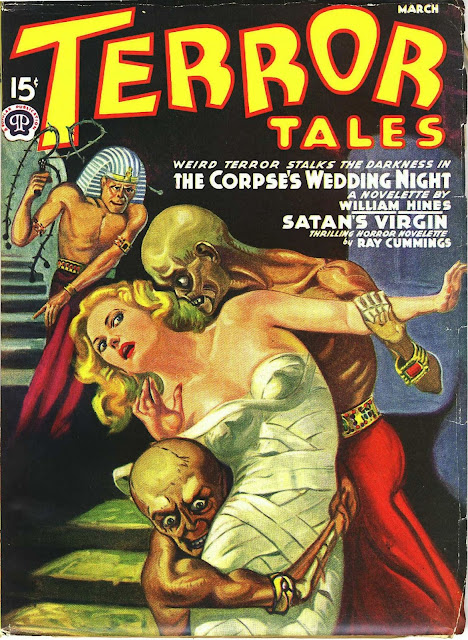 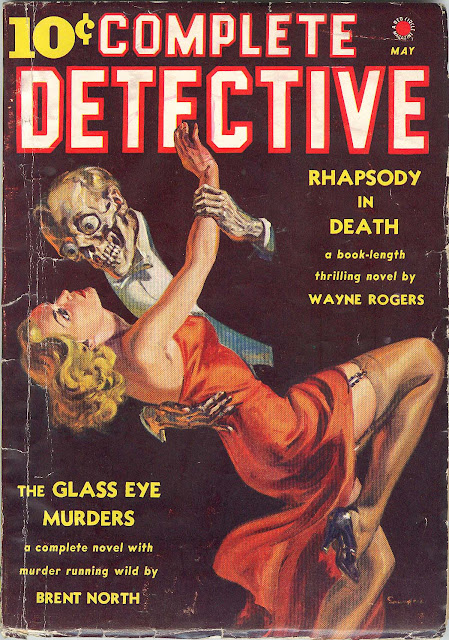 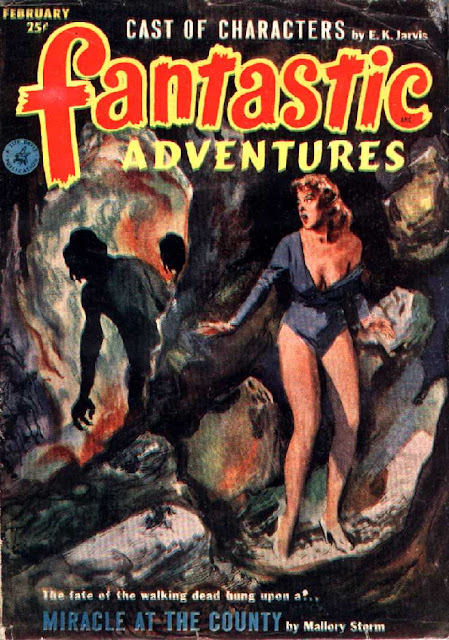 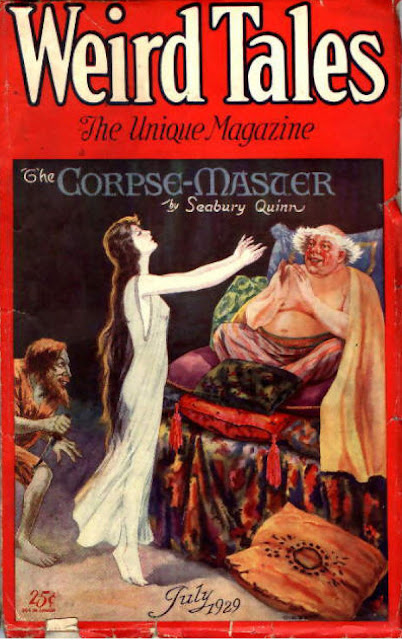 Welcome to a little selection of pulp excess! To compliment my recent podcast -  HYPNOGORIA 63 - Zombi Zombi Part 13 -  on the rise of the zombie in pulp fiction, here's a first of selection of covers chronicling the dead walking in the pages of the pulps! 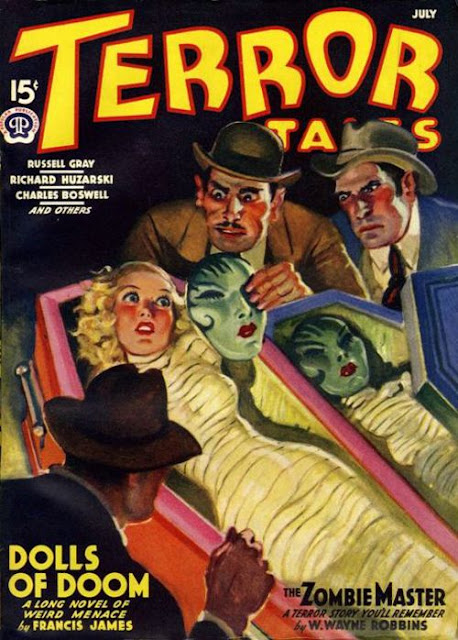 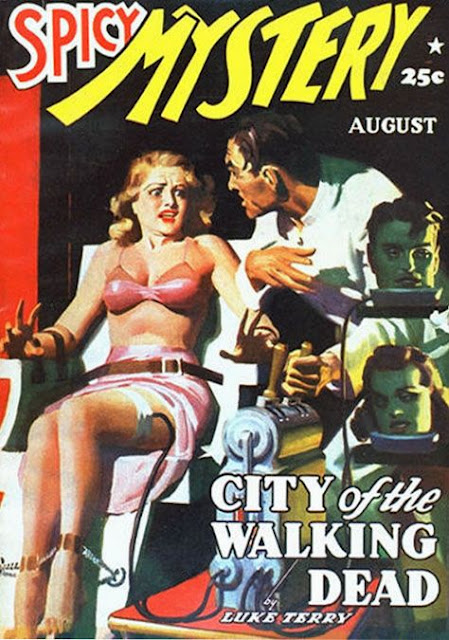 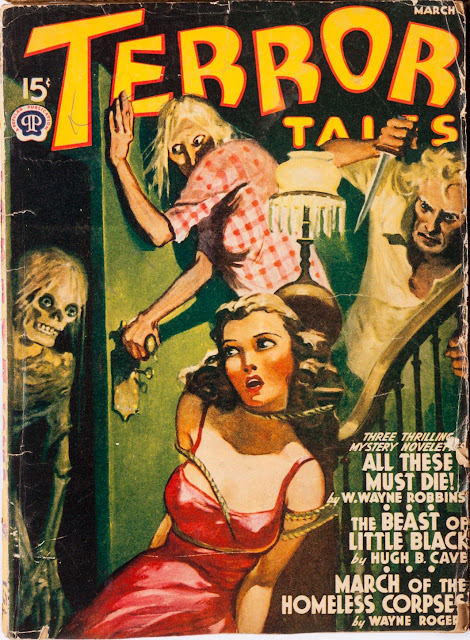 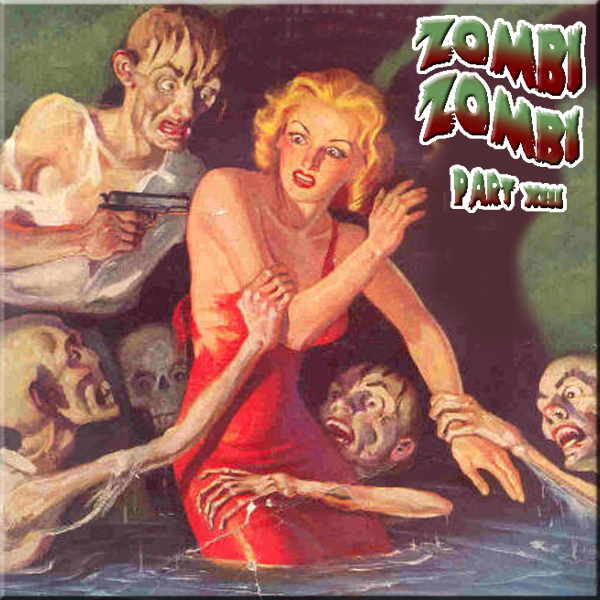 In this episode we chart how the zombie genre was developed extensively in weird fiction, in tales from classic genre writers such as August Derleth, Clark Ashton Smith and E Hoffman Price, and in the pages of the more lurid shudder pulps. 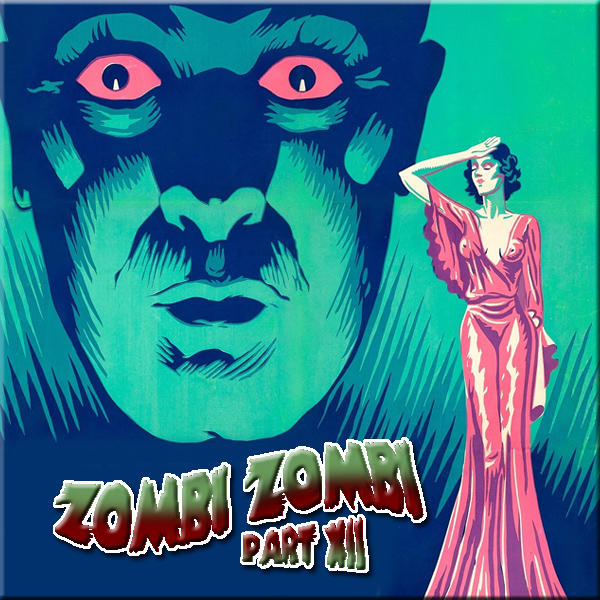 Continuing our history of the walking dead, in this episode Mr Jim Moon traces the development of zombie cinema in the 1930s in movies such as Revolt of the Zombies and Ouanga. 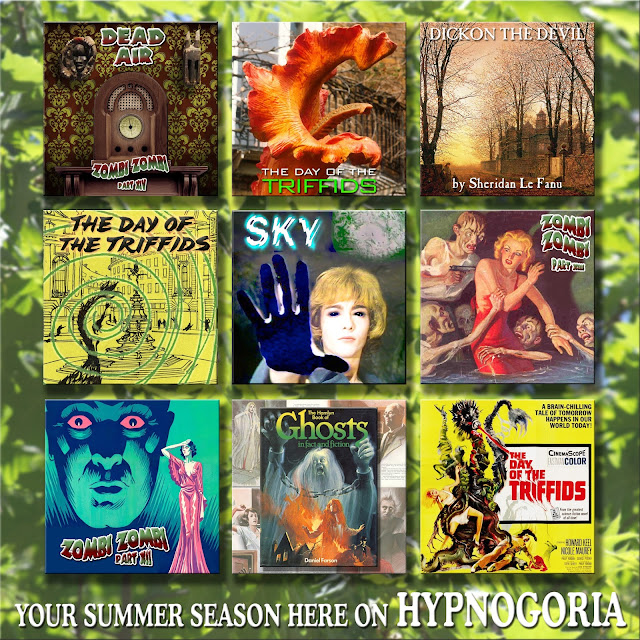 A taster for the shows lined up for the next few months!* 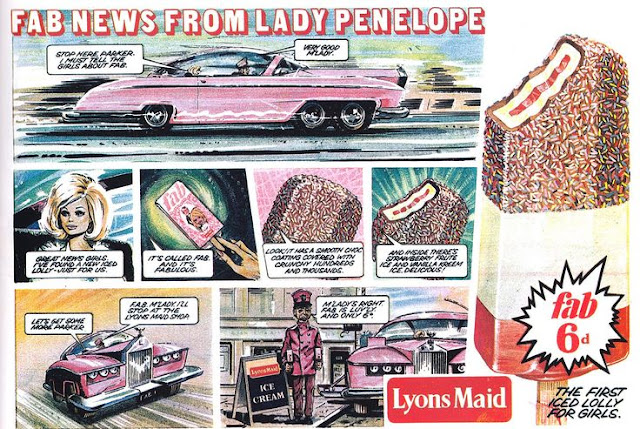 Welcome once again dear fiends to the 'Orrible 'Ouse of Terrible Old Tat! And while summer is still here (well, as much as it ever is in Britain), we are continuing our explorations of the contents of chiller cabinets from years gone by! Now then, in recent raids to the cryogenic vaults of the 'Orrible Old 'Ouse... well, some old cardboard boxes at any rate... we've previously uncovered some SF tie-in lollies of yesteryear. However allying your lollies with a popular brand is nothing new...

Now the British frozen snack market was dominated by two titans, twin colossi of the chiller cabinets. One was Walls, whose Sky Rays and Dalek's Death Ray lollies we have already encountered. The other however was Lyons Maid, whose long-serving logo of three children performing some strange ritual dance, presumably to summon up an ice cream van, still lingers in the minds of men as a potent occult symbol meaning "ice lollies sold here". 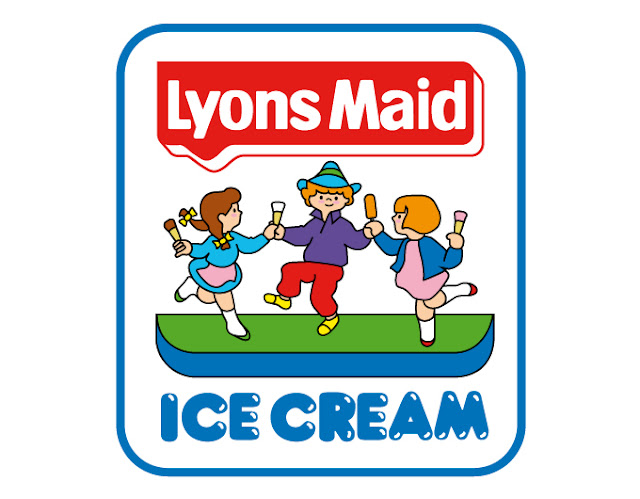 "And oh how they danced... the little children of the ice cream van..."

And way back at the dawn of the Ice Lolly Wars,  Lyons Maid very quickly got in on the tie-in gimmick. However they had their own spin on it, for rather than doing a promotion that tie-in an existing lolly to something popular (as Walls' Sky Ray had done with it's Doctor Who campaigns) instead they launched a pair of lollies directly tied to popular properties. These were the Zoom and the Seajet, the official icy snacks for Fireball XL5 and Stingray respectively. A few years later they would repeat the same trick again with more lollies twinned with various Gerry Anderson puppet series. Hence in 1967, came a Thunderbirds lolly, the Fab, which was priced at 6d, and consisted of strawberry fruit ice and vanilla ice cream, with a top dipped in chocolate and sprinkled with hundreds and thousands. 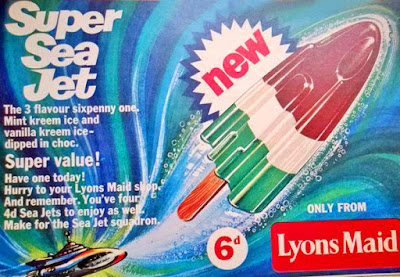 Of course, there were the usual promotional campaigns to accompany these ice-cold treats too. You could collect wrappers and get models of the famous vehicles from the show - collecting Zooms got you a miniature Fireball XL5, while Seajet wrappers could net you your very own Airfix model of Stingray. Additionally often the lollies came with colourful cars to collect, with Zoom first offering cards featuring Steve Zodiac and co., but offering Thunderbirds cards in the later '60s. 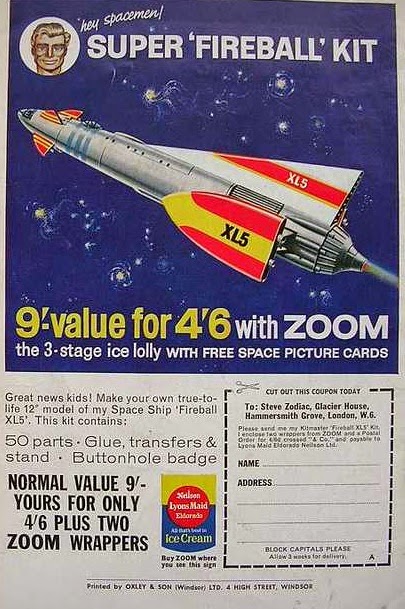 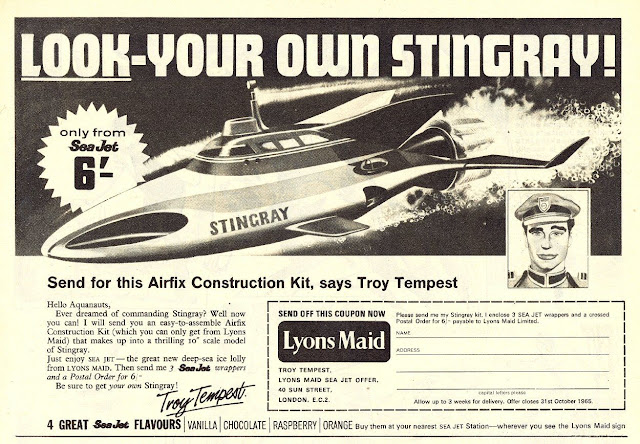 Then in 1968, they launched a Captain Scarlet lolly called Orbit - this one was a tad more expensive at 9d, and was pretty much a re-tooled Zoom, but flavoured chocolate and orange. Meanwhile the Zoom lolly itself got yet another puppet partner, and was tied into Joe 90!

However it is interesting to note that several of these breeds of lolly outlived the properties they were launched to cash in on, with the likes of Zooms, Orbits and Fabs eventually dropping their puppet pal brandings, and would populate the chiller cabinets as brands in their own right for several years to come.

Possibly this might explain why the bosses at Lyons Maids - who I still suspect were actually the slightly sinister trio of dancing children on the logo - decided to not create anymore closely branded lollies for quite some time. Instead they concentrated on making lollies in ever more inventive flavours with names like Cornish Treasure, Red Devil and Apple Jack.  However in the late '70s, this trend for branded lollies would return bigger and better... But that's a tale for another day... 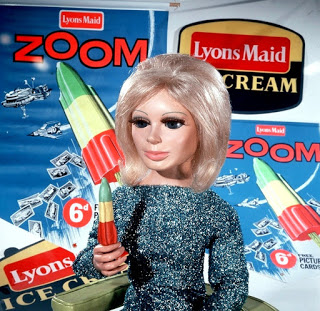 GREAT LIBRARY OF DREAMS #35 - The Richpins 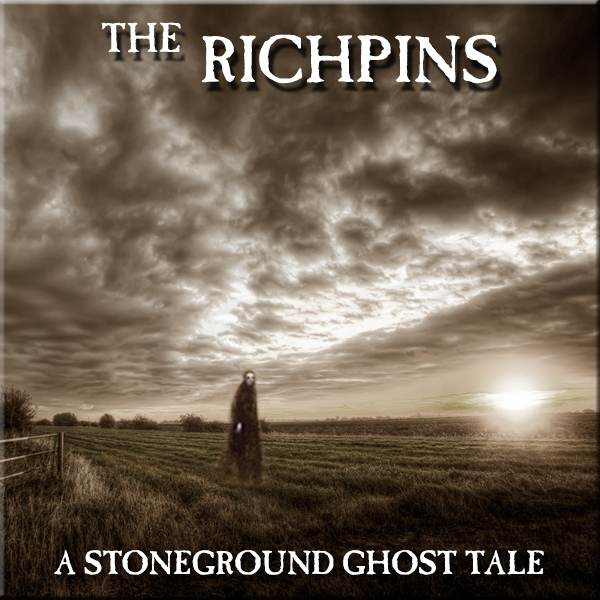 In this episode, we turn once again to the Stoneground Ghost Tales by EG  Swain. In this little story, we learn of how Mr Batchell's rural parish is being haunted by a strange figure...

A few weeks ago Mr Chris Lambert, the creator of Tales from the Black Meadow (which I reviewed back here) got in touch and asked me if I'd like to part of the Wyrd Kalendar's July festivities. Of course I naturally jumped at the chance to part of such a fine project.

Now for those of you who don't know, the Wyrd Kalendar is a series of monthly musical mixes, preparing the way for the forthcoming book Wyrd Kalendar (written by Chris Lambert and illustrated by Andy Paciorek for Wyrd Harvest Press). And very wonderful they have been too, atmospheric and eclectic mixes of music and narration with a strong folk horror theme. So then I was most honoured to provide some narrations for this month's explorations...

It is time to run through the fields, your hand trailing against the light brown grass so close to harvest, ignoring the angry cries of the farmer as you exploit your imagined bucolic past.

It is time to build a grotto to celebrate Saint James. It is time to venture onto the Kalendar Heath again. Let the heat of these songs enfold you as Jim Moon reads extracts from this month’s story “Grotto Day” (written by Chris Lambert as part of Wyrd Kalendar due out in October).

While here is  the Weird Kalendar Blog

Also don't forget to make a trip to The Black Meadow

And more information on what the Folk Horror Revival is all about do visit here -https://folkhorrorrevival.com/

GREAT GHOSTS OF THE SHELVES #26 - The Clifton House Mystery 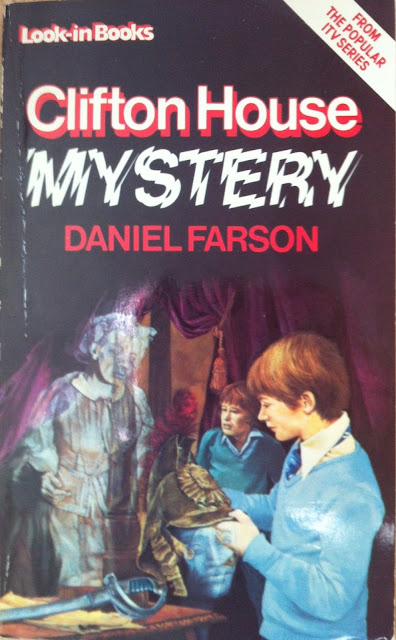 This week on my podcast, we were talking about The Clifton House Mystery. Shown on Sunday tea-times in 1978, this drama serial aimed at children told the tale of an ordinary family who moved into a most extraordinary house, one with a troubled history and ghostly goings-on galore!

The series was co-written by Daniel Farson, who around this time was penning a series of volumes for younger readers on all things weird and wonderful - such as The Beaver Book of Horror, and lavish volume on ghosts, horror and monsters for Hamlyn. So perhaps it is no surprise that he also would get the gig writing the novelisation for the TV series. As was often the case with tie-in novels for films and TV shows, the book was released just as the series was airing which meant that if you had the pocket money available, you could read the book and find out how the show ended before the last episodes aired! However the real value of such tie-in tomes back in the day, was that these novelisations were the only way of reliving a TV show or movie you'd seen in the days before video recorders or on-demand services.  Of course now, you can buy the series lovingly remastered courtesy of Network DVD, but for many decades the only was to go back to this haunting series was by getting hold of a copy of this paperback... 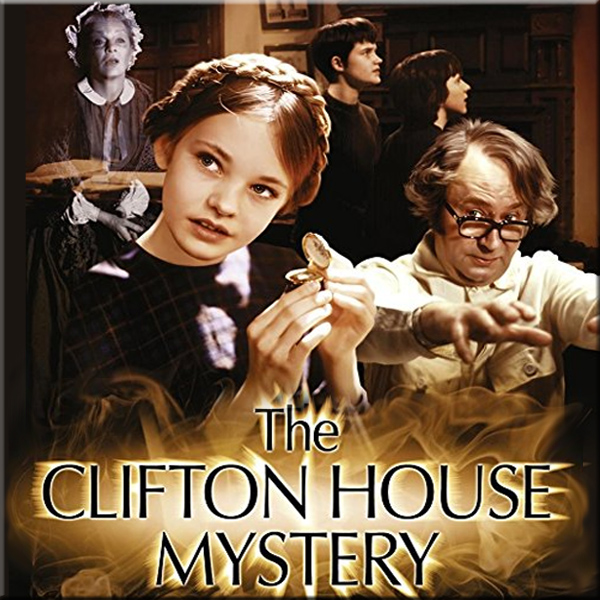 In this episode Mr Jim Moon continues to explore the eerie and macabre works for younger folks produced by Daniel Farson with a look at a ghostly television serial he co-wrote. Created for ITV, The Clifton House Mystery was one of several children's drama serials produced by Bristol's HTV in the '70s and '80s, many of which were on SF, fantasy or horror themes. In this serial, an ordinary family move into an old house that proves to have a somewhat troubled history...