THE FIRST PHANTOM - MR James, Ghosts and Punch and Judy 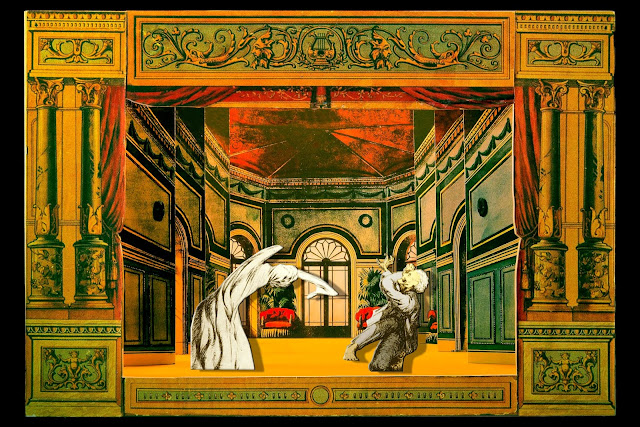 It is almost Christmas once again, and for some of us one of the delights of the festive season is indulging in the old tradition of telling ghost stories. Now the practise of spinning chilling tales of spectres and apparitions round the fire at Yuletide is indeed a very old one (and for an in-depth history of the ghost story at Christmas, do have a listen to my Christmas show from last year), and of course, one of the great stories of the season is A Christmas Carol. However aside from Marley's shade and all the other festive spirits conjured up by Dickens, when we think of ghost stories and Christmas, there is another name to springs to mind - MR James.

James was a brilliant scholar and writer, who lectured at Kings College Cambridge and was Provost of Eton. However while his academic work on old texts alone may have earned him a place in the history books, he is better known for the ghost stories he penned in his spare time, which were collected into several volumes throughout his life. And while his chilling tales were written merely for the amusement of his friends, and indeed often as a little entertainment for a Christmas night, since their publication, they have had a huge influence upon the weird tale in literature, inspiring a host of other masters of the macabre such as HP Lovecraft, Ramsey Campbell, Thomas Ligotti and Adam Nevill. 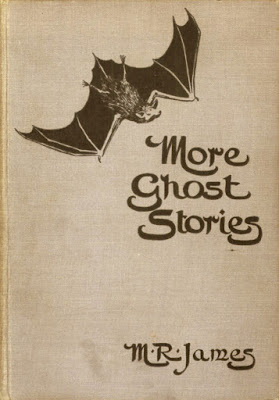 However what influenced James himself? Well, if we are looking for a literary model, the tales of Sheridan le Fanu are an obvious reference point - for James considered the ghost stories of this Irish Gothic writer to be the finest ever written. However many inspirations for James' own tales are found in his personal history and interests. Many stories were suggested by places he visited or situations in his own life - indeed one of the oft-leveled criticisms of James' works is that they too often feature scholars or antiquarians. However while this has been a recurring motif with his critics, it is also one of the laziest criticisms possible, for is not one of the golden rules for any author to "write what you know".

However as regarding the horrors that haunt his stories, James himself has supplied an ancestor for them all. In the spring of 1931, on the 17th of April, he published a short article entitled “Ghosts Treat Them Gently” in the pages of the Evening News. This short essay detailed his own thoughts on the writing of eerie tales, and begins with detailing what first drew him to them -

What first interested me in ghosts? This I can tell you quite definitely. In my childhood I chanced to see a toy Punch and Judy set, with figures cut out in cardboard. One of these was The Ghost. I was a tall figure habited in white with an unnaturally long and narrow head, also surrounded with white, and a dismal visage. Upon this my conceptions of a ghost were based, and for years it permeated my dreams.

And indeed one can find many traces of this first phantom in his stories - for there are disconcerting whites shapes several of this stories - for example, in Casting the Runes, An Evening's Entertainment and Oh Whistle and I'll Come To You My Lad.  And then, of course, there is the only tale he wrote that was set over Christmas time - The Story of a Disappearance and An Appearance, which features a sinister spectral Punch and Judy show as its centre piece.


Now it recently occurred to me that it would be most interesting to discover if the toy theatre whose Ghost so impressed itself upon the imagination of the young Monty James was still in existence. MR James was born in Goodnestone, Dover, on 1st August 1862, and hence I reasoned that we were looking for a Punch and Judy set dating from around 1860 to 1880. Now given that we have no name or maker's details given, and in addition to the ephemeral nature of toys in particular those constructed of cardboard, it seemed like this may well be an impossible task. However on the positive side of things, toys, puppets and Punch and Judy sets have long been very collectible items, so there was a chance we could locate a possible candidate or two. 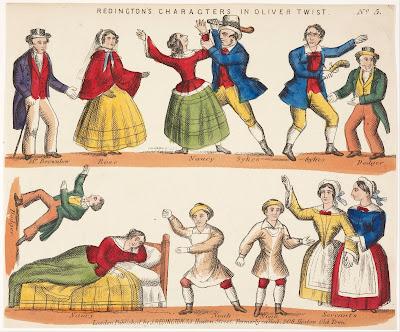 Now the toy theatres, with puppets constructed of paper or card, have been a popular item for many, many years. And it was not too much trouble to discover that histories of this particular toy have been written (and for further detail see this site). Hence it was quickly discovered that the toy theatre began in the early 1800s. Now prior to the 19th century, prints of characters from plays and dramas had been very popular, and in 1808 a printer's apprentice named John Kilby Green had the idea of taking such prints featuring a cast of characters and making them smaller so they could be cut out and made into figures. A penny got you a sheet in black and white which you had to colour in yourself, or tuppence a printed colour one.

These "Juvenile Drama" sheets were very popular, and other printers soon got in on the act. Furthermore the production of these sheets of characters were soon accompanied by cut-outs that could be assembled into a miniature theatre for the figures to perform in. And by 1812 toy theatres were all the rage, and indeed have remained popular ever since. In the early days, a child had to glue the carefully trimmed out pieces onto card themselves, but later toy theatres came already created in cardboard with only some minor assembly to be done before a first performance was possible. 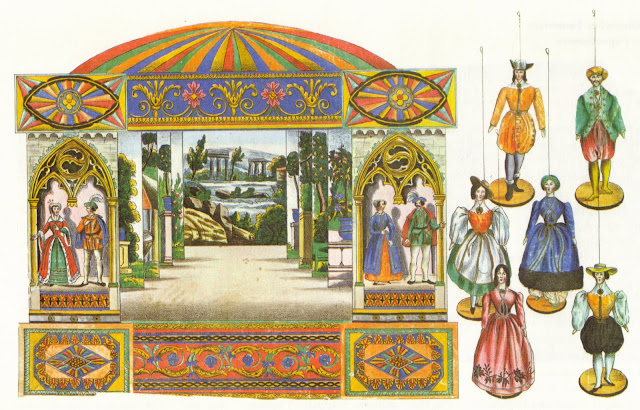 So then, by the time MR James was a boy, these paper and card theatres were a long established staple of the toybox. And much like today, they came in a variety of forms, from expensive ones with wooden theatres and real curtains, to cheap kits of just printed paper or card. Now I soon discovered that the traditional Punch and Judy show had been a popular subject for Victorian and Edwardian toy theatres, partly down to this particular species of puppet drama enjoying its heyday then, but also because a paper Punch and Judy show required only a small tent rather than a complicated theatre and featured a small cast of characters. And hence a whole show could be cheaply produced on one sheet of paper or cardboard. The downside of this for our investigation was that as Punch and Judy toy theatres were usually of the cheaper variety, and so there are fewer of them surviving from the late 1800s to hunt through for James' Ghost. 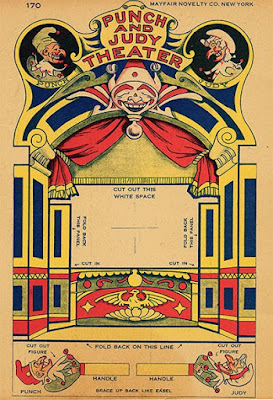 Now while James does not supply us with many details of his cardboard theatre, his description of the Ghost itself certainly helped to narrow the field. And indeed many surviving examples of card Punch and Judy shows were eliminated straight away as they didn't contain the Ghost character at all. And the remaining examples did not feature a phantom with an unusually thin head. Even allowing for later sets, on the grounds that prints were often reused many times down the years and even pirated by rival printers, finding a thin headed ghost proved difficult. Indeed I feared that the set that had made such an impression upon James was now lost to us. 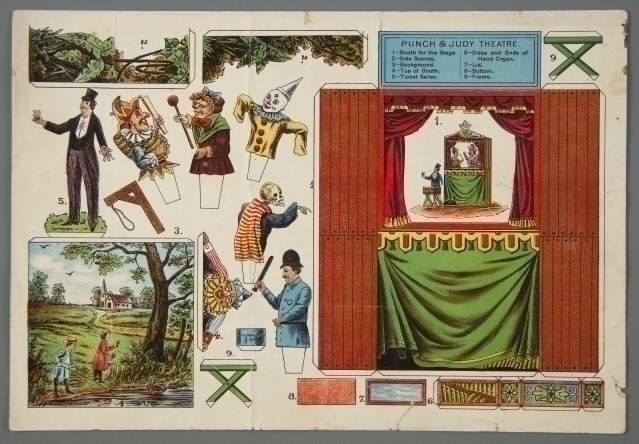 But then I chanced upon an item in the Victorian and Albert Museum. It was a relatively new piece, but it was a reproduction of an earlier toy theatre. Published in 1977 by Mike Bartley and now part of the George Speaight Punch & Judy collection at the V&A, this was a reprint of one-sheet theatre set entitled PUNCH'S SHOW, which was published by originally by J. Murray and is believed to date from circa 1875. And as you can see below, the Ghost does indeed sport "an unnaturally long and narrow head, also surrounded with white, and a dismal visage" 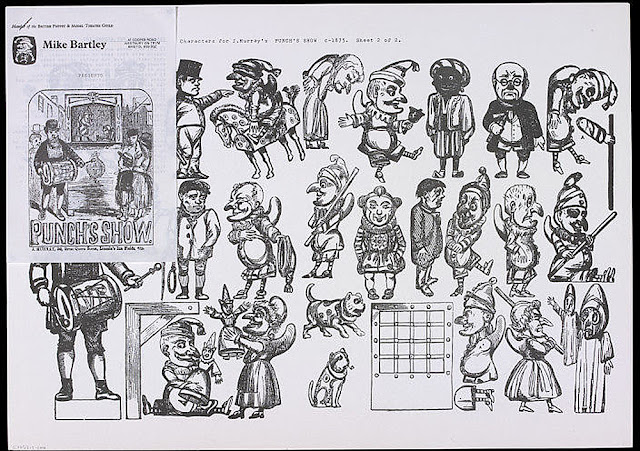 Of course in 1875, MR James would have been 13 years old, and perhaps therefore a little too old for this paper ghoul to have made a huge impression on his imagination. However given that toy theatres had been popular since 1812, it is not unreasonable to theorise that this design by John Murray had been printed before at an earlier date. Plus considering that in the world of Victorian printing, piracy was rife - for example, Dickens was famously a frequent victim of such copyright breaking - it is very possible too that Murray's Punch's Show is a knock-off of an earlier work.

Given that according to the historians of such miniature theatres, by 1870 the popularity of the toy was waning it seems likely that this obviously inexpensive one-sheet set could indeed date from an earlier time. And so, as I have so far found no other possible candidates to fit the description given by James, we could well have here that seminal first phantom that sparked the great writer's imagination, and from whom a celebrated line of formidable visitants descended! 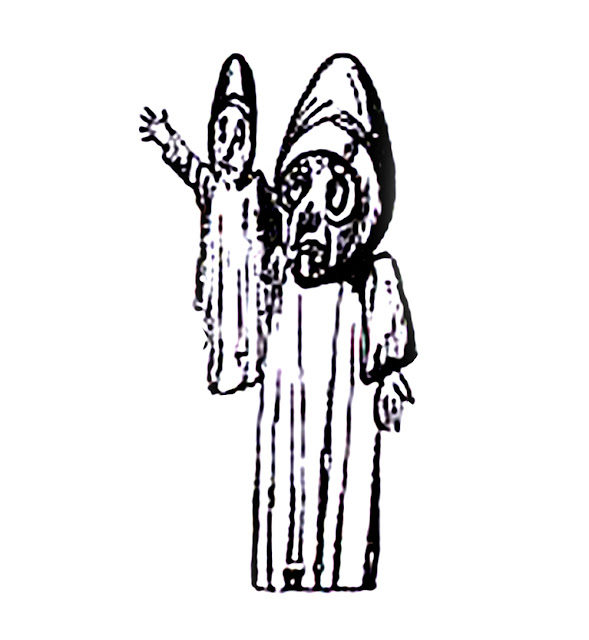 Incidentally, Dickens was a huge fan of P&J. He wrote an article about it and included two Punchmen in "The Old Curiosity Shop".

Great article! I've always wanted to know what the ghost looked like from James's description. And thank you for doing the research. I've looked before on the net and it's a challenge.