THE 'ORRIBLE 'OUSE OF TERRIBLE OLD TAT #26 - This is Mutie Country! 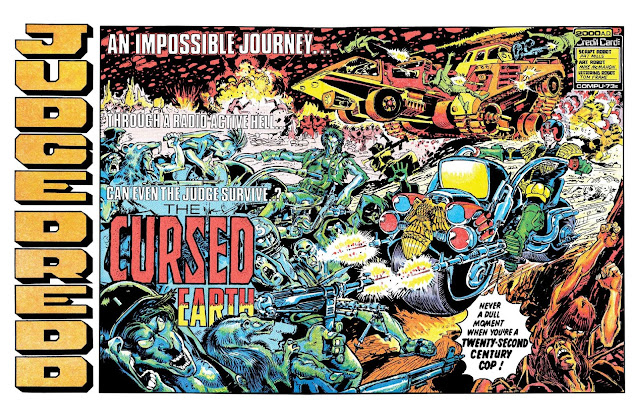 Welcome once again dear fiends to the 'Orribe 'Ouse of Terrible Old Tat! That's it, step inside! The Geiger counter by the door is purely a precautionary measure I assure you! We don't want any of the Brotherhood or Slay Riders sneaking in do we now? Anyhow, today we are heading out once again into the irritated badlands of late 20th century tat, to continue the strange saga that is the history of the Landmaster.

So then, to briefly recap, in the late '60s SF scribe Roger Zelazny wrote a tale of a violent anti-hero, Hell Tanner, who must pilot an armoured vehicle on a desperate mission to ferry a plague vaccine from California to Boston through a now familiar radioactive wasteland. That story was Damnation Alley, and around a decade later in 1977, it was turned into a rather cheesy SF movie of the same name. But while the film ended up being something of a mess, one positive to emerge from its own creative irradiated wasteland was that they did design a very cool screen version of Hell Tanner's "car", and this iconic vehicle was dubbed the Landmaster.

Now Damnation Alley, if you'll pardon the pun, tanked at the box office, so back in the day there was never any official toy version of the Landmaster. However as we saw last week, in the same year Matchbox released a range of three futuristic vehicles called Adventure 2000, and two of them, the Crusader and the Raider Command, seemed to owe for than a little to the Landmaster. Spooky eh? But the following year, 1978, something even stranger happened. 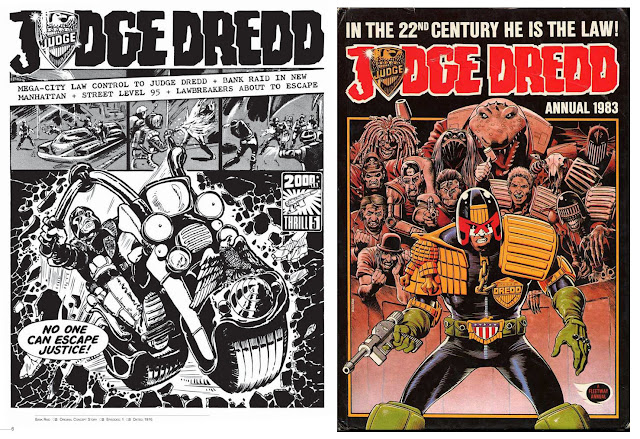 In the spring of 1977, IPC magazines launched a new weekly SF comic called 2000 AD. While initially the lead strip was a revamped version of legendary British comics hero Dan Dare, the veteran spacer was soon usurped by a new breakaway star who appeared in Prog #002 - Judge Dredd. Now as a future cop in a post nuclear war world, policing the mean streets of Mega City 1, Dredd quickly became the new comic's most popular strip, and would heavily influence both Mad Max and Robocop. At first, each week saw Dredd tackling some different bizarre future crime, but as the strip's popularity rose, longer stories started to appear, with the first major Dredd serial being a seven episode tale detailing a rebellion by the cities' droids, an event in Mega City history now known as the Robot Wars.

However roughly a year and a half into the 2000 AD's life, the comic's alien editor, known to us Earthlets as the Mighty Tharg, decided on an even bolder step - a Dredd mega-epic, a serial tale that would run for a whopping 24 weeks! Of course such a big story needed an equally big plot, and hence legendary writer Pat Mills devised a tale that would take us beyond Mega City 1; a story that would not only explore the wider world of Dredd's universe, but also detail some of its previously unrevealed history. And what was the epic plot line to accomplish these lofty aims? Well, stop me if you've heard this one before...

A lethal plague has broken out in Mega City 2, the giant metropolis on the West Coast of America. Mega City 1, which is occupies the Eastern seaboard of the former USA, has come up with a vaccine to send over to its beleaguered sister city. However between the two cities is the Cursed Earth, a huge irradiated wasteland full of monsters and mutants. Thanks to extreme weather flying over the Cursed Earth is impossible, and hence a land mission is set up. Naturally the man to undertake this dangerous mercy mission is Judge Dredd. However to accompany him, Dredd enlists a criminal biker called Spikes Harvey Rotten, with the offer of a free pardon. And so they set off to deliver the vaccine in a specially armoured vehicle, the Land  Raider... 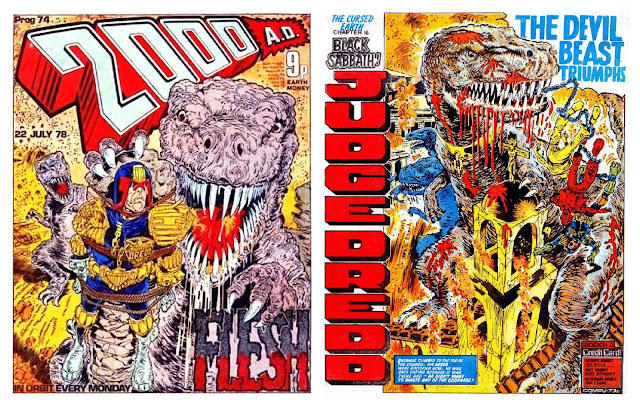 Quite why Zelazny never sued them, I really don't know. However in fairness, although the central concepts are very similar, the actual events of in the stories are far different. Dredd's epic, known as The Cursed Earth, sees the judge encountering psychics, mutants, robot vampires, aliens, and war droids. As an aside, there's even a sequence where Dredd tangles with some dinosaurs that were scientifically resurrected by a process similar to cloning for a future theme park! Yes, Pat Mills also ripped of Jurassic Park, but very cleverly avoided being sued by doing it a whole 12 years before Michael Crichton wrote the original novel. Anyhow...

The Cursed Earth ran from May to October in 1978 (2000 AD progs #61 to #85 fact fans) and quickly became a classic of British comics. And if you want to hear more about it, I guested on this episode of the Mega City Book Club Podcast to discuss it.

However, if there weren't already enough weird links clustering around this mega epic, there was another exciting twist to this saga. For excited readers soon spotted instantly that the Land Raider, seen below being put through its paces, was in fact identical to Matchbox's Raider Command. And if you look at the dialogue in the pages reproduced below, you'll notice that they even have the same serial number - K-2001. 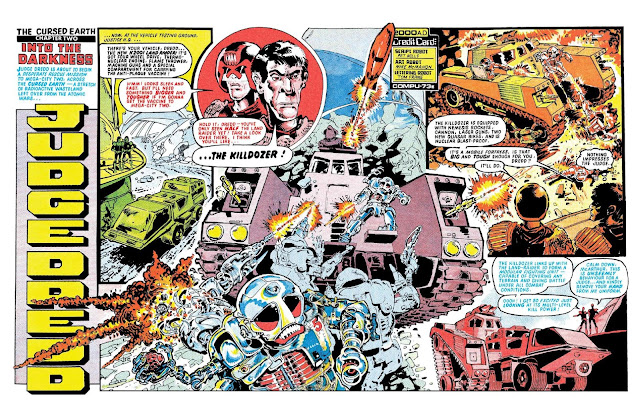 Now here is where it gets interesting, for as yet no one is quite knows exactly how this particular toy ended up in the pages of 2000 AD. Matchbox itself made no particular fuss about it, and there was no official announcement in the comic at the time either, which could suggest the Raider Command was unofficially borrowed at first. Not that us kids cared of course - we were just too excited about either a) being able to own a Judge Dredd related vehicle, or b) suddenly seeing a favourite toy appearing in 2000 AD. Plus we learned that the armoured rear module was called the Killdozer!

But however the deal came about - for surely there must have been a deal - a few weeks into The Cursed Earth running in 2000 AD, in Progs #80 and #81 to be exact, our beloved alien editor, Tharg the Mighty acknowledged that a very cool Matchbox toy was appearing in the strip. And what was more, the Mighty One was launching a competition that could win you the entire Adventure 2000 range! Running over two weeks, and involving a bit of code breaking, this competition saw 60, yes 60 complete sets of the Adventure 2000 range up for grabs! 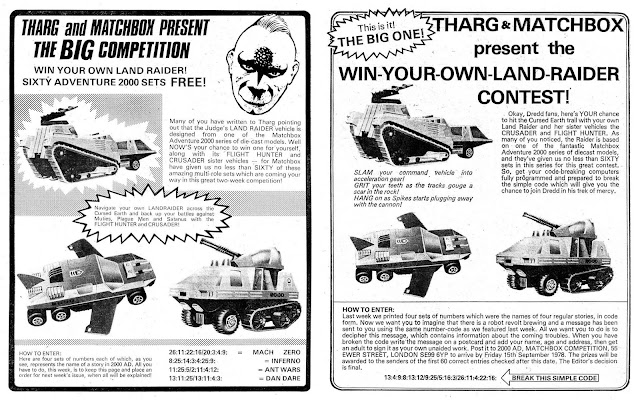 So then, given that most kids were likely to be either too lazy to enter, or too dense to crack the code (and the answer was... work it out for yourself grennix!), a huge 60 sets meant you had better odds than usual at winning something! As it was, I didn't enter this competition myself as I already had the Raider Command and the Flight Hunter. Ironically though, in the end I never did manage to get the Crusader and complete the set. But still, I had many happy hours recreating scenes from The Cursed Earth with the two I did have.

However even if you had snagged one of the 60 sets offered by Tharg, the fact was your new collection of die-cast future vehicles wasn't going to stay compete for long. For as you can imagine Adventure 2000 was a highly popular range, and therefore it wasn't long before Matchbox brought out some new additions to it. But that dear friends is a tale for next time... 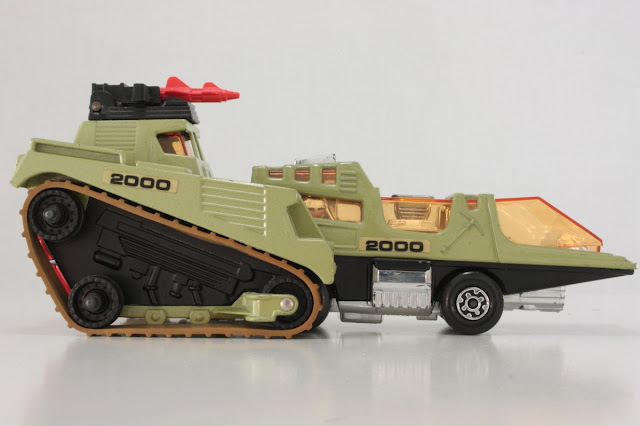