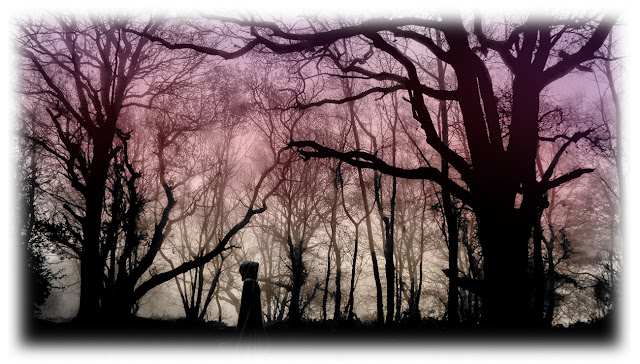 Last week we told the eerie and tragic tale of the Black Lady of Bradley Woods. However there is another story attached to this particular ghost which also delves into her origins to a lesser degree. And while the legend we recounted last week bears all the hallmarks of a traditional ghost story from local folklore, this supplement to the main legend,  I suspect, is of far more modern vintage.

If you look up the legend of the Black Lady, you will soon find an oft-repeated assertion that the Black Lady was a nun. Now at first glance this appears to make a lot of sense, for British folklore is chock full of phantom nuns and spectral monks. However, quite clearly her origin tale make no mention of her being a nun at all. Now in the realm of folklore, it is not uncommon to find a ghost or spirit to have several different origin stories, and this is very true in cases such as this one where the entity has no definite name.

However there are some factors here that raise some suspicions. Firstly, so far as I can tell, no one has ever described her as sporting the usual nun's wimple and habit. And secondly, the nearest convent, and indeed the nearest sites of former convents even, are actually several miles away. Now having done a fair bit of digging into the assorted accounts of the legend,  I am beginning to suspect that what we will call "the nun theory" isn't so much folklore but something I have started to think of as weblore. And what is weblore? Well, as any reader in any field will tell you, the major problem with researching virtually anything online is discovering endless pages featuring the same information copied either in whole or in part from one single source. The most common example of this are the hundreds of pages that simply copy and paste entries from somewhere like Wikipedia. Additionally there are an equal number of sites that don't copy and paste wholesale, but simply paraphrase the text, allowing further inaccuracies and distortions to creep in. Hence any errors from an original source are very quickly reproduced, and the rogue factoid becomes part of the popular wisdom on the subject.

Of course there is a similarity here with the traditional way folklore is transmitted, with folks repeating the same stories time and time and again, and sometimes adding or omitting various details, either deliberately embellishing the tale or just by making mistakes. However the line I would draw between actual folklore and it's modern relation weblore, is that the former is done through an oral tradition or by literature, and the process is slow and gradual. Whereas weblore evolves rapidly from the mechanical means of copying and pasting, with variations creeping in from repeated mistakes or poor copy editing, rather than the tale organically changing through being retold through different tellers.

Now then, if you look up the legend of the Black Lady, you can find many sites that simply repeat or rephrase the Wikipedia entry on this ghost. And the text on the original page states that "One theory that has been put forward is that the Black Lady is the ghost of a nun", and unsurprisingly this factoid has become part of the weblore of the Black Lady. However if you look up the reference Wikipedia gives for the nun theory in the page's footnotes, it points to a report in the Grimsby Telegraph, and this newspaper article actually says something a little bit different.

To begin with, the newspaper report is detailing an eerie photograph that allegedly may show the famous local phantom. Apparently while taking pictures of her cousin at night in Bradley Woods, photographer Kirsty Richie discovered strange shapes appearing in the shots. Naturally this was enough for the local paper to happily recounts the legend, and the piece remarks -


One theory is that she is the ghost of a nun, and was also said to appear in Nunsthorpe before moving to Bradley.

So then, I decided to dig a little deeper, and began looking for tales of ghostly nuns in the nearby Nunsthorpe. Now this western area of Grimsby is only a few miles away from Bradley Woods, and was once the site of the Priory of St Leonard. And yes, this religious institution was once home to nuns - and for more information on it I would direct the interested reader to local historian Rod Collins's page on it.

However the priory was closed down by Henry VIII in 1539, and it then became Nuns Farm. In 1935, this was demolished and eventually in the 1920s, the land was acquired by the local council and new houses were built on the site. Unsurprisingly given the area's long and rich history, I did find some reports of ghosts roaming this new housing estate, but I couldn't find any tales of a spectral nun being spotted. However I did find several mentions of a hooded man being seen, and in fact the case was featured in the popular TV series Arthur C Clarke's World of Strange Powers. In episode 5, entitled  "Ghosts, Apparitions and Haunted Houses", which first aired on 1st May 1985, we got the following report of the hooded man -


Now I rather suspect that these eerie tales of a hooded figure are the real origin of the alleged nun ghost. I would guess that these reports of a hooded ghost, and in fact most likely this 1980s TV report on the sightings, were misremembered, and hence the hooded spectre ended up changing sex and becoming a nun. With that muddle in place, it is a short step for someone to theorise that these two ghosts dressed in black and appearing relatively close together were one and the same. And so a hooded figure becoming conflated with the Black Lady.

Furthermore from my research it is quite clear that the stories of the Black Lady haunting Bradley Woods date back well before the reports of a hooded figure in Nunsthorpe. To turn once more to local historian Rod Collins, in the lively comment section on his article on the Black Lady there is no shortage of folks recounting their own tales of the Black Lady, with several locals recalling hearing the stories as children in decades before the era of ZX Spectrums and Rubik's Cubes. Quite clearly Bradley Woods has had a spooky reputation for a considerable amount of time... 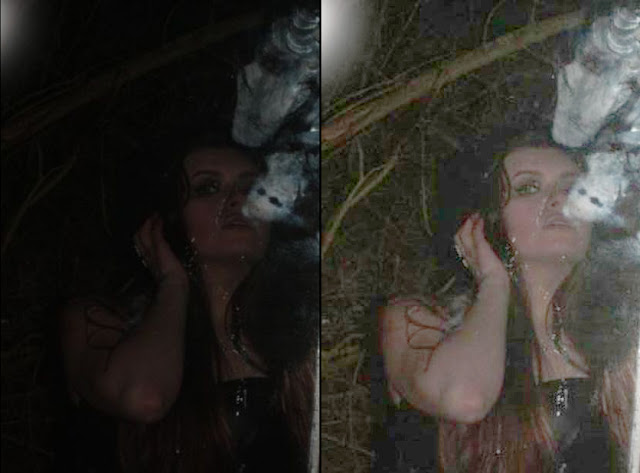 As for the photograph in the report (which is archived here), I have reproduced it above alongside a version where I adjusted the brightness levels to better see what is going on. To my eyes, I would guess the strange shapes are possibly the result of some kind of reflection, but given the low quality of the picture I was working with it is hard to be certain what is causing the spooky looking shapes. However, given the nebulous nature of the shapes, I am strongly inclined to rule out a deliberate fraud, as I suspect that a deliberate hoax would produce something resembling a typical pop culture ghost rather than some mysterious patterns.

But the photograph does actually prove something about the Black Lady of Bradley Woods. For while the above snap may well fall short of providing concrete evidence for the existence of ghosts, it is absolutely rock solid proof that the story of the Black Lady is alive and well in the 20th century. And next week we will look at how the tale of this spectre is very much still a living legend. 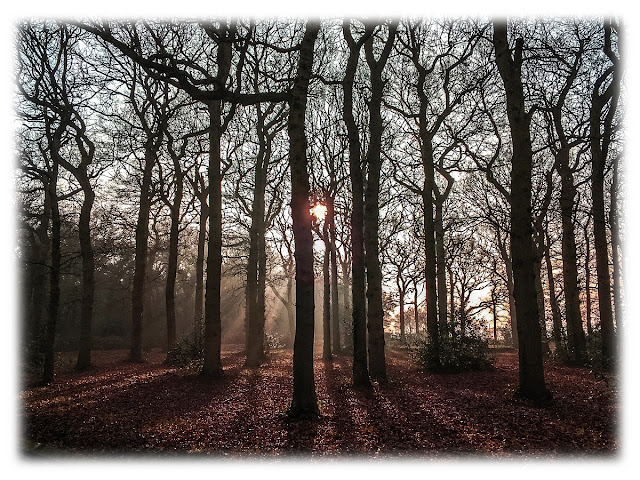