FOLKLORE ON FRIDAY - The Tale of the Holbeach Gamesters Part II 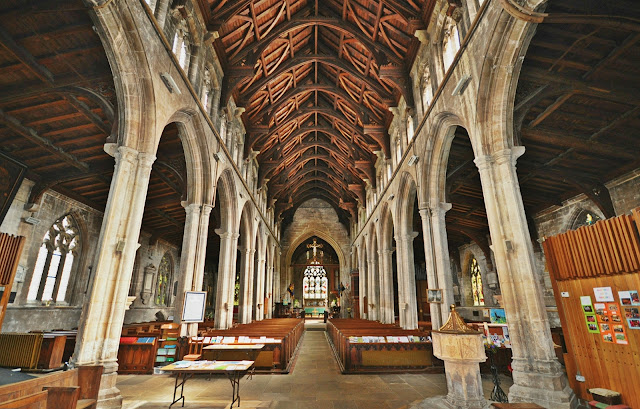 Inside All Saints, Holbeach by Gazmando

Last time on Folklore on Friday, we enjoyed the tale of the Holbeach Gamesters (find it here), a story of gambling and grave-robbing going badly awry. Now like many a folk-tale, this legend from Lincolnshire operates on a variety of levels. To begin with, it  is simply an entertaining yarn, one that may raise a shudder or two, or depending on the teller, possibly some ghoulish laughter. And certainly it appears to have been a popular tale, given that it exists in several variations, for as a rule of thumb, the more enduring an old tale is, the more variants of it you can find.

Initially it would appear to be a fairly standard European folk-tale, and given that it features ghosts, goblins and the Devil himself  dealing out supernatural vengeance or justice, you could be forgiven for thinking its origin was as a cautionary tale. Certainly its narrative seems tailor-made to illustrate the moral message that cards, ale, and a disrespect of the dead and the church will drag you down to Hell. However there is more to the story of  the Holbeach Gamesters than first meets the eye, for while it definitely fits the traditional pattern of the cautionary tale, a little research uncovers a rather different origin.

Now I first encountered a stripped down version of the tale in a most unusual place. British confectionery giant Trebor launched a new range of sweets at the end of the 1970s called Mummies. These rolls of black hard sweets promised a "taste of the tomb" in the form of  "hidden fruit flavours". They came two varieties with different fillings - soft centres in red packets, and sherbert in green ones. However both varieties featured one of Trebor's marketing gimmicks - printed on the inside of the roll's paper sleeve was a "Tale from the Tomb". There were twelve to collect and featured some well-known spooky legends such as the curse of King Tut's tomb, but many featured more obscure tales drawn from folklore. And #2 in the series was entitled "The Gambling Corpse" -  a pocket-sized version of the legend of the Holbeach Gamesters! 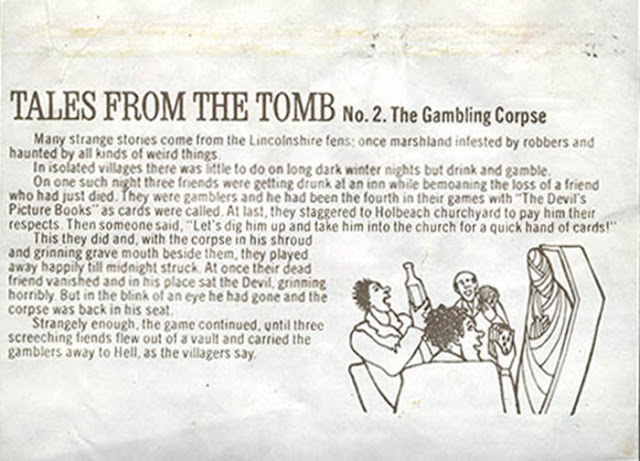 Now as we have noted there are several variations of the story, ranging from the simplest where the three friends break just into the church to play cards and disturb the body of woman laid for a funeral, to a more elaborate version recounted by a former vicar of All Saints that folklorist Ethel Rudkin recorded in 1931. Delving further back in time, we find the story being recounted in verse, with the very popular Victorian poet Eliza Cooke retelling the tale in the poem The Sacrilegous Gamesters which appeared in her collection Melaia, and Other Poems in 1843.

However the earliest properly dated version was written in 1800 by Thomas Hardwicke Rawnsley, a rector in Bourne, Lincolnshire, who is now best remembered for his friendship with the poet Tennyson. However Rawnsley penned some verse too, in particular this ballad, which when it was first printed was billed as a true story...

The Three Revellers; or Impiety Punished
A Legend of Holbech

In the bleak noxious Fen that to Lincoln pertains
Where agues assert their fell sway,
There the Bittern hoarse moans and the seamew* complains
As she flits o'er the watery way.

While with strains thus discordant, the natives of air
With screams and with shrieks the ear strike,
The toad and the frog croaking notes of despair
Join the din, from the bog and the dyke.

Mid scenes that the senses annoy and appal
Sad and sullen old Holbech appears,
As if doomed to bewail her hard fate from the Fall,
Like a Niobe washed with her tears.

From fogs pestilential that hovered around,
To ward off despair and disease,
The juice of the grape was most generous found.
Source of comfort, of joy, and of ease.

At the "Chequers" long famed to quaff then did delight
The Burghers both ancient and young.
With smoking and cards, passed the dull winter night.
They joked and they laughed and they sung.

Three revellers left, when the midnight was come.
Unable their game to pursue.
Repaired, most unhallowed, to visit the tomb
Where enshrouded lay one of their crew.

For he, late-departed, renowned was at whist.
The marsh-men still tell of his fame,
Till Death with a spade struck the cards from his fist
And spoiled both his hand and his game.

Cold and damp was the night; thro' the churchyard they prowled,
As wolves by fierce hunger subdued,
'Gainst the doors they huge gravestones impetuous rolled
Which recoiled at such violence rude.

From the sepulchre's jaws their old comrade uncased,
(How chilling the tale to relate),
Upreared 'gainst the wall on the table was placed
A corpse, in funereal state.

By a taper's faint blaze and with Luna's faint light
That would sometimes emit them a ray,
The cards were produced, and they cut with delight
To know who with "Dumby" should play.

Exalted on basses the bravoes kneeled round
Exulting and proud of the deed,
To Dumby they bent with respect most profound
And said "Sir! it is your turn to lead."

The game then commenced, when one offered him aid,
And affected to guide his cold hand
"While another cried out, "Bravo! Dumby, well played,
I see you've the cards at command."

Thus impious, they jokèd devoid of all grace.
When dread sounds shook the walls of the church,
And lo! Dumby sank down, and a ghost in his place
Shrieked dismal "Haste! haste! save your lurch!"

Astounded they stared; but the fiend disappeared
And Dumby again took his seat,
So they deemed 'twas but fancy, nor longer they feared
But swore that "Old Dumb should be beat."

Eight to nine was the game, Dumby's partner called loud
"Speak once, my old friend, or we're done
Remember our stake 'tis my coat or your shroud
Now answer and win — can you one?"

"What silent, my Dumby, when most I you need
Dame Fortune our wishes has crossed,"
When a voice from beneath, howled, "your fate is decreed
The game and the gamesters are lost."

Then strange! most terrific and horrid to view!
Three Demons thro' earth burst their way:
Each one chose his partner, his arms round him threw
And vanished in smoke with his prey.

* a local term for seagull

Now it is interesting to note that while this version is highly detailed, other versions of the tale do actually name the men involved. As we saw last week, one claims the men were Slator, Watson, Barker and Codling, while another puts two other fellows in the frame - Abraham Tegerdine, Mr Slater, Dr Jonathan Watson and Farmer Guymer. It is also curious that some versions actually give us a date for these eerie events at Holbeach, with the Barker/Codling variant reporting it took place in 1793, while other versions placing them a decade earlier in 1783. Now usually folklore tends to be somewhat vague on details such as names and dates, so then could this tale be, as Rawnley claimed, a true tale?

In the 19th century the first proper scholarly studies of folklore began - indeed the term 'folklore' was originally coined by the antiquarian William Thoms in 1846. Fortunately for us, the legend of Holbeach was one that was investigated by the pioneers of this new field of study, and the surprising truth is that the story was inspired by actual events! What really happened was this - there were indeed four fellows who loved a game of Long Whist - apparently named Dr John Watson, John Key, William Slator and a chap called Whedale. And in 1783 three of these fellows were indeed drinking in the Chequers Hotel, and mourning the death of their friend. Just like the legend, a mixture of grief and alcohol led these fellows to think it would be a fine idea to dig up their recently buried pal for one last game. And again just like the old tale, they broke into the church and sat round the altar with the corpse of their late friend to play cards.

But rather than ghosts and goblins breaking up the macabre party, it was something far more mundane. A local man was passing by All Saints and saw lights flickering inside the darkened church. He peered through the window and was rightly horrified by the ghoulish game, and hence ran to the Chequers and raised a gang of stout fellows to apprehend the gamesters. As far as we know the men escaped any criminal charges, but records preserved in local history tomes by Grant W. Macdonald, the clergyman at another Holbeach Church St. Marks in the 1890s, show that the gamesters did make payments for the damages to the grave.

However while they escaped criminal charges and the affair was very much hushed up, there was a deep sense of scandal with Ethel Rudkin reporting that years later the villagers still did not like to speak of it. In her introduction to The Sacrilegious Gamesters, Eliza Cooke claims that the stories she heard said that "the affair created so much horror and disgust, that the wretched profligates who enacted it were eventually compelled to quit the town". And according Rudkin, it was said that locals became a little nervous of venturing round All Saints after dark, and thus tales of a haunting began.

However, as ever with folklore, some mysteries still remain. Some twenty years later in 1803, one of the gamesters, Dr John Watson, apparently took his own life, although whether this was anything to do with the infamous gaming night at All Saints we do not know. What we do know though, is that ironically the doctor was denied a burial in the churchyard of All Saints. But this was nothing to do with his previous ghoulish antics, but because he was supposed a suicide, and therefore not allowed to be buried in consecrated soil. However rather being interred just outside the churchyard,  Dr Watson was apparently buried in accordance with another piece of old folklore - out of town, on the Spalding Road, so that should he return as a ghost, his restless spirit would not be troubling the local people. 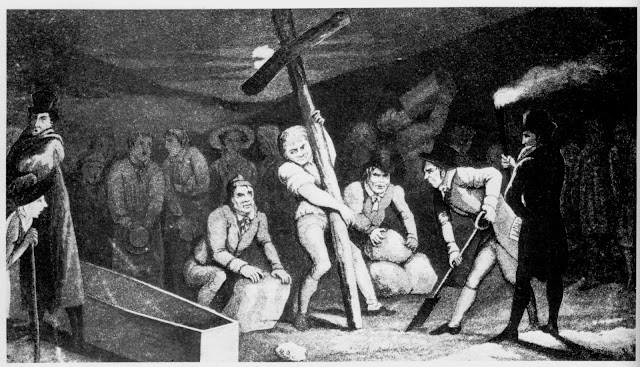 I have not heard that story since the seventies.Lovely find.