Welcome once again guys and ghouls to the tat-haunted Tomb of the Trumps! Once again we are delving in to the mysterious inspirations of the original Horror Top Trumps, and this week we open our investigations with this shrieking horror! 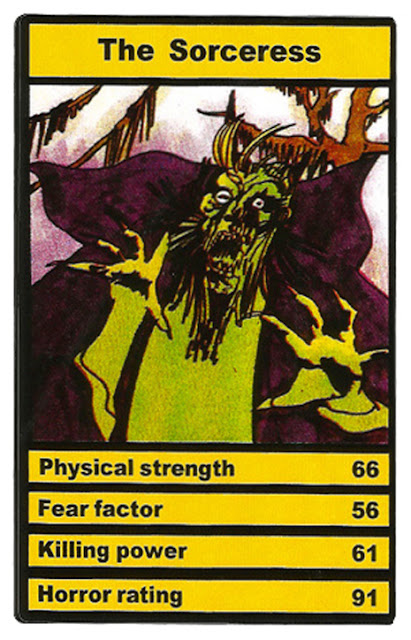 Now for years I had always suspected that the old Sorceress was inspired by something in an old horror comic, or possibly, given the sketchy style, that rarest of beasts in these decks: an original creation! However enlightenment came when I was enjoying a Bert I Gordon binge a couple of years ago. Now Gordon is most famous for his movies that featured things getting very large such The Amazing Colossal Man, Earth Vs the Spider and The Beginning of the End - living up to his initials of BIG! However he did produce other genre movies aside from his giant monster epics, and The Magic Sword from 1962 saw Gordon taking inspiration from the legend of St. George and the dragon to produce a fantasy flick for the children's market.

Now the movie tells of our hero George (Gary Lockwood) setting out with six knights to rescue a princess (Anne Helm) who is being held for ransom by the evil wizard Lodac, (the great Basil Rathbone). In classic folk tale fashion, the band of seven heroes face an assortment of different challenges, which will whittle down their numbers before reaching the final showdown with Lodac. And it is during  one of these challenges in their quest that we encounter the model for the Sorceress! 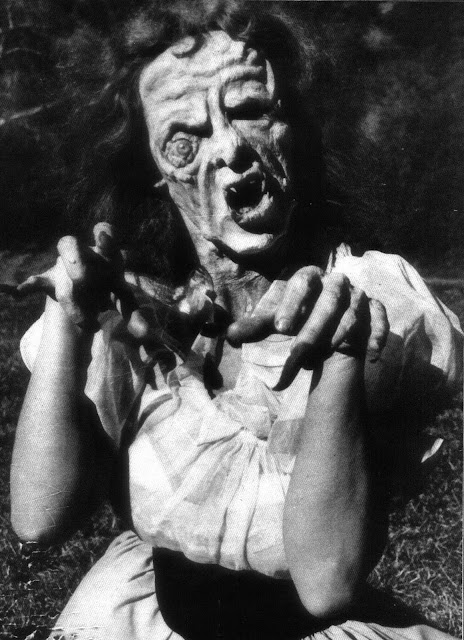 Sir Dennis of France is lured into a trap by the beautiful Mignonette, played by Danielle de Metz, However she is soon revealed to be a hideous hag bent on slaying him, played by Maila Nurmi, best known to fright fans as pioneering horror hostess Vampira. Actually Nurmi had appeared earlier in the movie as a sorceress, a confederate with Lodac in the kidnapping of the princess fair, and thanks to some green glowing eyes in both scene we know it is the sorceress who is behind this transformation of the beauty into a crone. So then, here we have a card with an accurate title for a change!

And we are still in not-quite-classic B movie land with our next card! But now we are into the realm of science fiction, and this many legged horror hails from outer space! 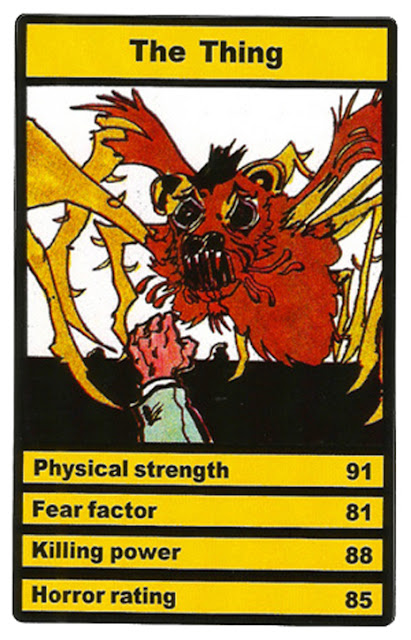 Now despite the card's title, this isn't a beastie to be found in Howard Hawks's classic SF movie The Thing From Another World (1951). But this space monster does come from the strange worlds of  '50s cinematic science fiction - a low budget flick called The Angry Red Planet (1959). 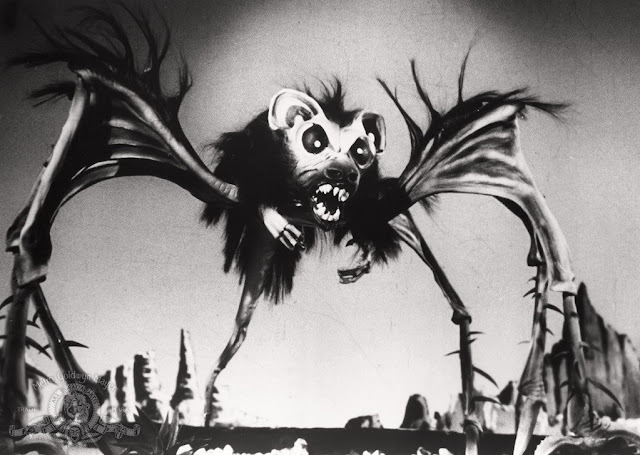 Made by another mover-and-shaker in the realm of low budget fantastic film, Ib Melchior, the man who brought us gems such as Reptilicius (1961) and Robinson Crusoe on Mars (1964), this movie tells of a mission to Mars by brave astronauts from Earth. In the wilds of the red planet, they encounter all manner of alien threats including carnivorous plants and giant amoebas. Now when our heroes first come across our creature, commonly called the bat-rat-spider, they mistake its legs for strange Martian trees! Yes, that's how big as this hybrid terror is! No wonder it got the prime spot on the movie's posters!

However I've never been entirely sure what that lone arm is doing in this picture... The flailing arm of a victim? A black power salute? I personally favour the theory that it's some maniac throwing a punch at the long legged beastie! Possibly for spilling his pint or maybe just "looking at me funny"!

Anyhow that's all for this week - next time we reach the penultimate pair of cards - a truly gruesome twosome!

Inspired by the camp monstrosity in the party frock, possibly, but quite a departure from it. A fair bit of imagination used for the green goddess. Not for The Thing, though, apart from the forearm.
It's quite sad that we're almost at the end of the deck. Wednesdays won't be the same. I think I'll start at the first post and go through again. Slowly.