THE 'ORRIBLE 'OUSE OF TERRIBLE OLD TAT - Taste the Lolly of Dracula! 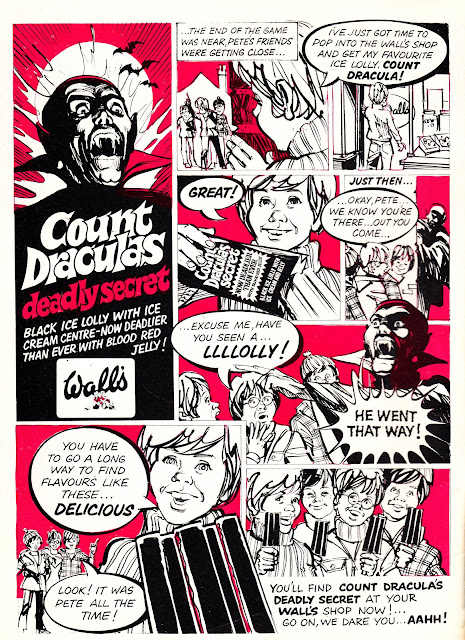 Hello dear fiends and welcome once again to the 'Orrible 'Ouse of Terrible Old Tat! In our past few trips in the chilly archives of the 'Orrible Old 'Ouse we've been looking at the weird world of 1970s ice lollies. Last week we saw how one of the twin titans of the British ice lolly market had struck gold with some spooky themed offerings, in particular the Haunted House lolly. But what were arch rivals Walls up to? Well, naturally they had something to also bring an extra chill to the freezer cabinet...

Now kids have always loved monsters and spooky stuff, but in the 1970s there seemed to be a multitude of scary things for kids (as documented in the marvellous book Scarred For Life that I reviewed here). Now Lyons Maid tapped into this horror boom firstly with the Jelly Terror and Haunted Houses lollies, and later with the Daleks Death Ray, Dinosaurs and King Kong lollies. And so they had pretty much covered all the usual scary fare bases - monsters, ghosts, aliens, and robots. However Walls did manage to fight back by resurrecting from the grave one of the most famous monsters of all-time - Count Dracula! 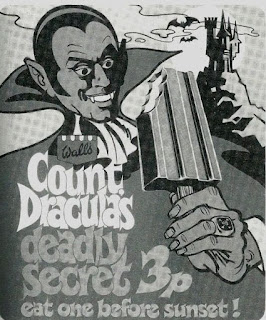 Now back in the early '1970s, the immortal vampire was riding high in pop culture. His then current cinematic biographers Hammer, had recently rebooted their movie series by bringing the Count to the present day in Dracula AD 1972 (1972) and The Satanic Rites of Dracula (1973), while Marvel Comics had done something similar in 1972 too with their monthly title Tomb of Dracula. And in 1974, this particular comic was to be reprinted in Britain as a weekly title called Dracula Lives by Marvel UK, something I'm sure was on the radar of the marketing department of Walls, for one of the prime places they advertised lollies was in the pages of comics.

So then, as no one technically owned the rights to the character of the Count, Walls were free to raise the old vampire from his grave once more to sell ice lollies. Retailing at 3p, Count Dracula's Deadly Secret (later shortened to just Count Dracula's Secret) was a lolly of "midnight black" according to the advertising blurb, which entombed blood red jelly and an ice cream centre. Quite what was so secret about it, no one is entirely sure - was it that the Count was secretly an ice cream man? Sadly we will probably never know... However this enigma didn't hurt the sales of the lolly at all, for Count Dracula's Deadly Secret was a huge hit and haunted the chiller cabinets for many years. 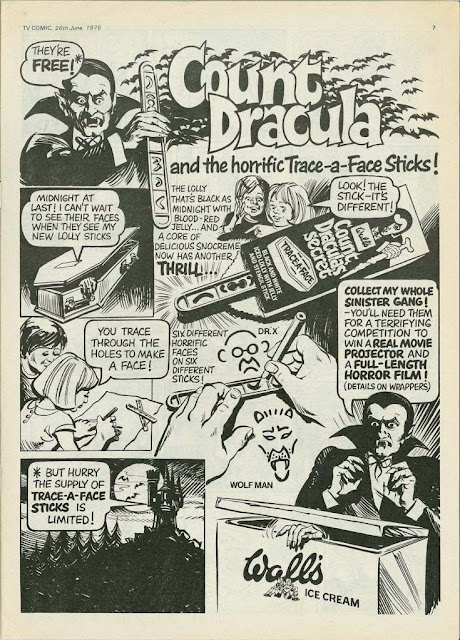 While most of the lollies we have discussed ultimately only lasted a summer or two, in 1976 Count Dracula's Deadly Secret was still going strong, and even got a new gimmick to keep the kids interested. Now while most lollies came on the traditional wooden stake, sorry, I mean wooden stick, over the years there were several experiments with plastic sticks moulded into assorted novel shapes. Hence in 1976, Count Dracula's Deadly Secret was now boasting it came on a Trace-A-Face stick - essentially a plastic stick that had shapes cut into it to make a stencil. The shapes in question were assorted eyes, mouths and noses so kids could make their own monster mugshots in a crude identikit fashion. Now to be honest, looking back the shapes weren't either very detailed or particularly scary, looking more like a moron's idea of Egyptian hieroglyphics than terrifying facial features from beyond the grave. But back in the day, it all seemed terribly exciting, especially as the adverts proclaimed that the Trace-A-Face sticks were in limited supply. 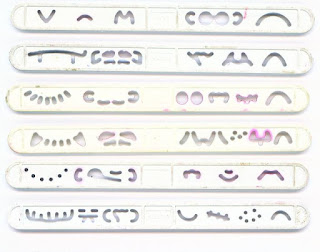 Meanwhile in the wider world of pop culture we had the BBC producing a memorable version of Bram Stoker's horror classic entitled Count Dracula for Christmas 1977, while in 1979 John Badham's all-star version of Dracula, with Frank Lagella as the Count and Sir Lawrence Olivier as Van Helsing, flapped onto the big screen. And also on the small screen, in 1980 Hanna-Barbera introduced us to a modern relative of the Count in The Drak Pack. And so with the Count being still big business, in 1981 Walls released a second version of their long-standing favourite. 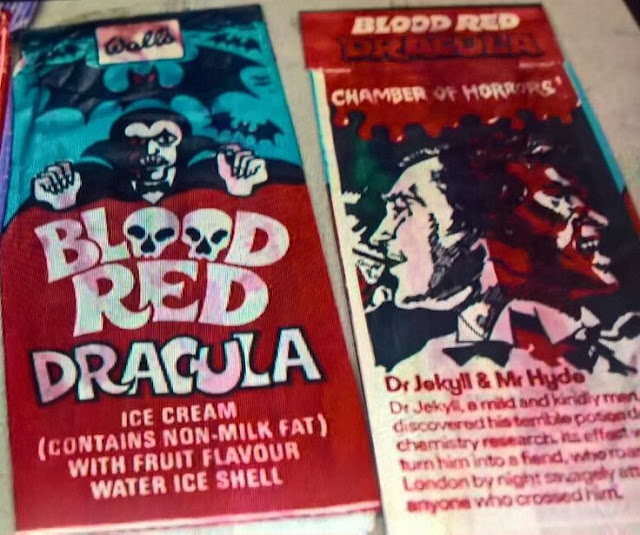 Taking advantage of new breakthroughs in lolly technology, the new Walls Dracula was an ice lolly actually moulded into the shape of the Count himself! Although it now came only with one flavour, strawberry, this new vampiric snack did carry on the noble tradition that had been begun with Count Dracula's Deadly Secret of staining your lips red. Sadly however this icy incarnation of the Count did not last so long.

However, as we all know, you can't keep a good man down, for in recent years Count Dracula has been spotted once again in freezers, now with a new cartoony look. In 2013, Unilever who now own Walls, responded to popular demand and resurrected Count Dracula's Deadly Secret, although now just under the banner of "Dracula Lollies". Yes, the Count will always rise up from the grave, and apparently that's true even in the world of ice lollies too... 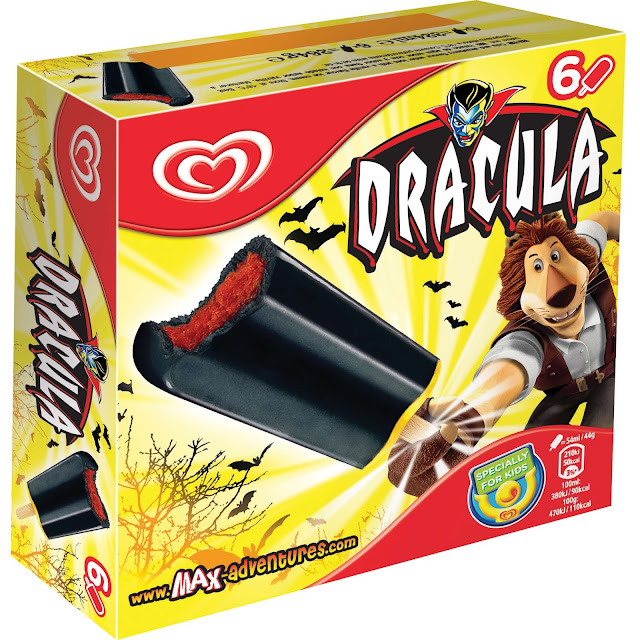