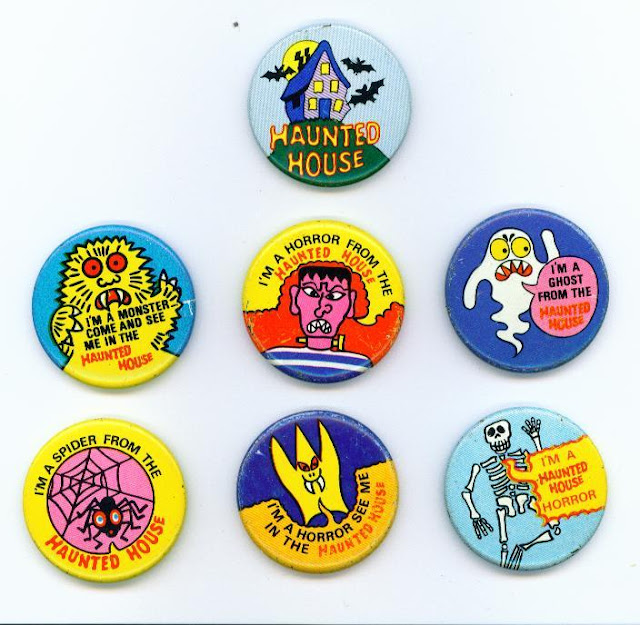 Welcome once again my dears to the 'Orrible 'Ouse of Terrible Old Tat! Incredibly in this septic isle it is actually still summer - yes, I know, a summer that has lasted more than a fortnight! Unprecedented! Well, possibly not, but certainly for such a heatwave one probably has to go back to the 1970s, which coincidentally, is exactly what we are doing once again this week! Don't fret though, while there may be lions, and tigers and flares (oh my!),  there will at least be ice cream!

Now ice cream itself goes back to the Ancient Greeks, and the ice lolly has been knocking about since the 1920s. However it wasn't until the 1960s that the great icy snack wars began, and these frozen treats were marketed in a host of flavours, with a legion of gimmicks (as we have previously charted in these dubious missives). Now in previous weeks we have looked at how in the early 1970s, lolly makers had hit on the idea of creating characters and mascots that tied to distinct themes to flog their wares to kids. However also around this time, the very way these chilly snacks were being made was changing. And although lollies were in rude health at the time, with a market supporting dozens of competing items, all the same, to paraphrase Oscar Goldman, they could rebuild them, they had the technology, and they could make them better than they were! Better, stronger, and even more gimmicky!

Now makers of lollies had been fusing different flavours together, and even making lollies in different shapes for quite a while. A recent breakthrough had been creating lollies with an ice cream centre and this would lead to the next leap forward - lollies made completely of ice cream and moulded in amusing shapes! An early hit in this new breed of lolly was the Brr Blobs from Lyons Maid. As the name suggests, the technology wasn't really up to creating a terribly exciting shape other than a roughly humanoid blob with an in-set smiley face, and they only came in ice cream flavour, but they were excitingly different. 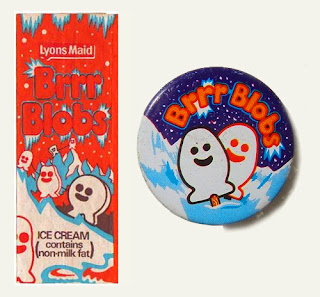 More ambitious moulded lollies were to come however, with Lyons Maid launching Dinosaurs in 1974. Priced 8p, these were formed from two pieces of ice cream, one chocolate and one vanilla, and as you might have guessed, were moulded into the shape of a mighty prehistorical saurian. Ok, the moulding wasn't exactly super-detailed, and in fairness they looked more like generic lizardy shapes, as seen by Mr Magoo sans spectacles. But on the upside, the wrappers came with exciting dino-facts on the back, making an attractive series to scoff and collect. 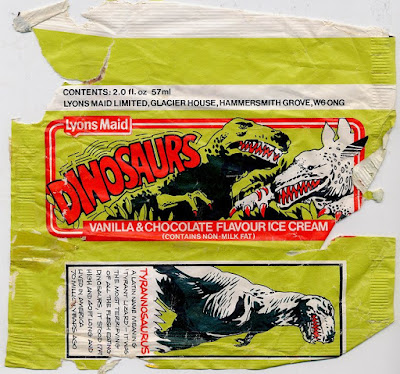 Arch rivals Walls it seems came late to the moulded ice cream lolly game. Possibly the technology wasn't quite good yet, for even Lyons Maid don't appear to have attempted another shaped ice cream lolly in the rest of the '70s. However when Walls did venture into the moulded ice cream arena, they did knock it out of the park. Launching in the early 1980s, the Funny Feet lolly was a deceptively simple and silly idea - an ice cream lolly shaped like a cartoon foot. And this combination of flavour and absurdity proved to be extremely popular, and when all other lollies aimed at kids had passed away, Funny Feet still endured.

However, back in the 1970s, another ice cream lolly is perhaps the most fondly remembered. In July 1973, Lyons Maid launched a lolly destined to live long in the freezer and indeed in our hearts. It didn't have a fancy moulded shape, although it did come with badges. But this lolly did have another trick up its monstrous sleeve. For this lolly was the fondly remembered and much missed Haunted House! 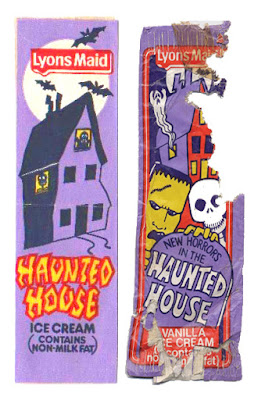 Now flavour-wise, Haunted House was nothing to write home about - it was just basically milky ice cream frozen onto a stick. But what made this lolly somewhat legendary was the fact each one had a picture of some horror stenciled on the ice cream in edible inks! Drawn in pink, orange, red, green and blue, there were different pictures on the lollies, with the marketing hook being that you wouldn't know which one was on until you unpeeled the wrapper. The full range was as follows - a ghost, a skellington, some bats, a spider in a web, Frankenstein's monster, a witch and something resembling a close relative of the Jelly Terror! Oh yes, Haunted House delivered a lot of fun for the 4p asking price!

And indeed, while its launch mates such as Captain Cody, Freakout and Freckles were forgotten in a summer or two, Haunted House still lived on, and indeed the memory of its simple but spooky fun is still cherished to this day. However Walls had noticed that the kids loved a monster too, and they would produce a rival icy horror... a lolly that came with a stick through its heart...

Great article Jim. May I borrow one of your images for an article I want to write on "Dinosaurs"?

Hi again Jim. I hope you don't mind but I didn't get a reply - here's the article

Certainly sir! Apologies for the delay - having a bit of trouble getting new comment notifications at the moment!

Thanks a lot, hope you liked it!