The 'Orribe 'Ouse of Terrible Old Tat - The Mysteries of Mastermind 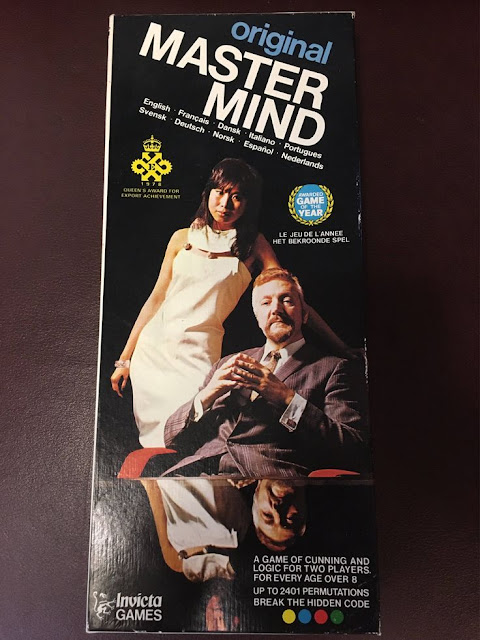 Welcome once again dear fiends to the 'Orrible 'Ouse of Terrible Old Tat! Now then, last time you popped over we were rummaging in the Old Board Games cupboard, and had uncovered the history of the international bestseller Mastermind - namely that this well-known game was actually an adaptation of an old pen and paper pastime called Bulls and Cows. However we didn't quite reveal all the secrets of this code-breaking game...

Bulls and Cows was a game which involve guessing a sequence of numbers, or in a popular variant, words. Now obviously any game involving numbers raises the spectre of mathematics, which for many folks is the polar opposite of fun. And therefore a key factor in Mastermind becoming a global hit was the simple but genius decision to replace the numbers with colours. To begin with this gives the game a visual appeal, but also the placing of multi-coloured pegs gives the game a pleasing tactile quality too. And it should be noted too that having a choice of six colours to create a sequence to be guessed by the other player actually cuts down the odds of guessing it correctly, hence making the game a little bit easier and more accessible for younger players. Now at this point I would to the maths to show the reduction in possibilites but you'd all stop reading. Such is the dread power of maths!

Anyhow, instead of scoring "Bulls or "Cows", the board game used a system of black and white pegs. A correct colour in the right place gets a black peg, whereas a correct colour in the wrong spot gets a white peg. Now the board in Mastermind has a number of rows for the player to make his guesses, and each row of peg-holes has an additional quartet of slots for marking the guesses. Dr John Billingsley, who played a key role in developing the game, cunningly decided that the marking holes should be placed in a square to disrupt the tendency for players to mark each peg in sequence, thus making the game a little too easy. 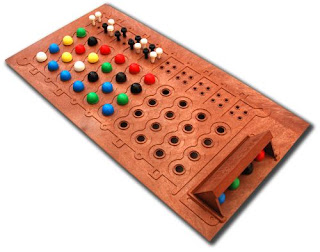 Now it was also Dr Billingsley that gave the game its name. And here lies one of the great mysteries of Mastermind. For around the same time as the board game hit the shelves, there was a hit TV show on the BBC in England which was also called Mastermind. Devised by a chap called Bill Wright, the inspiration for this quiz show was actually Wright's experiences in World War II being interrogated by the Gestapo! The show's format is both iconic and brilliantly simply - basically each episode sees four contestants face two rounds of questions. Each in  turn takes their place in a black leather chair lit only by a spotlight and faces two minutes of questions. The first round is on their chosen specialised subject, with the second round comprising of general knowledge questions. Winners of each show then go on to compete with each other until at each series's finale an overall winner is decided and awarded an ornamental glass bowl. And no, I'm not making that up! You really did only win a bowl.

Now the TV show Mastermind has something on an interesting history in itself. It first aired in 1972 on a Sunday evening in a late night slot. Given its cerebral nature, it was thought that the show would only ever have a niche audience - for there were no flashy prizes or big cash giveaways, and the questions were of a high level of difficulty. Not your usual quiz show in other words. However in 1973, the BBC found itself in a bit of a bind. A raunchy sitcom Casanova '73 which starred Leslie "Ding Dong!" Phillips had proved to be a bit too lecherous and had drawn a flood of complaints. After three episodes, a full scale public outcry was taking place and the Beeb decided to swiftly move the sexy show to a later time slot. However this snap decision to appease shrill self-appointed voices of the probably mythical Silent Majority such as Mary Whitehouse left a gap in the schedules. And so, as a stop-gap Mastermind was given the troubled sitcom's old slot. This was of course only meant to be a temporary move, but to everyone's surprise became a huge hit.

Now while competing to win a glass bowl by answering questions on subjects nobody at home knew a thing about might sound like the dullest thing ever, Mastermind was actually riveting television. To begin with we had that brilliantly atmospheric theme tune - a piece called "Approaching Menace" by British composer Neil Richardson - usual playing over a very simple title sequence that just showed the famous black leather chair lurking in its single spotlight. Whereas most quiz and game shows are wheeling out bright colours and the kind upbeat music produced by a surfeit of sugar and e-numbers, Mastermind could be mistaken for the opening of a dark thriller or even a horror movie! And while the original run of the show was hosted by the charismatic Magnus Magnusson, who managed to be both a genial and a somewhat sinister quiz master, the real star was always that infamous chair lurking in the dark. 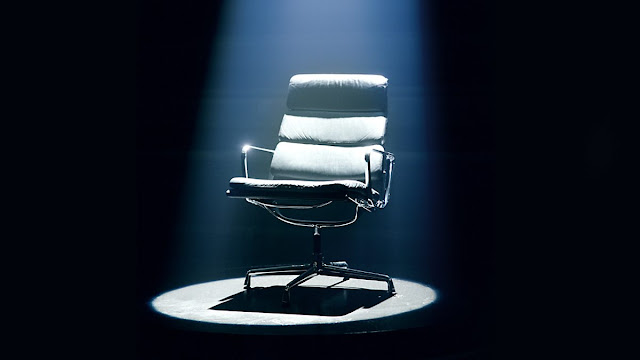 And what really made Mastermind such tense viewing was a very simple device employed by the show from the very beginning. And that was that as each contestant took their place in the ominous black chair and began their round of questions, the camera very slowly and oh-so-steadily zoomed in, so that by the time the buzzer sounded to mark the end of the round, the camera was squarely on the contestant's face. Filming the rounds in this way proved to be a stroke of genius, for it allowed to viewer to taste the rising tension of answering a barrage of relentless questions against the clock.

The show ran every year until 1997, when it was decided that perhaps old Mastermind was a bit long in the tooth. But you can't keep a classic off the air long, and while TV execs might have thought the show old and boring, audiences still loved it. After all, there was a very good reason the show had ran for a quarter of century with the only changes to the format being tweaks to the title sequence. Hence it was revived almost immediately on radio, then on the Discovery Channel with Clive Anderson hosting. And then in 2003, it returned to its rightful place on BBC 1 with John Humphreys as the host, where it is still running to this very day.

Now then, to get back to our original specialised subject of old tat, what has all of the above got to do with the board game? Well, that is in fact the very question that bedevilled generations of TV viewers and game players. Was there some connection between the game and the TV show? They had the same name, and given that the box showed a distinguished man in a darkened room, looking ominous, the game seemed like it was somehow related to the TV show. But that wasn't Magnus Magnusson sat in a stylish modern armchair chair! And he never had a beautiful assistant like the suave chap on the game box. Plus if the game was a tie-in to the TV show, why wasn't it effectively Trivial Pursuit a decade or so early?

Well now, at last we can reveal the truth! And what is more, once again it is down the Dr John Billingsley. As Mastermind the TV show was just becoming a huge hit, the good doctor provisionally entitled the new board game with the same name, never thinking that it would hit the shelves with that monicker. Our genial boffin assumed that there would be all manner of legal difficulties and another name would be chosen for the game's release. However the makers of the new game Invicta loved the name and went with it, and somehow the BBC never challenged them over the use of the same title. Possibly if the game had featured questions and a quiz the BBC might have had something to say about it, but I suspect the prevailing thinking at the time was that "mastermind" was simply a term in common usage and no one, neither Invicta nor the Beeb, could lay claim to it. 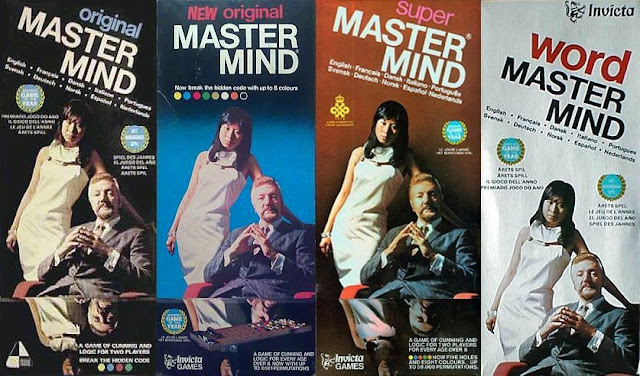 However, who was that chap in the chair? Well, there's an interesting tale too. Given the name 'mastermind' and the brief that this was a code-breaking game, the marketing folks thought they'd invoke a James Bond/spy vibe, and so started looking for a suave-looking gent, a beautiful girl, and also hired a cat. The original model they had booked didn't turn up, so a local man who ran a string of hairdressing salons, Bill Woodward was suggested at short notice to fill the chair. And with his neatly trimmed beard and sharp suits, Bill certainly fit the bill. Likewise his glamorous companion was also a bit of chance casting. The mysterious lovely lady was Cecilia Fung, who at the time was studying computer science at Leicester University - a rather nice coincidence that chimed with the game's origins in a computer version called Moo! Cecilia was literally stopped in the street by folks from the modelling agency and offered the job on the spot, and being a struggling student she jumped at the chance.

And thus history was made! The iconic cover photo looked intriguing, glamorous, and stylish - with the aura of sophistication and mystery it generated, it undoubted it helped the game become the global smash it was. Bill Woodward did many promotional tours for the game, so much so that at one stage he had "Mr Mastermind" on his passport! However more than a few players over the years were perplexed to discover the game rules made no mention of this suave fellow and were left wondering who he was and what was his deal? Was he an M type of guy, giving the orders for secret missions? Or a Blofeld, plotting some nefarious scheme? In fact, they were going for a Bondian supervillain look, hence the hiring of the cat. Bill later recalled that several shots were taken of him holding the kitty in full Blofeld mode, but in the end it was decided to ditch the moggy. However unfortunately that wasn't before the cat itself had registered its own unique protest against the concept by pissing all over Bill's trousers.

Sadly now, although you can still buy Mastermind, made by Hasbro these days, the iconic packing featuring Bill and Cecilia has now gone. And I can't help feeling that the game has lost some of its mystique and magic with this departure. However I am willing bet that if they were reinstated on the box, there would be a sharp spike in sales, for I am sure that that mysterious air of style and sophistication would once again have prospective buyers picking up the game just to find out who they were. Rumours that the cat is now lurking in a secret volcano base of its own and plotting world domination are entirely made up by me just now. 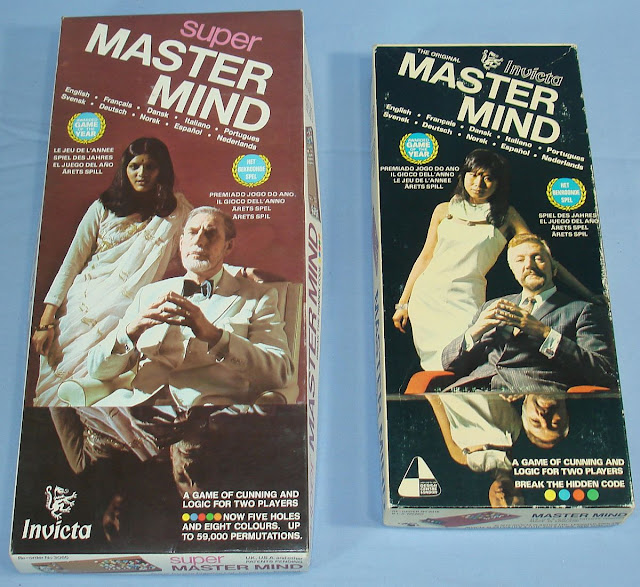 That brought back some memories! We had a copy of the game, although I remember, as a nipper, thinking that it must have been fiendishly difficult to play, and sticking to "Game of Dracula" and the like :)

No mention of the Mastermind TV show, incidentally, is complete without this clip, I reckon;
https://www.youtube.com/watch?v=HEjdJszBbY8