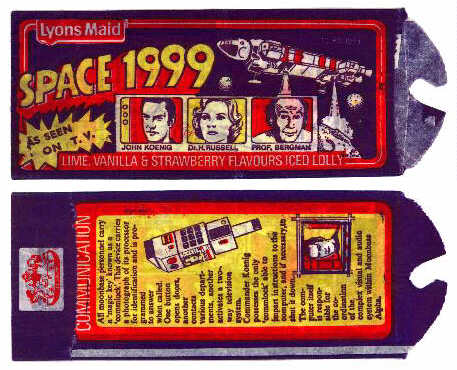 Welcome once again dear fiends to the 'Orrible 'Ouse of Terrible Old Tat! Well, it's still summer, or so I am told - to be honest, it's hard to tell with all the rain! However I'll take it on good faith and use it as the flimsiest of excuses to once more bang on about some novelty ice lolly tat! Now where were we in this unofficial history of frozen gimmicks and frosted crap?

Ah yes I remember! We were looking at the practice of not just tieing-in brands to your wares but actually inventing lollies to bear the brand, and last time we were charting the rise and fall of a host of '60s lollies produced in a strange chiller cabinet symbiosis with Gerry Anderson puppets shows. To briefly get you up to speed, in the early 1960s when the ice lolly industry was in its infancy it seemed like a smart gimmick to create frozen snacks that were not just running tie-in promotions but were in themselves a tie-in to a popular brand. However the frost giants Walls and Lyons Maid soon realised that while this sold many a lolly in the short term, what was popular in the playground tended to have a shelf life of only a few years. Hence rather than having to create and market new lines of branded lollies every couple of years to keep on getting a significant slice of the pocket money market, it was better to create lollies not yoked to the shows and characters du jour. Hence the early '70s saw the rise of competing flavours with snappy names and strong images of their own.

However, as is often the case, these kind of  things tend to go in cycles, and by the end of the '70s, branded lollies came once more into vogue. And in the icy palaces of Lyons Maid, it started in a small humble way with a range of fruit flavoured lollies, aimed at the under tens, and branded as frosty incarnations of popular cartoon characters. In 1971, Roger Hargreaves published six little story books with simple but eye-catching illustrations, and thus the Mr Men were born. The books were a huge hit and in 1974, they were were adapted and animated as a TV series narrated by the great Arthur Lowe, propelling the book series to new heights of popularity. 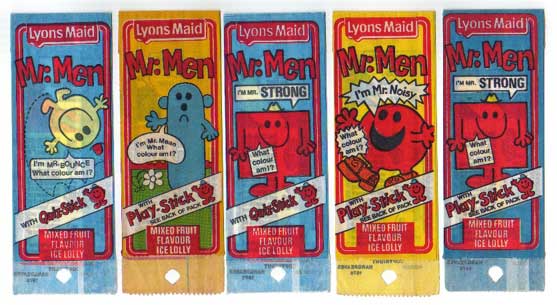 Hence in March 1976, Lyons Maid launched the Mr Men ice lollies. Priced a 4p, these little lollies came in a rather vague sounding "mixed fruits flavour". But they were never designed to sell on their taste, rather the opening gambit was that one of six different Mr Men would be revealed when you opened the wrapper.  OK  not earth-shatteringly exciting but clearly they went down a treat with the playground crowd as the range would endure for several years. And while they retained the less than appealing 'mixed fruit flavour', later incarnations would have different Mr Men on the wrappers and boasted novelty sticks with jokes and wrappers with little activities such as quiz questions on them.

Evidently emboldened by the sales of the Mr Men lollies, Lyons Maid were quick to release two more branded lollies later in 1976. Having got the younger end of the market sewn up by Mr Tickles and his pals, the Sinister Three Dancing Children who ran Lyons Maid launched two more lollies aimed at capturing old kids' pocket money. First was a lolly cashing in on the huge success of The Six Million Dollar Man, and hence in the summer of '76 you could enjoy the Bionic Lolly! This was a lemonade and spearmint flavour affair that mercifully didn't cost six million dollars, and could be yours for a mere 8p. ,

I'm not sure whether it was down to Col. Steve Austin's star burning too bright and too fast, but there doesn't seem to have been much fuss or gimmickry wheeled out the Bionic Lolly. And I always thought that the portrait on the wrapper looked more like the late great Martin Landau than Lee Majors. And that might have had something to do with the fact that around the same time Lyons Maid launched the Space 1999 lolly.

Boasting bold lime, vanilla and strawberry flavours, plus a soft centre, this was clearly a better class of icy snack from the off, and what's more, it was a penny cheaper than its Bionic rival. Furthermore the Space 1999 lolly came with free picture cards to collect! And there was even an exciting TV ad with bespoke cartoon action to plug the next arrival too!

Clearly old Gerry Anderson had a far better grasp of the tie-in lolly business than Oscar Goldman. He might not have had a TV in his briefcase, but Gerry knew what shifted lollies! And while the cards might have featured some dubious artwork, kids loved 'em. However all of this was just the beginning, for the following year in 1977, something would come out that was to change the face of merchandising forever, something from a galaxy far far away... 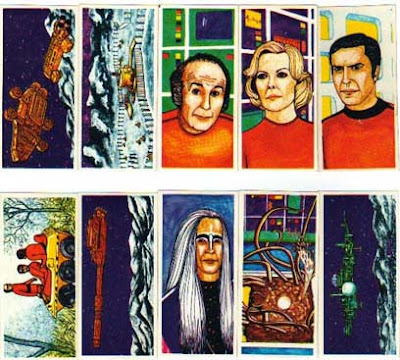 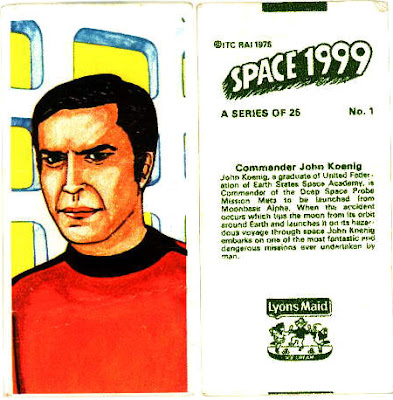