THE 'ORRIBLE 'OUSE OF TERRIBLE OLD TAT #18 - It Came From Beyond the Chiller Cabinet... Or Possibly Skaro (Slight Return) 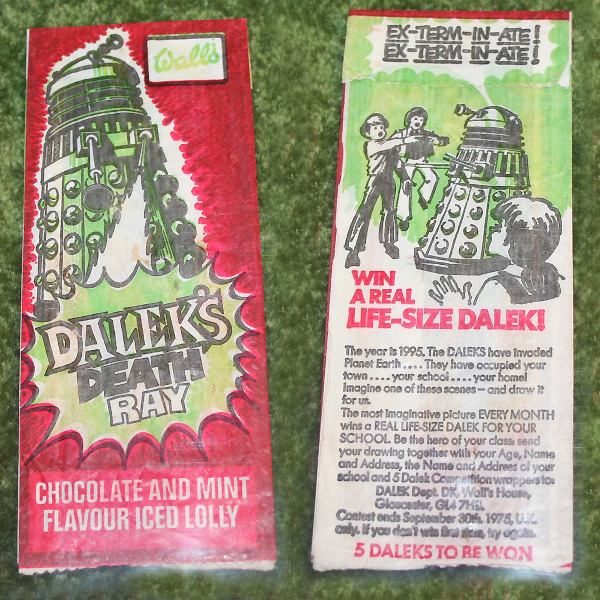 Welcome once again dear fiends to the 'Orrible 'Ouse of Terrible Old Tat! Now then, on your past few visits, we been hanging around a vintage freezer and exploring the weird and wonderful world of ice lollies of yesteryear. Last time we saw how the long-running Sky Ray lolly had a hugely successful tie-in with Doctor Who, and this week we are looking at a time when the lolly world once again caught a dose of Dalekmania...


As we have previously documented, well at least in the slack arsed mixture of trivia and flippant remarks that passes for historical research around here, the 1960s were the beginning of the Great Lolly Wars, a groovy time when many corner shops gained a chiller cabinet, which in turn played host to a new wave of frozen confectionary and icy snacks. Now it didn't take long for the highly competitive new market to realise the power of the tie-in, and as well as the previously discussed Doctor Who promos, there were other tie-in campaigns with properties popular with the pocket money crowd. For example, the Orbit lolly had a tie-in with Captain Scarlet, the Sky Ray rival Zoom allied itself with another Gerry Anderson Show Joe 90, while the Fab lolly rather cleverly featured Lady Penelope and Parker from Thunderbirds on its wrappers for a time. 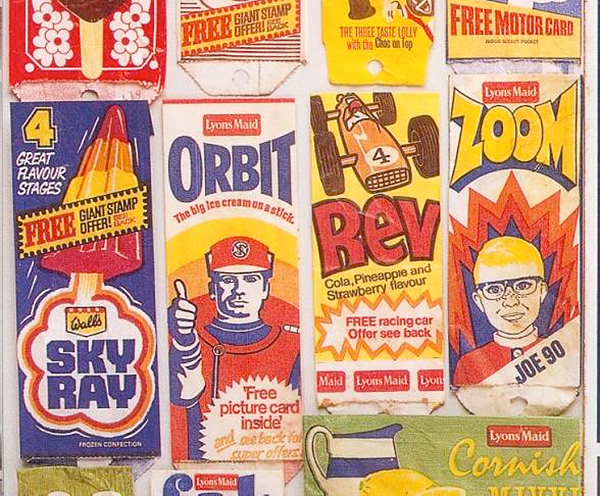 However in the 1970s, the lolly makers would change tack. Throughout the '60s numerous new species of lollies had been concocted, but few ever lasted more than a few years. So then instead of trying to breathe new life into an existing lolly, one that was already looking a little long in the tooth, with some tie-in promotion, they hit upon the idea of cutting out the middle-man and launching lollies directly branded to the tie-in property. And one of the earlier and finest examples of this approach hit the shelves, well the chiller cabinets in 1975.

Now in the closing overs of 1974, a new Doctor had taken over the TARDIS, with Tom Baker beginning his long-running tenure of the role. And this newly minted Fourth Doctor would meet some old enemies in his first season, most notably with a six part adventure now regarded as one of the great classics of the original series - Genesis of the Daleks which aired in March and April 1975. This tale not only introduced the iconic villain Davros, the twisted genius who created the Skaroine terrors, but also kicked off a fresh wave of Dalekmania. 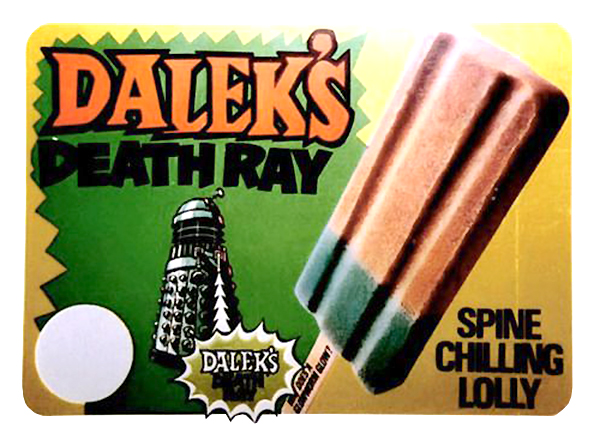 As we heard last time, lolly giant Walls had made a pretty penny in the first great wave of Dalekmania back in the mid '60s with their Sky Ray tie-in. However while Sky Rays were still rocketing out of chiller cabinets throughout the '70s (and indeed into the '80s too), rather than dust off the old market strategy, instead the boffins at Walls' secret labs created a brand new lolly just for the Daleks! Sporting a tasty combination of mint and chocolate ice cream, in 1975 the Dalek's Death Ray hit the shops!

Now many of these kinds of novelty brand lollies never lasted long, however the Dalek's Death Ray terrorised the nation's freezers for three glorious years. However apart from having a great flavour - which is more than can be said for other tie-in lollies I could mention), Walls cunningly made the wrappers of these lollies collectible in themselves. The first wave of Death Rays in 1975 - retailing at 5p! -  came with three variants - 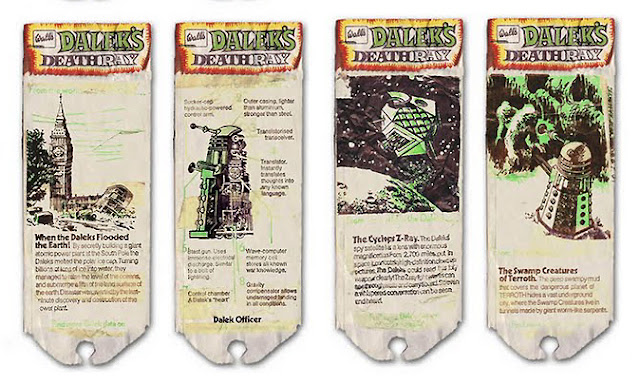 However the following year, in 1976, Walls started branding the lollies with the tag-line "From the World of the Daleks", and launched a series of wrappers to collect, that featured art and text all about the Daleks. Here a listing of the full series - 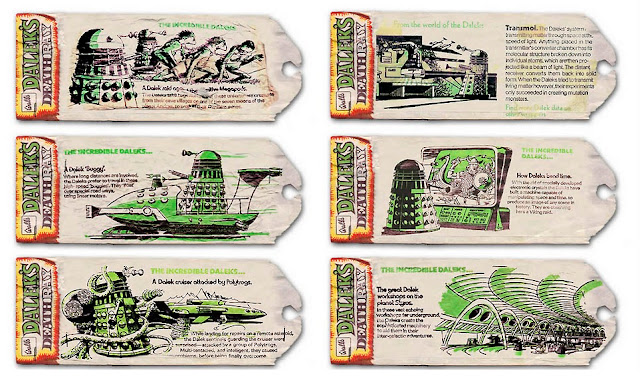 And in 1977, Walls repeated the same trick, with Dalek's Death Rays now featuring a series of wrappers detailing "The Incredible Daleks" - 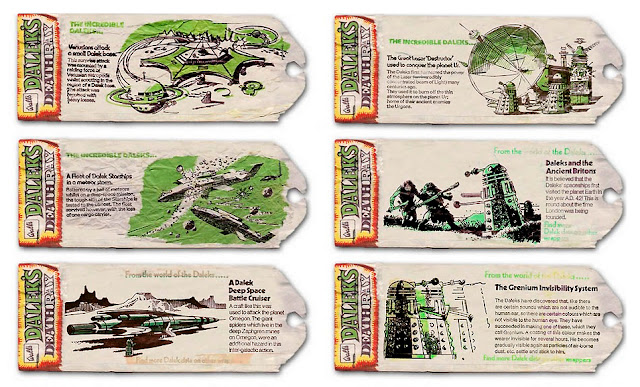 Now on the face of it, it might seem that these collectible wrappers were something of a step down from the '60s Sky Ray tie-ins, which boasted individual, full colour cards to collect, plus send-offs for books and badges. However while it was undoubtedly a cheaper promotion, it did have some advantages. Firstly the smaller number of wrappers - 8 in the From the World of the Daleks range, and 7 in The Incredible Daleks - meant that it was far easier for kids to collect and complete their sets - by way of contrast the '60s Sky Ray lolly promo featured a whopping 36 cards. Secondly they were also easier to collect - the earlier cards that you had to buy sight unseen, whereas with these, you could just sort through the lollies in the shop and select the wrapper you didn't have.

And I have no doubt that if the Daleks had appeared again on TV in the late '70s, this rather tasty lolly would have lasted longer too. But as it was, the Doctor was not fated to meet his oldest foes again until 1979 in Destiny of the Daleks, and hence with no new appearances to stoke the fires of Dalekmania, sadly the Dalek's Death Ray never returned for the summer of 1978. Of course, by then there was a  new kid on the scifi block and naturally that summer the chiller cabinet was visited by a lolly from a galaxy far far  away... But that's another story!

The Dalek Officer doesn't even have space for a Kaled mutant inside it!