THE 'ORRIBLE 'OUSE OF TERRIBLE OLD TAT #17 - It Came From Beyond the Chiller Cabinet... Or Possibly Skaro 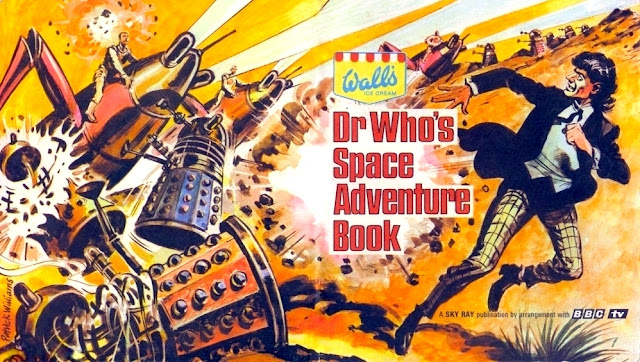 Welcome once again to the 'Orrible 'Ouse of the Terrible Old Tat! That's it, come in! Be careful not to trip over all the dropped 'H's mind... Anyhow, what can I get you? Cup of tea? Pack of hedgehog flavoured crisps perhaps? No? Well, at risk of sounding like the Child Catcher from Chitty Chitty Bang Bang, can I offer you a lolly?

Now then, last time we were taking a look at some of the cunning promotions employed to hawk one of Britain's longest-lasting species of ice lolly, the space age Sky Ray from Walls. Now in the mid-60s, this rocket-shaped delight had offered assorted merchandise under the name of Moon Fleet, a kind of pretend NASA for the nation's kids. However later in the decade, in 1967, Walls changed tack and netted a very lucrative tie-in deal indeed. For there was a new figure in the world of SF, an eccentric fellow who travelled in a blue box...

The timing of this Sky Ray tie-in is very interesting, for it comes at the beginning of the Second Doctor era, just as Patrick Troughton was taking over the reins from William Hartnell. Now aside from the excitement this first regeneration brought, the show itself was changing direction too. Hartnell's Doctor had met many strange creatures and interplanetary folk, but he had also journeyed into the past, encountering famous figures, and providing some educational history in a dramatic guise. However in the Troughton era, this sort of story - dubbed  "historicals" by fans - was to disappear. And in its place came more monsters and alien invaders, and the show pioneered what we now refer to as "the base under siege" story line. Of course, the most famous of the show's monsters were the Daleks, and it's no coincidence that the first season of the Second Doctor's adventures featured not one but two Dalek stories, Power of the Daleks  at the beginning, and Evil of the Daleks at the end.

We should also note that in licensing terms the Daleks were very much their own brand. Their copyright belonged to their creator, Terry Nation, who had quickly spotted the market for merchandise. Hence by the time the Sky  Ray promotion came around there were already Dalek branded toys, badges and books, produced separate from any Doctor Who paraphernalia. Hence this Sky Ray promotion was effectively a double tie-in! 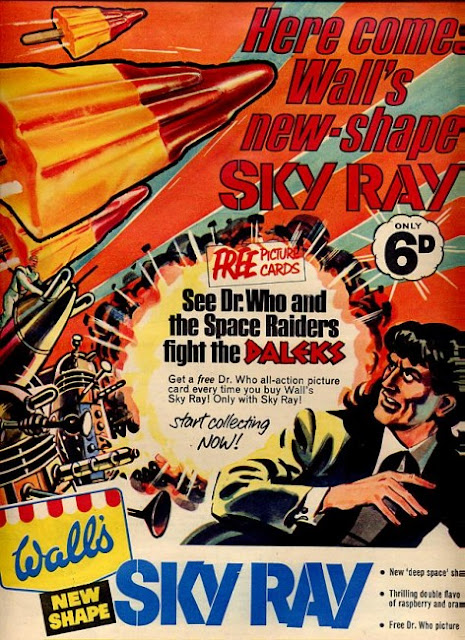 But what of the promotion itself? Well as you can see from the full page, full colour advert reproduced above that appeared in comics such as in the legendary Eagle, this was a two part deal. Firstly each lolly came with a full colour painted card, and secondly by collecting wrappers you could send off for Doctor Who's Space Adventure Book. And in this tome, there were puzzles, Dalek facts, a board game, and of course, pages where you could stick in all the cards and read the story behind the pictures! All of which added up to a double bonus for Dalek fans and lots of repeat sales for Walls as kids collected the cards and wrappers. And thanks to the magic of the interwebs, you can see the full set of cards mounted in a book here 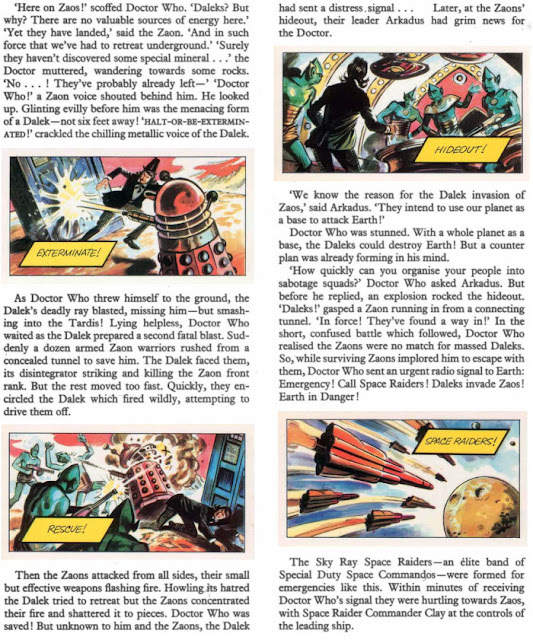 As you can see, the actual Sky Ray lollies themselves turned up in the tale as the vehicles of the Special Duty Space Commandos! A very nice touch! Yes, the Daleks apparently did once have to fight a bunch of interstellar ice lollies! And you thought the Movellans were rubbish enemies!

However it has to be said, the Doctor doesn't exactly closely resemble Patrick Troughton. Some have wondered whether the art was originally done when Hartnell was still the Doctor and hastily (and not very convincingly) altered at the last minute. Of course also by this time, there had been two big screen Dalek movies, starring Peter Cushing as the Doctor, so possibly the somewhat odd looking Doctor is a three-way hedged bet - sort of like a Fly style transporter pod accident involving Hartnell, Troughton and the Cush!

The campaign was also promoted heavily on the TV, and you can see the original ad here -


And yes, that's not dear old Pat Troughton either! The chap doing his best to hide from the camera is a fellow called Gerry Grant apparently - who surely must take the prize for the most obscure and briefest performance as the Doctor ever!

However this wasn't to be the only time that the Daleks invaded the nation's chiller cabinets... Next time, we'll voyage into the 1970s, to a time when a trip to the corner shop could bring you face to face with a Dalek death ray! 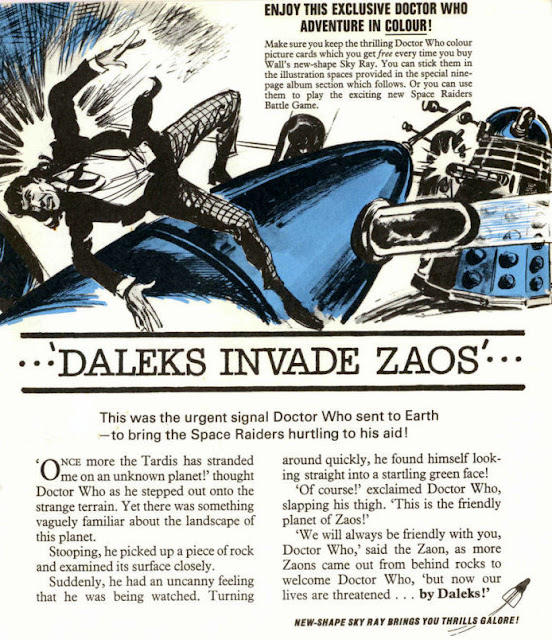