THE 'ORRIBLE 'OUSE OF TERRIBLE OLD TAT #16 - It Came From Beyond the Chiller Cabinet Again... 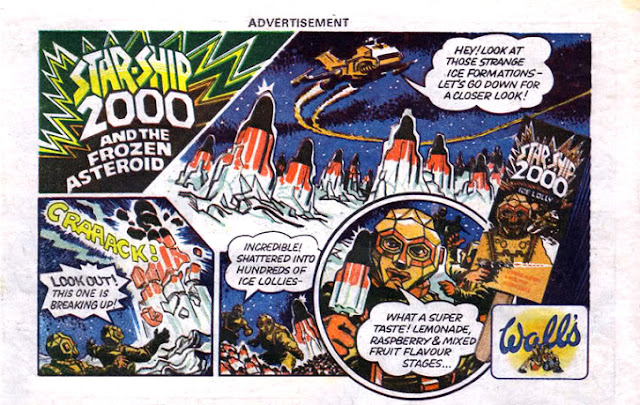 Hello again dear fiends! And welcome once again to the 'Orrible 'Ouse of Terrible Old Tat! Now then, currently we are sweltering in the kind of freak heatwave that was once a sure sign that a super villain or invading aliens were messing about with a weather machine! If this was 1970, I'd give you good odds on either Steed and Mrs Peel, or the Brigadier and the boys from U.N.I.T. turning up at any minute to sort it out. However the sad truth is that this is now what laughable constitutes the summer British summer... But on the upside, it is also one of those rare occasions when we are quite glad that the benighted halls of the 'Orrible 'Ouse are so draughty for once. However all the same, given the extreme temperatures, do you fancy something from the freezer

Last time we met we were discussing the Great Ice Lolly Wars, and as promised, today we are having a look some relics from those golden days when manufacturers of chilled goods attempted to prise the pennies out of kids' pockets with any gimmick they could think of. The first and most basic approach was to create a lolly that reflected the zeitgeist, or at least if not the spirit of the age, the spirit of the playground du jour. Now in the '60s, the world was buzzing with talk of the stars - satellites and space probes were being launched with great regularity, there was a serious race to reach the Moon, and pop culture was awash with scifi. Hence ice cream titan Walls was quick to capitalise on the fever for all things spacey, with a ice lolly called the Sky Ray. Now taste-wise this was very much the usual affair - a couple of fruity flavours in colourful bands, frozen in ice on a stick. However the Sky Ray's main attraction that this was a lolly for the space age, as it was shaped like a rocket ship. Well, sort of... 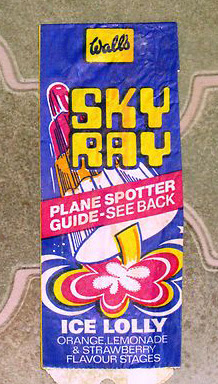 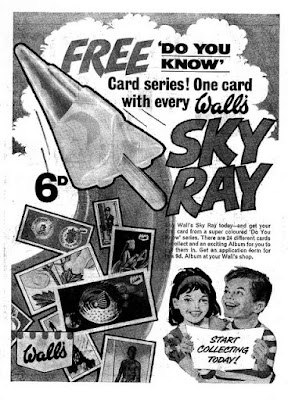 Now this might sound a bit flimsy, but in the cut-throat world of the Lolly Wars where new brands frequently only lasted a summer or two, this interstellar gambit proved to be a winner. So much so that, arch rivals Lyons Maid even produced a lolly of almost identical flavours and shape called the Zoom. However this particular space race was to be won by the Sky Ray, which outlasted the groovy space-age fads of '60s, continued to flourish in the '70s, survived a brief rebrand as Starship 2000, and was still to be found in chiller cabinets in the late '80s. And make no mistake, the Sky Ray's success was nothing to do with its flavours. Originally it was composed of two "stages" of fruity ice, orange and strawberry, but later became more rocket-like with three tiers (at one point orange, strawberry, and lemon and later orange, strawberry and lemonade).

Obviously Sky Rays had to taste at least a little bit nice, for after all, a lolly that put you in mind of licking dog widdle off thistles wouldn't last long. But it wasn't what the Sky Ray delivered to the tongue that made it such a long-lived success. And indeed, it's rarely the flavours that people remember about it. No, what was important was what the Sky Ray promised the imagination. This was a lolly that looked to the stars, the iced snack choice for a generation of kids who believed they'd be taking a rocket to work, living on the moon, and bossing robots about. Now the marketing boffins realised that very quickly indeed... 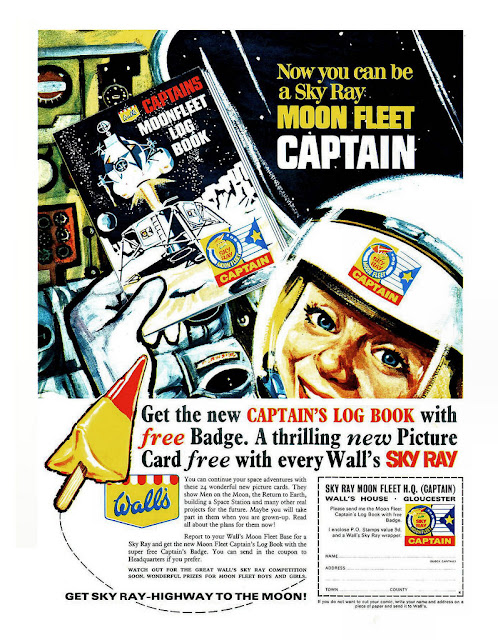 ..And thus the Sky Ray Moon Fleet was born, a series of promotions designed to capitalize on the lolly's intergalactic image. By collecting wrappers and whatnot you could send off for a series of fun Moon Fleet merch, such as badges, books and even a space outfit! And very fine they were too - so much so that Moon Fleet items now bring in very handsome prices, which no doubt helps to cushion the retirement of aging Moon Fleet personnel everywhere who are still slightly annoyed not to be voyaging the dripping forests of Venus. 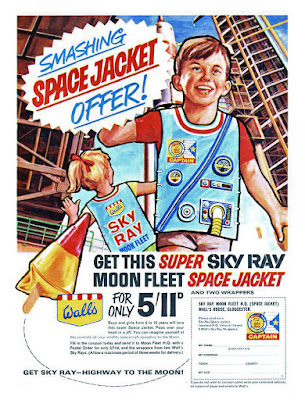 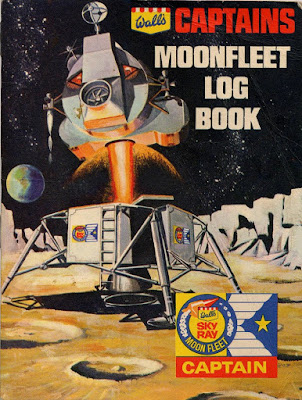 Over the years, Sky Ray had other promotions - for example, feeling that perhaps the space thing was played out at the end of the 1960s, they did have a series of promotions tied into stamp collecting. But despite inventing a not-so superhero to promote the joys of philately, this particular era of Sky Ray history is still overshadowed by the campaign that followed on from the Moon Fleet promotions... For those canny folks at Walls netted a tie-in to the biggest SF craze going. And we'll have a look at that next week! 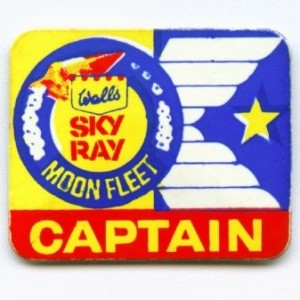 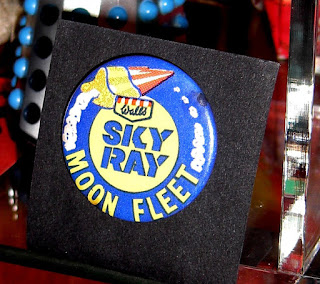