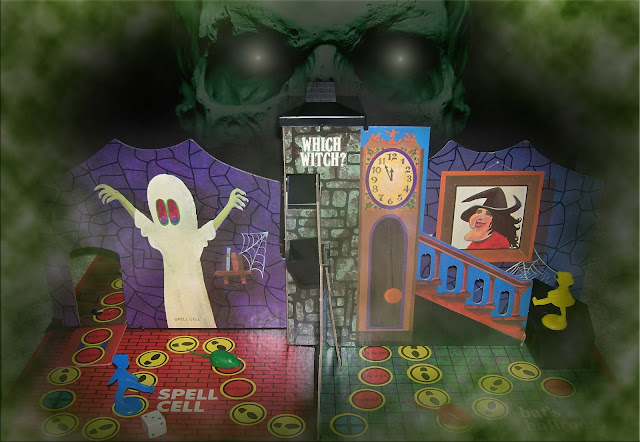 Welcome back to the 'Orrible 'Ouse of Terrible Old Tat! Now then, where were we? Oh yes! I remember! I was going to  tell you why Which Witch AKA Haunted House AKA Ghost Castle (to name but a few) was such a brilliant game! Now where is the damn board?

Now the first ace thing about this game was the fact it featured a three dimensional board. Now this was completely brilliant for several reasons. Firstly, it did what it said on the tin as they say in the adverts.  For there has always been games that sounded incredibly cool, often coming in fancy boxes with amazingly exciting cover art with explosions, and dinosaurs/robots/ pirates galore. However when you got them out the box, you discovered this was yet another exercise in rolling dice and moving dull counters around an arbitrary track - an activity that fell WAAAAAAY short of the exploding dino-pirate-bots fun promised on the box. However this long-lived board was different - you actually got to build a haunted house/ghost castle! And thanks to clever designs and great art on the board, it looked even better in real life than it did on the box! Result!

Better still though, it didn't take thirty years to set up. All the pieces slotted together quickly and easily, and in no time at all you were all set to race your chums round the spooky edifice. Yes, there was none of that taking about half an hour to set the game up for roughly two minutes of gaming fun... Yes, KerPlunk, I AM looking at you! Now, this was a game with exciting moving bits that did all kinds of thrilling things during game play, and unlike similar board games, in this one they all bloody well worked properly too! Yes, you may well hang your head in shame Mouse Trap! 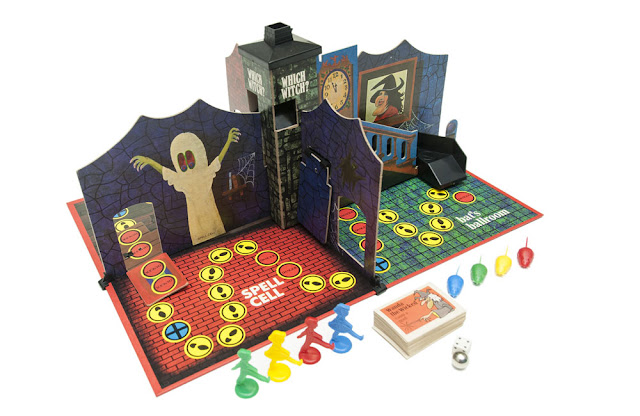 the original Which Witch/Haunted House

So what about the actual game itself? Well at first glance, the game mechanics appear to be very simple - players race each other round the board to get to the end first. Indeed if we are looking for an ancestor for this game, its grandfather is surely that enduring classic Snakes and Ladders. For like that well-loved game of climbing and sliding, Which Witch/Haunted House/Ghost Castle made the race fun by including horrible hindrances and fiendish obstacles. And here is where the magic comes in...

Now the board is divided into four spaces, indeed in the older versions of the game, four rooms in the spooky old house. These were in the vintage incarnation labeled as the Broom Room, the Witchin' Kitchen, the Spell Cell and the Bat's Ballroom. From the 1975  onwards with the revamp New Haunted House, the game would ditch the first room and replace it with an outdoor scene where you had to make your way up to the ghostly castle/haunted house. And while the decors and some of the traps in the rooms would change over the years, in all versions in the final room is a staircase... a staircase to victory! Well, the Charmed Circle to end the witches' spells in the early versions, and the Coffin to close to end the hauntings in later ones at any rate. 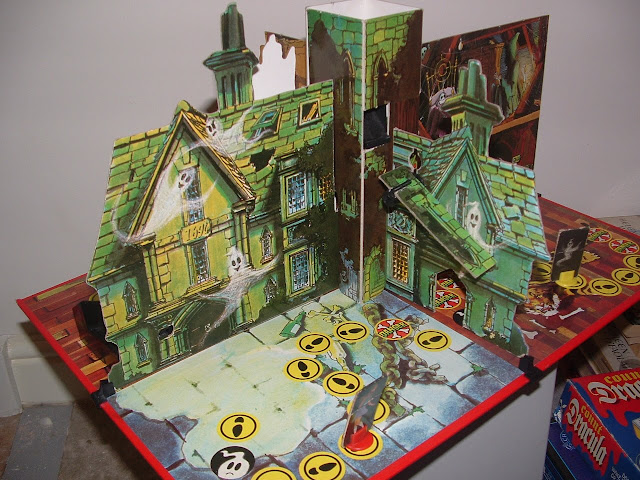 Of course to get to the end before your competitors was never simply a matter of rolling more on your turn. For as well as moving, you had to draw a card (in the earlier versions) or spin the Spider spinner (Ghost Castle onwards). Now the original deck of cards gave you three possibilities. The card Wanda the Witch Casts a Spell meant your player was transformed into a mouse and could not move, While drawing Glenda the Good Breaks the Spell meant that you were de-mouseyfied and could move again. Later versions, which ditched witches, had a tweak to this - instead of becoming mice, players were scared stiff - signified by a spooky frighted face that slotted over your player piece.

But most ominously of all was Ghoulish Gertie Drops It Down the Chimney (a phrase that never failed to raise hilarity in our house). This meant you got to the Whammy Ball (in reality a large steel ball bearing) - or a later versions a glowing plastic skull - down the chimney. This ominous object would then rattle down through the core of the spooky edifice and drop out into one of the rooms to trigger a trap or simple to send your piece flying! If you were hit, you had to go back to the start of that particular room. Now as I said, the beauty of this game was that all the cunning traps actually worked rather well, and what's more you could never predict where the deadly missile was going actually to pop out. Hence there was always a chance you might scupper your own progress if your piece was on one of the danger spots in the track through the house. 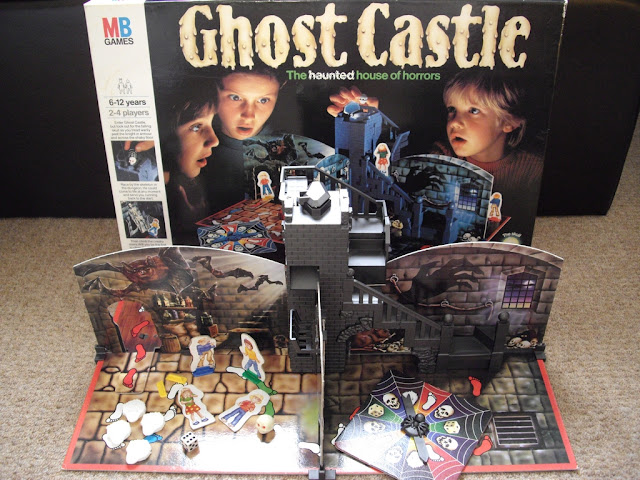 The classic edition of Ghost Castle!

Of course all of these elements added up to an extra bonus feature by accident. And that was if you didn't want to play the game, the game board doubled up as a rather fun haunted house playset for any action figures or toy soldiers you fancied pitting against ghosts or witches! Certainly several battalions of Airfix's finest fightin' folk met horrible deaths investigating a certain haunted house in my bedroom...

So then if you are a games designer looking to create something that will still be on the shelves in five decades time, bear in mind the following features. Make your game fun and quick to set up - this guarantees it will be played with frequently. Secondly make the rules simple and quick to learn - there's nothing worse that a cool looking game that requires a Masters degree in Law to interpret the rules. And finally, make it dynamic and as exciting as it sounds! In addition to these first two factors, which are very important in themselves, the crucial thing that this classic board demonstrates, and probably the main reason for its continuing longevity, is that it delivers what the box promises! Something we shall find severely lacking in some of the other toys and games lurking in the 'Orrible 'Ouse of Terrible Old Tat... 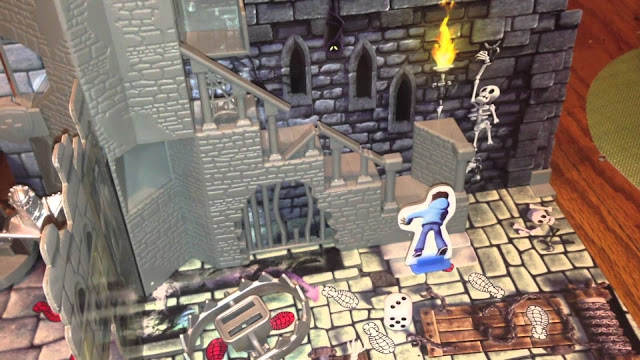 The current version from Goliath Games