In the last few little articles, we have been examining the strange lore of stones that move. We have had tales of revolving rocks and stories of meandering megaliths which go off for a wander at night. However compared to some legends, these stones that won't stand still seem positively sedate. For apparently a huge number of standing stones in the British Isles are somewhat on the energetic side on the quiet!

However this isn't perhaps that surprising given the number of ancient stones which were , according to legend at least, once living beings. A common trope in stone lore is that certain solitary megaliths or stone circles were once folks who were literally petrified. And perhaps the most famous example is the legend concerning the Rollright Stones. This celebrated array of ancient stones stands near the village of Long Compton, on the borders of Warwickshire and Oxfordshire, and comprises a single megalith dubbed The King Stone, a circle  known as the King's Men, and a dolmen called the Whispering Knights.

And of course there is an old tale to explain these names. Once upon a time,  a king had gathered together a powerful band of warriors in order to conquer all of England. However as he assembled  his troops, a witch appeared who cryptically pronounced -

Seven long strides shalt thou take
And if Long Compton thou canst see,
King of England thou shalt be.

However our ambitious king wasn't going to let the words of some mad old crone deter him, and he replied in kind -


Stick, stock, stone
As King of England I shall be known.

However when he took the seventh stride towards Long Compton, the witch spoke up again, intoning these fateful words -

And so it was, and hence the Rollright Stones came into existence. And it is said that one day, the witch's spell will be broken and the ancient king will once again march to take the throne of England. Or at least, so the old story goes. Needless to say, archaeologists beg to differ, and offer a very different version of events. However according to local folklore, it would appear that the witch's spell is perhaps not as strong as it might be, for it is claimed that at midnight, the King's Men are restored to human form, and dance around in a circle. But apparently to see this sight will bring the observer either madness or death. 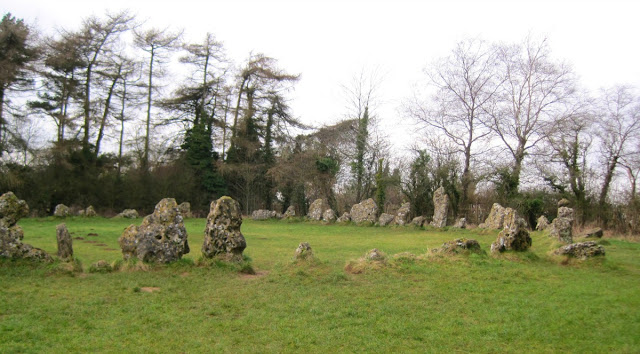 Now this legend first appeared in print in Camden in 1586, and several more versions soon appeared. As was often the case with 16th century publications such as ballad sheets and chapbooks, if one proved popular, further versions, often by pirate publishers cashing in, soon appeared, and frequently making the tale more elaborate with each retelling. Hence in later versions it is claimed that the witch was in fact the famous Yorkshire prophetess Mother Shipton.

However often these publications were printing up stories and songs that were already well-known. To draw a modern analogy, the then new medium of print was not unlike modern cinema, with publishers looking to adapt properties that were already popular, and hence well-loved tales and songs became books in the same way that modern Hollywood turns popular novels, comics and TV shows into (hopefully) blockbusting movies. Hence as it is very possible that this old legend was already well-known to the general public, we cannot say for certain how old the legend of the Rollright Stones actually is.

And British folklore has many more ancient stones that are said to dance too, although often their legends are less elaborate.  For example, the Nine Ladies of Stanton, near Bakewell are said to be the petrified forms of nine witches who were dancing on the Sabbath. And on nights of the full moon, they turn to human form once more and dance again, with a mysterious man in black, possibly the Devil himself, looking on. Like the Rollright Stones, there is a solitary megalith standing outside the circle, also called the King Stone, who legend claims was the fiddler for their revels.

In stories where folklore holds that standing stones were once living beings, it is perhaps not surprising that additional tales contend that at certain times, full moons, midnight or certain notable calendar days, the stones revert to their original forms and move about.  And naturally in many cases these tales obviously have an origin in the fact that it is not a huge leap of the imagination to see a ring of menhirs as crude statues of a circle of dancing folk, or an imposing menhir as a troll or witch turned to stone.

However while the human imagination's inclination to anthropomorphise any suggestive shapes may well account from many legends of ancient stones being petrified beings, other legends are less easy to rationalise. For example, there is another tale of the Rollright Stones, and this one claims that in the dead of night, the King's Men slip off down the hill to drink from a spring in a spinney near Long Compton, with the King Stone alway waiting until it hears the chimes of midnight before lumbering off to whet its whistle.

Now it would be easy to assume that this bonus legend is just a piece of whimsy that has attached itself to the existing lore. But in fact the Rollright Stones are not alone in exhibiting this most unusual behaviour, and next time we shall round up a legion of other stones that appear to have something of a thirst! 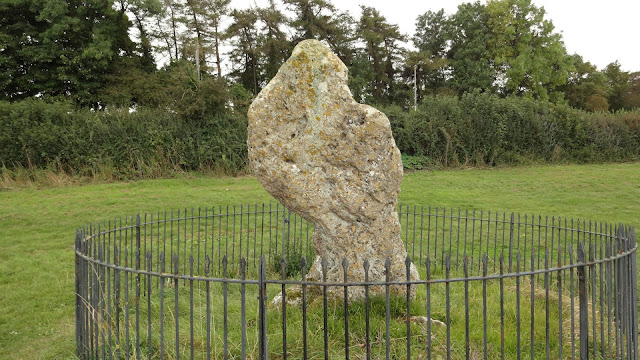 The stone pictured above is going nowhere, at least.
ST.CLAIRE