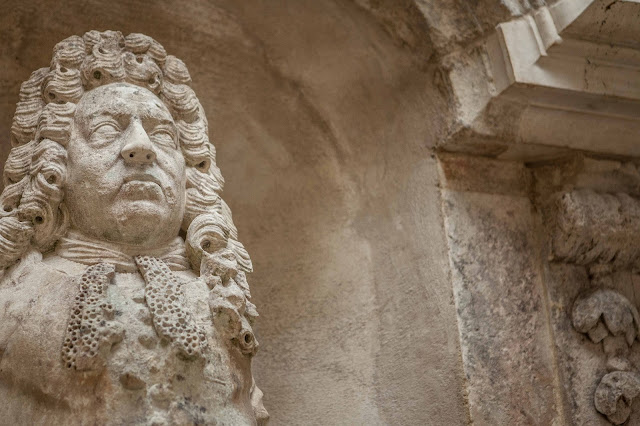 Over the last few weeks we've been excavating the folklore and legends linked to William Mackenzie's tomb on Rodney Street, a striking monument often referred to as the Great Pyramid of Liverpool. We have discovered that tales that Mackenzie was buried inside, seated at a table, to cheat the Devil of his soul, and how his cloaked spirit stalks the area, appear to be very recent additions to Liverpool's ghostly lore. And last week we learned these tales may well have their inspiration in a ghost story, The Tractate Middoth, penned by the great MR James, who in turn may well have been inspired by folklore surrounding other real life weird burials.

Last week we learned how possibly James had been inspired by tales of the burial of "Mad" Jack Fuller. However while it is often claimed that this Georgian eccentric was buried in a pyramidal moment and seated at a table in full evening dress with a roast dinner before him, similar to Mackenzie and James' Dr Rant, there doesn't appear to be any talk of his ghost walking the area or any other tales of anything sinister of spooky. So then perhaps we should look elsewhere. And certainly there are other possible sources of inspiration, for there appears to have been a fad for unusual burials from the 18th century onwards. 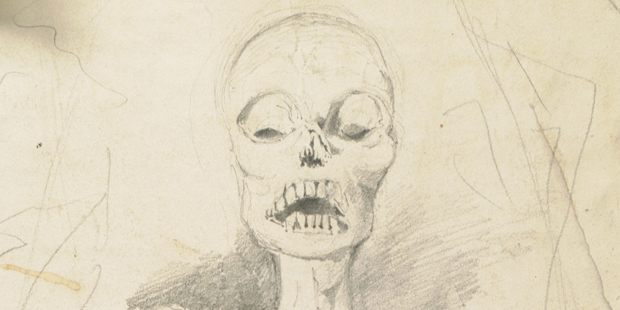 The remains of John Baskerville sketeched by Thomas Underwood

Many versions of the William Mackenzie legend state that he was a vehement atheist and gambler, which is how he ended up playing cards with a sinister stranger and wagering his soul away. And while there appears to be very little evidence at all in his diaries and contemporary writings that Mackenzie was either an atheist or given to gambling, there were other strange interments and odd funeral arrangements in the final wishes of various radical thinkers and rebels. For example, Birmingham printer John Baskerville, who invented the Baskerville font we still use today, was a staunch atheist, and in particular was opposed to the notion of bodily resurrection on Judgement Day favoured by some branches of Christianity. And so, he instructed that he was to be buried, standing up, not "laid to rest", in his own garden. And indeed when he died in 1775, he was buried according to his wishes - at least until his house was demolished and Birmingham Library built on its ground. Then Baskerville's body was displayed to the public for some years, before finally being re-interred. However in Birmingham Library archives, there is a sketch of his body made by Thomas Underwood in 1829, and with it you can see a preserved piece of Baskerville's shroud, and it is said anyone who touches it will be cursed!

Closer to the tales we have been discussing is the philosopher Jeremy Bentham, who instructed that after his death in 1747, his mortal remains were to be preserved and displayed in a glass case. It is usually thought that Bentham hoped the transformation of his mortal remains into what he referred to as an Auto-Icon would break down some of the taboos around death, in particular the religious objections of the day to doctors performing autopsies and learning from dissecting human cadavers. Although others have proposed it was merely an eccentric act or vanity or some macabre joke on Bentham's part. Either way however it is alleged that Bentham's ghost has been seen many times strolling around the University College of London where the Auto-Icon is still on display. However Bentham's shade appears to a benign presence rather than the somewhat sinister spectre of Mackenize or the down-right terrifying Dr Rant. The Auto Icon of Jeremy Bentham

But there is one weird burial that does seem to fit very nicely both the dread phantom of The Tractate Middoth and the spooky tales of the Rodney Street Pyramid. Not far from St Mellion, Cornwall is Pentillie Castle, a country house built by Sir James Tillie in 1693. Also in its grounds, at a location he dubbed "Mount Ararat" , Sir James erected a folly, a three storey gothic tower. On his death in 1713, Sir James will instructed that his body should be interred inside the Mount Ararat tower. And what's more his mortal remains were to be fastened to his favourite chair, dressed in his finest clothes, and surrounded by his books, fine wines and his pipe to await the resurrection.

Whether these instructions were intended as a morbid mocking of religious beliefs, an act of bizarre piety, or merely an eccentric whim, no one is entirely sure. Possibly it was some mixture of all three, for a contemporary of Sir James, William Hals reports that his will was "atheistic in principle" but also demonstrated "an utmost submission to the will of Divine Providence". Whatever the truth of the matter however, it was not long before accounts of his eccentric burial were being embroidered. A few decades later it was being claimed that he had also instructed his servants to bring his seated body fresh wine and food every week, which the poor souls continued to do for some two years before the decayed state of the corpse made the job impossible. In these elaborate stories, it was claimed that Sir James, a self-made man, had such a high opinion of himself and his admittedly impressive rise to riches, that he believed that death could not hold him and he would resurrect himself - hence the servants bringing him fresh food every week. Furthermore over the years, Sir James often was painted as "a celebrated atheist of the last age" (William Gilpin in Some Observations on the Western Parts of England 1798) and it was said that the restless shade of this impious fellow now stalked the night, and locals avoided the folly-turned-mausoleum after dark for fear of meeting his ghost. 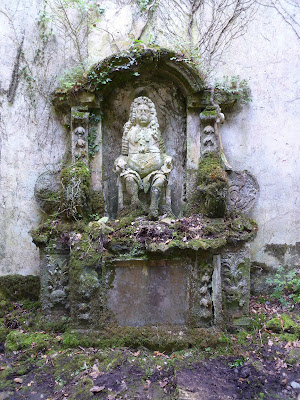 Statue of Sir James Tillie at the Mount Ararat folly

Sir James Tillie's burial proved to be something of a bone of contention among antiquaries and historians in the 19th century, for the folly clearly held no body, only a statue. Some argued that the corpse had been removed and buried properly in a local church, while others held that he had been interred beneath the folly itself. The argument would continue into the last century and were only finally resolved in 2013 when renovation work uncovered a sealed vault beneath the folly containing an ancient skeleton and leather-covered pieces of wood, thought to be the remains of a chair.

Given that Sir James' strange post mortem affairs have been so widely discussed over the years, earning a mention in many different tomes and journals, it is hard to see how as an antiquarian such as MR James would not have been familiar with the tale. And certainly the lore and legends do seem a good match for old Dr Rant. However there are clear parallels with the tales told of William Mackenzie's monument too, and indeed with the shared concept of a blasphemous burial there is arguably a closer correlation with the Mackenzie stories than with The Tractate Middoth.  And so, it might be the case that the stories that have grown up in recent years about the pyramid tomb of Liverpool were perhaps directly inspired by the legend of Sir James Tillie.

However the talk of losing a hand of cards with the Devil does remind me of another old well-known legend... More on that next time! 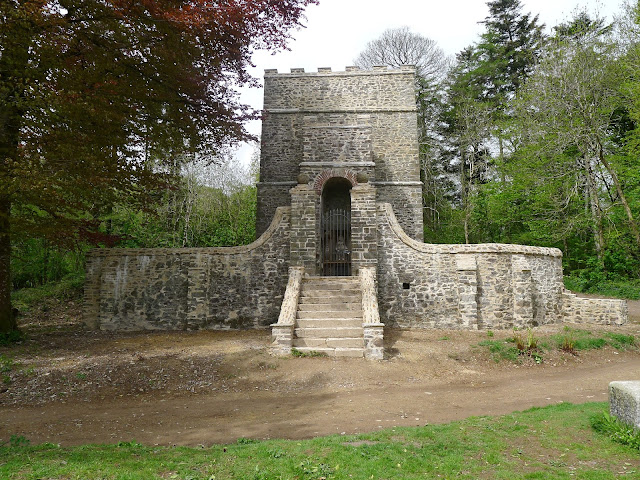