FOLKLORE ON FRIDAY - Monkey Business on the Union Canal 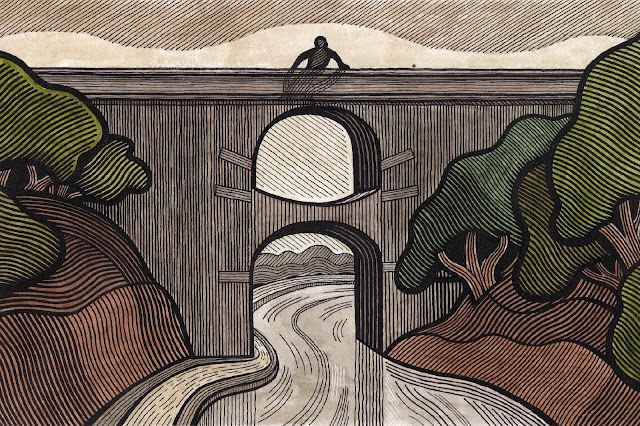 Folklore abounds with tales of curious creatures and strange beings, however in most instances for all their weirdness, these odd apparitions usually do have the common courtesy to fit into existing archetypal patterns. Hence woodland imps slot into local faerie lore, scaly beasts and loathy worms loll comfortably under the dragon umbrella, and folks in silver suits accompanied by coloured lights may safely be assumed to have wandered out of a UFO parked nearby.

However there are many oddities encountered in the realm of strange tales, which leave the folklorist perplexed as to where to file them. One such baffling tale was recorded in the book published in 1883, Shropshire Folklore: A Sheaf of Gleanings by Charlotte S. Burne and Georgina F. Jackson, and this tome they relate the following curious events -

On the 21st of January 1879, a labouring man was employed to take a cart of luggage from Ranton in Staffordshire to Woodcock, beyond Newport in Shropshire, for the ease of a party of visitors who were going from one house to another. He was late in coming back; his horse was tired, and could only crawl along at a foot’s pace, so that it was ten o’clock at night when he arrived at the place where the highroad crosses the Birmingham and Liverpool canal. Just before he reached the canal bridge, a strange black creature with great white eyes sprang out of the plantation by the roadside and alighted on his horse’s back. He tried to push it off with his whip, but to his horror the whip went through the thing, and he dropped it on the ground in fright. The poor, tired horse broke into a canter, and rushed onwards at full speed with the ghost still clinging to its back. How the creature at length vanished, the man hardly knew. He told his tale in the village of Woodseaves, a mile further on, and so effectively frightened the hearers that one man actually stayed with friends there all night, rather than cross the terrible bridge which lay between him and his home.

A very strange tale no doubt! The case of the Man-Monkey has been the source of much speculation over the years. A possible explanation was uncovered recently by writer and researcher Mike Dash who happened upon another odd tale that might shed some light on the matter. In an edition of  Sheldrake’s Aldershot & Sandhurst Military Gazette dated 8th December 1878 - note a mere six weeks before the report in recounted above - the following story was related -

For a fortnight past the district around Madely Wood, Salop, has been in a state of intense excitement, by the alleged depredations committed by a gorilla, which is said to have escaped from a wild beast menagerie travelling to Bridgnorth. The animal was stated to have first made his appearance in the neighbourhood of that town, where in the darkness of the night it was severally seen by a clergyman and a policeman, both of whom fled. It is also said to have appeared at several places in the immediate neighbourhood. A few evenings since the occupier of a house in Madely Wood went to bed at a reasonable hour, with the greater portion of his family, leaving his “gude wife” up, who took the opportunity to visit a neighbour, leaving the door open and a candle burning. Returning in a short time, she was horrified at seeing a bent form, with a goodly array of gray hair around its face, crouching over the expiring embers of the fire, apparently warming itself, the light having gone out. Too frightened to shriek, she ran to her neighbours, who quickly armed themselves with pokers, iron bars, guns, and pitchforks and other instruments of a similar character, and marched in a body to capture the gorilla. The form was seen sitting at the fire, but evidently aroused by the approaching body, rose to its full height and revealed the figure of an eccentric character well known in the neighbourhood as “Old Johnny,” who seeing the door open had quietly walked in to light his pipe, accidentally “puffed” the candle out, and was very near being captured, if not exterminated, in mistake for an escaped gorilla. The animal has not been heard of since.

Now having checked some maps, it is perfectly possible that a wandering gorilla may have covered that distance in six weeks or so, with the two locations being only roughly 15 miles apart as the crow flies. That is of course, if there had been an escaped gorilla in the first place. 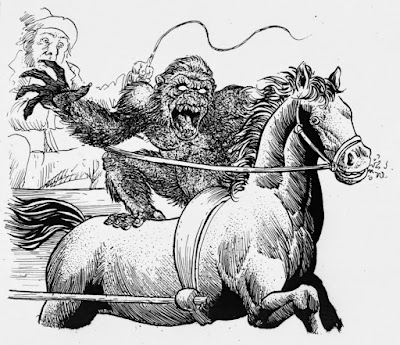 We should also note that if it was a gorilla, it has been a very long-lived one, for the Man-Monkey has been sighted around Bridge 39 of the canal many times since, over the years. And fairly recently too! For example, in 2002 Canal & River Trust (formerly British Waterways) appealed for reports and stories of ghosts on canals, and one respondent related the following encounter on the Shropshire Union Canal -

He told us that during a boating holiday on the 'Shroppie' in the 1980s he took the tiller while the family were inside the boat preparing lunch. Passing under a bridge he looked up to see what he described as "a huge black, hairy monkey" staring down at him.

Interestingly this gentleman was unaware of the local tales of the Man-Monkey, and was reportedly quite relieved to discover that he wasn't the only person to have seen a strange simian apparition in that area.

However to return to the original source, folks at the time had their own theories that seem to fit the tales better. For the account in Shropshire Folklore goes on to relate that a few days after the fellow's encounter on the bridge, a policeman came to call having heard that a man had been accosted and robbed. The erstwhile officer of the law was quickly put right and assured that no robbery had taken place, just the encounter with the strange phantom beast.

"Oh, was that all, sir" said the disappointed policeman. "Oh, I know what that was. That was the Man-Monkey, sir, as does come again at that bridge ever since the man was drowned in the Cut!"

And this is interesting for several reasons - firstly it suggests that the Man-Monkey had been seen prior to the quoted tale, which casts more doubt on the gorilla theory. But secondly, and more interesting from a folklore point of view, is the idea that this weird beast was actually the ghost of a man who drowned on that particular stretch of the canal. And on this second point, Mr Nick Redfern who has written a whole book delving into the mystery (a look here) uncovered an interesting theory proposed by Charlotte S. Burne herself -

I believe this to have originated in the classical and medieval notion of werewolves, living men who could assume the shape of a wolf at pleasure. Sometimes also a corpse would arise from its grave in the form of a wolf, and might do incalculable damage if it were not at once beheaded and cast into the nearest stream. This is a Prussian fancy, and the English King John too is said to have gone about as a werewolf after his death. Wolves have been extinct in England long enough to have disappeared from popular tales though not so many centuries as most people suppose, but the Man-Monkey seems very like the old fable in a new guise

Now while this writer feels the werewolf connection is perhaps somewhat tenuous, Burne does hit the nail on the head in the last line - that the Man-Monkey is a new form of older legends.


And while it might seem bizarre to us that a malevolent spirit might reappear as a monstrous monkey, it would have not have been strange at all a few centuries earlier. For in medieval ghost stories, we often find that spirits of the dead have the power to appear in strange and unusual shapes. In her essay Ghosts in Medieval Yorkshire, Jacqueline Simpson lists many examples of shape-shifting spectres, who not only appear as assorted animals, both natural and monstrous, but even transform into surreal forms such as "a whirling heap of hay with a light in the middle of it".

And stories of spectres appearing in assorted forms persisted well into the 19th century, and even find their way into fiction. As Simpson notes Charlotte Bronte's classic novel reference the old Yorkshire folklore concerning a ghost hound called Gytrash which appears "in the form of horse, mule or large dog". Furthermore the great MR James, who was definitely very familiar with all the old medieval tales of ghosts and spooks, incorporated this sinister shape-shifting after death in several of this famous tales. For example, In The Haunted Dolls' House a murdered old man rises from the grave to seek a terrible revenge in a form that "might be described as a frog – the size of a man – but it had scanty white hair about its head". And perhaps closer to the Man-Monkey, the spectre in The Diary of Mr Poynter appears as a human-like shape completely covered in thick hair. 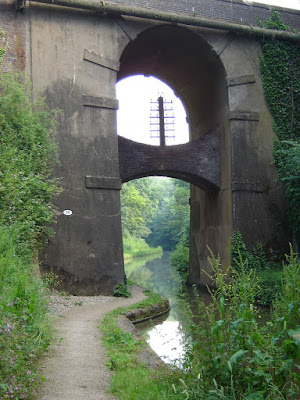 The stretch of the Shropshire Union canal where the Man-Monkey haunts dates back to the 1770s, and one can't help wondering just how old the tale of the drowned man the policeman related actually was. Quite possibly it had been doing rounds for a century or more. But certainly the account we have in Shropshire Folklore shows that the idea that the dead could return in monstrous animal forms was still circulating toward the end of the 19th century.

Now all of this might seem strange to us, for we have definite ideas about how ghosts should be portrayed - usually all ethereal and transparent, often floating in slo-mo and a tad decayed. But the popular image of the returned dead was somewhat different in other eras. For stories, whether folklore or fiction, reflect the prevailing ideas of the society that spawn them. If the Man-Monkey had manifested a few hundred years earlier, we would be more than likely be discussing some species of ape-like hobgoblin, while if the strange events had occurred in more recent times, we may well be looking at a tale of a British Bigfoot or perhaps a furry alien.

An Interesting Post Scriptum - in his seminal tale of a murderous mummy on the loose in Cambridge, Lot No. 249, Sir Arthur Conan Doyle has sightings of the resurrected Egyptian interpreted as an escaped monkey or ape of some kind. Given that this tale appeared in 1892, one wonders if Sir Arthur had heard of the escaped gorilla of Madeley or the monkey business on the Union Canal... 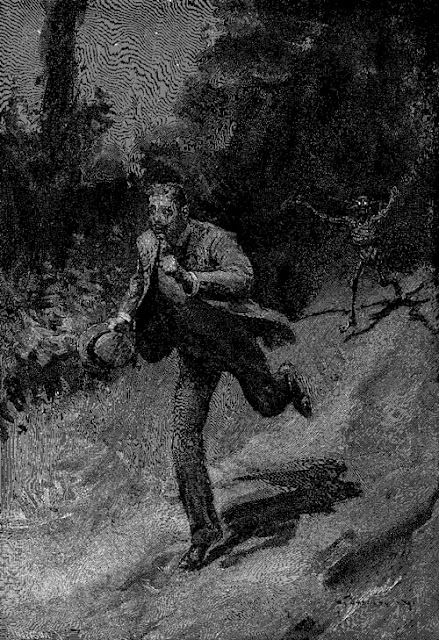