Welcome once again to another thrill-packed installment of Tomb of the Trumps... OK, maybe not trill-packed... But hopefully moderately entertaining! Anyhow, enough of my yakkin', let's boogie! So first off the deck we have this fella... 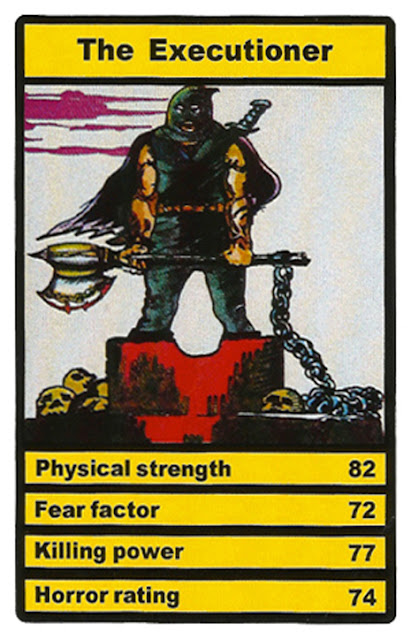 Now you might think that this is just some generic dude with an axe, the kind of guy you always used find hanging out on metal album covers circa 1985. However, note the odd squatness of his figure... Yes, I know, it's like watching telly at the house of an elderly relative who hasn't worked out what the 'Change Aspect Ratio' button on the remote does, and hence everyone looks squashed as if they came from a high gravity planet!

However to this seasoned Horror Top Trumpologist, this card doesn't say "Hey a medieval dude from Jupiter" - rather it suggests some one had to flatten their tracing in order to make it fit the card format! So where is this sinister headsman from then? Pinched from a comic? A rip-off of a great fantasy artist? Well, in this case it's both! For the original image is a painting by the legendary Frank Frazetta, which is called simply 'Executioner' and here it is - 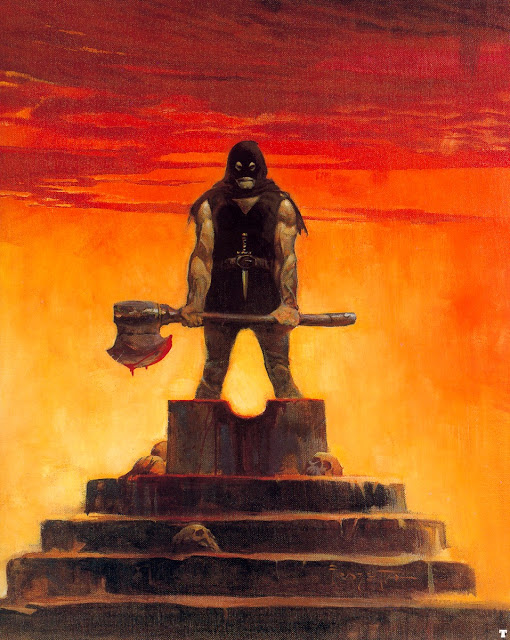 It was one of a number of paintings Frazetta did for magazine covers, in particular for Warren Publishing, who in the mid 1960s had successfully resurrected horror comics. The Comics Code introduced a decade earlier had effectively outlawed tales of monsters and murder, but the ghouls at Warren spotted a loophole and published their tales of terror in black and white and in a monthly magazine, effectively in a format that the Comics Code Authority didn't define as a comic. But as the likes of Creepy, Eerie and Vampirella only had monochrome art for the strips inside, Warren had a policy of adorning their mags with glorious fully painted covers, and that's where the likes of Franzetta came in.

Interesting last titbit of horror comics history - this was actually the last cover Franzetta painted for Warren, appearing on the cover of Creepy #17 in October 1967. Apparently by this point low rates of pay and a lack of artistic freedom led the legendary artist to move to pastures fresh...

...And move on so must we! Here's our next card, the charmingly titled Freak! 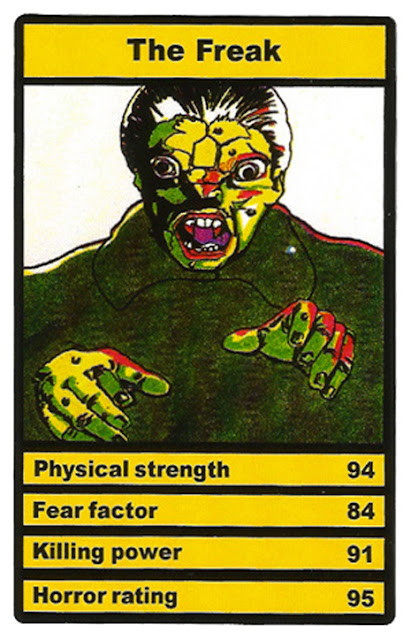 Now I'm sure the source for this trump needs no introduction to fans of classic horror movies, for this is a creature from the legendary house of Hammer, the titular beast from The Reptile (1966).

Hammer of course had made their breakthrough with a creepy adaptation of Nigel Kneale's The Quatermass Experiment, and had built the foundations of their house of horrors with new versions of Dracula, Frankenstein and The Mummy. However by the 1960s the studio was keen to create its own original terrors and The Reptile was an early and very successful step in that direction. The movie tells the tale of a remote Cornish villager with a highly unusual secret - it is the lair of a... well, what can we call the Reptile? A were-snake? Snake-person?

But whatever you call it, the titular terror looked great, whether in fully monstrous mode with a make-up created by Roy Ashton or in her human guise as Anna Franklyn, played by cult leading lady Jacqueline Pearce, who is probably best known by genre fans for her later portrayal of sexy space tyrant Servalan in Blakes' 7. 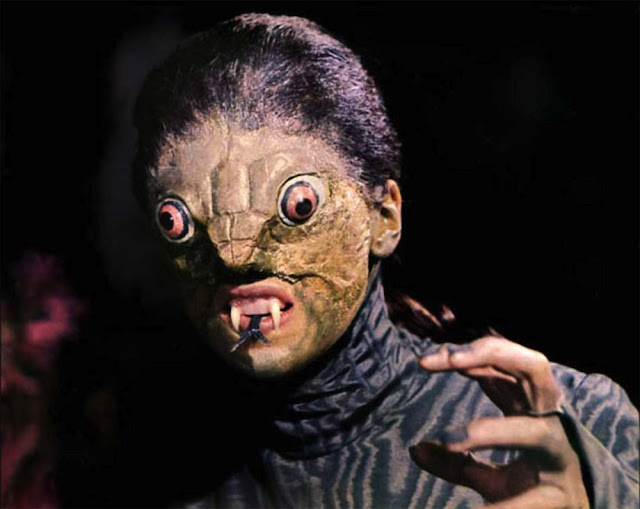 However as is often the case with these cards, there's actually a secondary source here. I often wondered why the artist had given the Reptile what appeared to be a black coat with a big collar, and comparing various stills from the movie I soon realised why - these are the Reptile's mitts at all! In fact, that's not her body either!

Yes, this is another hybrid picture, created in the mad lab of the Unknown Artist's deranged imagination from two separate images. Oh yes, the head is Jacqueline Pearce adorned with that iconic monster make-up, but the body is stolen from an old horror magazine... 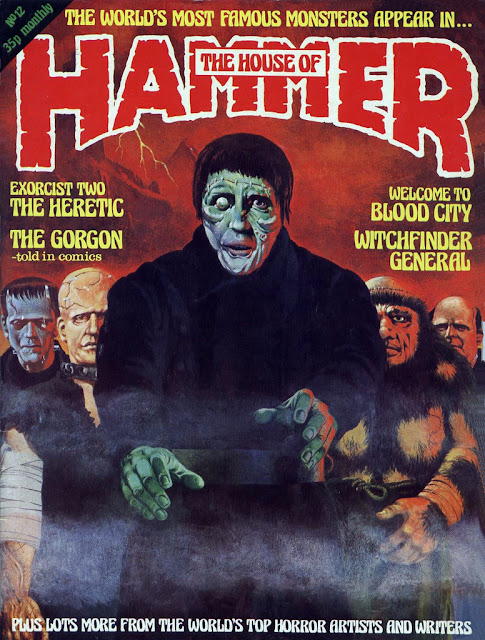 As you can see, the body and hands actually belong to another Hammer star, Sir Christopher Lee, in his break-out performance as the creature in Curse of Frankenstein, as seen here on the cover of the fondly remembered House of Hammer! Jacqueline Pearce's head on Chris Lee's body - now that truly is a Frankensteinean creation!