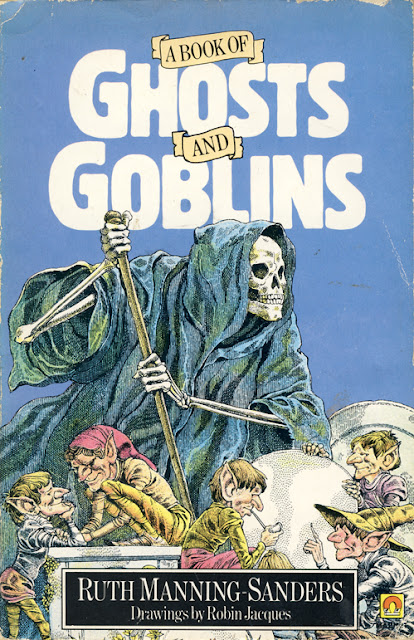 One of the things that always fascinates me is the lore of the playground - all those stories, rumours, crazes and fads that spring up in your schooldays. As we grow up we tend to forget that the world of the child is a somewhat different one, one where kids, whether at school or in the local neighbourhood, band together and form their own little communities. And unlike the world of the grown-ups, these communities are united by an oral tradition, whereby certain toys will be canonized as the coolest ever, other items deemed must-have fashion accessories or secret club symbols, and local knowledge, such as how the dog that lives at the house on the corner once bit some kid's toes off or such and such a house is haunted, is passed down through generations of children.

And today's book came to my attention through being part of local playground lore. Now in our junior school, much like yours I'm guessing, as well as the school library, every classroom had its own mini library too. And naturally the lore of playground had something to say about their contents - a class room that had its own copies of perennial childhood favorites such as The Cat in the Hat or Tintin: Destination Moon were obviously to be envied, and naturally there was an informal waiting list to get your turn to take such a book out on loan. However my second year classroom contained a tome that was spoke of in whispers, for this was a collection of ghostly tales and therefore was not only cool to get your grubby little mitts on but it was also a badge of courage to be able to say you had read it!

Obviously as a kid already mad keen on all things spectral and monstrous, I was desperate to get this highly coveted volume out of the class library. And as I'm sure many of have guessed, when I did at last get to borrow the book, I discovered that, like much playground lore, the claims about it had been somewhat exaggerated - sadly this book turned out not to be the promised bottomless well of nightmare-fuel. Rather than spine-chilling ghost stories or ghastly horror tales, instead here we had a collection of folk tales, fairy stories and old legends from around the world that had supernatural themes or elements. And while a couple of the stories had some spooky moments, on the whole they were somewhat less than terrifying, and certainly not the kind of tales that would, as the playground lore alleged, keep you awake for weeks...

To begin with, these stories were far removed from my immediate world - the tales here were safely tucked away in what I thought of as olden times and therefore I was fairly sure I was unlikely to encounter any of their terrors in my local area. On this matter I was very much in agreement with the great MR James who observed in his essay Ghosts- Treat Them Gently! that "the more remote in time the ghost the harder it is to make him effective". Secondly the assorted spooks and spectres often had a reason or a purpose, seeking to right a wrong for example, making then familiar and relatable rather mysterious and terrible. And thirdly, the cosy rounded nature of folk and fairy tales demanded that these assorted walkers in the night were to be comfortably laid to rest or defeated by the heroes and heroines of the tales. 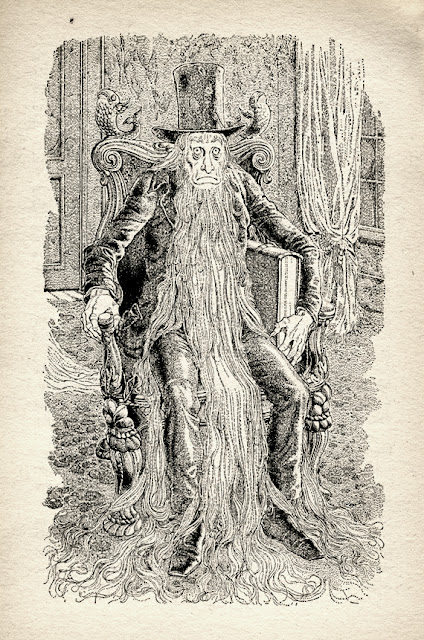 However despite not robbing me of sleep nor turning my hair white, I did thoroughly enjoy this little book. And while the stories might not have been blood chilling they were certainly entertaining and delightful. Ruth Manning-Saunders perfectly captured the tones of an old storyteller, spinning out tales packed with charm, character and imagination. Unlike many other writers who have retold old folk tales and legend, her prose was always colourful but never cute, traditional but never twee, and while she was clearly writing for a young audience her stories never talked down to their audience.

Complimenting the stories beautifully were the illustrations by Robin Jacques. Possessing a distinct style all of his own, his art was highly detailed and simply gorgeous, and he could turn his hand to anything a tale required, being just as comfortable drawing noble princesses as he was skeletal horrors. I freely admit it spent many many hours in childhood - and in adulthood too - trying to master the kind of intricate shading and textures of his artwork.

Indeed I was to spend a great many happy hours in the company of Manning-Sanders and Jacques, for I discovered that this volume was but one in a long running series. And so after having been delighted with the stories and art in this volume, I was soon hunting down its brethren, further retellings of folk and fairy tales from around the world, collected into themed collections. Naturally being the kind of child I was, A Book of Monsters, A Book of Dragons and A Book of Giants were high on my list to find and read. However I soon discovered there was plenty of monstrous and magical action in any book from Jacques and Manning-Sanders. And having read many volumes borrowed from local libraries, I'm still hunting downing editions of these enchanting books to this very day. 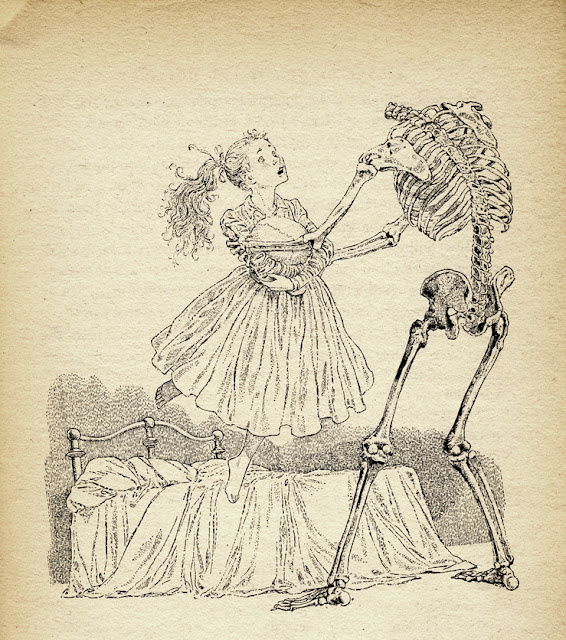 I had this book when I was a child and my nan would read from it. Where can I get a copy please

There are secondhand copies on the likes of Amazon and Abesbooks - but be warned the hardback editions can be a be pricey!