GREAT GHOSTS OF THE SHELVES #5 - The Undead ed. James Dickie 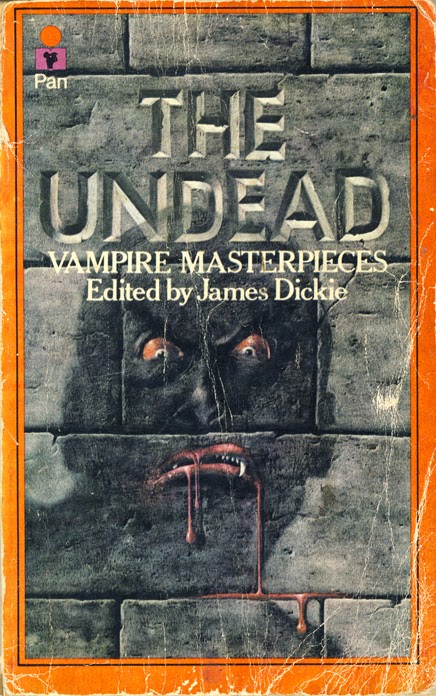 Back in the day before the internet, secondhand bookshops were rare and wonderful things. In those days, to get hold of out of print titles, the only way to find them was scouring every secondhand book shop in your local area and hoping the titles you were hunting would appear. Therefore when a new secondhand book operation opened for business, it was instantly added to every bibliophile's flightpath.

Therefore as a young book lover with limited transport and even more limited pocket money, it was a huge delight when the local post office round the corner suddenly gained a secondhand book section alongside its other side lines of stationary, knitting supplies and assorted ornamental tat. The used book corner didn't last long, but for the year or two it was there it proved to be a real treasure trove. And one of the first tomes I picked from there - for the bargain price of 20p - was this somewhat battered paperback anthology of vampire tales.

Now I know what you are thinking... What no Carmilla? No Berenice? No Horla? How can this be vampire classics Mr Dickie! Well, as our genial editor explains in the lavish and informative introduction he chose to leave out several well known tales to avoid over-lapping with another volume. the publisher of this tome, Neville Spearman/Pan, had issued another undead anthology The Vampire curated by Roger Vadim in 1963, and hence for this 1971 collection Mr Dicky courteously avoided any overlap with the preceding volume. It was a gentlemanly and ultimate canny move, for Vadim's The Vampire promptly went on my To Buy list and we shall look at that volume another day!

However as you will see, despite Vadim have the first pick of the crop, nevertheless Mr Dickie has assembled a rather fine selection of tales here for some of the true masters of weird fiction  -

The Undead (verse) by Richard Wilbur
Dracula's Guest by Bram Stoker
For The Blood Is The Life by F. Marion Crawford
The End Of The Story by Clark Ashton Smith
The Death Of Ilalotha by Clark Ashton Smith
The Tomb Of Sarah by F. G. Loring
Revelations In Black by Carl Jacobi
The Room In The Tower by E. F. Benson
The Death Of Halpin Frayser by Ambrose Bierce
A True Story Of A Vampire by Eric, Count Stenbock
The Hound - H. P. Lovecraft
When It Was Moonlight - Manly Wade Wellman
The Canal by Everil Worrell
The Old Man's Story by Walter Starkie

The Undead is a highly entertaining collection of vampire tales, delivering a fine roster of literary bloodsuckers, and giving me my first taste of Lovecraft, Bierce and Clark Ashton Smith into the bargain. And while Vadim might have bagged some of the heavy hitters, in the long run I feel Dickie's tome has come out the winner. For in not overlapping with the earlier collection, this book also has managed to avoid overlapping with countless later volumes of vampire tales too while still delivering plenty of classics - which makes it an essential tome to track down for any fan of vampire lore!

For me the Jacobi story and the Wilbur poem were the highlights!

It's oddly similar the cover of another anthology of vampiric fiction which I'll be covering in the next couple of weeks ;)