FOLKLORE ON FRIDAY - Live at the Witch Trials! Part II 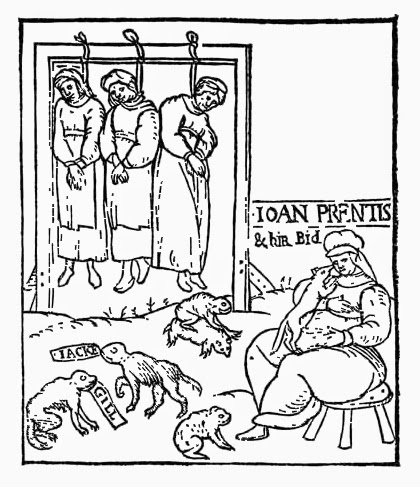 Last week we delved into the world of the early popular press, the world of the ha'penny one sheet broadside, and found a late 16th century ballad telling of three witches tried in Chelmsford.  Now the street ballads of the 16th and 17th centuries, while often drawing inspiration from current events, aren't exactly known for their historical accuracy; indeed a good deal of sensationalist embellishment was part and parcel of penning a popular ballad. So then was there any truth to the tale laid out in A New Ballad of the Life and Death of Three Witches Arrayned and Executed at Chelmsford 5 July 1589?

Well fortunately for us, another branch of the popular press of the day can provide us with a good deal more detail. From the late 1400s onward the publication of essays, tracts, stories, songs and poems as quarto sized booklets formed by folding printed pages together became exceeding popular - they cost little to print, were fast to produce, and were sold cheap. Their short and inexpensive nature proved to be very popular with the public, and this ensured that a writer could reach a very wide audience very swiftly. While political and religious pamphlets would start to dominate the market in the late 16th and early 17th centuries as England lurched towards the Civil War, much like the one sheet broadsides and ballads accounts of trials, preferably involving murder and mayhem, were highly popular. Therefore when a craze of witch-hunting swept through the country, the pamphleteers had ringside seats at the trials, ready to pass on all the lurid details of deviltry and black magic to an eager public.

Hence we have a lavish account of the case in the form of a pamphlet entitled The Apprehension and confession of three notorious Witches. Arreigned and by Justice condemned and executed at Chelmes-forde, in the Countye of Essex, the 5. day of Julye, last past. 1589. Yes, while these little booklets were very short, they hadn't yet mastered the art of punchy titles. However thanks to high amount of detail in this pamphlet, historians have been able to verify that this trial took place as described from the records of the local court of Assizes. The Assizes were Crown appointed courts that were held quarterly across England with the country divided into six circuits. At this time Essex was part of the Home Circuit which also covered Hertfordshire, Kent, Surrey and Sussex and were held in Chelmford. Hence what we have detailed in this pamphlet is not one witch trial but three separate ones, featuring three separate charges of suspected witchcraft being brought to the court from over the previous quarter. Somewhat oddly however all three witches were named Joan.

After a stern warning about the perils of witchcraft and shielding those who go against God in this fashion, we have the first case brought against one Joan Cunny of Stysted, Essex, tried by Anthony Mildemay on the 31st March 1589. The case opened with her confession, in which this widow claimed to have been taught how to raise the Devil by a Mother Humfrye of Maplested, who instructed her on how to draw a circle on the ground and intone certain words to raise "Sathan the cheefe of the Devills". She carried out this instructions in a field and "two Sprites did appear unto her within the said Circle, in the similitude and likenes of two black frogges". In return for her soul, these Sprites would do whatever she wished, and having struck the bargain, apparently Cunny was to command four of these black frogs for the next few years, each with its own name and powers - "Jack killed mankinde. Jyll killed womenkinde. Nicholas killed horses. Ned killed Cattell". These hell-frogs were kept in a box, fed upon milk and white bread, and often conversed with Mother Cunny. She soon set them to work such as destroying property (a local's stack of firewood) and causing harm and hurt to those around her. While she held that some folks she was unable to harm thanks to their faith and virtue, he admitted that "she hath hurt divers persons within this sixteene or twenty yeeres, but how many she now knoweth not". She also confessed that her daughter Margaret had sent out the sprites to harm villagers too.

Further evidence is presented by her own grandsons, the bastard children of her daughters, aged 10 and 12. The elder boy testified that on the way to Braintree market, a man named Harry Finch whose wife was then busy brewing, refused to give them any drink. For this Joan Cunny sent out the sprite Jyll to Finch's wife, who was "greevously taken in her head, and the next day in her side, and so continued in most horrible pain for the space of a week, and then dyed". The same lad testified that his grandmother had sent out another of her frogs to harm a boy who had stole firewood from him, and furthermore had instructed him to take the imp Jack to a field belonging to Sir Edward Huddlestone, the Sheriff of the Shire, where the sprite then raised a wind that brought down a mighty oak tree.

The pamphlet records that the judge wasted no time in sentencing her to death. However looking through the records of the Assizes, we can also discover the fate of Joan Cunny's daughters. For both were  brought before the same court on charges of witchcraft, with Margaret being found guilty of witchcraft and sentenced to a year in prison, and to be pilloried. Her sister Avice was also found guilty of murder by incantation, however she begged for mercy on the grounds that she was pregnant, and so was instead remanded in custody. It seems a little odd that the pamphlet writers did not make more of a whole family of witches, but knowing their audience's appetites we may guess that prison sentences did not warrant as much interest as an execution.

The next case recounted is somewhat shorter, but bears a number of similarities to its fellows. This was the testimony of one Joan Upney of Dagenham, who was brought before Sir Henry Gray Knight, on 3rd May 1589. Upney had been identified as a witch by two local men, John Harrolde and Richard Foster, and had attempted to flee justice. In her confession, she claimed that some seven or eight years previously.a witch from Barking named Fustian Kirtle or Whitecote, had given her "a thing like a Moule", and was instructed that the creature would harm anyone who she bade it to. Rather strangely, this creature seemingly worn out - "it consumed away" - but was replaced by another just like it, and a toad which she had for a great while, and had had many more toads too.

One toad she placed in the Harrolde house, and it was claimed the creature "pinched his wife and sucked her til she dyed". Another toad was unleashed on Richard Foster's wife, whom it "pinched" as well. Both of these familiar creatures did not return after their mission. Upney claimed she had two more toads in her home but they too had been "consumed away" when she fled her house. She too was sentenced to death, however the pamphlet claims she showed repentance for her sins and asked God for forgiveness before her execution. It also notes that she "cryed out saying: that she had greevously sinned, that the devill had deceived her" - and considering how her familiar sprites appeared to be one-shot deals and prone to wearing out, we might well conclude that the Devil indeed did deceive her - certainly at least she got a poorer deal than Joan Cunny, who had received a far better class of familiar!

However our third witch had the most interesting familiar of all, whose exploits we will examine in detail in the third part of Live At the Witch Trials! 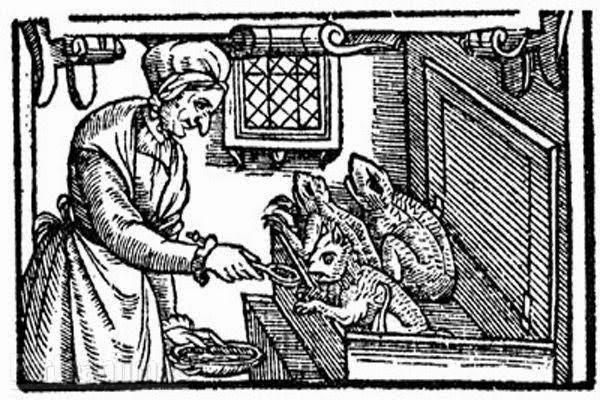