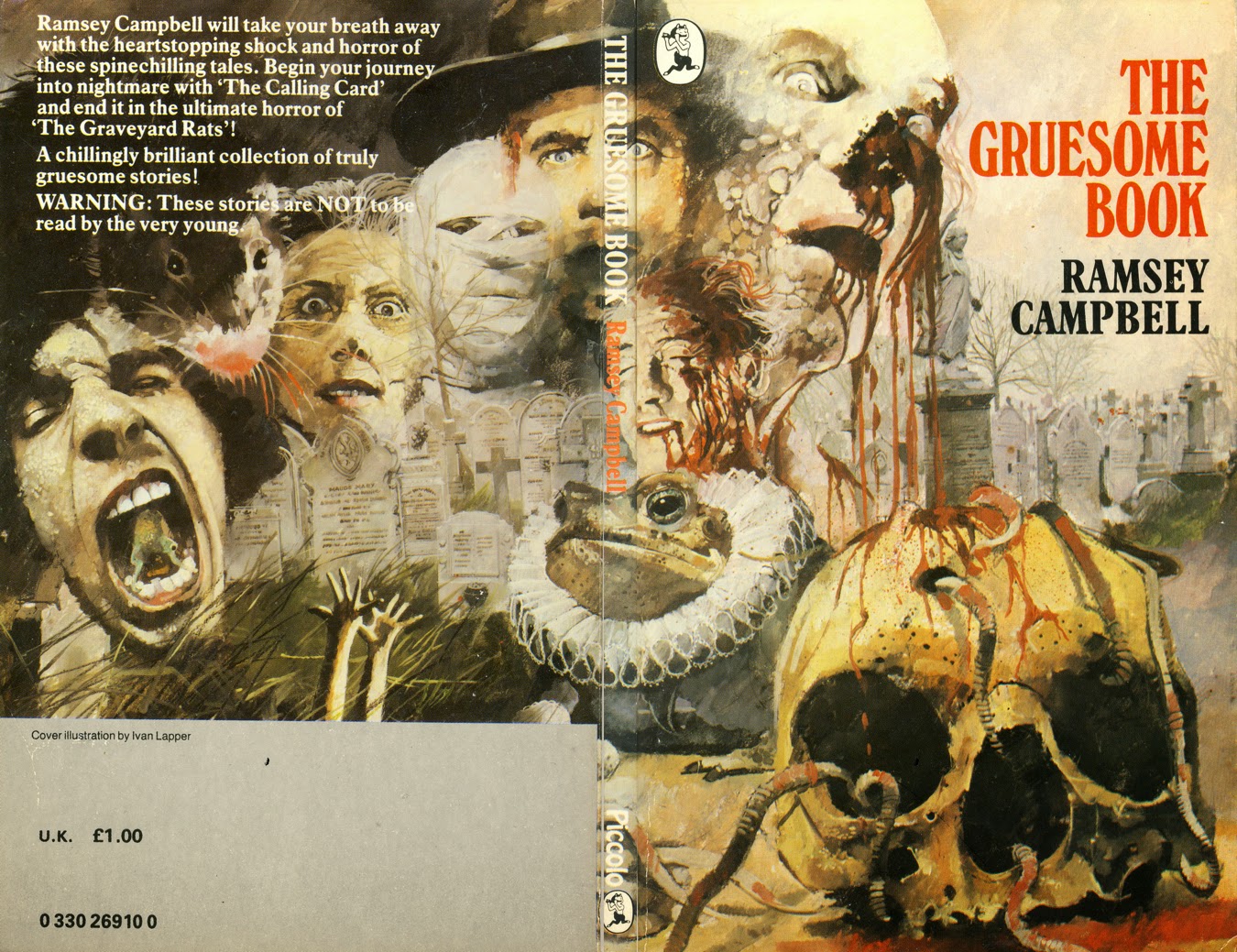 Ramsey Campbell is of course one of the modern masters of the weird tale, and even as far back as 1983 he was regarded as one of Britain's foremost horror writers. Of course a certain grubby twelve year old who picked up this book didn't know that, but he did know the name - as Mr Campbell had written some memorable short tales appearing in other anthologies, tomes edited by the late Michael Parry to be exact, but that's a story for another day...

Anyhow back to a grey February afternoon in the bookshop - it was just getting dark when the delightfully blood-spattered and worm-oozing skull caught my eye. Naturally as a young horror fanatic, back then my opinion was that the height of cover design was sticking a skull on it, preferably with plenty of blood and worms into the bargain, and hence The Gruesome Book immediately had my attention. And I was further delighted to see that cover artist Ivan Lapper had provided equally striking black and white illustrations for every tale too. Oh yes, this might be a slim kids book, but judging by the artwork both in and out, the gloves were well and truly off.

Even the introduction from Ramsey reads like almost a dare - in a brilliantly no-messing-about two paragraphs, our host first decries the shoddy selections of ghost stories he encountered as a child - "those books wouldn't have scared a neurotic three year old" - and then outlines his mission to provide an introduction to good adult horror fiction with stories that have scared him... and still scare him. Now to my young and foolish eyes that seemed like throwing down the gauntlet - and yes, Mr Campbell - CHALLENGE ACCEPTED! You have my pocket money sir! 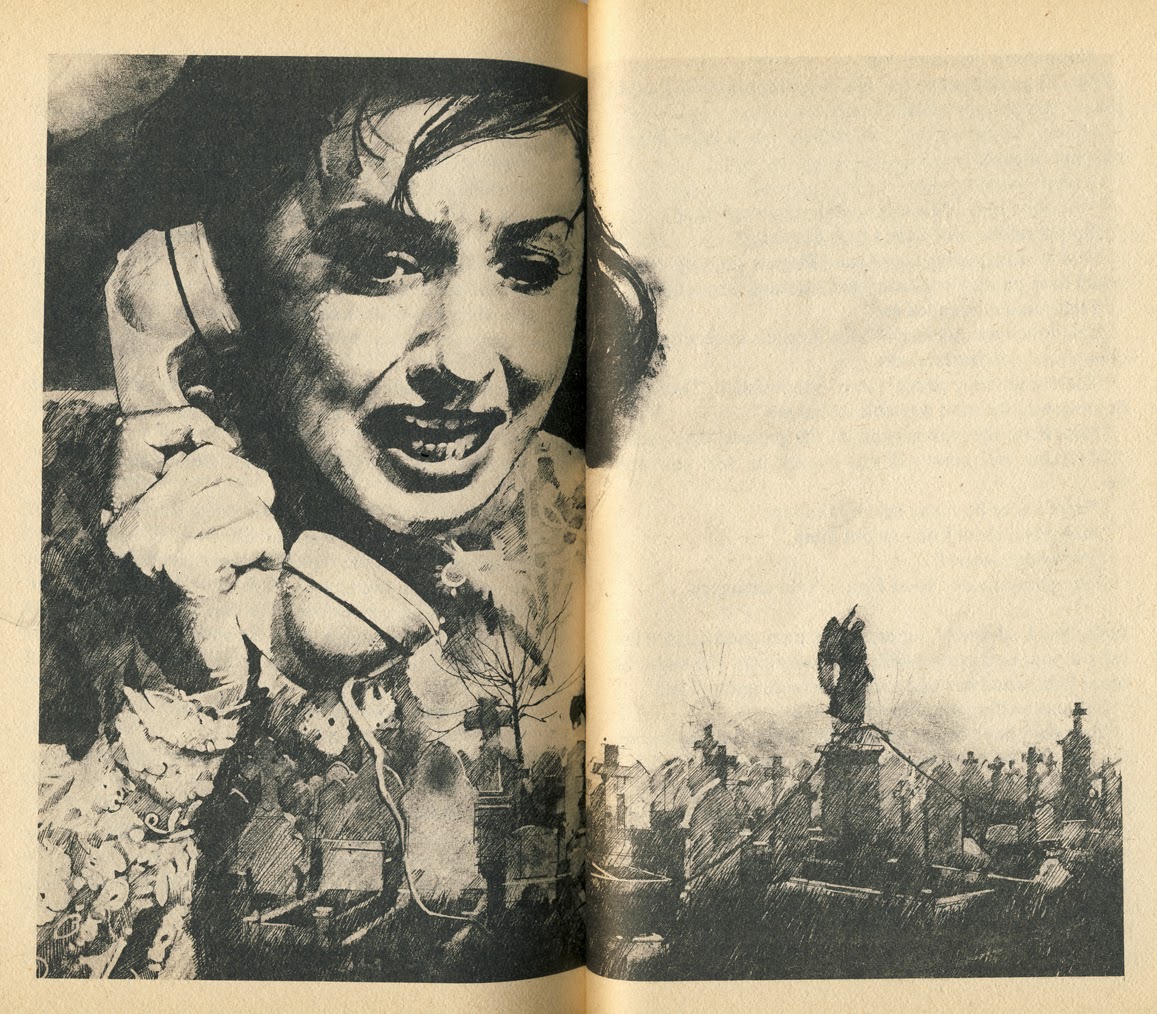 Actually in all honesty, he had already got my sale from the instant I glanced at the contents page. Nigel Kneale was already a legend in my mind thanks to seeing assorted Quatermass adventures, August Derleth had penned a favourite of mine in Deadly Nightshade, and it was already my policy to buy or borrow any books with tales by either Robert Bloch or Richard Matheson in them. The full contents are as follows -

Calling Card by Ramsey Campbell
The Pond by Nigel Kneale -
The Extra Passenger by August Derleth
Hobo by Robert Bloch
Bones by Donald A. Wollheim
The Deep-Sea Conch by Brian Lumley
Long Distance Call by Richard Matheson
The Graveyard Rats by Henry Kuttner
3:47 AM by David Langford

Needless to say the Bloch and Matheson tales were both up to scratch, Derleth's story very creepy, and Nigel Kneale's The Pond proved to be stunningly strange and macabre. Wollheim's Bones was a mummy tale with a big and gory difference, while 3.47 by David Langford was a truly horrible tale of a recurring nightmare that I'll bet spawned more than a few bad dreams. The Deep-Sea Conch was my first taste of Brian Lumley, and Calling Card (originally called First Foot, a title that is blackly hilarious if you've read the story) cemented in my mind that I really had to find a full book of Campbell tales.  However my favourite tale in this collection - though only by a whisker thanks to the stiff competition - is The Graveyard Rats - both wonderfully atmospheric and horrible, and as I would later discover a story that neatly ties into HP Lovecraft's Pickman's Model.

The Gruesome Book certainly lived up to its title, and indeed put many anthologies for grown-ups to shame. And it still stands up today as a very fine collection of horror tales, boasting perhaps one of the strongest line-ups of tales and top talents ever assembled, and hence well worth the trouble of tracking down. 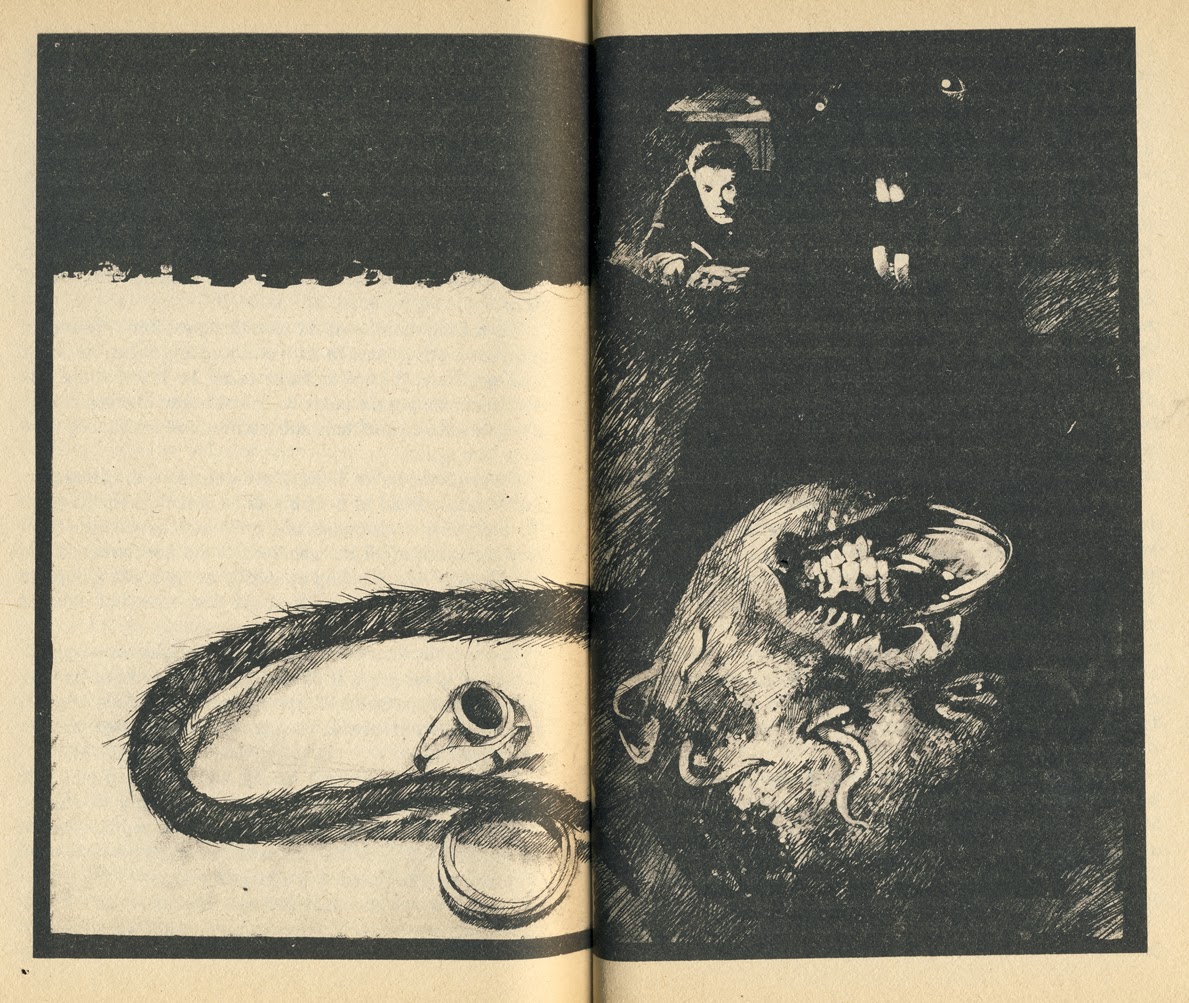 Ivan Lapper illustration for The Graveyard Rats by Henry Kuttner