FOLKLORE ON FRIDAY - Live at the Witch Trials! Part I

One of the main problems for any investigator of folklore is that while assorted sages and scholars did an excellent job in the 19th century of preserving whole swathes of legend and lore from oral and local traditions, as one ventures back in time through the 18th century and beyond, there is a good deal less being written down and recorded. By its very nature, folklore thrives on the lips of people rather than in the pages of  books; it is passed down in tales told by the fireside, passed around the ale house, or spun out at bedtime. And so, as we have often discovered in this series of wanders down the leafy lanes and shadowy byways of folklore, when searching out sources dating from before the 19th century we are often left hunting for tidbits that have slipped into proper history books, and references to folk beliefs turning up in poems and plays.

Fortunately however we do have somewhere else to turn other than the jottings of antiquarians and poets. For while books and literature were the preserve of the rich and hence a limited resource in centuries past, from the 16th century onwards there was a popular press, churning out a variety of publications designed to tempt the pennies out of the pockets of ordinary working folks. There were inexpensive chapbooks and pamphlets, but cheapest, and hence the most popular, were the broadsheets and broadsides. These were single page publications which provided a whole world of entertainment: some relayed the news of the day, other retold exciting stories, and many did both in the form of popular ballads. Produced regularly and widely circulated, essentially these broadsides were the equivalent of the rolling news, movie channels, and the pop charts all rolled into one. Therefore just as modern bars have widescreen TVs to tempt customers in, so too wily landlords in ages past ensured their pubs and taverns had the latest broadsheets pinned up to attract the punters.

Now admittedly these are perhaps not the most reliable of sources, for often fact and fiction were freely mixed up in the most sensational manner possible in order to sell as many copies as possible. Turning both popular stories and contemporary news into song form was highly popular, and these street ballads provided material that could be read for pleasure, recited as a poem or performed as music. Historically speaking they represent a fascinating time which sees the older oral traditions of storytelling, minstrelling and balladeering merging into what would become the modern newspapers, the book trade and the music business. Popular topics, whether fact or fiction, often would spawn many ballads on the same subject, while bestselling broadsides would be reprinted, re-illustrated, revised, expanded, and even pirated - proving that in the entertainment business, cover versions, sequels and remakes are not just a modern curse! 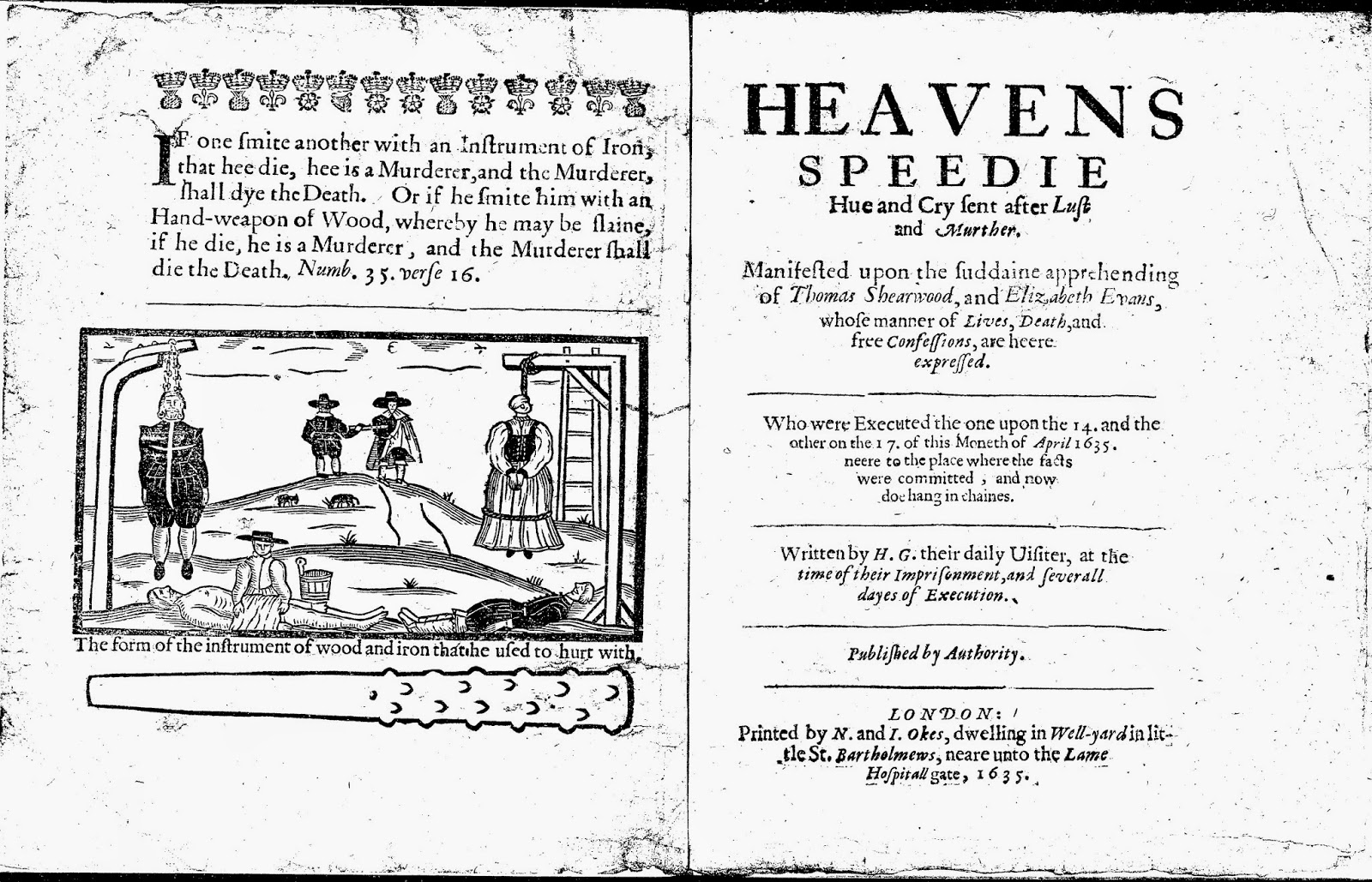 But nevertheless there is a wealth of interesting material to be discovered here. Given that the broadside printers soon learned that the public loved a sensational story, the archives of surviving broadsheets feature a good deal of interest to folklorists. As criminal trials and accounts of gruesome murders were particularly popular with the punters who ponied up a halfpennies for ballads, it is no surprise that several ballads focused on the numerous witch trials of the 16th and 17th centuries.

A New Ballad of the Life and Death of Three Witches Arrayned and Executed at Chelmsford 5 July 1589 was one of the earliest of these street ballads that detailed such a trial, which saw three women from Dagenham accused separately of witchcraft. Printed in London in 1589, a tattered copy eventually found its way into the hands of legendary editor Peter Haining, who restored the text and printed it in his excellent volume on the Essex witch trials The Witchcraft Papers (Robert Hale 1974) -

A New Ballad of the Life and Death of Three Witches
Arrayned and Executed at Chelmsford 5 July 1589
(To the tune of 'Bragandary Down', & etc)

IList Christians all unto my Song
'Twill move your Hearts to Grace,
That Dreadful Witchcraft hath been done,
Of late about this place;
But Three that cried the Devil's Name
With those who did them follow,
Now to Justice are brought home
To Swing upon our Gallow.

IIThere's scarse a Month within these Years
but Witchcraft foul is done,
And many are the weeping tears
These Satan's Fiends have rung;
Though they sought Mercy ere the rope
Soon as the Judgement's read,
Who gainsays the Devil's Hope
Is all when they are Dead?

IIIA vile long life they have run on
Regarding not their End,
Their hearts still bent to cruelty
Not minding to Amends;
Men and cattle they Bewitched
No Peace they gave the Rest,
But yet, in turn the parts were switched
By Marks upon their Breasts.

IVAs to the Story now to tell
The Truth I will Declare,
It was the Witches Children small
That they did not Beware;
For God into these Infants Hearts
Did pour the Light of Reason,
And all against their Mothers spoke
Of Witchcraft and of Treason.

VEvil were the tales of their demands
Sprung from the Depth of Hell,
And terrible the work of their Commands
As did the children tell;
Now the Judge the Sentence read
And ended in our town,
The rule of Imps and Spells and Dread
For many miles aroun'.

VISo listen Christians to my Song
The Hangman's swung his rope,
And on these Gallows hath been done
An end to Satan's Hope;
Give the News from Chelmsford Town
To all the world be spread,
A crew of Evil Witches have gone Down
Hang'd by the neck, all three are Dead
(Repeat)

As is typical of many ballads of the time, the case is recounted as a moral lesson while at the same time reveling the dark deeds of the story and details of the execution. But also, even allowing for a degree of sensationalism and poetic license, this ballad does tells us much about the times it was written in, reflecting very clearly both how common witch trials were and how widespread the fear of witchcraft was during this period. The second verse make specific reference to the regularity of reports of witchcraft, and its claim of the discovery of witchcraft being nearly a monthly event is no exaggeration for dramatic effect. For in the Essex area at this time, there were 670 men and women accused of witchcraft between the years of 1560 and 1675  (see here for the staggering full list).

Furthermore the text also assumes that its audience possessed a certain amount of foreknowledge and familiarity with the details of witchcraft. The mention of "Imps and Spells" is no idle poetic fancy, but an allusion to a common feature of many of the trials of the period, where it was claimed that the accused witches carried out their malice through the agency of a familiar spirit or creature which they sent abroad to do their will. Secondly the third verse mentions "Marks upon their breasts" referencing the common belief that witches had bodily signs of their allegiance to their master Satan, which were said to be either scars where the Devil had touched them, or wounds or malformations where they suckled their imps and familiars with their blood.

The text also makes clear that more generally witchcraft wasn't seen as an isolated crime, but part of the grand plan by the Devil himself to bring chaos into the world. Witchcraft was seen as a fifth column in society, a destabilizing force from an enemy power. In a worldview that held that the Earth was a battleground for the forces of Good and Evil, monarchs were believed to have been given a divine right to rule, and hence in many witchcraft trials the accused were being tried for treason as well as sorcery, for to practice black magic was not only to be against God but to be against the Crown too.  Hence the line here - "all against their mothers spoke of Witchcraft and of Treason".


Now as stated earlier, due the sensationalist nature of broadsides and the complete lack of journalistic ethics of their writers, aside from giving us a snapshot of contemporary attitudes and beliefs, is there any historical truth to the tale recounted in this ballad? Well, luckily for us, there are court records that verify that there was indeed such a trial and execution, and furthermore there was a similarly cheap and sensational pamphlet produced in the same era that gives us a more detailed account of the crimes and trial of the three witches of Chelmsford Town!

And the full shocking tale of witchery - featuring blood drinking, storm raising, frog assassins and killer talking ferrets! - will be examined in full next week in Part II of Live at the Witch Trials! 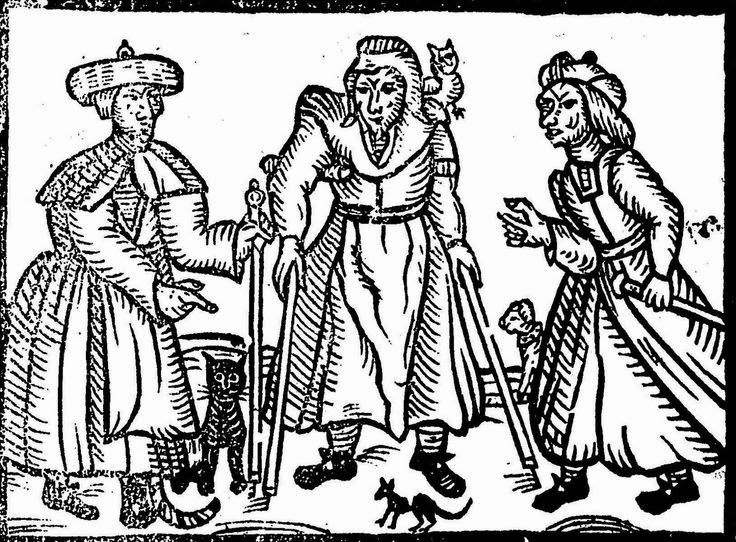