FOLKLORE ON FRIDAY - Live at the Witch Trials! Part III 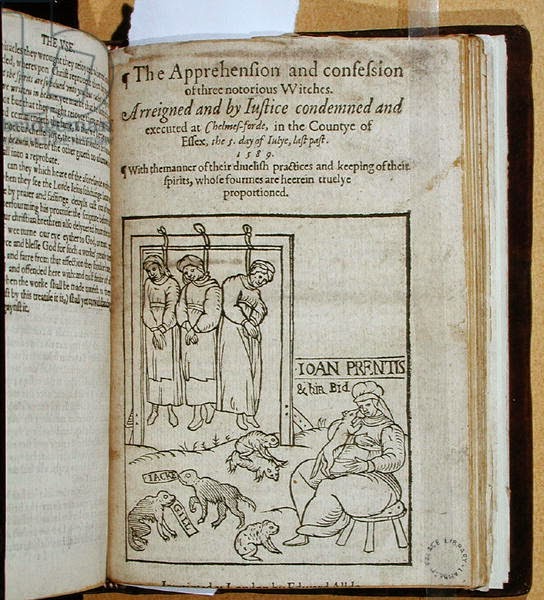 This week, we are continuing our investigation of a 16th century pamphlet that recounts the tale of three witches tried and executed in Chelmsford in 1589. Previously we have heard how both Joan Cunny of Stysted and Joan Upney of Dagenham had confessed to keeping familiar spirits in the shape of frogs, toads and "moule like" creatures, and sending these demonic beings out to wreak havoc and cause injury, illness and death.

Now the allegations of using familiars were a common feature in many of the witch trials in this period of English history. These beings were said to appear as common animals, albeit sometimes are freakish beasts rather than natural creatures, which could converse with their human masters and mistresses and possessed magical powers. Indeed in these three cases it would appear that all the alleged magic was accomplished by the familiars, with the witches merely giving them orders. For in England at that time, witchcraft was more seen as commanding and consorting with supernatural beings rather than the potion-brewing and spell casting the popular imagination depicts witches engaging in. Indeed in a statute against witchcraft, passed by Elizabeth I in 1563, very clearly defines the crime of witchcraft as being chiefly "Invocacons and Conjuracons of evill and wicked Spirites".  Indeed the three women on trial only appear to be witches by dint of the fact that they had access to familiars. Likewise Joan Cunny's daughters were also tried for witchcraft as they had used their mother's black frog sprites.

However while the confession of Joan Cunny tells of how she was taught to draw a circle and intone certain words to raise her familiar spirits (see Part II for details), claims of actually conjuring up sprites are actually somewhat rare in the accounts given at the witch trials. More common was the means by which Joan Upney received her familiars - being given them by another witch. And more interestingly after Joan Upney's  first familiar seemingly wore out, new ones came  on their own to replace it. However equally common was the way in which our third witch gained her little helper.

Joan Prentice lived at the Almshouse of  Hinningham Sibble (a town now called Sible Hedingham), and she related to the court that some six years previously, one wintry night some time between Halloween and Christmas, around ten o'clock as she was preparing to go to bed,  she received a strange visitation. For in her bed chamber appeared a dunnish furred ferret "with fiery eyes", who scampered towards her, and standing on its hind legs, placed its forepaws in her lap. The odd creature stared her in the eye and spoke, saying "Joan give me thy soule". The shocked lady asked what this creature was, to which the ferret replied "I am Satan" and went on to reassure her - "feare me not, my coming unto thee is to doo thee no hurt but to obtaine thy soule, which I must and wil have before I departe from thee". Joan replied that her soul belonged to Jesus, who had shed his blood to redeem it. And hence the wily ferret said "I must then have some of thy blood". And so Prentice offered the creature her left forefinger, which it bit and drank from. She asked again what the creature's name was and this time it replied its name was "Bidd". Then when her strange visitor had drank its fill of her blood, it promptly vanished.

However this was not the end of the story for Prentice then went on to relate how about a month later, the curious animal reappeared, again as she was preparing to go to bed. This time Bidd leapt up on her lap and sucked blood from her cheek. But after sating itself this time, the ferret spoke to her saying "if thou will have me doo any thing for thee, I am and wil be alwaies ready at thy commaundement". And so having had a quarrel with a local man, one William Adams, Prentice instructed Bidd to go and spoil the ale his wife was brewing. And so began a partnership or mischief and malice. Prentice only had to intone the words -

- and lo, Bidd would appear, and after drinking blood from her left cheek, would ask for instructions.

However recently the partnership had soured - a Master Glascock had turned her away while begging and so in revenge she instructed to Bidd to go nip one of his daughters, a girl named Sara, "but hurt it not". However the following night when the ferret returned, it reported that not only had the child been attacked but she would now die as a result. Prentice was horrified and chastised her familiar, who promptly vanished, never to reappear to her again. As for Joan Prentice herself, the court spared little time in finding her guilty, and like Joan Cunny and Joan Prentice, she was hung without delay.

While an account of a blood-drinking ferret, which may or may not have been Satan himself, may sound extremely weird to our modern ears, the witch trials that flourished in England in the late 16th and early 17th centuries were full of similar tales of familiar spirits. While European and Scottish witch trials were dominated with accounts of Black Masses and Sabbats, English witchery in these period was dominated by accounts of these supernatural creatures. However what is very strange is that during the period of these Essex witch trials, the use of torture was outlawed. Now historians have speculated that the lurid accounts of the Sabbats found in Scottish and European trials were the results of torture, but at the time of these Chelmsford witches, legally the courts were not allowed to extracted confessions by torture. Hence we appear to have here three ladies giving of their own free will these disturbing accounts of malicious familiars, confessions that they surely knew would seal their doom.

But most intriguing is the last section of Joan Prentice's confession, which indicates that the familiars were seemingly somewhat independent rather than servile beings.  For she claimed that she was not the sole mistress - indeed if mistress she truly was - of the demonic ferret Bidd. For she claimed that two other women, one Elizabeth Whale and Elizabeth Mott, wife of the town cobbler, also knew of Bidd, but she did not know what, if any, mischief it had carried out on their commands. Curiously, from the surviving historical records there is no indication whether these two other ladies were brought before the court. Bidd's current whereabouts remains unknown...