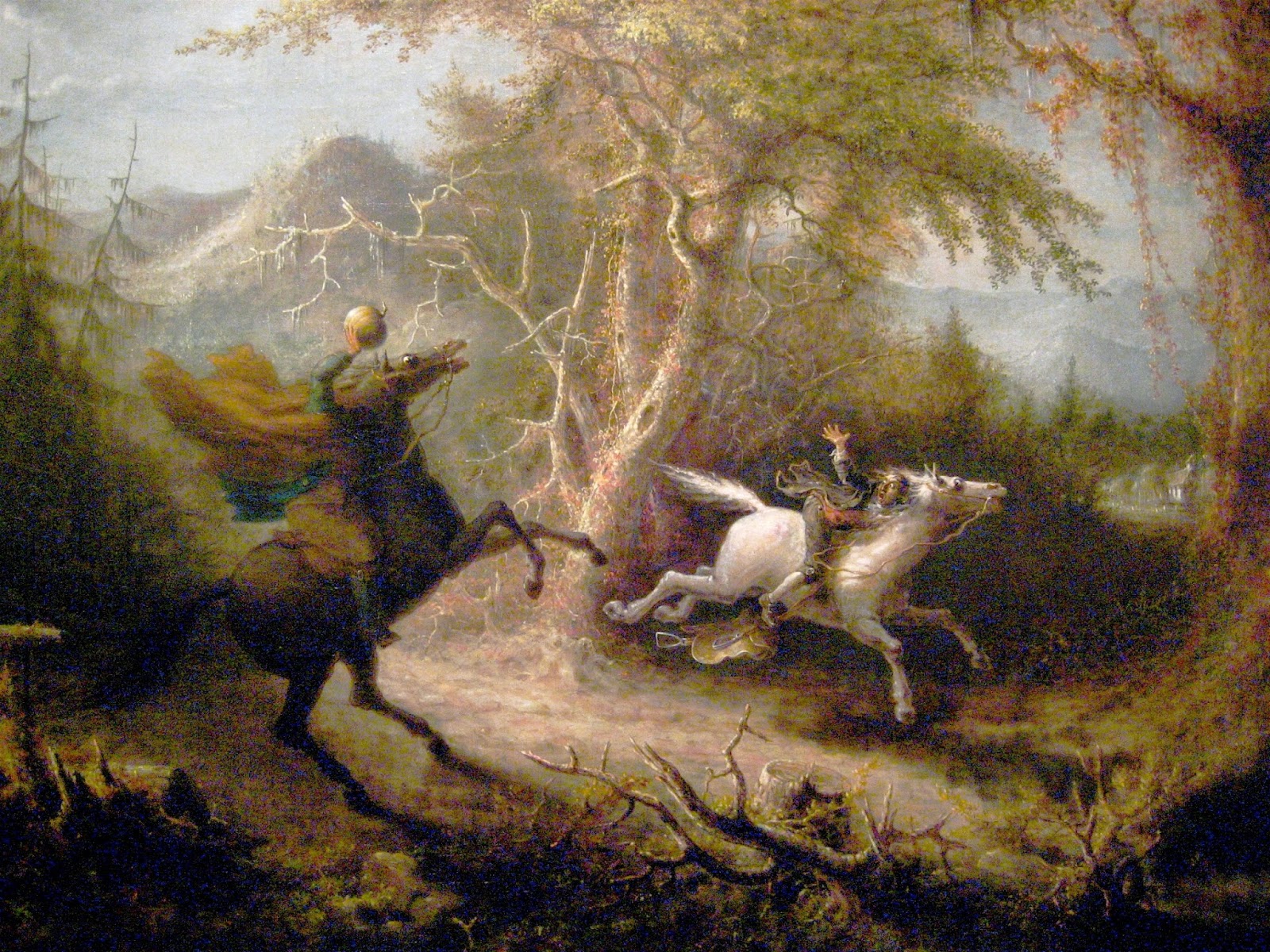 As Halloween approaches many of us will be planning a revisit to a certain old classic that has long been associated with the spooky celebrations at the end of October - Washing Irving's The Legend of Sleepy Hollow. This well-loved tale has been adapted many times over the years, and the story of Ichabod Crane's encounters with a sinister rider, in one form or another, has become a staple of many people's Halloween festivities.

Now in modern pop culture, spectres who carry their own severed heads are, after the classic sheeted spook, the most common image we associate with ghosts. And over the years many have assumed that the headless ghost owes its popularity to Irving's famous tale. However decapitated phantoms were very common in folklore and legend well before The Legend of Sleepy Hollow - for example Henry VIII's wife Anne Boleyn, who was executed by beheading, is reputed to haunt several places, strolling through the night with her head tucked underneath her arm. Indeed many areas across the world have a local legend featuring a headless ghost - sometimes they are historical personages, like the afore-mentioned Anne Boleyn, who were executed by beheading, but others lost their heads in war, by accident or in bloody murders, and these latter spirits are often alleged to be searching for their missing bonces!

But more specifically, headless horsemen are common too, and indeed there is an abundance of tales featuring cranially challenged riders which could have inspired Mr Irving. The Legend of Sleepy Hollow first appeared as a tale in a larger work The Sketch Book of Geoffrey Crayon, Gent. which detailed a tour of Europe conducted by Irving. And while on his travels, Irving particularly enjoyed various eerie tales, for example in the section Old Christmas he recounts hearing spooky tales told by a Yule fireside, and he records he was particularly impressed by a collection of German ghost stories.

Scholars believe this was probably one of the collections of folk tales and strange tales by Karl Musäus (1735-1787), namely Volksmärchen der Deutschen - as sections of this volume had been translated into English in 1791 and published under the title Popular Tales of the Germans. And indeed there are several tales of headless spectres, indeed including confrontations on lonely bridges and shattered pumpkins, which seem to have provided the model for Irving's tale.

Incidentally a tale from Musäus was translated into French and appeared in Jean-Baptiste Benoît Eyriès' Fantasmagoriana (1812), the volume that was read by Byron, Shelley, Polidori and Mary Shelley while on holiday at Lake Geneva. The party enjoyed reading these stories so much that they decided to try to craft tales of terror of their own, resulting in the creation of the vampire Lord Ruthven, the forerunner of Dracula, and most famously Doctor Frankenstein and his monster. Hence if it was a tale from Musäus that inspired Mr Irving, then the Headless Horseman of Sleepy Hollow may claim to be a close relative of the famous Gothic monsters.

However Musäus might not have been been the sole inspiration, for Tam O'Shanter by Robert Burns is a similarly horrific but humourous tale, and also which features a fellow pursued by ghosts and witches who is only saved by crossing a bridge... but more on the powers of crossing running water another day! Furthermore we know that Irving was much influenced by Sir Walter Scott who made much use of local lore and legend in his own works, and the folklore of the United kingdom is full of headless spooks and spectral riders.

Probably the most gruesome of these legendary headless riders is the Irish Dullahan, which means literally 'Dark Man'. Also known as as Gae Ceann (meaning 'without a head'), this being was a malevolent faerie that rode at night on a gigantic coal black horse carrying his own rotted head and brandishing a whip. This whip was made from a human spine used by the Dullahan to whip out the eyes of those who saw it riding. Sometimes the Dullahan was seen pulling a wagon decked out like a hearse with funeral regalia and sporting lanterns made from skulls, wheel spokes fashioned from bones and drapes of flayed human skin. The Dark Man was said to throw basins of blood over those it encountered who were soon to die, and would often relentlessly pursue unwary travelers. It was said that no gate or door could stop the dark rider, with any obstacle or barrier magically opening to allow him to reach his prey. However like many folkloric horrors, the Dullahan had a weakness - in this case a mortal fear of gold, and it was claimed that even a single golden coin could drive off the dread spectre! 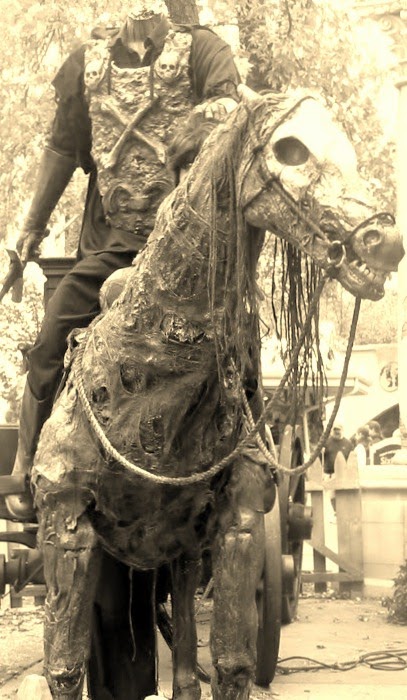