She Gives You That Weird Feeling! 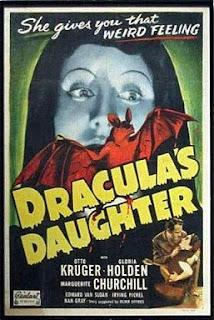 Yes, it's Universal chiller time again folks! And now we look at 1936's Dracula's Daughter. The idea of a sequel had been kicking around since 1933 and various treatments had been developed. At one stage the great James Whale was attached to the project and for quite a while Lugosi was slated to reurn as the Count. Lugosi got as far as appearing in publicity stills for the movie and was even paid for the role. However neither made to the final project, leaving us to wonder at what could have been...

But enough preamble and on to the movie that was actually made. Dracula's Daughter is more of a full-blooded sequel than the later Son of Dracula, Edward Van Sloan returns in the role and the last reel of the movie see a return to Dracula's Transylvanian castle, complete with it's famous cobweb wreathed stairs.

The action begining minutes after the close of the first film, with Van Helsing being arrested for the murder of the Count. And pleasingly we get something lacking in the first film - a shot of the staked vampire. After his arrest, the good doctor enlists a former student Dr Garth to aid his defence. And shortly after this, Dr Garth encounters Countess Marya Zaleska, who turns out to be ... well I'm sure you can guess.

Although strongly rooted in the original movie's mythos, Dracula's Daughter is closer to the moody chills of a Val Lewton picture than the gothic thrills of the other Universal horrors. (Indeed art director Albert S. D'Agostini when on to work on Lewton's series of RKO films). It focuses on the psychological rather than the supernatural, creating a very different kind of vampire movie. It presents the vampire in a sympathetic light; the Countess seeks to free herself from the curse of vampirism, firstly by burning her father's body and when this fails by turning to psychiatric treatment from Dr Garth.

Gloria Holden puts in a great performance as a tortured soul, torn between trying to honour her heritage but wishing for freedom from vampirism. On one hand there is the promise of salvation with Dr Garth, and on the other, the temptations of the dark side embodied by her servant Sandor (played with sinister aplomb by Irving Pichel).

The film is also notable for the possible first appearance of sapphic vampirism - the love that dares not spell its name. In a scene where the Countess surrenders to her needs, she preys upon a young girl Sandor has lured to her home. Watching this today, there definitely seems to lesbian overtones, however whether this is intentional is debatable. Apart from the problems this would cause for the film in the time it was made, in the context of the film it doesn't really hold up to scrutiny. Her previous victim is male, and though later in the film she kidnaps Dr Garth's amour, here her intentions are merely to use the girl as bait to snare the dashing doctor who she sees as a potential partner to share eternity with. However implied lesbianism aside, the scene is one of the most powerful in the movie.

Overall Dracula's Daughter is a classy little film. Although it has been seen as one of the weaker Universal horrors, it's subtle chills make for rewarding viewing. If you want more typical supernatural vampire antics, procede directly to Son of Dracula. But if you are a fan of the RKO Lewton pictures, which this film can be considered an precursor to, Dracula's Daughter delivers the same kind of artfully shot and character based horror.

One final though to round off this look at Dracula's time at Universal. It's interesting to note that the first trio of Universal Dracula movies all feature a good deal of romance. Lugosi's Dracula is a seductress of 'strange passion', Countess Zaleska is looking for a soulmate and Count Alucard is the foreign interloper in a young couple's relationship. Possibly this is due to the nascent horror movie having less well defined conventions or maybe the studios were seeking to broaden the appeal of the films (which would also explain the inclusion of comedy orderlies and policemen ). Whatever the origin, this theme distinguishes them from the pack of following vampire films, giving them a flavour of their own.

And when will I be looking at the Count's next Universal outing? Not for a while yet. First I intend on revisiting the Frankenstein films and in due course we'll reach the all-star monster rally House of Frankenstein where Dracula hooks up with not only Larry Talbot and Frankenstein's Monster but a mad scientist and his obligatory hunchback assistant...