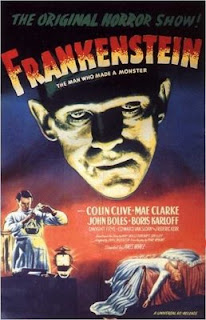 Yes it's been a while but we're back! Back I tell you! And armed to the teeth with thoughts on the Universal Frankenstein saga! Multiple posts imminent!

But enough of the Colin Clive ranting ... let us consider the first entry in the cycle - James Whale's Frankenstein (1931). What can one say about this movie? It's not just a horror classic but it's also a genuine giant in the annals of cinema greats. Whale's direction is accomplished, the lighting and sets truly evocative, Jack Pierce's astonishing conception of the creature, and a trio of stellar performances from Karloff, Clive, and Frye.

It's a historic film and still packs a punch today. So taking a glowing review as read, let's move on the more intriguing matter of the film's influence. Something both Mary Shelley's Frankenstein and Bram Stoker's Dracula have in common is that neither has been terribly faithfully adapted for the screen. However the reason for this comes from differing causes.

In Dracula adaptions, subplots are lost and characters enjoy a wide variety of role swaps and name changes but the essence of the novel is there. And though the Count usually differs from his appearance in the novel, particularly his rejuvenation throughout the tale, a screen Dracula can be relied upon to deliver whole lines from the book and and behave in the much the same manner as his literary antecedent.

However Frankenstein adaptions are a markedly different kettle of corpses. Very little of the novel remains bar the very bones of the plot. It's often quite a surprise for the reader to find how wildly different the book is. The major shock is the positively garrulous monster who is given to philosophical debating and could no doubt hold his own on University Challege. Other surprises include the vagueness of the creation, the monster learning English from Paradise Lost, and the fact that the whole business of the bride wasn't something dreamed up by sequel-hungry movie men.

What becomes very apparent is that screen Frankensteins are not really adaptions of this book - rather they are remakes of Universal's 1931 film. Hammer's Curse of Frankenstein took it's lead from the Universal film and but for threats of legal action would have featured a monster which looked like Jack Pierce's vision. Frankenstein - The True Story does borrow more elements from the book than most but largely does so within a Whale template. And 1992's Mary Shelley's Frankenstein (as mendaciously titled as Coppola's Bram Stoker's Dracula) was more Cuddly Ken's Remix Of Jimmy Whale's Frankenstein Flicks.

Nearly all the elements we associate with the Frankenstein story - lightning, brain transplants, hunchback assistant, mute lumbering monster, scars, bolts through neck - originate from Whale's movie rather Shelley's text. (The only major exception is the monster's trademark arms outstretched lurching - this doesn't begin until 1942's Ghost of Frankenstein which we'll get to later).

That's how iconic this film really is - it has supplanted the book as the 'real' version of the tale in pop culture. A rare feat indeed. And that's somehow fitting too - as people are still wont to think that 'Frankenstein' is the name of the monster, this is some what mirrored by the fact that when we think of the mad doctor and his creature, we're thinking of the version made by Whale not Shelley.