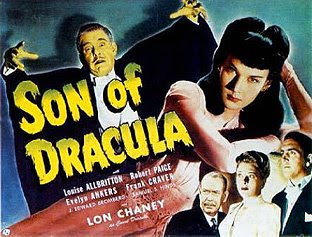 Yes, I 've been at that Monster Legacy boxed set again ... Now technically, I should have watched Dracula's Daughter next, being chronologically the next film in the Universal cycle but I skipped ahead as I'd not seen Son of Dracula since a BBC 2 late night double bill. (See post "Through a Glass Darkly" for more details). Also I thought it a more fitting follow-up to Spanish Dracula as they both have George Robinson on camera duties.

This movie finds a Count Dracula coming over to persent day America to ply his trade. Note that's 'a' Count Dracula - the script claims he is "probably a descendant" of the original and never claims him to be the son of Lugosi (unlike Marya in Dracula's Daughter who is definitely Bela's little girl). This doesn't harm the plot of the film any, in fact it gives the character a mysterious background more pleasing than any hamfisted exposition of the Dracula family tree.

The other thing to note is that he's travelling under the name of "Count Alucard" - which is the first time the Count uses the old reverse-your-name routine. Of course this ruse has been done to death now, but this is the original outing and in fairness, the film doesn't attempt to build any mystery around this. In the opening scene, we see the family crest on the Count's luggage and and a character traces the name backwards.

So down to the movie itself. Overall it's a far better film than it's misleading title suggests. Curt Siodmak crafts an intelligent script that subverts the viewer's expectations. If you've seen any other "Son of" films from this era, you'd be well within your rights to assume that the plot will merely rehash the parent movie. Yes, it's true the Count's aims are the usual come to a fresh young country to hunt a la Stoker, but Siodmak doesn't make this the wellspring of the action. I'll not go into spoiler territory here, as if you've not seen it I'd like to preserve the suprise of the plot twists. I think they warrant the secrecy as the story actually offers an original new direction for a vampire movie.

Visually the movie makes good use of it's Deep South setting. The spooky swamp sets look fantastic and the interior shots are beautifully shot and lit with a deft use of light and shadows.
There's a much talked of scene where the Count's coffin surfaces from the bayou which he then pilots across the murky waters.

The movie also doesn't stint on the special effects. The Count shifts into bat form on numerous occasion with a nifty use of subtle animation. On the whole there's a wealth of good bat work here. Sure they flap in a fashion that screams 'hey I'm mechanical and on wires" to a modern CGI-bloated audience but they are very well realised effects for its day. Like alot of old-time FX creature, these bats have a ton more charm and character than more realistic swarms flittermice that turn up at the drop of hat in today's blockbusters.

Even better though, and still looking impressive today, are sequences with the film's vampires transforming into mist. These effects looks simple gorgeous and genuinely eerie. And you do wonder "How the hell did they do that?" - smoky, drifting tendrils of fog not being the easiest things to matte on top of another scene. And certainly not on to the atmospheric sets lit with an interplay of light and dark.

The cast all perform well, though my favorite was J. Edward Bromberg's Professor Lazlo - this movie's resident vampire expert - played with a confident twinkle in his eye. Interestingly he sports the same type of round spectacles favored by both previous Van Helsings - is this traditional vampire hunter's dress? The good guy's equivalent of an opera cape and evening dress?

Now Creighton Chaney gets alot of stick for his portrayl of Dracula in this movie. I don't think he's "excruciatingly miscast" as David J. Skal puts it, but I do understand the criticisms of his performance. Indeed when I orginally saw this movie, I was unimpressed. But watching it again, I quite warmed to him in the role. In all fairness, he looks great - he cuts an imposingly tall figure and moves with the expected poise without lapsing into overexaggerated hissing and miming. However I think the problem many viewers over the years have had with him in the role is his voice - he doesn't have the sardonic charm of a Lee or the baroque speech patterns of a Lugosi. Also Chaney is so associated with Larry Talbot it's easy to start reading a pathos in his delivery that isn't really there. In terms of the movie though, it's important to remember he's only a Dracula not the Dracula, and if you think of the character in this light, I think he works well.
In the final scenes, where the Count is shown at his most monstrous, Chaney really knocks it out of the park.

So in conclusion then, this is a great little film. Far better than it's title would have you believe, and containing some very memorable scenes. Certainly I think it's had somewhat of a short shrift over the years but that's something that hopefully this rambling review may help to rectify.

Next stop on this tour of Universal horrors will be Dracula's Daughter. But if you're lucky I may get my act together and look at a few other things before continuing with the old school chillers. Or maybe not. Who knows? Not me...