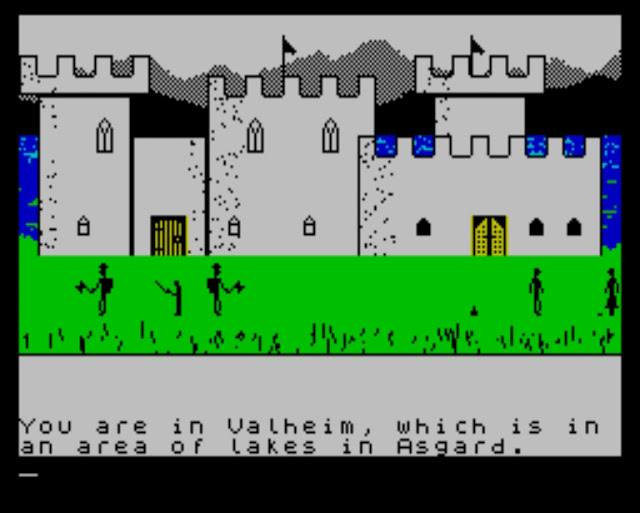 Welcome once more dear fiends to the 'Orrible 'Ouse of Terrible Old Tat! Or rather welcome back to Asgard and the world of Valhalla! Published in 1983 for the ZX Spectrum and ported to the Commodore 64 in 1985, Valhalla was, as we have previously discussed, a ground-breaking and ambitious game. It was worlds away from the legions of Jet Set Willy clones which were clogging up game shelves back then. But was the game itself any good?

It certainly sounded like it was going to be amazing - hanging out in a world of Norse gods and monsters, undertaking epic quests, and generally being allowed to do what the hell you liked. Well, provided you could get the bugger to load that is - for the first drawback to Valhalla was a long loading time, which greatly increased the chances of it crashing.  However once you listened to the five  or so minutes of electronic screeching - surely a formative influence on a generation of kids who would grow up to invent acid house, techno and jungle a decade or so later - the first thing to strike you is the scale of the world.

The game plays out in three distinct realms from old Norse cosmology, Asgard (the world of the gods), Midgard (the land of humans) and Hell (realm of the dead). Traditionally in Norse legends there were nine worlds, with additional realms for giants, elves, dwarves and so forth, but here three worlds work well enough. And just like in the old sagas, brave heroes could physically travel between the worlds. Now in the game, theses worlds of possibly exciting adventure where comprised of some 81 different screens, each one a separate location - as can be seen here map of Valhalla. Now travel between the locations was accomplished in the usual text adventure fashion i.e. typing into "go north", "go south-east" etcetera. And there were some short-cuts available too - some screens/locations had hidden "ringways" - magic portals that teleported you to another location if you possessed a magic ring.

But there were two downsides to all of this. Firstly you really needed to make some kind of map if you wanted to avoid becoming hopelessly confused and lost. But more importantly, travelling to another location meant the game had to draw another scene. Now the Movisoft engine did so by drawing in layers - first the background, then the midground, foreground, buildings, people and any items there. Hence travelling was a bit on the slow side as it tended to take about half a minute or so to render everything. Now playing Valhalla now, this kind of thing makes the game very slow and tedious indeed, however in fairness back in the day people didn't expect things to happen super quickly quite as much, and this kind of waiting for the computer to render a new screen wasn't exactly uncommon in the early adventure games. Plus it's easy to forget now how impressive the graphics were back then, for it was only a couple of years earlier than game graphics had consisted of basic shapes such as rectangles and squares moving about. And of course there was a novelty value to watching the computer draw in each scene layer by layer too. 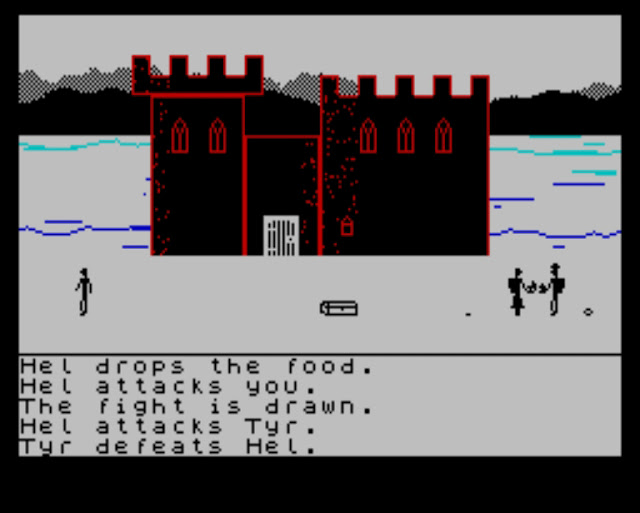 Now as for doing the quests, while the instructions which came with the game were good,  it took so long to travel anywhere or get anything done, many players soon got distracted and started just having fights for the hell it and generally running amuck. Which is arguably closer to how real Vikings might have behaved... Well, that was my excuse anyway. But anyhow, historical accuracy aside, the game itself had a certain sense of mischief to it anyway. To begin with you could spend many happy hours egging on various gods and monsters to fight each other, but Valhalla had some mischief of its own up its sleeve too. 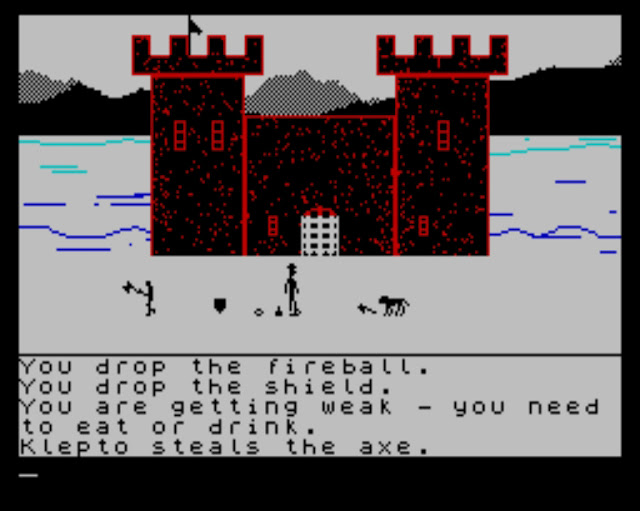 Firstly as the program had a limit on how many items could be in any one location. There could only ever be eight items in one place, whether on the ground, in a chest, or in a cupboard.  And if this limit was exceeded, the game had a novel and amusing solution. For the very second a ninth item was dropped, a character cheekily named Klepto appeared and stole one!

Which item got pilfered by Klepto was entirely random, and hence it was very possible he could take one of the much sought magic items you'd been questing for if you weren't careful. Of course, should this calamity befall you, you may very well ended up typing in "Klepto is a little shit" into the game... Although in fairness, given the freedom offered by Valhalla, and bearing in mind the general character of kids, if you were playing this back in the day, you'd no doubt already been typing in every rude word you could think of. 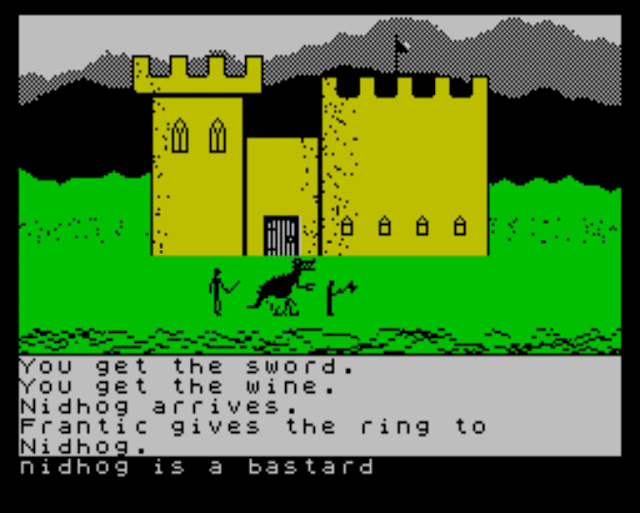 However this would reveal another of Valhalla's little jokes. For swearing elicited the cryptic response - "Mary is not amused".  And a small figure would march on the screen and come and give your character a slap! Now if you are thinking "hang on, I don't remember a Mary in Norse mythology!" you'd be quite right. For this character was named after a very familiar and often hated figure in 1980s Britain - the self-appointed moral guardian Mary Whitehouse.

For many years Mrs Whitehouse campaigned relentlessly and fearlessly against swearing, sex and violence in our media, and as a result was seen by many as being more terrible than all the monsters and demons of Valhalla, mainly of course by kids who were mad keen to see all that swearing, sex and violence. Ironically, many of us only learned about the existence of some erotic TV series or violent movie in the first place thanks to Mrs Whitehouse protesting about it. Naturally when playing Valhalla, it was great fun to just bait Mary, albeit in a pixelated form. And of course, a new unintended subgame emerged - and that was trying to discover exactly how many and which swear words the game's text parser recognised! 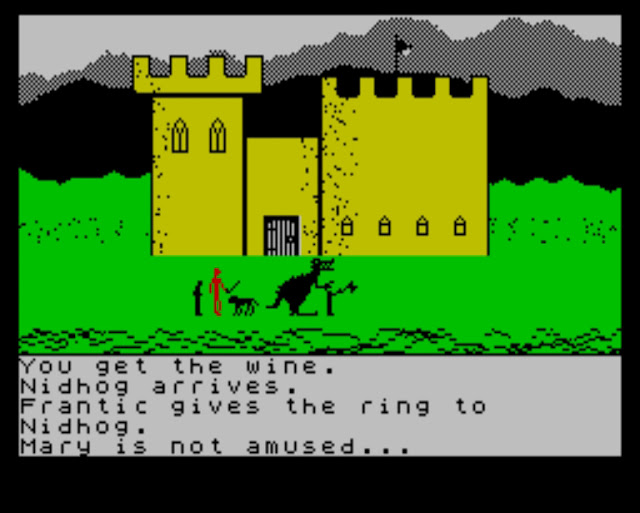 Now of course, it would have been child's play to have the game's text parser not to recognise any swearing at all, but a generation of kids are very glad that they did. After all, anyone who played The Hobbit really wanted to the game to recognise the command "Tell Thorin to shut the fuck up about gold". Quite clearly, the programming team behind Valhalla had played more than a few adventures and what's more understood the mindset of their target audience. Hence Mary was a fun way to allow you to swear within the game, but, and this is the clever bit, in such a way so that boring grown-ups, who had a massive downer on computer games anyway, couldn't kick off about it. Now that's real genius!