THE 'ORRIBLE 'OUSE OF TERRIBLE OLD TAT - Valhalla I Am Loading! 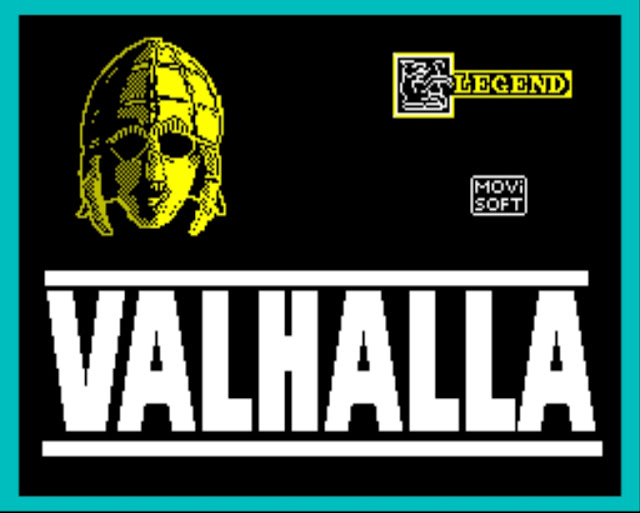 Hello dear fiends! Welcome once again to the 'Orrible 'Ouse of Terrible Old Tat! Now then, last time we were adventuring in the long lost lands of home micro gaming, searching for treasure, slaying dragons and wishing Thorin would stop singing about ruddy gold all the time. As we discussed at some length, the home micro version of The Hobbit back in 1982 was something of a milestone in computer gaming, and a newly formed company called Legend was very keen to pick up where Bilbo and Gandalf had left off...


Now Legend, a spin-off company from business software outfit Microl, were not fly-by-night (or should that be type-by-night) games publisher. Unlike dozen of other software houses that sprang up around the same time - for there wuz gold in tham thar gamin' hills - Legend didn't release hundred of titles which most consisted of titles that looked suspiciously similar to other hit games. Rather they released a handful of high quality titles, with their first offering Valhalla setting the bar rather high.

Written for the ZX Spectrum, and later ported to the Commodore 64, Valhalla was a game that came in a big box that screamed "QUALITY PRODUCT", and with a price tag to match - a very very expensive for the time £14.95. Although it was re-released a few years later as a classic title, in more modest packaging and at the pocket money friendly price of £2.99.  Valhalla was created by Richard Edwards, Graham Asher, Charles Goodwin, James Learmont and Andrew Owen, and was mostly written in the common language to home micro's BASIC, with the game engine being dubbed "Movisoft", which sounded very futuristic and interactive. In fact it's a very early example of a game having a named software engine.

And very impressive it was too. Like The Hobbit there was a vast world to explore, a large cast of characters to interact with and you played the game by typing instructions into the game. The downside of this ambition was that the game notoriously took bloody ages to load - well over 5 minutes to load - which a long time even in the era of the home micro when loading a game took several minutes. As one reviewer of the day quipped "I only just had enough time to load Valhalla - let alone review it". And as with many of the larger home micro games, a longer loading time meant increased chances of the game glitching and not loading properly. I know of several folks who never got the darn thing to anything by display the loading screen. Which was admitted rather nice, showing a digitised version of the famous 7th century anglo saxon helmet found at Sutton Hoo, but not exactly as thrilling as hanging out and fighting with Norse gods and giants.

So then, provided you got the game to load properly, what did Valhalla offer the player? Well, the goal of the game was to collect six magic objects - Ofnir (a key), Drapnir (a ring), Skornir (a shield), Skalir (a sword), Felstrong (an axe) and Grimnir (a helmet). These magical treasures could only be collected in order, hence to get Drapnir you had to have Ofnir first and so forth. And while the items were in particular locations, if you died, any you had would be taken from you and hidden a random somewhere in the game world. On the upside however, dying was not a big deal in a world of gods and monsters, for if you were slain, you found yourself in Hell. However in accordance with the old legends and sagas, the land of the dead as just one of nine worlds in the old Norse cosmology, and hence just as you could travel from the world of men (Midgard) to the realms of the gods (Asgard), if you had died, the adventure wasn't over, you could just walk out of the Hell and continue your quest. 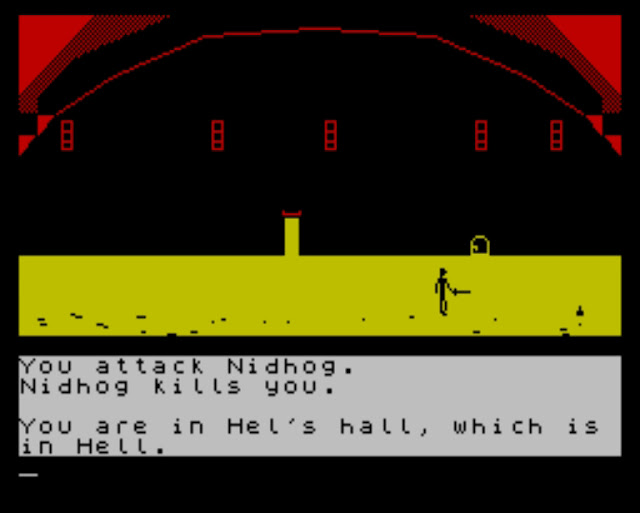 Valhalla also had some rather clever features too. Those of you have know your Dungeons & Dragons (whether as a tabletop game, or one of the many computer RPGs that use its rulesets) will be familiar with the concept of a player's character having an alignment - that is to say, a defined trait which maps out their philosophy and morals, whether good or evil, an upholder of law or a devotee of chaos. Now in Valhalla, your character doesn't have the usual RPG style character sheet with stats and traits, but very cleverly the game does take note of how you behave in the game world. When you begin your character is neutral - that is to say he is classed by the game as neither good nor evil. However as play progresses, your actions are noted by the game engine and other characters in the world of Valhalla will react accordingly. Hence if you are helpful and friendly to characters on the side of good such as Thor or Odin, all characters on the light side of the Force as it were will be inclined to be more helpful to you in your quest. Likewise being chummy with the likes of Loki will earn you favour with the forces of darkness. A very cool bit of programming I'm sure you will agree, and very ahead of its time.

However Valhalla has an even bigger claim to fame, for it was one of the very first true open world games. Now The Hobbit is often hailed as being a pioneer of open world gaming as you could head off anywhere into Middle Earth, but at the end of the day if you wanted to get anywhere at all in the game you still had to follow a linear plot that mirrored the journey and adventures in the original book. Now normally in RPG games, the world waits for you to do something and then reacts, but things were not like that in Valhalla. Here the world of the game carried on regardless of what you were doing, characters would go about their business without waiting to react to you - they would travel between the world, eat, drink, and fight as they pleased. In fact, once the game started it would essentially play itself. Obviously that's not to say it would make choices for you and you could sit back and watch the game do the quests for you. But on the other hand, events in the game weren't tied in the slightest to you doing the quests, and indeed if you just wanted to explore, hang out with the gods or get into fights - i.e. generally doing what the hell you liked - you could.


Now all of this is obvious very impressive... But technical cleverness doth not a great game make. After all, there have been many titles down the years that boasted, revolutionary concepts, groundbreaking coding and super new spanky graphics, but in terms of actual playability have sucked harder than a Hoover on overdrive! Next week, we are dusting off the old Spectrum, praying the rubber keyboard hasn't perished, and will be playing Valhalla! 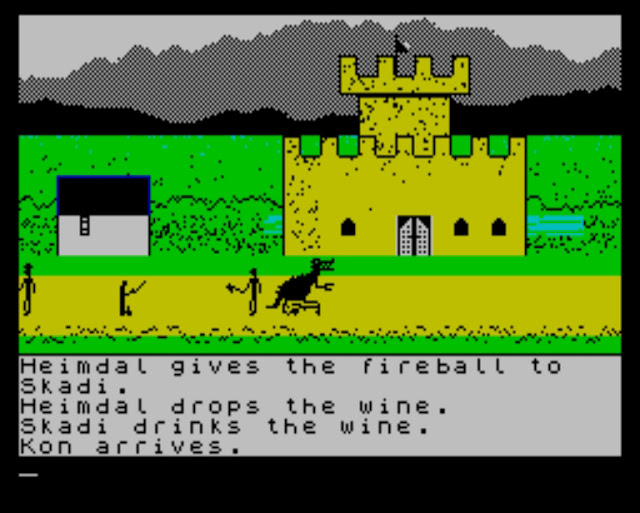