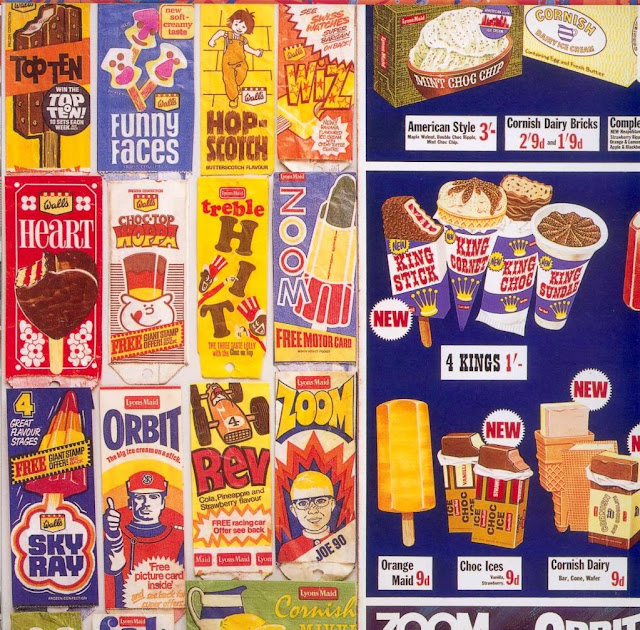 Hello dear fiends, and welcome once again to the 'Orrible 'Ouse of Terrible Old Tat! Yes, I know it's a bit of state but I bet you're glad to be indoors! For outside, the skies are an angry slate grey, a chill wind cuts through you to the bone, and the windows are rattling from lashings of icy raindrops! And you know what that means, don't you? Yes, that's right, the British summer has begun!

However things weren't always this way... I appreciate it is a massive cliche of Kong-size proportions, but I do remember a time when summers in this green and pleasant land were long, hot and filled with sunshine, rather than the several months of weather roulette we now get. Possibly we do need to consider burning our leaders in wicker men again to get Evil Yellow Face to put in a few solid weeks of work rather than the skiving off with outbreaks of token appearances we now get... But, I digress...

However it is true that British summer used to be better, and to prove it, in a highly scientific and not at all trivial and flippant manner, I present the following facts. Back in the days when summers were long and hot, school holidays lasted forever, and all this used to be fields, there was a thriving industry producing cold snacks to give the Great British Public a tasty treat and a way to cool off. Now you may know them as ice pops, freezers pops, ice poles, freezies, ice blocks, popsicles, or Mr Freeze's bollocks, but over here they are called ICE LOLLIES.

Now the arcane art of freezing some flavoured juice or ice cream onto a stick had been around (allegedly) since the 1920s, however it wasn't until the 1960s when lots of local stores and corner shops could afford to have a freezer cabinet to chill their wares, that the ice lolly really took off. And in the UK, in the '70s there was a huge explosion of frosty snacks, with an ever-escalating war for dominance in the ice lolly market being waged across the land. 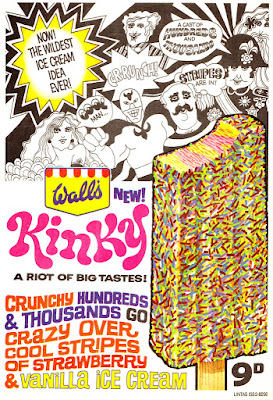 Now obviously there are only actually a small number of flavours that are suitable for the ice lolly market. Basically, you are limited to sweetie favourites like chocolate or mint, and the more popular fruits, (orange, banana, lime, strawberry etc.). You can - and indeed over the years assorted lolly wizards did - try to cover more exotic fare such as mango, melon or starfruit but generally the public thought they just tasted like insipid versions of the big players in the fruit flavour world. However strangely no one ever attempted to break into new, uncharted lolly territory with savoury flavours such as beef gravy, pie and chips, or hedgehog... and probably for very good reason, come to think of it.

So then, with only a small number of flavours to work with, how did you get ahead in the Great Lolly Wars of the '70s and '80s? Well, the simple answer is licensing! And here's how you did it... Take note of something very popular with the kids, say the Incredible Hulk, who at the end of the '70s was enjoying the heyday of the Bill Bixby TV show and had his own newly launched UK comic. Then take one of those fruity flavours you are already selling that's a purply red colour, coat the top half of the lolly with green candy sprinkles, and voila you now have "an Incredible Hulk.... trapped ice!". Or rather, you have a lolly that's half green and half purple, which if you squint and use near psychotic amounts of imagination resembles the Mightiest Mortal on Earth. And admittedly it's a Hulk with a stick up his arse, but you'd best not think about that too much as it'll put you off your lolly! 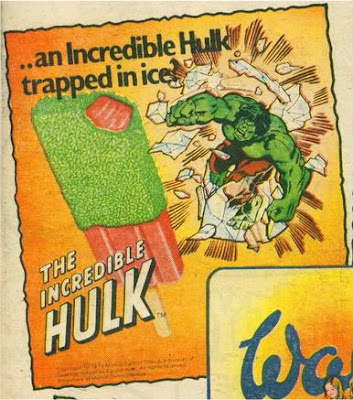 Of course, such licenced lolly fare often had a short shelf life (or should that be freezer life?), and as soon as the film/TV show/character's popularity waned their lollies would vanish from the big colourful boards on the shop freezers that advertising the icy treats available within, and were often replaced by a suspiciously similar lolly in a new wrapper tied to some other property the following summer. Yes, it was a cheap and cynical way to flog lollies, and in some of the more egregious instances allowed unscrupulous icy-treat makers to sell the same damn flavour of lolly twice, one under a kid-attracting licensed wrapper, and another as a plain just-the flavour-title version. But cynical it may have been, but it work a treat! And it's a testament to the size of the ice lolly market back then when we had proper summers that there were so many tie-in lollies available.

Eventually in the mid '80s, the Great Lolly Wars came to an end when the manufacturers realised there was more money to be made flogging expensive ice cream based confections to grown-ups, as after all, they had all the cash. Why bother attempting to harvest the loose change of pocket money when you can empty the entire wallet if you can convince adults that scoffing giant buckets of ice cream loaded with enough toffee, chocolate and cookie pieces to kill an army of diabetics is actually a very grown-up and sophisticated thing to do? But before those dark artery-clogging days dawned, there was a golden age of great wrapper art, inventive adverts, and some very fun gimmicks! And we'll be having a look at some of the more weird and wonderful products of the Great Ice Lolly Wars over the next few weeks...