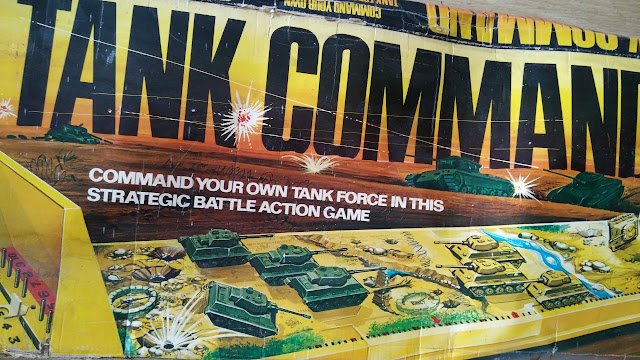 Welcome once again dear fiends to the 'Orrible 'Ouse of Terrible Old Tat! This week, we've been digging in the games cupboard once more and I've dragged out another item from yesteryear to tease and tantalise your memory. Or rather, perhaps in this case, to re-open old wounds and childhood traumas. Yes, I know, I'm all heart!

Well then chums, you know what they say... Some games are born great. Some games achieve greatness. And some games have greatness thrust upon them. And today's offering is absolutely none of those! It resides far away from any of those categories, for it is a game that will never in any circumstances come anywhere near great in any way, shape or form. It  truly puts the 'bored' in board games, and also was the cause of many a pernicious case of long-lasting bitter disappointment. In fact, for a certain generation of kids, it is a strong contender for one of the most disappointing toys ever foisted upon an unsuspecting public.

And what is this benighted game? Well it is Tank Command from Ideal. Now when this hit the toy stores back in 1975, this looked massively exciting. And what's more there was a whole generation of little boys eager to lap up anything with a World War Two flavour. Growing up in the early 70s, WWII was literally everywhere - on the telly there was Colditz, Dad's Army, Secret Army, and probably some other shows with 'army' in the title too that I can't remember right now. Toy shops were stuffed with Action Man in a variety of WWII uniforms and vehicles, the must have board game was Escape from Colditz, and all that before we get to the battalions of Airfix models and legions of toy soldiers. And British comics for boys were full of vintage warfare too - in 1974 DC Thompson had launched the highly exciting Warlord comic, while in early 1975 IPC had responded with the ground-breaking and gritty Battle Picture Weekly. Indeed there was so much World War II everywhere you might have thought that the war was still going on, or at least had only just recently ended.

So then in this war-torn climate, a game promising explosive battles between armoured divisions was obviously a sure-fire winner! And no doubt that is exactly what veteran British toy fim Ideal thought, and they whipped up a suitably exciting advert for the telly to promote this latest slice of WWII action! And what an advert it was! Check it out!

It is a very clever advert and one that has haunted the minds of the target audience for many years, although admittedly not perhaps for the best of reasons. But a brilliant example of the advertiser's dark arts it certainly is. To start with, note that it features two Dads playing the game, instantly giving it a sparkly coat of "this ain't just kids' stuff, sonny" - always an attractive sheen that plays well with the kids. No annoying stage school brats here! Secondly, it is a powerful indicator of how much WWII imagery was floating about in children's culture back in the mid '70s that the advertisers knew full well that the target audience would instantly recognise facsimiles of Field Commander Montgomery and Rommel. It seems strange now, but I can attest that this pair of famous foes did have almost pin-up status among the schoolboys of Britain at that time.

But thirdly, and most cunningly of all however, note too that this ad pitches the game as an exercise in strategy. Oh no, this isn't just glorifying war, dear parent, it's educational, it's like chess! However the ad manages to have its cake and eat it, for it also makes very clear that for all its talk of cunning and strategic play, it is actually about FIRE! BANG! FUCK ME! DID YOU SEE THOSE FUCKING TANKS GO FUCKING EVERYWHERE? I BET THEY SMASHED EVERY FUCKING WINDOW IN THE BASTARD HOUSE FLYING OFF THAT FUCKING BOARD!

But it's true! Could this game either a) look anymore exciting and b) say anymore clearly:  BUY THIS NOW YOU LITTLE BASTARD ?

Yes, the advertisers knew their market well. What's more they understood that Tank Command was a BIG PRESENT. That is to say, this wasn't something you bought with your pocket money, or saved up for. No, this was a job for a birthday, or a top item on a list to Santa. Hence the ad is designed to generate maximum pester power from the kids, while at the same time appearing worthy enough to appeal to parents. 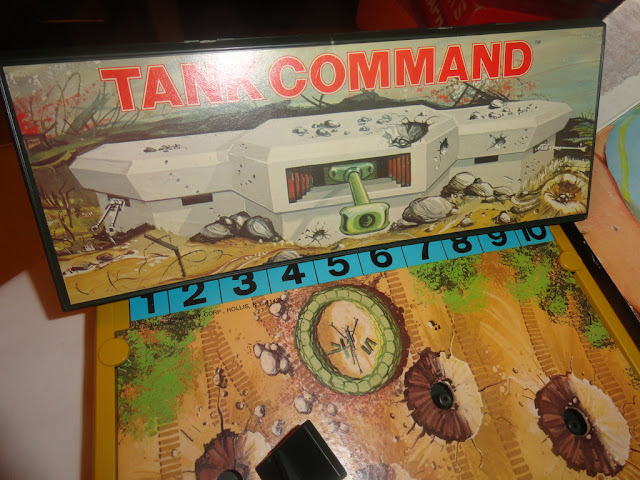 However there was one ghastly snag to all of this, one that would only become apparently after the wrapping paper had been torn off. That was that the game itself is actually mind-crushingly dull. Basically for all the talk of strategy, shells and tank combat, what it all boils down to is this. The players simultaneously fires a shell at each other. And this is done by... wait for it... picking a number between one and ten, represented by some odd looking pegs nestled behind screens at the ends of the board. The choices are revealed - the screens tilt open you see - and whoever picked higher wins. The two numbers are added together, and the winner gets to move his tanks forward by that amount. And yes, all the tanks move all together, all the time. So there's no exciting manoeuvers here - it's just all forward or all back. In a straight line. Forever! Then shells are fired again, I mean, numbers are picked again, with the twist being that you can't pick a number you've had before. And this continues until one side's tanks have been pushed back onto a minefield i.e. the edge of the board. Or rather in most case, until all the numbers are gone. In which case, you play another round. Oh, still my beating heart!

And what about the explosive action? Well once on the minefield, you can pull a string with a knob on the end... And no, I'm not referring to how you felt for being suckering into getting this game. No, you pull said string and this raises some little pegs in the mines which then knock the little tanks out of position... A bit... Sometimes... If you were lucky...

Yes, there was certain a noticeable dearth of model tanks flying into the air in an explosive fashion. And what's more, a distinct lack of any excitement in the gameplay, which essentially was just picking random numbers. All too often, the result of the "shelling" was the tanks driving forward and back over the middle of the board, with neither side reach the mines. Yes, Tank Command was something of a wash-out. Which is a shame really, as the game parts themselves were very nicely designed - the board looked fantastic, and the model tanks were nice. 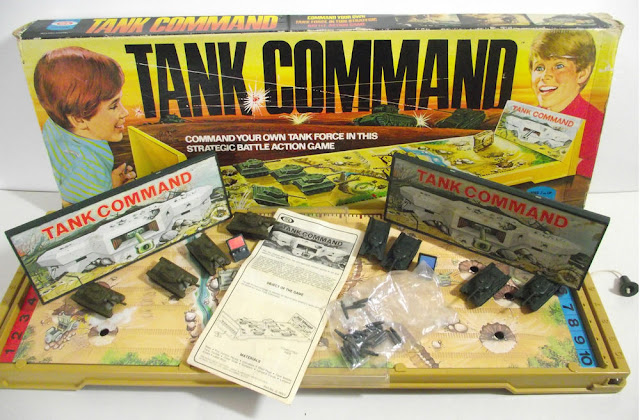 Now arguably, all this pointless lurching about in No Man's Land was actually a highly accurate simulation of what was really happened much of the time in World Wars I and II, but historical accuracy doth not necessarily make for an exciting game for ages 8 and above. And in this case it most definitely didn't; a fact compounded by the feeble nudging of toy tanks that came in place of the flying models seen in the advert. Indeed, for many of us, Tank Command was a first and bitter lesson about truth in advertising...

There is a family resident in my town that I believe still play Tank Command. The youngest son, who is older than me, was said to have the largest known collection of Victor, Warlord and Hotspur comics in the world. It may be that hes to busy re-reading them to get a job, it would seem.
I sometimes wonder if hes busy converting them all to audio book format for the benefit of an old comrade, perhaps blinded up the woods by a homemade mustard gas bomb (mustard, flour, vinegar) in a frenetic game of commandos at the age of 15.
ST.CLAIRE

Looks like Claire escaped from the Daily Mail comments page... bad English and all.

RICHARD LITTLEJOHN IS AWAY

Ha. Looks like St.Claire's work-shy tank commander has caught up with him. Either that or an old English teacher. "Bad English" indeed. I think the term is "the pot calling the kettle black" but correct me if I'm wrong.