The 'Orrible 'Ouse of Terrible Old Tat #06 - Which Which Witch? 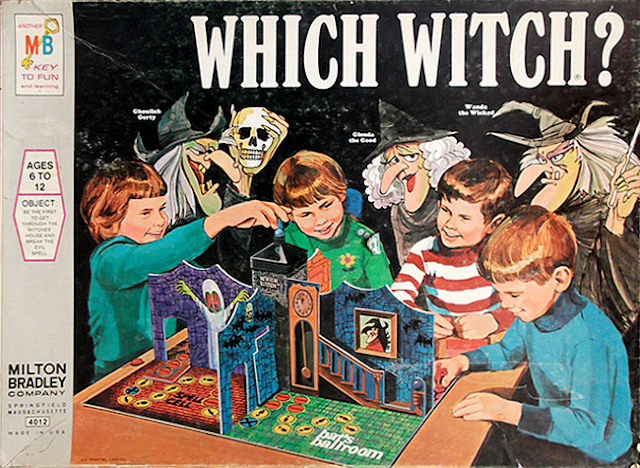 Welcome once again dear friends to the 'Orrible 'Ouse of Terrible Old Tat! Do come in, just be careful you don't trip over all those dropped 'h's though. Anyhow this week we are looking at a particular item, or rather a family of items, that I really should have opened this blog series with, as it appeared in the logo illustration for the introductory despatch from the 'Orrible 'Ouse. Look I meant to, honest! But as you can see this place is permanently in a bit of state, and I couldn't get to the boxes for a load of old Doctor Who dolls ok!

Anywho, this week I've dredged up an old board game that I'm guessing made many an appearance on Christmas lists and birthday requests. It certainly was the star item on one of my childhood missives to Santa, and the Bearded Gent did indeed come through on this one. Now that much anticipated item was a board game called Haunted House, and unlike many other much hankered for toys, this one did not disappoint! And looking back, I think it was my favourite childhood board game, and was played with for many many years on a regular basis. 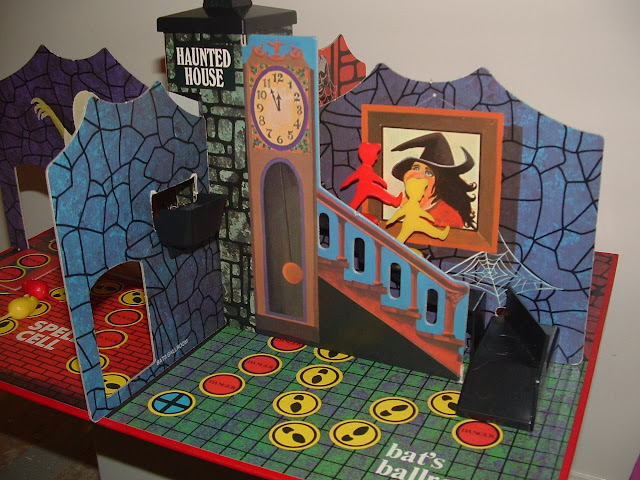 And my experiences with Haunted House is clearly not in any way unusual, for this is a game whose mere mention triggers a wave of nostalgia in several generations. For this is a board game that has never been long off the shelves, and indeed, it's still available in toy shops to this very day. In fact it's now only a few years shy of being 50 years old! I reckon it's only the fact that this board game has gone through several rebrandings that has prevented it from being recognised as a true classic.  So then, let's have a quick wander through its long history...

The spooky treat first appeared in 1970 in the US, a creation of pioneering board game makers, Milton Bradley (later known as MB Games), under the name Which Witch. It initially came in a huge square box the size of the board itself, but was reissued a year later in a more familiar, slimmer rectangular box that was way easier to get in the toy cupboard, thanks to it now having a more convenient folding board. Now the same year as the folding board made its debut, 1971, it made its first transatlantic appearance, released in the UK by Denys Fisher. And while the game pieces, rules and box art were identical, it was now called Haunted House. European versions began to appear soon after too - in Spain it became Embrujada (Haunted), in France it was Le Manoir Hanté (The Haunted Manor), in German it was Spukschloss (Haunted Castle), and in Italy it was Castello Incanto (Castle of Spells) and also Brivido (Shiver).

In all its incarnations, Which Witch/Haunted House sold steadily for many years. In 1975, there was the first evolution of the game, with Denys Fisher releasing a rejigged version entitled New Haunted House. Reflecting the new moniker, there was new box art, and the titular witches disappeared from the game, being replaced with ghosts, and one of the game's gadgets, a broom trap becoming a falling knight. In the mid '80s the game evolved again, with a few more tweaks to the mechanics and pieces, and it actually became in two distinct versions. 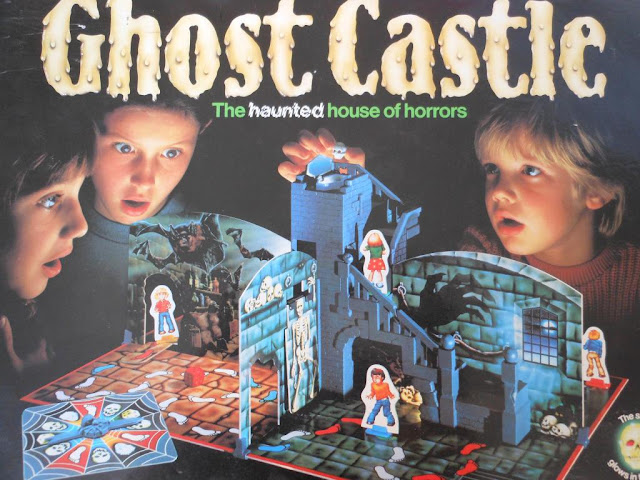 The more short-lived one, which appeared in toy stores in 1986, saw the now venerable game re-skinned to be a tie-in to the Real Ghostbusters cartoon series, and was called, unsurprisingly, The Real Ghostbuster Game. Needless to say this spin-off edition did not last long. However its other '80s incarnation, released the year before in 1985, proved to be far more tenacious! Ghost Castle from MB Games, brought some more tweaks to the game, several of witch, sorry, which had been first seen in some of those European versions. The main changes were the tower on the board becoming a more durable plastic, a deck of cards becoming a spinner, and a ball being replaced with a skull! A plastic one, not a real one I should point out...  Anyway, since then the game has more or less stuck to its new name of Ghost Castle, and indeed the game is still available to this very day, with the current version being issued by Goliath Games.

So why has this game been so popular over the years? Well, we'll be bringing out the board and setting up the haunted house in all its glory next week to take a proper look at the gameplay. And along the way we'll note some of the changes and evolutions it has undergone in nearly five decades of providing spooky thrills! 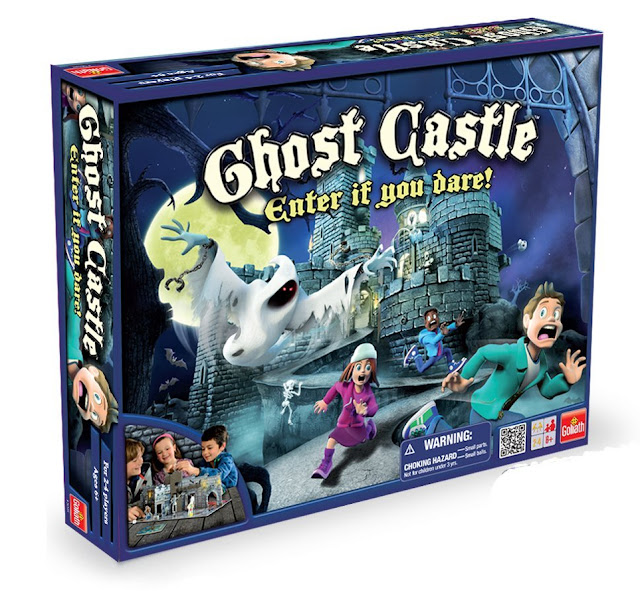