FOLKLORE ON FRIDAY - The Turning of the Stone 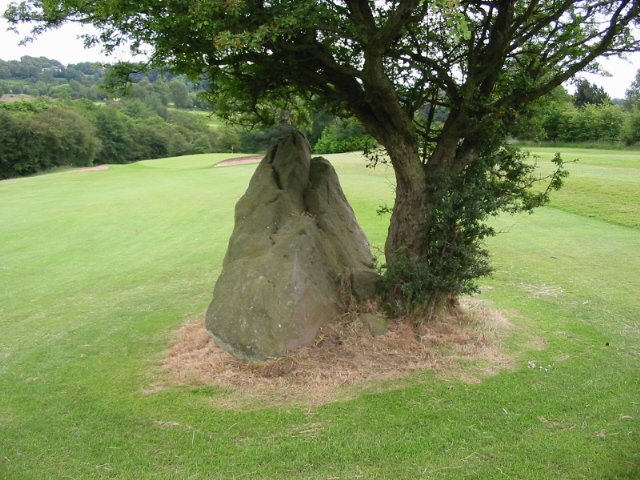 Over the past few weeks, we have been examining curious legends about assorted ancient stones, in particular the strange tales that claim many of them possess the magical ability rotate or turn themselves at certain times, usually at midnight or sunrise. So far we discovered that such fanciful stories of revolving rocks often don't appear to have any clear origin, and in many cases seem to be a gloss on to any existing folklore surrounding the site.

However a possible clue to the source of these stories perhaps lies in the fact that many of these stones have previously been assumed to be some surviving monuments created by prehistoric or pagan people, when in fact often they are actually natural features of the landscape or of more recent construction. A typical example is the Cuckoo Stone in Derbyshire (shown above), a large rock to be found just outside Matlock. This huge stone has often been thought to be a surviving megalith from ancient times, and its jagged, spiky shape is very reminiscent of other standing stones. However despite stories of a lost stone circle in the area, modern scholars tend to think it is just an natural boulder.

However its name has an interesting tale to relate. It is thought that 'Cuckoo' is a corruption of 'cock crow'. For like other ancient stones we have been discussing, this imposing rock is said to turn itself around if it hears a cock crow, presumably at dawn, and upon certain days of the year. However which days of the year these are, no one is very clear about. And yet other tales add the claim that the Cuckoo Stone also revolves at midnight too. Again we have no clue as to why this stone should gyrate in this fashion other than a long standing association with being a possible site of ancient worship. 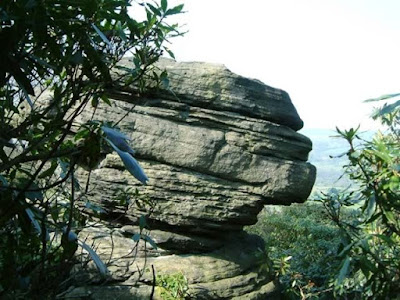 Not far away from the Cuckoo Stone, just outside Ashover, is another revolving rock, the Turning Stone. Much like the Cuckoo Stone, the Turning Stone is alleged to revolve at certain days of the year at cock crow. However once again the old local lore doesn't actually specify which days of the year this occurs on. Given there is only around 5 kilometers between the two stones, one can't help wondering if the legends have spread from one to the other. However we should note that both stones' names refer to their alleged usual rotating antics.

Now the exact origins of the Turning Stone are unclear - it could well be a natural formation but largely due to its proximity to what is very likely a man-made megalithic structure called Robin Hood's Mark,  it has been assumed to be a relic of ancient man. An 18th century antiquarian, Hayman Rooke in an article entitled  'An Account of the Druidical Remains in Derbyshire. In a Letter to the Right Honourable Frederick Montague, FAS. By Hayman Rooke, Esq. FAS.' published in n Archaeologia v12 (1796), has this to say about Robin Hood's Mark -

This rocking stone, which, from its extraordinary position, evidently appears not only to have been the work of art, but to have been placed with great ingenuity; the two upper stones (a and b) have been shaped to fit exactly with the two upright stones (c and d) on which they rest; and so artfully contrived, that the lower stone (b) moves with the upper stone (a). It measures about 26 feet in circumference.
That this is a Druidical monument formed by art, cannot, I think, be denied; we are assured that the Druids were well skilled in the art of magic, by which the superstitious Britons were led implicitly to believe in the miracles performed by these rocking stones.

And he goes on to mention the nearby Turning Stone -

It stands on the edge of a hill on Ashover common; height nine feet. It was a very ancient practice among the Britons to make three turns round their sacred rocks and fires, according to the course of the sun. Martin, in his account of the Western isles, says, "that in the Isle of Barry there is one stone about seven feet high, and when the inhabitants come near it, they take a religious turn round according to the ancient Druid custom." Hence there is great reason to suppose, that the above-mentioned stone was a rock idol to whom the Druids offered up their devotional rites.

Now the book he is referencing is A Description of the Western Islands of Scotland by Martin Martin, which was first published in 1703. Now this volume detailing the life, culture and traditions of the Scottish isles was a huge success, inspiring many similar works, and remaining constantly in print for a century after it first hit the shelves, with a raft of special editions and reprints following. Given the huge impact Martin's tome had upon the study of ancient history and folklore, I rather suspect his writings are the origin of much speculation about Druids and standing stones over the years. 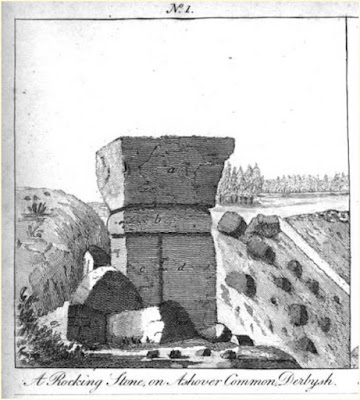 However the striking thing here I think is Martin's phrase "a religious turn" to describe the rite of walking around the stone. Rooke makes the connection with Martin's account and the name Turning Stone, and you can see how deeply Martin's writing had influenced antiquarian thinking in Rooke's day. Now modern scholars would be very wary of taking a report of one local custom and seeing it as a relic of a Druidic ritual once practiced nationwide, as we now appreciate how localised such lore often is. However back when the study of ancient history and folklore was young, such over-elaborations and far-reaching generalisations were more commonplace, as they were working from an assumption that there was a nationwide culture.

Whether or not the Isle of Barry ritual detailed by Martin was an authentic survival of a Druid rite doesn't really matter in reference to the origins of rotating stone stories. But the huge influence of his book is I suspect another matter, in particular the way his writings influenced our view of ancient Druidic and Celtic cultures. And given the phenomenal print runs of this book, I can't help but wonder if the common folkloric tale of a standing stone turning itself at a certain time or on a certain day of the year actually originates from Martin, with the notion that ancient Druids taking "a religious turn" around the local standing stone becoming quickly corrupted in oral retellings as the stone itself doing the turning. This would at least account for the fuzziness over which days of the year the Turning Stone and Cuckoo Stone are supposed to do their tricks.

However I suspect there may be another factor at play here than merely just a historical case of Chinese Whispers. For there is another similarly widespread tradition of stories about standing stones which perhaps provided the fertile ground for the turning misconception to take root in. And that is the legions of stories about stones that walk, which we will explore in the next Folklore on Friday. 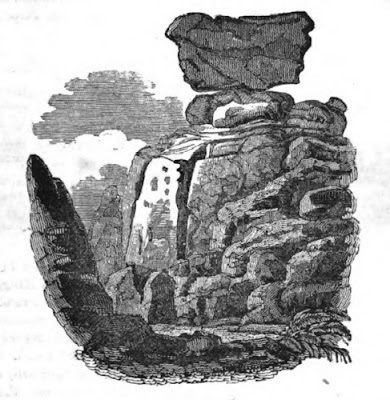 The Turning Stone - an illustration from Rooke

I'm getting right into this stones business. I'm suddenly inspired to traverse the holy quartet of bunnet, shelterstone, crocodile and Balbirnie stone circle by velocipede.
Stonehugger.

In Fairfield County, SC, a geological oddity has been known historically since the mid 1700s when Thomas Woodward the Regulator built his second home place near the Anvil Rock. During the winter months of 1780-81 British forces were encamped in Winnsboro with Lord Cornwallis, and, as troops made forays in the surrounding countryside for provisions, Woodward's Anvil Rock home of was often mentioned as a roadside marker. For pictures and more, go to https://www.strangecarolinas.com/2020/05/anvil-rock-winnsboro-sc.html
In the 1890s, a then controversial congregation of Latter Day Saints had come to Fairfield County and settled around Centerville near Ridgeway. An early Mormon leader, Bishop David Branham, was said to have preached from the top of the large rock to try to recruit members from the nearby communities.
When I was a child, there was an old tale that the huge rock would turn around on its axis if it heard a rooster crow three times or heard the honk of an automobile horn. My father delighted in pulling off the road and laying hard on the horn to awaken the ancient spirits of the rock for us gullible children. When we were disappointed that the rock did not respond, Daddy always pointed out that perhaps this time the rock had just not heard the horn!
Other citizens were told this story as children, but as this article pointed to the Old World origins of this story, I am convinced that the SCots-Irish and English early settlers in the area were responsible for passing this on for generations.