Welcome once again guys and ghouls to the tat-infested realm of terrors that is the Tomb of the Trumps! And blimey! It don't half whiff in 'ere this week! Now just where is that stench coming from? Hold on folks, I think we've found our cadaverous culprit... 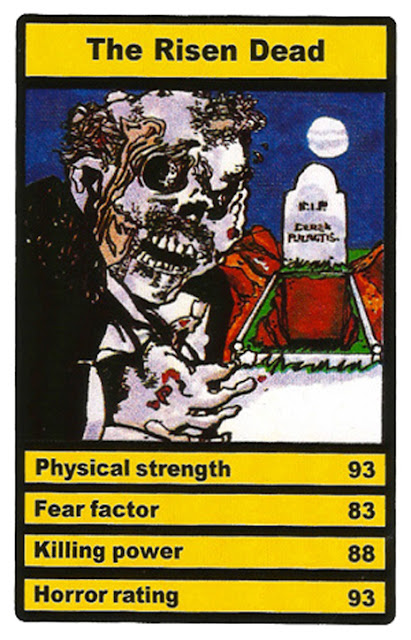 Of course you can't have a horror themed card game without a zombie or two, but the question is: which cinematic grave did this chap crawl out of? Now some horror trumpologists have suggested this fellow - the iconic cover star of this Lucio Fulci gut-munching classic 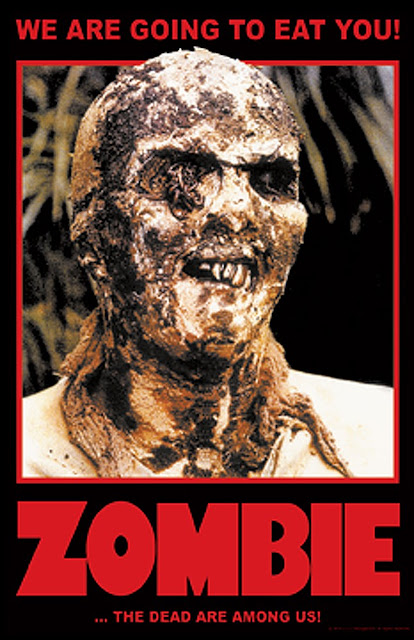 Now there is a certain resemblance but I'm not sure it's close enough. Plus there is a small problem of chronology, Zombi II aka Zombie (in the US) and Zombie Flesh-Eaters (in the UK) wasn't released until September 1979 in its native Italy, and somewhat later in other territories, and the Horror Top Trumps were release in 1978... So then back to the cemetery to dig again...

Another contender is this classic screen revenant - Mr Grimesdyke from Tales from the Crypt (1972) an anthology horror from Amicus based on the infamous EC horror comics from the 1950s. 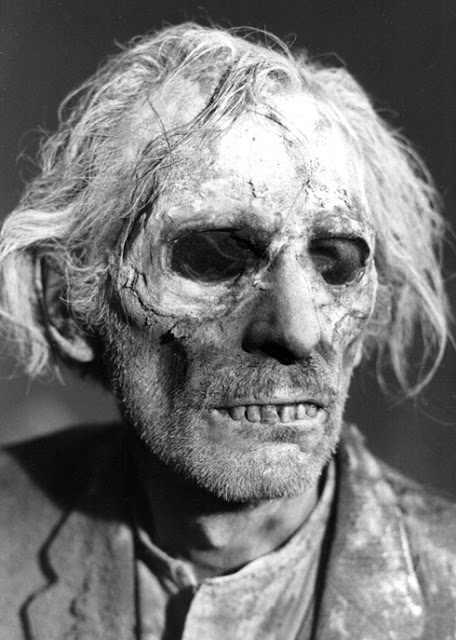 Based on the tale Poetic Justice from the Haunt of Fear #12, the cinematic version sees the great Peter Cushing returning from the grave to wreak revenge on those who drove him to his death. However as wonderful as this decayed horror is - a brilliant make-up by Roy Ashton - although there are some similarities I'm not sure it's the model for The Risen Dead. 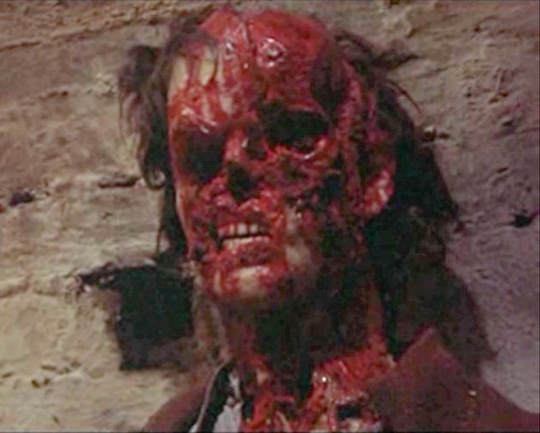 However once again, while there are some similarities I don't think it's quite close enough! Indeed in general I think this one is not quite skeletal enough. So then, while there is not a shortage of corpses and walking dead with empty eye sockets, I can't seem to find one that matches well enough, for all our contenders are missing the distinctive clawed hand posture and decayed funeral suit. It looks like the secret of this card has been well and truly taken to the grave!

So then on to our next card! By the pricking in my thumbs something bony (and lot easier to identify) this way comes! 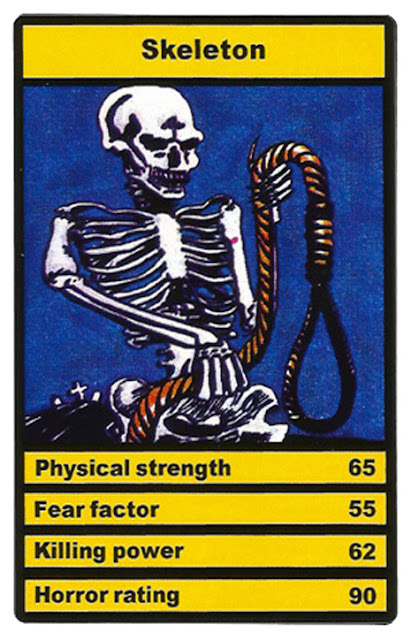 At first you may think that this card would prove to be a tough nut to crack, for in the world of horror imagery there's nothing more generic than a good old-fashioned skellington! However this rattling hangman quite clearly has an obvious origin - for once again, our Unknown Artist has been leafing through old Vincent Price movie posters! 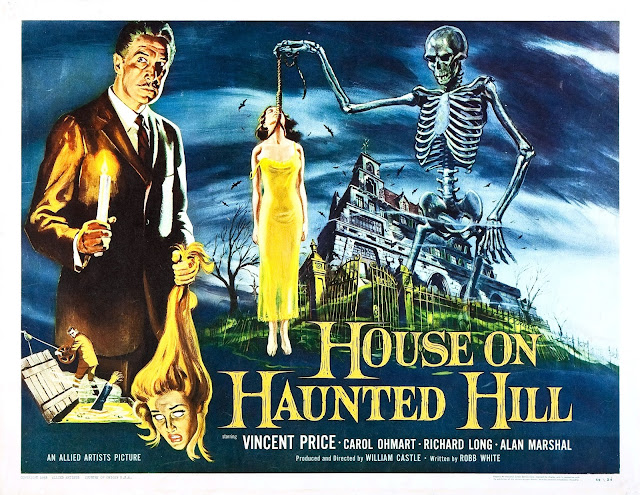 Yes, although the poster is a little different - the stance is a little too widescreen for the dimensions of the old Horror Top trumps cards - this is clearly the same bony gent. And while the rendering of the ribs is certainly a bit shaky, it is very obviously modelled on the anatomy on show in the poster above, with the shading and expression on the skull showing a near perfect match.

And old Mr Bones did actually appear in the movie too! Indeed House on the Haunted Hill was the second movie made by legendary director William Castle and featured one of his famous publicity gimmicks. For Castle, as well as being an inventive director, was a highly creative showman and came up with a variety of stunts and features to market his movies. Hence when House on the Haunted Hill hit the screens in 1959, Castle's publicity claimed the movie was filmed in "Emergo"! What this actually meant was that when the skellington appears in the finale of the movie, a matching puppet with light-up red eyes would be hoisted out over the audience, hopefully giving the illusion it that emerged from the screen. How well this worked is hard to say, but contemporary reports suggest that the skellington puppet did prove to be a popular target for popcorn boxes!

And so that rounds off another visit to the realm of old horror tat... But hold on, what's that?!? Look again at the Risen Dead card! On the tombstone in the background is a name - and as far as I can make out our Unknown Artist hasn't taken the usual route of sticking on a famous name as a jokey homage. However I can't help wondering if this is actually a secret signature! And this background grave reveals the Unknown Artist's real name!

I'm fairly sure the first name is 'Derek' but the surname is a bit tricky to make out... Could this be the long-sought clue to the creator of the cards?

I had never noticed the name on the grave before. Funny how you can fail to notice it when its been in front of you all these years. Looking but not seeing as they say. I really must take a fresh look at each card again, there are probably other little details that have been part of the wallpaper for so long that I've never looked at them objectively. The fact the zombie appears to be gesturing to the grave lends credence to Mr Moon's theory.
I would be grateful I anyone could tell me the importance or meaning of the name "Charles Hamm" that appears on the grave on the poster of "City Of The Living Dead"(1980). Is it an in-joke, guy that drew the poster or Lovecraft reference or something else entirely?
ST.CLAIRE

As far as I know, the only Charles Hamm I can find is this fella - a composer and musicologist! https://en.wikipedia.org/wiki/Charles_Hamm

However appropriately enough I did find another Charles Hamm who hit the headlines last year - a tattooist who will preserved the ink of dead relatives and friends! http://www.mirror.co.uk/news/weird-news/tattoo-artist-cut-out-frame-6466903

Cheers Jim, that's quite ghastly. I doubt flaying dead relatives will catch on, it is rather niche. My half arsed search for Charles Hamm continues..
Great article by the way, your knowledge of the cards is profound. Makes my Wednesday EVERY Wednesday.
ST.CLAIRE

I'm almost certain I've seen Charles Hamm on another gravestone besides the familiar poster art of the above mention film. More comic/ mag art style if memory serves. Although it might be The Aurum. Ive often thought the Mario Bava pseudonym John M Old would be quite fitting for such a grave.
Interesting that Mr Moon favours the 1978 release date for the cards. I was 4 at the time so it's possible they passed me by. I'm pretty sure it was '82 when I got my hands on a pack, although I had several other car/plane/dinosaur packs by then.

I always wondered if the name on the grave stone of The Risen Dead might have been the Mysterious Unknown Artist trying to sneak his name in somehow. Can't read it, though - Derek something?

The Risen Dead himself might be from War of the Colossal Beast.