Welcome dear fiends once again to the haunted chamber of tat that is Tomb of the Trumps! However this week for a change, we actually have some quality finds in our lurid art autopsies! And we kick off with a name that surely needs no introduction! 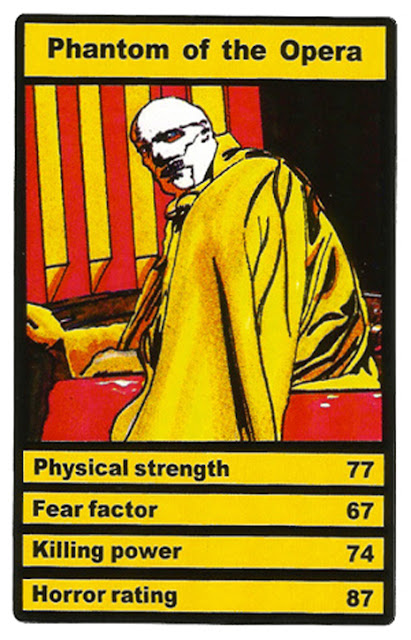 Now the Phantom of the Opera has already made a couple of appearances in this series before, courtesy of the great Lon Chaney Snr. For his marvellous depictions of the disfigured Erik have already been ripped off, I mean, inspired a couple of early cards, The Hangman and the Lord of Death.

However I'm sure it will come as absolutely no surprise that by the time we actually get to the old Phantom himself at last, in true Horror Trumps fashion,  the image gracing the card isn't him at all! For while this fellow at an organ certainly looks the part, he doesn't hail from any version of Gaston Leroux's classic horror tale. No, it's an entirely different well-loved horror icon, the abominable Dr. Phibes! 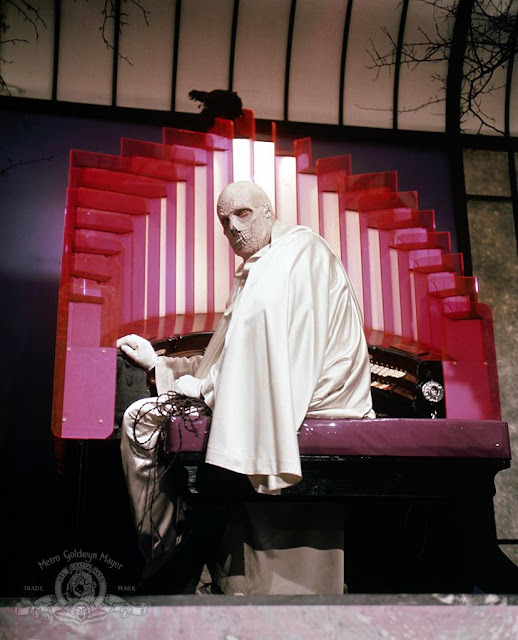 Now in fairness, the legendary Phibes does owe something of a debt to the Phantom - for like Erik, he is a musical, genius, loves playing the organ, and the first movie features a starling unmasking scene where his disfigured skull-like visage is revealed. And what's more both are a dab hand at creating memorable set-piece deaths for their victims.

Played by the great Vincent Price, the not-so-good Doctor wreaked havoc in two cult movies directed by Robert Fuest. The Abominable Dr. Phibes (1971) saw the undying genius taking revenge on the surgical team that failed to save his wife by recreated the Biblical plagues of Egypt, while the sequel Dr. Phibes Rises Again (1972) saw him devising similarly ornate deaths for all those standing between him and the fabled Waters of Life.

Now I am a huge fan of these movies, and for more information on this celebrated duology and the possible sequels that never materialised, tune into these pair of episodes from my podcast - I thank you!

So then, onto our next exhibit! And rather appropriately this too is another cult classic getting a spurious new title in the Trumps-land! 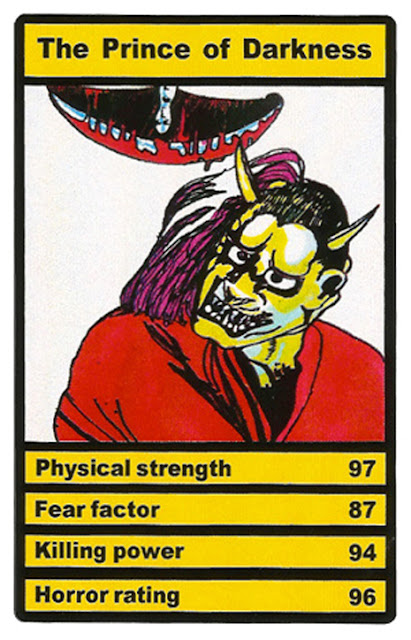 Now then, while you may be forgiven for thinking that this card was inspired by demoniac imagery from some medieval horrors, in fact this Satanic chap isn't in fact even a gentlemen! Actually this card is derived from a famous still from a classic Japanese film - Onibaba (1964) 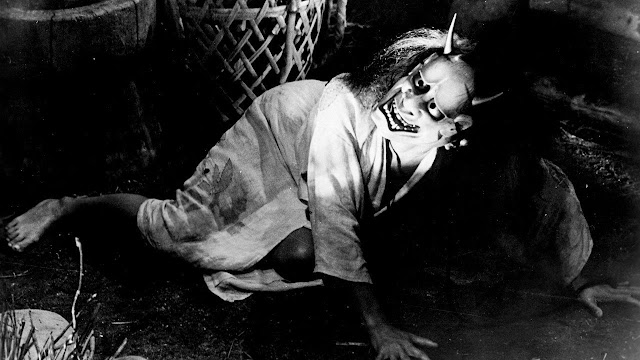 Onibaba, which literally means "Demon Hag", was written and directed by Kaneto Shindo and was inspired by a Shin Buddhist parable. Critics are seemingly unsure as whether this movie should be classed as a period drama or a horror movie, but it is widely agreed to be a classic. Set in the 14th century, the story tells of two women, one older and one younger, who kill passing warriors and samurai and sell their armour and weapons for profit. However this set-up get more complicated when they team up with a soldier Hachi, and then things go badly awry when the older woman acquires a demon mask from one of her victims...

However for some bonus points, that's not the only rip-off in this card. Yes, that bloodied blade at the top has been borrowed too - for if you look closely you can see that it is the titular device in  this poster! 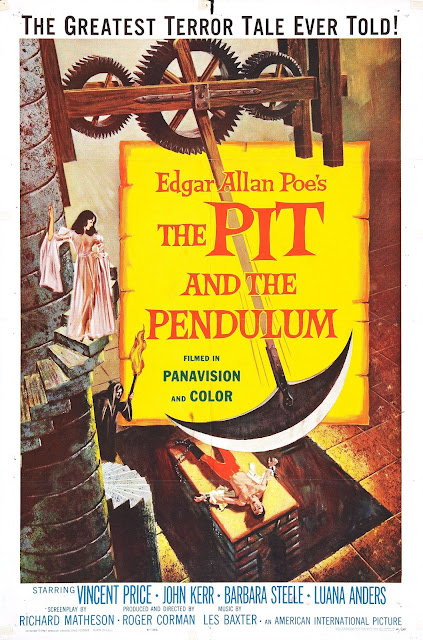 Based  - very loosely  I might add - on the Edgar Allen Poe tale of the same name, The Pit and The Pendulum (1961) was actually the second of a series of movies inspired by Poe which were helmed by Roger Corman. They nearly all starred the great Vincent Price, and several, like this one, boasted a script by the great Richard Matheson too. A first class horror pedigree I'm sure you agree for a humble blood-splattered blade!

Next time, there's a distinct touch of the grave to the next two cards we will be excavating here...

I'm a bit of a Robert Fuest enthusiast: The Abominable Dr Phibes is a fine film but I consider And Soon the Darkness (1970) his best. It's hard to believe he also directed The Devils Rain (1975) - presumably over the phone...

That reminds me of a comment the late Christopher Lee made about Pete Walker's tepid direction of "House Of Long Shadows"(1983). When asked how Walker directed the film, Lee answered "He didn't".
I think The Prince Of Darkness was one of the first cards (apart from the likes of Dracula, Frankenstein etc) i realised was copied from a still, having seen the Onibaba still in an old black and white horror book (possibly The Aurum).
ST.CLAIRE

Ahh, the Aurum. It sustained my enthusiasm for many years after Carlos Clarens kicked it off with his An Illustrated History of the Horror Film (1968 paperback edition). I got that book in about 1981 and Horror Top Trumps followed soon after. And an honourable mention to the old lady in the local newsagent who was happy to sell Fangoria to an 8 year old. Great days.

I'm revealing my credentials as as a second generation fan now, but the formation of my horror interest was sparked by these cards and a new (at the time)toy line called 'Monster In My Pocket" many of the images for which were "inspired" by classic horror stills in the same way the trumps were. I also had a copy of "Curse Of The Mummy's Tomb"(1964) bought from Woolworths that I still watch regularly. An under appreciated Hammer that should rank just below Plague and Reptile as the best of the ouevre that doesn't feature the Titans Of Terror. Or Andrew Keir. Or John Carson.i think Terence Morgan got the role because John Carson was having his sideburns refitted.
ST.CLAIRE