Welcome dear fiends to the strange and lurid world of Tomb of the Trumps! Once again we are hunting through cinematic tombs and exploring pop culture necropoli to discover the source of the frequently demented images that comprise the infamous original Horror Top Trumps! And we kick off this excursion into the weird depths with an encounter with a fellow who is something of a repeat offender in these explorations... 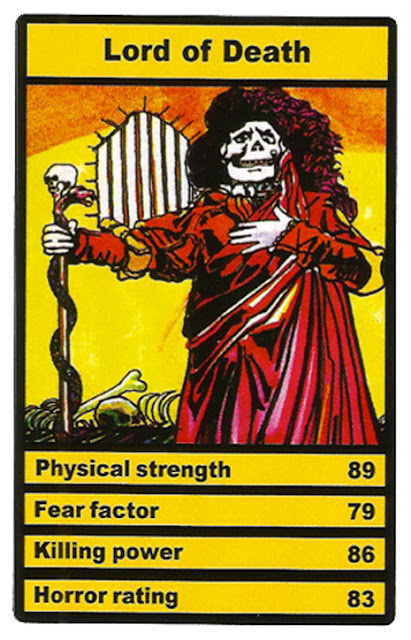 Now then, in a bizarre twist of fate, this card very nearly has a title that matches the image! I know, shocking isn't it! Anyhow, this ghoulish dandy presented above is a representation of The Red Death from Edgar Allen Poe's classic terror tale. To be more precise, this is actually our old friend Lon Chaney Snr. yet again, and what's more this Red Death, like The Hangman from a few weeks ago, is also taken from his classic silent version of The Phantom of the Opera too. For in that seminal silent movie, the hideous Erik attends a masque ball at the opera and comes dressed as Poe's personification of death, decay and disease... 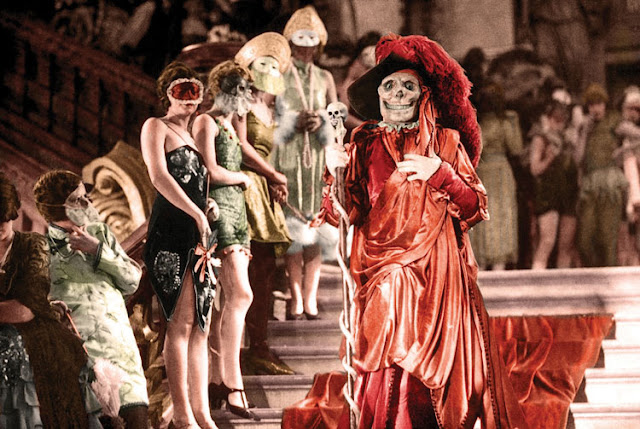 Once again Chaney, who the press of the day rightly dubbed the man of a thousand faces, created his own startling make-up for this scene. And a similarly startling make-up is the origin of the image that inspired our next card too! 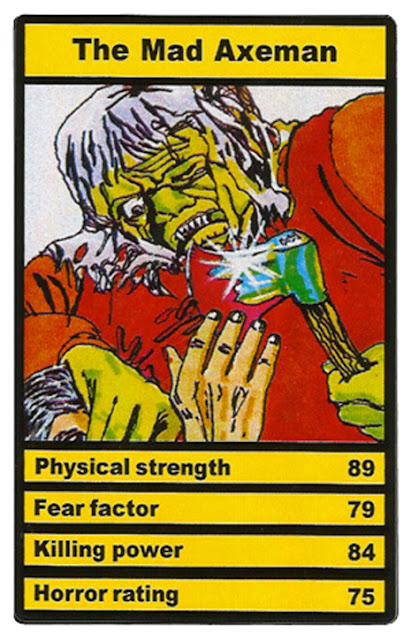 Now then folks, this one very nearly eluded me entirely! For the look of the Mad Axeman you could easily be forgiven for thinking that perhaps this was taken from some old demented comic featuring Frankenstein's monster! Indeed that top 'eavy 'ead and scrunched-up fizzog put me in mind of the long running version of Frankenstein's Monster created by writer and artist Dick Briefer that appeared in Prize comics in the 1940s! 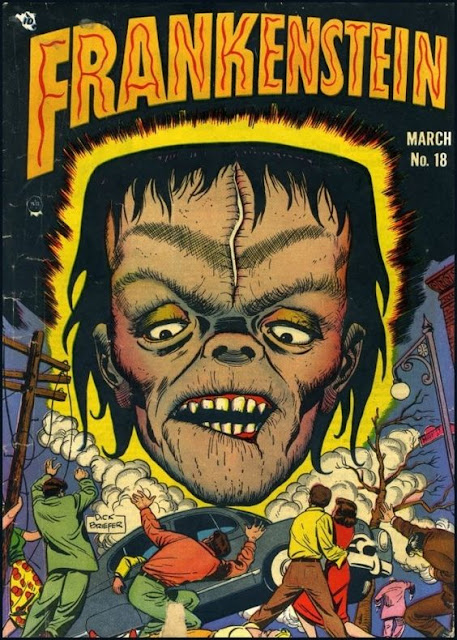 Alternatively you might be thinking that this card may possibly be the result of our Unknown Artist squashing up a still from a Universal Frankenstein flick - after all,  the Mad Axeman's garb does looks a little bit like the snazzy fleecy jerkin sported by the Monster in Son of Frankenstein (1939).  However, as it turns out, this card is nothing to do with Frankenstein in any incarnation at all!

Purely by chance I was revisiting an old Robert Fuest flick. Now Fuest was of course responsible for the two classic Dr Phibes movies, and in the last year I'd also revisited two of his other cinematic outings And Soon the Darkness (1970) and The Final Programme (1973) for my podcast (see here and here respectively). Hence I thought I might as well revisit  another of his movies from that era, 1975's The Devil's Rain, a Satanic biker flick that features not only a young John Travolta and William Shatner, but Ernest Borgnine as the Devil! Now if that cast isn't notable enough, the movie features a climax where Mr Borgnine is transformed into a hell-goat and the whole gang of Satan worshippers are melted by supernatural acid rain!

And it was in that memorably finale where all and sundry liquefy in a quite glorious splatastic fashion, I suddenly leapt up shouting "Mad Axeman!" For behold! Lose the horns and here he is! 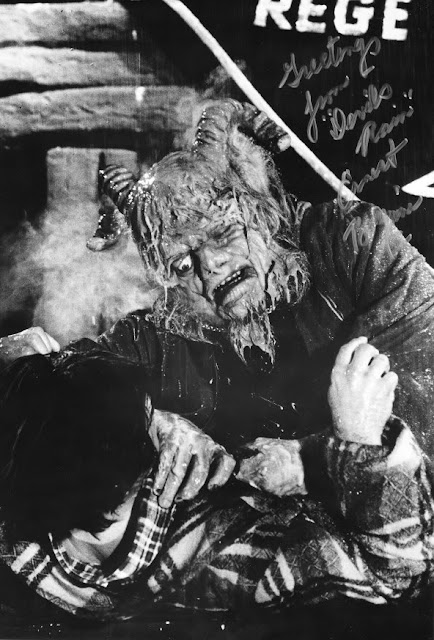 And there we have it - Ernest Borgnine as a melting goat-man! You'll never see Airwolf in the same light ever again now!

Next time we meet another two gentlemen who come bearing the epithet 'mad', but there'll be no liquefying goats I promise!

I made several attempts to watch The Devils Rain in its entirety last year. I failed. Despite a very promising opening 15 mins it soon descends into woeful chaos. Hence, I never discovered the connection. I might pour myself a stiff dram and have another attempt tonight in honour of The Mad Axeman...

Despite considerable assistance by some decent malt, I've only managed to worry the opening 15 minutes 6 or 7 times. They may have changed directors around this point and the replacement may not have seen Bad Day at Black Rock (1955). Anyway, its all downhill from here.

I've never seen The Devils Rain, and most likely won't now, thanks to you sacrifice friend. Drinking isn't the answer to shit films though.
I should know, sir.. I used to have to take a good swally just to get through Rawhead Rex. Two viewings a week bookended by gargantuan drinking sessions. My fucked liver eventually left to seek work with Lucio Fulci, appearing as a shrivelled zombies face in The Beyond.
ST.CLAIRE