GREAT GHOSTS OF THE SHELVES #21 - The October Country 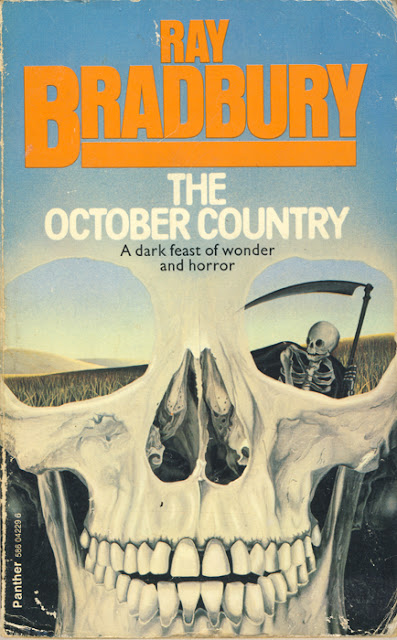 When I was young, I had a huge appetite for anthologies of weird fiction, largely spawned by my encounters with previously discussed volumes such as Deadly Nightshade, Ghostly Gallery and Ghosts, Spooks & Spectres. After ploughing through a great many short stories collections, I began to assemble a mental list of authors, writers that I knew always delivered a cracking tale. And if I saw an anthology in a library or bookshop that had a  tale by one of "The List" which I hadn't read or didn't already own, said book instantly was borrowed from the library/bought if I had the pocket money to spare.

Now one of the oldest names on "The List" was Ray Bradbury, whose classic story The October Game in Deadly Nightshade made an unforgettable impression upon me, and if you've ever read that very dark and masterfully told tale you will know exactly what I mean. And as one of the top names on "The List", I was naturally mad keen to my little mitts on anything by Bradbury. The first book of his that I owned was a battered Corgi paperback edition of The Illustrated Man, which naturally I adored, but I was keen to track down some collections of his more horror-orientated tales.

I'd gleaned from somewhere, probably a bio blurb, that the collection I wanted was Dark Carnival, which by all accounts featured some of his most famous horror tales. I would later discover that this was his very first book, and also published first by the legendary Arkham House. However I also learned very quickly that it was wasn't readily available in his country, and it was even in the late 1970s already changing hands for well beyond pocket money prices. But fortunately, I also soon discovered that through a long and tangled publication history, that I will outline another day, a good two thirds of the tales in Dark Carnival had later been reprinted in another Bradbury collection entitled The October Country.

And this particular book had  been split into two volumes for the UK paperback market, with one half appearing as the edition that you can see pictured above and the other as another paperback entitled The Small Assassin. Now I luckily discovered this just as I had some birthday money to spend, however less fortunately, it would only stretch to one book. So which did I choose? Well, obviously the one with the grinning skull and what looked like a Grim Reaper on it! Seriously though, despite the considerable allure of that bony visage on the cover, the very title just appealed to me... The October Country... a promise of place where the leaves are always turning, the scent of bonfires haunts the air, and Halloween is always near.

The full line-up of tales in my edition was -

The Dwarf
The Watchful Poker Chip of H.Matisse
Skeleton
The Jar
The Traveler
The Emissary
Touched with Fire
The Scythe
Uncle Einar
The Wind
There Was an Old Woman
Homecoming
The Wonderful Death of Dudley Stone

Now if you are familiar with all or just some of the tales from Dark Carnival or the original version of The October Country - for many have been reprinted elsewhere over the years - I think you'll agree the most horrific of them actually ended up in The Small Assassin. Now that's not to say that there aren't some fine horror stories in this collection - real skin freezers like Skeleton or The Emissary - but there are also plenty of eerie fantasies too, haunting tales that touch the heart or make you smile, making this selection the lighter half of the stories on the whole. However despite that, this book certainly did not disappoint my younger self, and The October Country was somewhere I'd revisit time and time again.

Admittedly there were a couple of stories that would take time to grow on me - The Watchful Poker Chip of H.Matisse I'm looking at you - but on the whole, I fell in love with these stories right from the first reading. Just as his SF was always about more than just silver rockets and strange planets, so too in these weird tales: the darkness Bradbury is exploring is our own inner spaces, breaking the boundaries of our usual thinking, and mapping the chambers of the human heart. Hence even when Bradbury takes us to the more whimsical regions of his autumnal lands, there is still a real weight to the tales, delivering stories that resonate in the mind and capture the imagination just as powerfully as as the pure horrors found in the likes of The Jar.

The lighter tales in this collection also acknowledge the romance and appeal of the horror genre. As a life-long lover of Halloween, Bradbury's October Country reflects the fun as well as the frights of the dark season. And nowhere is this seen more clearly in the loose trilogy of tales concerning the Elliot Family. In The Traveler, Uncle Einar and Homecoming we are introduced to a strange clan of folks who dwell on the dark side, and possess many strange talents or shapes. In many ways, Bradbury's family are the forerunners of similar but more well-known macabre enclaves, the Addams Family and The Munsters. But while those two more famous families were played just for laughs, Bradbury's tales are far more profound, exploring a secret world that where the darkness has been embraced, where horror is celebrated as a virtue, and being monstrous is the norm. The Elliot Family tales are tremendous fun, but they also have a great deal to say about our own attractions to the horror genre, that blurred line where having fun is being frightened, and where we get to swap places with the monsters for a while.

Now around this time of the year, the web fills up with features and articles recommending spooky tales for the Halloween season, and you can discover a great many classic chillers perusing them. However, if you want a collection of tales that are as beautiful as they are chilling, as lyrical as they are horrific, and one that imaginatively explores our relationship with the darkness, then book a ticket to travel to The October Country. And if you do, you may well find, that like myself, you'll be revisiting these tales this time every year...