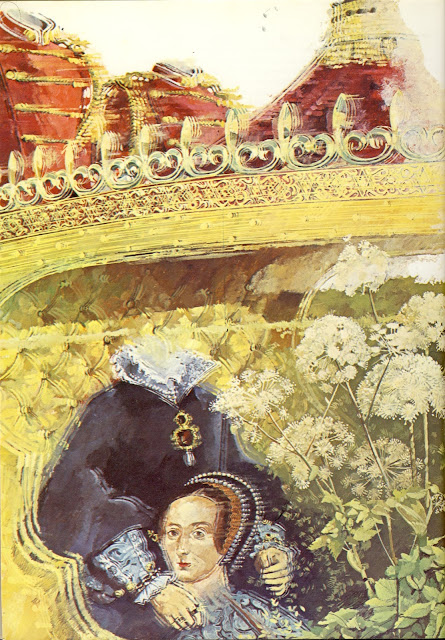 As we discussed last week, the quintessential headless ghost is Henry VIII's famously ill-fated wife Anne Boleyn. She is perhaps the most famous ghost in England, and certainly one of the hardest working phantoms in the British Isles. For while ghosts usually only haunt the places of their death, according to legend, Anne haunts a whole range of different locations. So then taking a leave from this well-traveled ghost's own book, let's take a tour of the places where the shade of Anne Boleyn is said to walk! 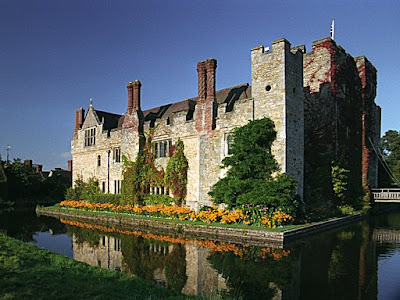 Original built in 1270 as a walled bailey with a moat, Hever Castle gained extensive additions and renovations in Tudor times, when one Henry Bullen, a wealthy merchant, bought it to be his dwelling. Henry's son, Thomas changed the family name to Boleyn and married into the nobility, wedding Elizabeth Howard, the daughter of the Duke of Norfolk. The couple had several children, one of which was - as no doubt you've guessed - Anne Boleyn. While historians are not sure if Anne was actually born in the castle, she certainly grew up there. And it was here that she first met her future husband, Henry VIII.

And according to local lore, Anne's ghost haunts her childhood home. She is reportedly seen wandering through the gardens, on a bridge that crossed the River Eden and beneath an old oak tree where according to legend the lusty king first courted her affections. In the manner of ghost stories in folklore, it is said her haunting is tied to a particular night of the year - with the tradition holding that she usually appears on Christmas Eve to walk her old home. 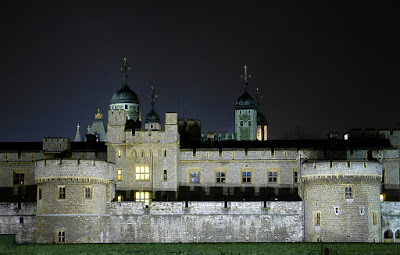 THE TOWER OF LONDON

Naturally Anne's ghost is reputed to haunt her as it was where she was executed in 1536. And there are many stories of encounters with her restless spirit. A guard in 1816 allegedly died of a heart attack after encountering her spirit on a stairwell, and there are other reports of her appearing in a ghostly  procession in the Chapel Royal. Over the years she has also been seen on Tower Green (the site of her execution), in The White Tower, in The Queen's House (where legend has it she stayed the night before her execution), and Chapel St Peter Vincula where her body is actually buried. Most famously, in 1836 a soldier on guard duty was approached by a white figure. Our plucky guard challenged the woman in white to identify herself but received no reply, and the figure continued to advance upon him. Our now terrified soldier jabbed the eerie spectre with his bayonet but to no avail and promptly fainted. His prone body was later discovered and he was charged with falling asleep on duty. However at his court martial trial several witnesses came forward to corroborate his tale, including a high ranking officer, who has seen the whole thing from a window! The officer attested that after the soldier had been shocked by the spirit, the shade carried on walking and vanished in a wall. 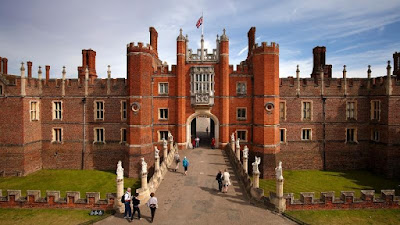 This royal palace was built by Cardinal Thomas Wolsey who gave it as a gift to his king Henry VIII in 1528. And Hampton Court was to become the playground of the Tudor monarchy and consequently witness to many historical events. Unsurprisingly perhaps, it is now home to a whole pantheon of Tudor ghosts, with Henry VIII himself walking its halls, his daughter Elizabeth I has also been seen, and several of his wives are haunting the place too: Jane Seymour reputedly haunts the Clock Court, while Catherine Howard runs screaming through what is now called the Haunted Gallery.

However not to be left out, Anne Boleyn has also been seen walking about the palace, reportedly wearing a blue or black dress. And how do folks know they have seen her shade and not the phantom of one of the other famous Tudor ladies? Well, Anne's shade often walks sans head! 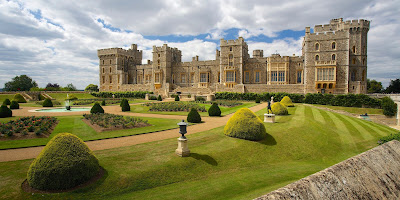 The royals of course have many homes, and as ghosts are often just reenacting what they did in life,  perhaps we should not be surprised that Anne chooses to haunt several of them. Windsor Castle was originally built by William the Conqueror and has been a home for the British royals ever since, making it one of the long occupied palaces in European history. Naturally such an old royal residence has a great many ghosts, and once again we find Anne Boleyn's shade making frequent return trips there. According to legend she is often seen gazing out of the window in the Dean's Cloister, while other tales hold that she can seen running screaming through the halls, often carrying her own severed head.

This manor house in Essex also makes the claim that Henry VIII courted Anne Boleyn here, with local tales alleging that it was here that the king first clapped eyes on the young Anne. Originally built in 1216, the hall passed into the hands of Sir Thomas Boleyn in 1515, and later he was made Viscount of Rochford in 1525. And it is thought that Anne Boleyn spent a good deal of her childhood here. According to legend, the manor contains a network of secret passages in which Henry and Anne would meet secretly - for remember Henry was at the time a married man!

Naturally having such a close association with Anne Boleyn, Rochford Hall has its own tales of hauntings. It was said that the walls and floor of the nursery ran red with ghostly blood on the day of her execution. And down the years, a ghostly figure of a women has been seen in various places. Local legend claims that twelve days after Christmas, a headless woman in white can be seen walking through the manor grounds... This stately home was originally built in 1320 by one Walter Woodlock but by the 1500s had become the home of the Seymour family. Indeed it was the home of Henry VIII's third wife Jane Seymour. Famously it was where he wooed her, and Henry was actually at Marwell Hall with Jane while Anne Boleyn was executed. Jane herself reportedly haunts her old home, as you would expect, but it is said said the phantom of Anne walks there too, in the Yew Walk, allegedly fuming and plotting revenge against Henry and Jane. 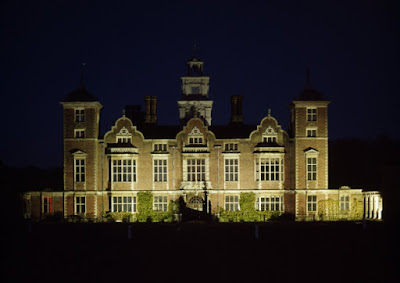 This manor in Norfolk was yet another home to the Boleyn family, the residence of Sir Thomas Boleyn from 1499 to 1505. Some historians have claimed that it is very likely that Anne herself was actually born here, and indeed the estate is home to a statue and portrait with the inscription "Anna Bolena hic nata 1507" ("Anne Boleyn was born here in 1507") - although it is now thought that Anne was actually born in 1501, while the house was still in Thomas Boleyn's residence.

Of course with such a strong connection to the Boleyns, Anne's shade is reputed to appear here too. However it is at Blickling Hall that she appears in the most spectacular fashion. Local legend says that on the night of May 19th, the anniversary of her execution, a phantom coach drawn by six headless horses and driven by an equally headless coachman pulls up outside Blickling Hall. Inside the coach in the spectre of Anne herself, carrying her head in her lap, who then leaves the coach and wanders the Hall until daybreak!


The final place Anne has been haunting for years is, bizarrely enough, our own homes. For in 1934, Bert Lee and RP Weston penned a song about her entitled "With Her Head Tucked Underneath Her Arm", which became an instant hit. It was recorded by Stanley Holloway in the same year and became a staple of radio and many a record collection. And it later became a hit for several other artists who covered the song ,including the Kingston Trio, the Barron Knights, the Clancy Brothers and Carol P Weiss. It was even featured in celebrated TV comedy Frasier, in the episode "Whine Club".  You can read the lyrics here

With some many places playing host to the ghost of Anne Boleyn, and indeed with a hit record commemorating her headless hauntings, she is perhaps the most famous ghost in history. And given her high ranking in the history of hauntings, it is perhaps unsurprising that we have the image of headless ghosts so firmly embedding in popular culture.