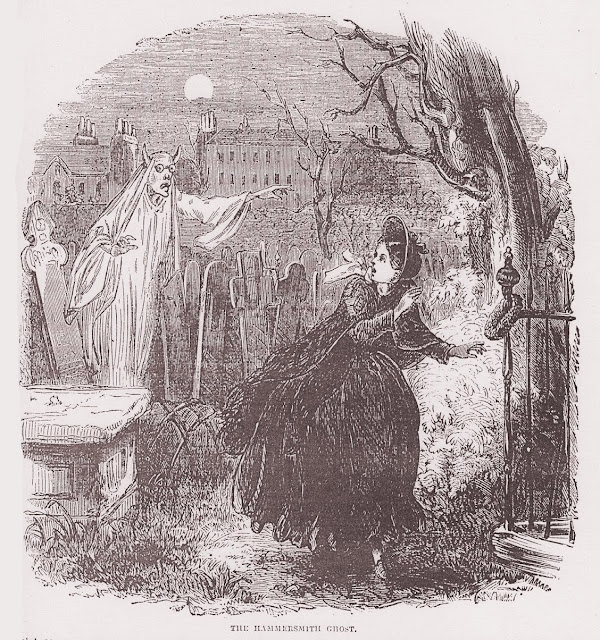 When we think of a great city such as London, we invariably imagine a place that never sleeps, where the metropolis revels merrily onward through the dim watches of the night. However back in the early 19th century, before the age of municipal street lighting and gas lamps, things were very different: when the sun had set, the city became a warren of dark streets and gloomy lanes,with many folks not venturing out farther than necessary. Aside from the numerous criminals who plied their trade after dark, many areas were allegedly home to a ghost or two and it is to one particular haunting that we are turning our attention to now...

It was once a well-known tale, and some folklorists and historians see it as a precedent for later public panics that would strike London, in particular the reigns of terror that the likes of Spring-heeled Jack and Jack the Ripper would bring to the city much later in that century. However while the story of the Hammersmith ghosts are now largely forgotten, the case has had a surprisingly long lasting impact on British society.

In November 1803, stories began to circulate that a ghost was prowling the Hammersmith area after dark. The very first reports had surfaced in October, when several folks had seen a hag-like figure roaming the local churchyard. However this alleged phantom was soon recognised by a Mr Moody of Six Bells as a boy employed by a local butcher, a Mr. Kilberton. It was discovered that the lad had been stealing the dresses of a maid and prancing about the graveyard and thereabouts in order to frighten her. Needless to say these activities were soon put to sudden stop when Mr Moody identified him.

However as is often the way of these things, stories, even soundly debunked ones, have a tendency to linger in the public imagination. And not longer after other folks were reporting seeing a ghost - however this time it was not a mad old woman but a mysterious figure in white. A Mr Brazier, a chimney sweep, spotted a white shape in the lower end of Church-lane. However when prodding the spectre with his stick he discover it was actually a courting couple! But other reports were not so easily explained - a local brewer Thomas Groom was walking through the churchyard when he was grabbed around the throat from behind. Groom struggled with his attacker and managed to break free only to see a figure draped in what looked like a white shroud disappear among the tombstones. Groom was severely rattled by the assault and alerted the authorities. Naturally the newspapers seized upon his story, and with usual tabloid relish embellished the tale with the detail that Groom was so shocked  that he had taken to his bed and never recovered from the attack. 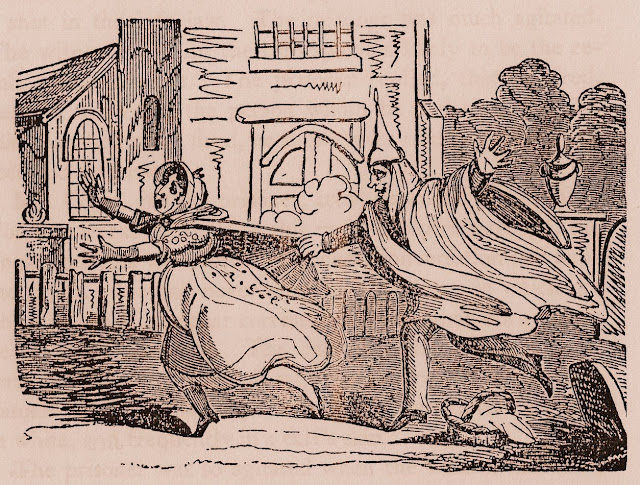 However despite such lurid accounts appearing in the press, the Hammersmith ghost had seemingly disappeared, with no further reports being made. But in the last few weeks of November, the sightings began again. Once again a menacing shape in white was seen, with witnesses describing a figure wrapped in a white sheet, with great round glassy eyes, and some even claimed the phantom had devilish horns. Several people were badly shocked by the eerie spectre, and no doubt embellished tales sprang up about the sightings - it was claimed a pregnant lady had been startled by the white figure and had died from shock several days later. Allegedly a wagon driver has been spooked by the spectre, and nearly lost control of the horses, placing his sixteen passengers in dire peril. Yet another account ran thus -

One poor woman in particular, when crossing near the churchyard about ten o'clock at night, beheld something, as she described, rise from the tombstones. The figure was very tall and very white. She attempted to run; but the ghost soon overtook her, and pressed her in his arms, when she fainted; in which situation she remained some hours, till discovered by some neighbours, who kindly led her home, when she took to her bed, from which, alas, she never rose

Who or what was this white robed figure? Many speculated that it was the shade of a local man who had committed suicide earlier in the year. Somewhat controversially he had been buried in the churchyard, much to the consternation of the older citizens of Hammersmith who still thought the old tradition that suicides should not be buried in consecrated ground ought to have been observed. The ghost, they said, was the suicide's spirit walking abroad, unable to find rest.

The sightings continued and something of a panic was brewing. Events came to a head at the close of December, when on the night of the 29th, William Girdle, the local nightwatchman spotted the spectre for himself. While on his rounds he was approached by the apprentice of a local shoemaker, a Mr Graham, shouting he had seen the ghost. Girdle hurried up the street and saw a figure in white by the water pump and gave chase. While our plucky nightwatchman lost his quarry in the maze of darkened lanes and houses, he was able to report he had seen the figure take off its white robes and stuff them under its coat. Furthermore the ghost had been seen by several more witnesses, including the Hill family who spotted a mystery man hiding from the nightwatchman behind their house and claimed to have seen a corner of white sheet poking from a corner of his jacket.

Word soon spread, and henceforth several local men began patrolling the streets too, for the white robed figure, be he man or spirit, was apparently corporeal enough to be captured! However things would come to a somewhat disastrous end on the night of January 3rd 1804. A local excise officer, Francis Smith offered to accompany Girdle on his rounds, and the pair even devised code phrases so that they might identify each other while searching for the ghost in the darkened streets and alleys. Around eleven o'clock in the gloom of Black-Lion Lane, while patrolling on his own, Smith spotted a figure in white. And when the white shape did not reply to his challenges, Smith opened fire and the figure collapsed to the floor. But like other instances in the Hammersmith haunting, it was soon discovered that this was another case of mistaken identity, and one with tragic consequences.

The "ghost" turned out to be a local plasterer, a man named Thomas Millwood, and Smith's shot had caught him in the lower jaw and shattered his spinal column. Realising his terrible error, Smith fetched a local man, one John Locke, to return to the scene, and there was joined by Girdle and Millwood's sister Anne. The unfortunate workman was taken to the Black Lion Inn and the local surgeon called. However Millwood was already dead, and the guilt-stricken Smith surrendered himself to the police. A week later his case was heard at the Old Bailey, in one of the most unusual trials in the history of that famous court of justice...

NEXT WEEK- the trial of the ghost killer, what became of the actual Hammersmith Phantom and its lasting legacy 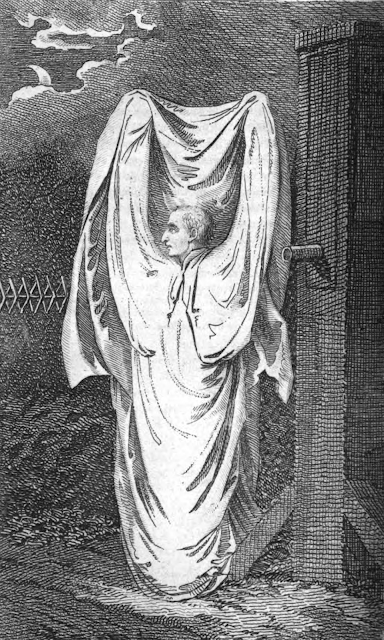