Last week in Great Ghosts of the Shelves, I reminisced about the wonderfully lurid Horror Top Trumps of the 1970s, and as promised we now start our epic journey uncovering the secret history of the packs. This entry #0 in the series details the basic important facts about the Horror range of Top Trumps, and provides a full rogue's gallery of both packs of cards.

In 1978 Dubreq launched the Horror Range of Top Trumps, and they were re-released in 1982 when Waddingtons acquired the rights to Top Trumps. Both packs consisted of 32 cards for game play, plus several additional cards - a title card whose reverse had the rules of the game printed on, another showing the title card of the other Horror Top trumps Pack, a Top Trumps reference card listing the other packs available (with handy tick boxes to keep track of your collection), and a Special Offer card.

Both packs came in clear plastic cases, and both packs of cards featured a vampire bat design on the reverse. In rarer editions of the packs released both by Dubreq and Waddingtons this beastie is printed in blue rather than black. The card stats for both packs were -

And the rules of the game were - 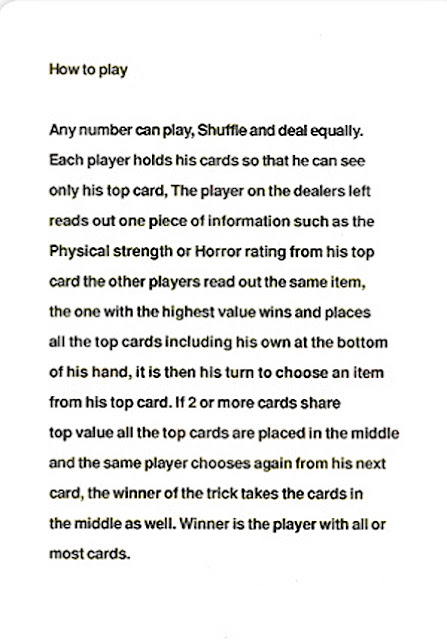 And the card listings for both packs are as follows - 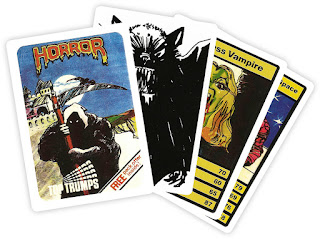 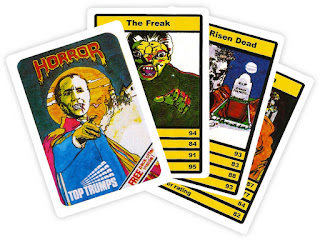 NEXT TIME on TOMBS OF THE TRUMPS, we begin our quest to discover where the art on these iconic cards was shameless ripped off from, I mean, *ahem* was inspired by!

Both of the Horror Top Trumps packs have been re-released as part of the retro collection by Winning Moves. Disappointingly, each pack consists of 30 cards rather than the original 32. The Dracula pack is missing Man Eating Plant and The Sorceress. The Devil Priest pack is missing Death and Martian Warrior. Not sure why... should please owners of the original packs though.

I bought several of those classic card packs from winning moves and they all had 30 cards. I used Winning moves contact page to ask why there are cards missing but so far I have been ignored.
As I remember it all the top trumps decks had 32 cards.
The Winning moves fantasy deck is missing the (rare) demon card, but I am not sure what else it is missing.
Have to say I was a bit disappointed to be missing the cards. And also to be ignored.

Also compared to the originals, the artwork is slightly cropped ie missing a little bit at the bottom - however in nearly all cases you'd hardly notice, but you do se the difference on the Maggot card where the victim's head is now missing his eyes.

So far there been no real explanation offered why the decks are missing cards :S

Yes. I had an argument with my son. He said man eating plant was missing . I said "no dont be daft"... but yes 2 cards missing... my 2 cents ..it could be the printing. Maybe they could only get rows of 10 on a sheet?
Last comment... why is the dracula pack far superior? Its like they were giving out 90+ on loads of cards... the freak physical strength 94??? Great to buy them again and show em to my kids.

I emailed Winning Moves about the missing cards and this is the response I received:

"I’ve been in touch with the Product Development Team and they have explained a few things about the retro packs.

Please allow me to pass on what they said:

‘’On their original release many years ago, they had 32 cards but due to manufacturing spec changes, the packs were trimmed down to 30 cards to fit the current machines & new case mouldings.
(All current packs of Top Trumps have a maximum of 30 cards).

The 2 cards previously mentioned, are now used for promotional giveaways and special prizes but these aren’t held in stock unfortunately.

With regards to the purpose of the new packs, they are an emulation, an update, a contemporary version of what previously existed, not a straight recreation of the original product.

They’re not really designed to be 100% replications for collectors, more of a vintage style, retro nod for consumers to enjoy, with some nostalgia.

For collectors who are looking for the ‘original product’ then searching places such as eBay would be the best way to find the items to add to their collection.’’

I hope this has helped to explain things a little more.
Sincere apologies for any confusion and we do hope that you enjoy the packs you have purchased.

Thank you for your custom.

Ah very interesting! I shall have to have a look for the said promos!

I know, I miss him and his sombrero!

I used to love this game as a kid but was very disappointed with the 2 cards missing out of each pack...especially Death. It feels like playing a game of snooker without the black ball

Just a few I spotted:

Fu Manchu is the Boris Karloff film of the same name