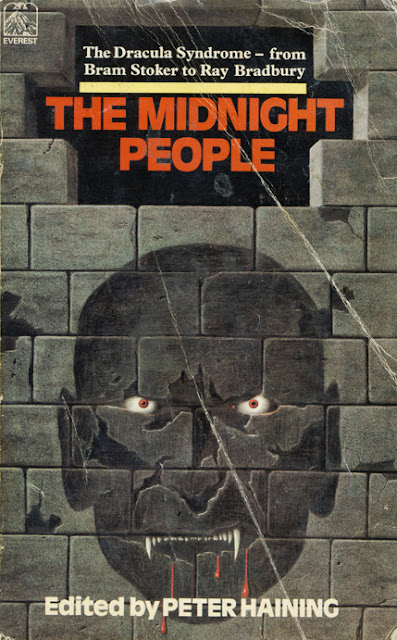 Another collection of vampire fiction! And one which oddly enough has a cover that seems to echo the cover of a contemporary paperback anthology also devoted to tales of the vampire, The Undead edited by James Dickie. And as the two volumes surprisingly one share on tale in common - When It Was Moonlight by Manly Wade Wellman - they made a very pleasing complimentary pair on my bookshelves.

Now The Midnight People was one of the many anthologies edited by the late great Peter Haining. First published in hardback by Leslie Frewlin in 1968, this collection of tales of blood drinkers has had several paperback editions down the years from Popular Library in 1970, Ensign in 1974, and the above incarnation from Everest Books in 1975. Furthermore it has been also published in the US as Vampires at Midnight in 1970 by Grosset & Dunlop, and more recently surfaced under the same title in 1993 from Warner Book with a new introduction by Sir Christopher Lee.

Now the indefatigable Haining often used to arrange his anthologies by theme, and this one was part of a series of collections, each tackling a different aspect of the macabre - so while The Midnight People dealt with vampires, The Evil People (1968) served up tales of black magic and witchcraft, and The Unspeakable People (1969) purported to bring together the most horrible tales ever written. And more on those tomes another day...

...But back to The Midnight People. Much like Mr Dickie's collection which came a few years later, in his introduction Haining explains that he endeavored to create a collection of vampire fiction that didn't overlap with other volumes. And for my money, I think he succeeded admirably, with only the extract from Dracula being  and the MR James tale 'An Episode of Cathedral History' being likely to being already known to most readers. In the present age, we could add the extract from Varney the Vampire but at the time this collection was published reprints of this seminal penny dreadful were few and far between. Additionally the passing years have revealed that it is likely that James Malcolm Rymer actually penned this Victorian vampire epic rather than Thomas Preskett Prest. And while on the subject of names and titles, "Stephen Grendon" was actually a pseudonym for August Derleth, while Matheson's tale 'Drink My Blood' has also appeared under the alternative title 'Blood Son'.

The full contents are as follows -

Fritz Haarmann ‘The Hanover Vampire’ by Montague Summers
The Vampire of Croglin Grange by Augustus Hare
The Vampyre by John Polidori
The Storm Visitor (an extract from Varney the Vampire) by Thomas Preskett Prest
Three Young Ladies (an extract from Dracula) by Bram Stoker
An Episode of Cathedral History by M. R. James
Bat’s Belfry by August Derleth
‘And No Bird Sings’ by E. F. Benson
The Believer by Sydney Horler
The Drifting Snow by Stephen Grendon
When It Was Moonlight by Manly Wade Wellman
Over the River by P. Schuyler Miller
Drink My Blood by Richard Matheson
Pillar of Fire by Ray Bradbury
Dr Porthos by Basil Copper
The Living Dead by Robert Bloch
The Girl with the Hungry Eyes by Fritz Leiber
Postcript by Montague Summers


This volume is bookend with pieces by the noted vampire scholar Montague Summers, and we open with his account of the ghoulish crimes of a real life 'vampire' killer. W then follow it up with another alleged true story - 'The Vampire of Croglin Grange'. Now oddly enough when I investigated the Croglin case, having being fascinated for many years by the account here, I discovered a strange link to Varney the Vampire, and more curious still, the every section reprinted under the title 'The Storm Visitor' in this volume! Full details of this investigation can be found in Hypnobobs  #91 and Hypnobobs #92.


Anyhow we then take a more or less chronological tour through vampire fiction through the ages. And refreshingly we have a wide variety of species of vampire on show here. Yes, there are the traditional blood-drinkers such as Dr Porthos, but we have plenty of unusual takes on the familiar fiend here. The Grendon/Derleth tale brings us a snow vampire, Bloch and Leiber explore in different ways the vampiric aspects of celebrity, Manly Wellman has the great Edgar Allan Poe meeting the undead, while Bradbury and Miller tell us tales from the vampire's point of view. And stranger things await too - there is little of the suave gentleman of the night, or even of the remotely human in EF Benson's 'And No Bird Sings', while some have questioned whether the thing unleashed in James' 'An Episode of Cathedral History' is actually a vampire at all - but whatever the creature is it certain fits in well here.


This book entranced me when I first got the hardback edition out of the library as a kid, and indeed I borrowed it several times to revisit its fine selection of tales. And while it was many years later that I saw a copy for sale, I was delighted to find it and bought it instantly. It is still a superlative selection of vampire tales and one can see why it has been reprinted so many times - essential reading for all lovers of the undead. 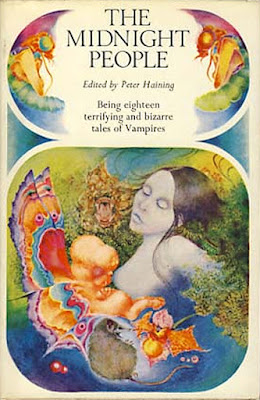