FOLKLORE ON FRIDAY - The Toad Stone 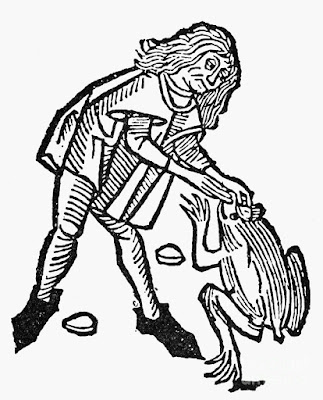 As we saw last week, toad bones were highly prized for their alleged unusual powers. However in ages past, despite their unfounded and undeserved reputation as being poisonous predators, toads were sought out for another bizarre but commonly believed reason, which William Shakespeare alluded to  in As You Like It.  In Act 2, Scene 1, the Bard of Avon has Duke Senior say:


Sweet the uses of adversity.
Which, like the toad, ugly and venomous,
Wears yet a precious jewel in his head


Yes, as strange as it sounds for several centuries a belief flourished which asserted that toad's heads contained a curious gem stone. Now aside from the monetary value of a jewel, these toadstones were also alleged to possess extremely useful properties. In the early encyclopedia, De Proprietatibus Rerum, written by the Franciscan scholar Bartholomaeus Anglicus in the 13th century, a toadstone was described as -

Now this might seem to be absolute nonsense to the modern reader, but in earlier ages, when medicine was primitive, and poisoning was a common method of assassination, it is easy to understand why the idea that certain gems could not only ease, but also detect poisons, would be very appealing. Naturally it wasn't long before there was a flourishing trade in toadstones, and by the 16th century these gems, allegedly taken from the heads of amphibians, were being set in jewelry, most commonly rings, and were highly prized items.

In later ages, their claimed magical properties shifted slightly. Presumably as the fear of being bumped off by poisoning receded, the toadstone became more generally known as a magical remedy, with  Thomas Lupton in his compendium of science and technology Thousand Notable Things, Of Sundry Sortes (1576) alleging that -

A Tode stone (called Crapandina) touching any part be venomed, hurte or stung by Ratte, Spider or Waspe, or any other venomous Beast, ceases the paine and swelling thereof

What's more, being a tome full of handy practical hints and guides for the learned Elizabethean gent, Lupton handily gives us a method of making our own -

A Goode way to get the stone called Crapandina, out of the Tode. Put a great or ouergrowne Tode, (fyrst brused in dyvers places) into an earthern potte, and put the same in an Antes hyllocke, & couer the same with earth, which Tode at length ye Antes wyll eate: So that the bones of the Tode and stone, wyll be left in the potte

As those of you who read last weeks article on toad bone amulets will recognize, clearly Mr Lupton (or his source) had read their Pliny. Various other writers and sages in later years would continue to recommend the "ante hyllock" method of extracting a toadstone, however obviously one expects there were many disappointed folks who found naught but ant-flensed bones when opening their "eathern pottes". And perhaps this is why seminal bestiary compiler Edward Topsell detailed an alternative and more arcane method in his 1608 work The Historie of Serpents -

There be many late Writers, which doe affirme that there is a precious stone in the head of a Toade, whose opinions (because they attribute much to the vertue of this stone) it is good to examine in this place, that so the Reader may be satisfied whether to hold it as a fable or as a true matter, exemplifying the powerfull working of Almightie God in nature, for there be many that weare these stones in Ringes, being verily perswaded that they keepe them from all manner of grypings and paines of the belly and the small guttes. But the Art (as they terme it) is in taking of it out, for they say it must be taken out of the head alive, before the Toad be dead, with a peece of cloth of the colour of red Skarlet, where-withall they [sc. the toads] are much delighted, so that they stretch out themselves as it were in sport upon that cloth, they cast out the stone of their head, but instantly they sup it up againe, unlesse it be taken from them through some secrete hole in the said cloth, whereby it falleth into a cestern or vessell of water, into which the Toade dareth not enter, by reason of the coldnes of the water. 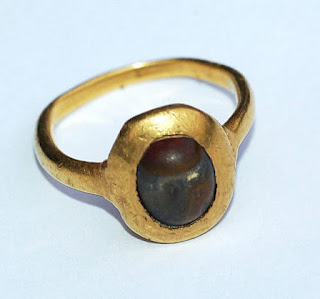 Very bizarre indeed I'm sure you'll agree! But no matter how strange and fruitless these methods of extracting the fabled stones from the toad's heads were, from the trade in toadstone jewelry quite clearly some one was managing to get them. However by the 17th century, some inquiring minds were begining to wonder quite where the toadstones were coming from. One such sharp fellow was Sir Thomas Browne, who in his 1646 work Pseudodoxia Epidemica, or Enquiries into Very many Received Tenets, and commonly Presumed Truths, wittily debunked many commonly held misconceptions and myths. In this work, he rigorously investigated the subject of toadstones, basically highlighting the anatomical and biological unfeasibility of such things existing before revealing his own conclusion on what they were, and even proposed a test for alleged toadstones -

But these Toadstones, at least very many thereof, which are esteemed among us, are at last found to be taken not out of Toads heads, but out of a Fishes mouth, being handsomely contrived out of the teeth of the Lupus Marinus, a Fish often taken in our Northern Seas, as was publickly declared by an eminent and Learned Physitian. But because men are unwilling to conceive so low of of their Toadstones which they so highly value, they may make some trial thereof by a candent or red hot Iron applied unto the hollow and unpolished part thereof, whereupon if they be true stones they will not be apt to burn or afford a burnt odour, which they may be apt to do, if contrived out of animal parts or the teeth of fishes.

The Lupus Marinus is of course Latin for Sea-wolf, the archaic name for a shark. However while Sir Thomas was on the right track, he hadn't quite found the origin of the toadstones, for indeed many of these alleged mystic stones would have passed his hot iron test. A later writer (whom we encountered while talking of another alleged magical item the Fairy Flag of Dunvegan),  Thomas Pennant came closer still in his epic work British Zoology (1766). Pennant wrote of the toadstone that -

all its fancied powers vanished on the discovery of its being nothing but the fossil Tooth of the Sea-Wolf, or some other flat-toothed Fish.

And hence as they were fossils, a toadstone could be subjected to Browne's test and not give off the tell-tale smells of burnt calcium and enamel which would signify a fake. However again, while Mr Pennant was close to the truth, he was just a shade away from getting to the bottom of this batrachian mystery. In fact, he was quite correct on all counts except identifying the exact species of  fossilised fish teeth.

Modern science has of course now given us the answer: toadstones were in fact the teeth from fossils of a species of Lepidotes which flourished in everyone's favourite ancient time zones - the Jurassic and Cretaceous periods, when dinosaurs ruled the earth. And looking at the stony remains of these primordial piscines' jaws, one can see why they were passed off as toadstones, for in their shape and colouring, they do resemble the wart, knobbly hide of monstrous toads.

Oh,how I covet that fabulous specimen in the photo above!