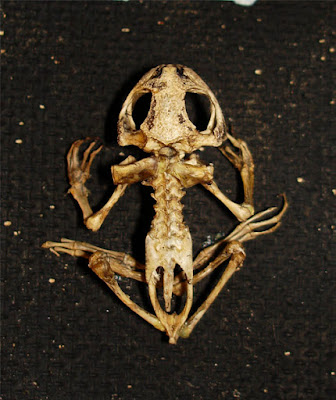 As we discovered a few weeks ago, in ages past there was a whole branch of early medicine (and I use that term loosely) based about using toads, in whole or in part, as a remedy for a wide variety of ailments. Many of these dubious cures were in that strange borderland where early pharmacy emerges into folk magic, with some cures being derived from pills, lotions and potions made from toads while others worked by the patient carrying a dead specimen or some parts thereof as an amulet or charm against catching certain diseases and maladies.

However, in a related set of folk beliefs, there is a long tradition of using toads for more purely magical purposes. As we have seen in previous articles, folk beliefs about the venomous nature of the creatures and assorted alleged familiar spirits appearing in the shape of toads, has resulting in the toad being associated with witchcraft and black magic, an idea that still persists today in the popular imagination. However the idea that toads possess magical properties stretches back further than the witch trials and medieval times, for like many widespread European superstitions, the origin of these beliefs can be traced back to Classical times.

Now the surviving writings of assorted Greek and Roman scholars formed the basis for Western philosophy, science and history for hundreds of years, unfortunately our ancient sages weren't always on the mark with their data and theories. For example, Pliny the Elder gave the world one of the first encyclopedias - the epic tome Naturalis Historia (or Natural History) which covered topics such as astronomy, mathematics, geography, ethnography, anthropology, physiology, mineralogy, zoology, botany, agriculture, pharmacology, mining and art history. But while this massive book was an important reference work for learned men for literally centuries, in Naturalis Historia we also learn dubious facts such as burying a toad in a jar will ward off diseases on a crop of millet, the ashes of toad mixed with grease is a good treatment for gout, and that sick pigs can be cured with water in which a toad has been boiled.

And it is also in this epic work by Pliny that we discover the root of a very common folk belief about toads - namely that their bones have magical properties. When writing on what he referred to as the rubetæ or bramble-frog (the Classical terms for toads) our seminal scholar notes that -

Authors quite vie with one another in relating marvelous stories about them; such, for instance, as that if they are brought into the midst of a concourse of people, silence will instantly prevail; as also that by throwing into boiling water a small bone that is found in their right side, the vessel will immediately cool, and the water refuse to boil again until it has been removed. This bone, they say, may be found by exposing a dead bramble-frog to ants, and letting them eat away the flesh: after which the bones must be put into the vessel, one by one.

However Pliny goes to to relate that after your ants have flensed your toad, don't chuck the rest of the skeletal remains away, for certain other bones have even more remarkable properties -

In the left side of this reptile there is another bone, they say, which, thrown into water, has all the appearance of making it boil, and the name given to which is "apocynon." This bone, it is said, has the property of assuaging the fury of dogs, and, if put into the drink, of conciliating love and ending discord and strife. Worn, too, as an amulet, it acts as an aphrodisiac, we are told. The bone, on the contrary, which is taken from the right side, acts powerfully as a refrigerative upon boiling liquids, it is said: attached to the patient in a piece of fresh lamb's-skin, it has the repute of assuaging quartan and other fevers, and of checking amorous propensities. 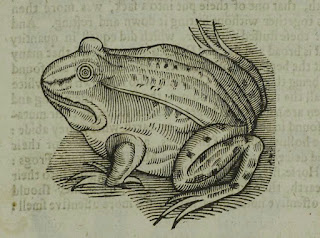 Now then, I'm sure you'll agree they sound like very useful bones to possess! Indeed over the years, right up until the present day, there is a continuing tradition of magical belief in the power of toad bones. What is most remarkable however is that these superstitions are clearly drawn from Pliny, albeit with some added embroidering over the centuries. For example, nearly all toad bone rituals follow the Classical lore in using ants to strip the flesh from the bones, and while the alleged properties of the toad bones do vary from place to place, they have remained generally consistent - namely that a certain part of the skeleton can cure diseases and/or give its owner the power to influence both people and animals.

And while Pliny rather unhelpfully doesn't specify which bone it was, over the centuries it seems plenty of folks thought they could find the right one! In some traditions a specific part  of the toad is identified, most often usually the pelvis or breast bone. However what is very interesting is that over time new stages have been added to the process to magically correct Pliny's vagueness. Hence after the flensing by ants, we have an additional rite whereby by the magical bones will be revealed, most usually by using running water. On a an alleged propitious night - new and full moons and various Saint's days are common - the bones were cast into running water and the magical bone reveals itself by floating up against the current.

Now here we can clearly see some deductive thinking at work. As Pliny mentions that the bone has the property of cooling hot water and boiling cold water, hence at some stage a prospective healer or magician reasoned that therefore given the magical bone's contrarian effects on water, it would logically float against a current and thereby reveal itself. Interestingly though, even in times and places where the local tradition identified which part of the toad skeleton was magical, the rite of immersing the bones in running water was still carried out, indeed in some areas the process of acquiring a toad bone was known as 'going to the river' or the rite of  'waters of the moon'. However in these cases, it seems that the act of immersing of the bones in running water was now seen as part of the magical charging of the resulting toad amulet -


Then take the bones and go down to a good stream of runnin' water at midnight an' throw the bones i' the stream. All the bones but one will go downstream, an' that one as wont go downstream is the breast-bone. Now you must get 'old of this 'ere bone afore the Devil gets it, an' if you get it an' keep it allus by you - in your pocket or wear it - then you can witch, as well as that, you'll be safe from bein' witched yourself


While the simpler versions profess to create a charm that is good against certain diseases and grants a power over animals - in English traditions usually over horses - as the above quote illustrates, where the method of acquiring a toad bone becomes more magically, more of ritual than a technical process, so too the reputed powers of the bone grow. While in the 16th and 17th centuries, English witchcraft thought to be dependent on the powers granted by familiar spirits and animals, in the 18th and 19th centuries magical prowess came from possessing a toad bone.

There was one charm she told me of witch was practiced when any one wanted to get command over there fellow creatures. Those that wished to cast the spell must search until they found a walking toad. It was a toad with a yellow ring round its neck, I have never seen one of them but I have been told they can be found in some parts of the Country. When they found the toad they must put it in a perforated box, and bury it in a Black Ant’s nest. When the Ants have eaten all the flesh away from the bones it must be taken up, and the person casting the spell must carry the bones to the edge of a running stream the midnight of Saint Marks Night, and throw them in the water. All will sink but one single bone and that will swim up stream. When they have taken out the bone the Devell would give them the power of Witchcraft, and they could use that power over both Man and Animals.

from I Walked by Night: Being the Life & History of the King of the Norfolk Poachers (1935)
edited by LR Haggard


Indeed being the holder of a toad bone amulet was so seen as being the key to possessing magical powers that in some areas folks possessing arcane knowledge and skills were known as toadsmen. In some cases, a toadsman was seen as a beneficial member of the local community, similar to horse whisperers or cunning folks: some one who could provided remedies against all manner of maladies, both natural and supernatural for people, livestock and crops. However in others these folks had a more sinister reputation, with toadsman being a byword for witch; indeed in the county of Norfolk casting spells was known as 'tudding', a corruption of 'toading'. And correspondingly the rituals had a darker nature too, as an old horseman called Albert Love recounted in 1966

While you are watching these bones in the water, you must on no consideration take your eyes off it. Do (if you do) you will lose all power. That’s where you get your power from for messing about with horses, just keeping your eyes on that particular bone. But when you are watching it and these bones are parting, you’ll hear all the trees and all the noises that you can imagine, even as if buildings were falling down or a traction engine is running over you. But you still mustn’t take your eyes off, because that’s where you lose your power. Of course, the noises must be something to do with the Devil’s work in the middle of the night...

Furthermore some traditions had additional rituals, to give the toadsman even greater powers. In East Anglia it was said that some time after acquiring the toad bone, usually five nights later, the toadsman would spend the night in a barn and call up the Devil, who he would then bind - presumably exercising the powers of influence in the bone - to his will. Interestingly in a call back to earlier English witchlore about familiars, the  pact or bargain with the Devil involved the toadsman offering up his blood. However the price of gaining such powers was high - as Nigel Pennick recounts in Secrets of East Anglian Magic (1995) the toadsman could expect all manner of infirmities, hallucinations and even a sudden death. So then, despite the alluring powers that having a toad bone amulet grants, perhaps it is best to leave the bones where they belong - in the toads.