FOLKLORE ON FRIDAY - Toads On the Whole 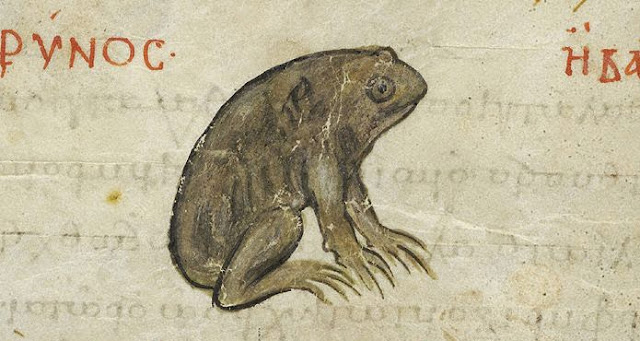 Late on Monday night a toad came into my study: and, though nothing has so far seemed to link itself with this appearance, I feel that it may not be quite prudent to brood over topics which may open the interior eye to the presence of more formidable visitants

MR JAMES, Stories I Have Tried To Write

The humble toad has often suffered from a somewhat bad reputation. While today many gardeners welcome the presence of a toad as they happily gobble up slugs and other pests, not that far back in history toads were considered bad news. Even in more recent sources from the early 20th century, folklore held that a toad entering the house signified an enemy nearby or that misfortune would come calling soon. A belief well illlustrated by our opening quote from MR James, first published first in November 1929.

However delving back further into older texts, we find a clear origin for this curious belief. In The History & Antiquities of Lyme Regis and Charmouth (1834) G Roberts tells us that -

Toads that gained access to... a house were ejected with the greatest care, and no injury was offered, because they were regarded, as being used as familiars by witches, with veneration and awe.

He had a heart to work but no strength... One evening on entering his door, he saw a great toad which he killed with a pitchfork, and threw into the fire. The next evening he saw another... and did the same... He believes they were witches. Soon he recovered, and has not suffered the like since.

Indeed as we have seen in previous articles on the English witch trials (see here) we have court records that alleged that witches possessed familiar spirits in the shape of toads that they sent out to cause ill. And evidently the sight of a toad remained ill-omened, in folklore at least,  long after the belief in witches and witchcraft dwindled away.

However the toad was associated with pestilence and poison long before the witch trials, and these beliefs evolved from biological rather than supernatural reasons. The  idea that toads are poisonous arises from their natural defences; most species of toad will secrete a substance that causes irritations to the skin to persuade predators to let the hapless amphibian go. And this was observed and documented by many ancient naturalists.

Now before the discovery of bacteria and viruses, diseases were thought to be caused by miasmas - clouds of diseased air. Damp or foul smelling places such as marshes, wetlands, dunghills, and caves were seen as prime sources of these poisoned airs. Now the medieval worldview operated on a 'like goes to like accordingly' philosophy, that is to say, things that were similar were somehow linked together. And hence it was thought that toads frequented marshes, sewers and middens in order to consume noxious humours and miasmas in order to create their poisonous secretions. As Shakespeare has one of his doomed heroes say -

I had rather be a toad.
And live upon the vapour of a dungeon


Indeed the toad was so closely associated with poison and disease that in ages past that the harmless animals were mistakenly thought to be venomous creatures. For example in Thomas of Monmouth's Life of St William of Norwich - whose modern edition was translated by MR James incidentally - it is said in the reign of King Stephen, who ruled from 1135 to 1154, that prisoners in dungeons suffered "enduring miserably cold, hunger, stench, and attacks of toads". While in the Second Continuation of Peterborough Chronicle, the entry for 1137 tells of the following dire fates for prisoners taken by King Stephen -

They were hung by their thumbs or by the head, and corselets were hung on their feet. Knotted ropes were put round their heads and twisted till they penetrated to the brains. They put them in prisons where there were adders and snakes and toads, and killed them like that.

However the medieval histories contain an even more horrifying tale. Giraldus Cambrensis, better known as Gerald of Wales, was a clergymen of Welsh and Norman descent, who wrote many chronicles and travelogues. He was also a keen naturalist and a good many of his writings feature descriptions of the habits of local wildlife. However like many ancient scholars, Gerald was prone to mixing fact with folklore, and hence in his 1191 tome, Itinerarium Cambriae or Journey through Wales, we get the following (hopefully fictional) dire events that befell a unfortunate young man whom he names as "Seisyll Esgairhir, which means Longshanks". Gerald tells the following troubling tale -

In our own days a young man who lived in this neighbourhood, and who was lying ill in bed, was persecuted by a plague of toads. It seemed as if the entire local population of toads had made an agreement to go to visit him. Vast numbers were killed by his friends and those looking after him, but they grew again like the heads of the Hydra. Toads came flocking from all directions, more and more of them, until no one could count them. In the end the young man's friends and the other people who were trying to help him were quite worn out. They chose a tall tree, cut off all its branches and removed all its leaves. Then they hoisted him up to the top in a bag. He was still not safe from his venomous assailants. The toads crawled up the tree looking for him. They killed him and ate him right up, leaving nothing but his skeleton.

Yes, I know! It's like a tale from an 11th century Guy N Smith paperback! And some people say history is boring!

Anyhow, what is particularly fascinating is the reason that Gerald of Wales proffers for this horrific attack by  flesh-eating toads. One might expect that an Archdeacon such as Gerald would obviously be asserting that witchcraft was the cause of this horrible unnatural death. However while belief in witchcraft was strong in Gerald's time, interestingly the general attitude of the church in that era was that witchcraft and sorcery were the product of superstition, and it would be another few centuries before witch-hunting became an obsession in England. 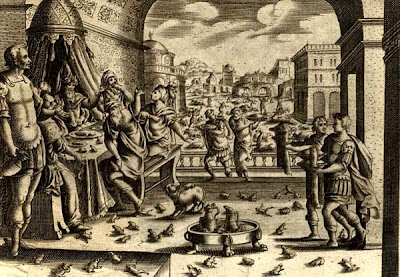 Now this was partly because the clergy in the first centuries of the second millennium were intelligent enough to realise that most claims of witchcraft were sorely lacking in evidence and rather preposterous. But it was also partly due to the then current theological thinking, which asserted that humans could not command such supernatural powers - there was only one fellow who could do that, the Boss Upstairs! And this was illustrated in scripture with the story of the plagues that the Lord inflicted upon Egypt. And appropriately enough for this article, the key passages for this argument concern a plague of frogs, as recounted in the book of Exodus. In order to demonstrate His power,  the Lord had Moses call up swarms of frogs from the Nile. The Pharoah's magicians then demonstrated that they too could make frogs appear but their conjuring could not get rid of the teeming amphibians. Hence the Lord instructed Moses to ask the Pharoah when he would like the bratchian plague to vanish, and so the beleaguered ruler named a date, and duly the Big Fella made all the frogs disappear. God 1, Pharoah 0.

Therefore being a theologian, and knowing his scriptures well, Gerald concluded that this toad horror death must be a judgement from God, and therefore just. Although he does concede "it is sometimes hard to understand". Gerald also mentions that he has heard of "another man was persecuted the same way by a large species of rodents, called rats" but that's a story for another day...

So then considering these medieval horror tales concerning toads, it's no surprise that, regardless of the association with witchcraft, you really wouldn't want a toad in your house to start with. I mean, they might not just poison you with venom but actually strip the flesh from your bones! However much like that other historically much maligned animal. the black cat, not all superstitions held that meeting a toad was ill luck. Indeed in some places it was said that a toad in the house or crossing your path was a sign of good luck to come. Furthermore despite their reputation for being noxious and toxic, toads were thought to possess some very useful properties. And hence as we will discover next week when we explore the various remedies derived from parts of toads, it was often very bad luck for a toad to cross your path... if you happened to the toad that is! 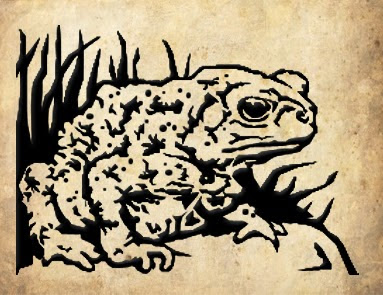 It's too bad that Giraldus' young man couldn't get himself to Ireland. In his "History and Topography of Ireland," Giraldus, grouping frogs and toads together as venomous animals, declares that neither they nor any other venomous creature could survive in Ireland. In fact, any being transported there would die as soon as they reached the Irish Sea. Thanks for your post!