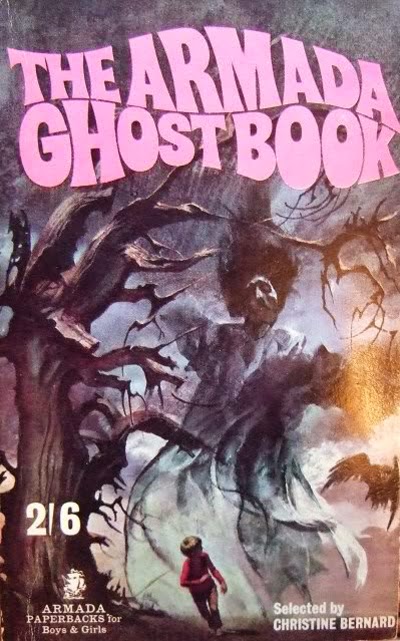 In 1967, this little anthology of spooky tales for younger readers, expertly assembled by Christine Bernard, was first published. And its mix of classic ghost stories, retellings of spooky folk tales, and new fictions penned by modern authors would prove to be a huge hit. Indeed The Armada Ghost Book would prove to be so successful that an entire series of Armada Ghost Books followed, with this initial book being reprinted many times to thrill and terrify several generations of children.

Sandy MacNeil and His Dog (1964) by Sorche Nic Leodhas
School for the Unspeakable (1937) by Manly Wade Wellman
The House of the Nightmare (1906) by Edward Lucas White
The Story of the Inexperienced Ghost (1902) by H. G. Wells
The Giant Bones (1964) by Sorche Nic Leodhas
Prince Godfrey Frees Mountain Dwellers and Little Shepherds from a Savage Werewolf and Witches (1946) by Halina Gorska
The Water Ghost of Harrowby Hall (1891) by John Kendrick Bangs
The Red Room (1896) by H. G. Wells
Spooks of the Valley (1948) by Louis C. Jones
The Lads Who Met the Highwayman (1965) by Sorche Nic Leodhas
A Pair of Hands (1898) by Arthur Quiller-Couch [as by Sir Arthur Quiller-Couch

Linked entries will take you to assorted Hypnobobs podcasts containing reading of these tales.