FOLKLORE ON FRIDAY - Of Piskies and Pasties Part I 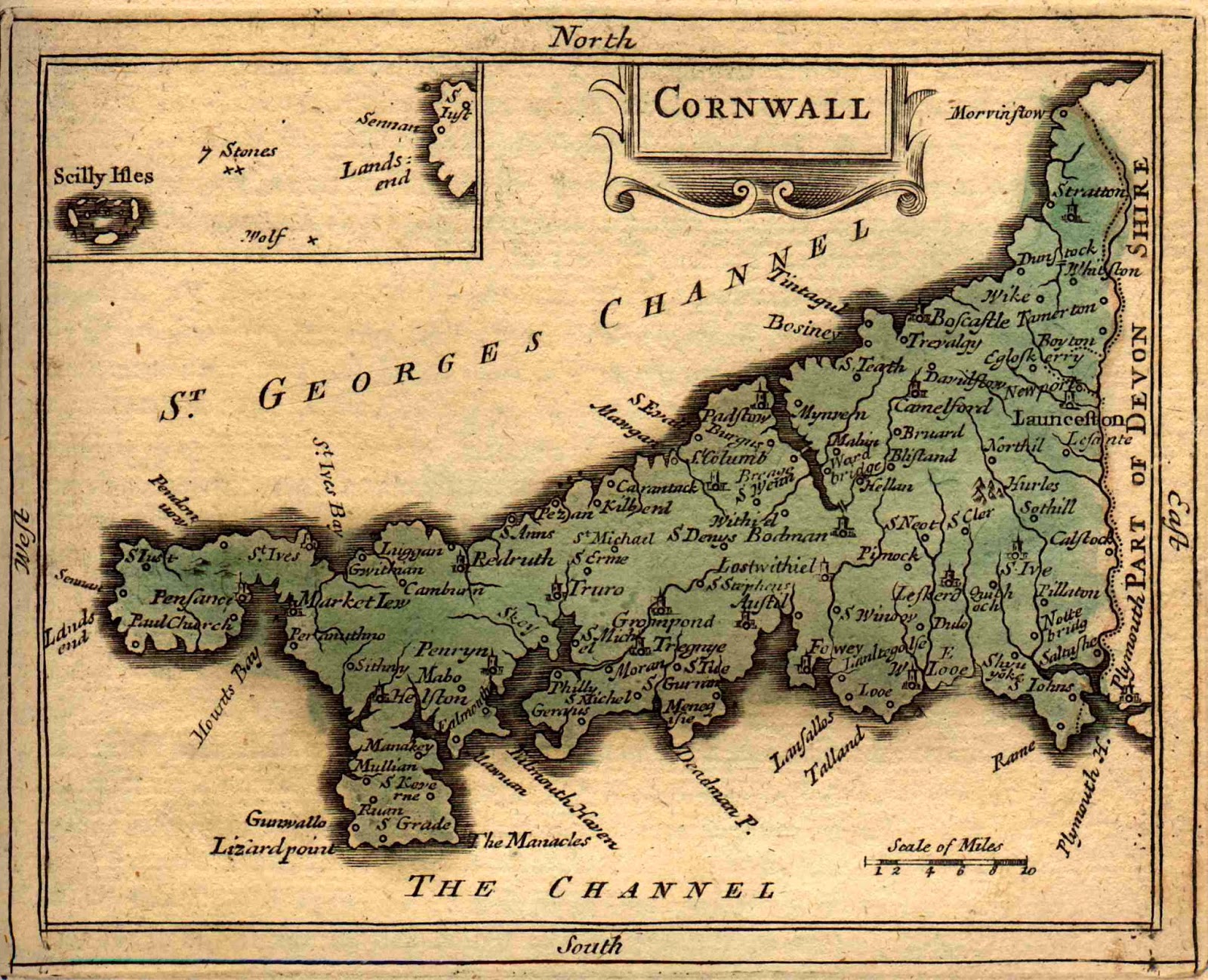 The ancient lands of Cornwall are steeped in myth and legend, brimming with tales of giants, saints, monsters and witches. And as is often the case, its folklore is often tied to its own geography, with tales, traditions and customs growing up around certain sites and areas. However folklore is full of surprises, and over the years, certain Cornish traditions have not only intertwined and given rise to new folk tales, but also have been successfully exported round the world.

Cornwall is famous for many things, and while folklorists treasure its wealth of faery lore, food lovers celebrate its most famous export, the Cornish pasty. And surprisingly despite seemingly being very unrelated, this pair have enjoyed a special relationship over the years. Now pasties have been appearing in historical documents, and even in ancient recipe books, since the 13th century. Likewise as long as there has been a Cornwall, there has been tales of the piskies, the local little people. However it wasn't until the 1800s, when tin mining became a huge industry in Cornwall that the two came together.

Now the pasties of centuries past had very much been a snack favoured by the rich, with early recipes having the pastry case being filled with fancy fare such as venison or fine fruits and berries. But in the 19th century, the dish became popular among tin miners, and hence the traditional Cornish pasty was born. Now the proper, traditional Cornish recipe has minced beef - the cut known as steak skirt to be exact - baked in a pastry case along with sliced potatoes and turnip, and lightly seasoned with salt and pepper. The filling is mixed, then packed still uncooked in a circle of pastry that is then folded over and the edges crimped together to form a long thick crust that runs the entire length of the pasty. It is said that a proper Cornish pasty is folded to make a semi circular shape, but vintage cooking tomes and pictures show that crimping up the crust along the top of the pasty is equally traditional. 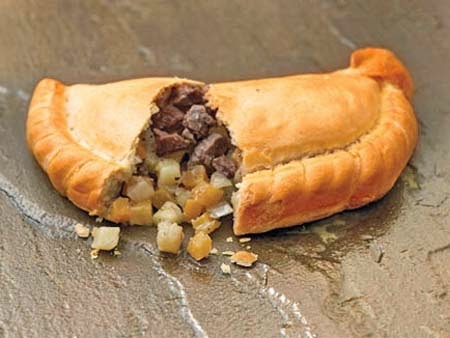 Pasties were not only cheap to make and but also made for a filling meal - effectively you got a full dinner in one handy pastry package. They were easy to carry down the mines, compact to carry on your person, and stayed warm a long time. And if they did get cold, they were easily warmed up on a shovel held over a candle, with the bigger mines actually having ovens down the pits to reheat the miners' pasties. Pasties very soon became part of mining culture and developed a folklore all of their own. Firstly is was said that the mark of a good, proper, well-baked Cornish pasty was that it could be dropped down a mine shaft and land without breaking apart.

Now there is no evidence to suggest that this was the usual delivery method of pasties at lunch time, however the popular call and response of "Oggie! Oggie! Oggie! Oi! Oi! Oi!" does come from dinner deliveries at the tin mines! The Cornish word for pasty is "hogen" which became "oggie" in miners' slang. Hence when the girls who worked on the surface, the bal maidens, lowered down a basket of pasties, they would cry "Oggie! Oggie! Oggie!" to let the menfolk know dinner was coming. And the miners would give the time-honoured reply of "Oi!Oi! Oi!" to let them know the pasties had been received and the basket was ready to be hauled up again.

Another tale about the pasty, that is often said to be culinary folklore but is actually true, is the traditional recipes that expanded the pasty into a two course meal. By means of adding a pastry partition, the canny Cornish folk devised a pasty that contained not just dinner but a dessert too! The bulk of the pasty would be the traditional filling of meat and veg, but a section at one end would contain a sweet of fruit, apple being a favourite. And a traditional family recipe for these ingenious two course pasties can be found here. Also there is an attendant piece of lore attached to this inventive practice - it was commonly said that the enthusiasm for pasty making and experimenting with the recipe was so great, that the Devil himself was afraid to set foot, or rather hoof, over the River Tamor and cross from Devon to Cornwall for fear of ending up the filling in a Cornish pasty!

Other legends have grown up around the pasty crust itself. It is often claimed that the thick hard ridge of pastry formed a useful handle to eat the pasty with, negating the need to bring knives and forks down the mines. Furthermore it has been claimed that as mining tin often brings up arsenic, the tradition of not eating the crust spared many a miner from a bout of poisoning. Modern pastyologists however have cast doubt on this belief however, citing pictures and photographs of tin miners eating their pasties from end to end and hold them in paper or muslin bags. 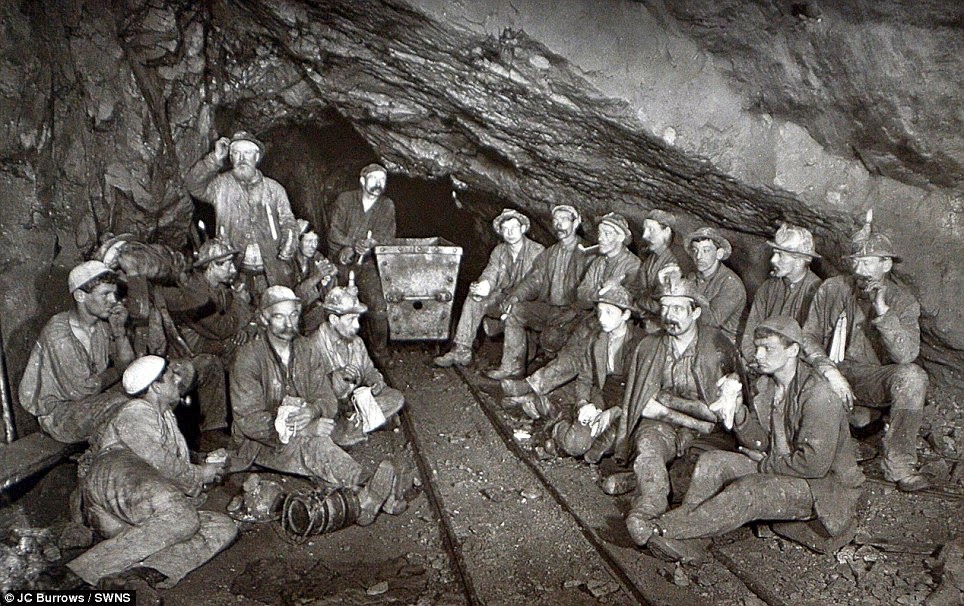 Photo from 1893 showing tin miners eating their pasties in bags

But aside from these modern theories about avoiding arsenic poisoning, there is an older tradition regarding not eating the crusts. For while Old Nick may have had a fear of pasties, other supernatural beings were said to have a taste for them... and we will discover more about these fellows next week!